From derelict fortress to stunning home: inside the ultimate castle renovation

The resurrection of a historic building 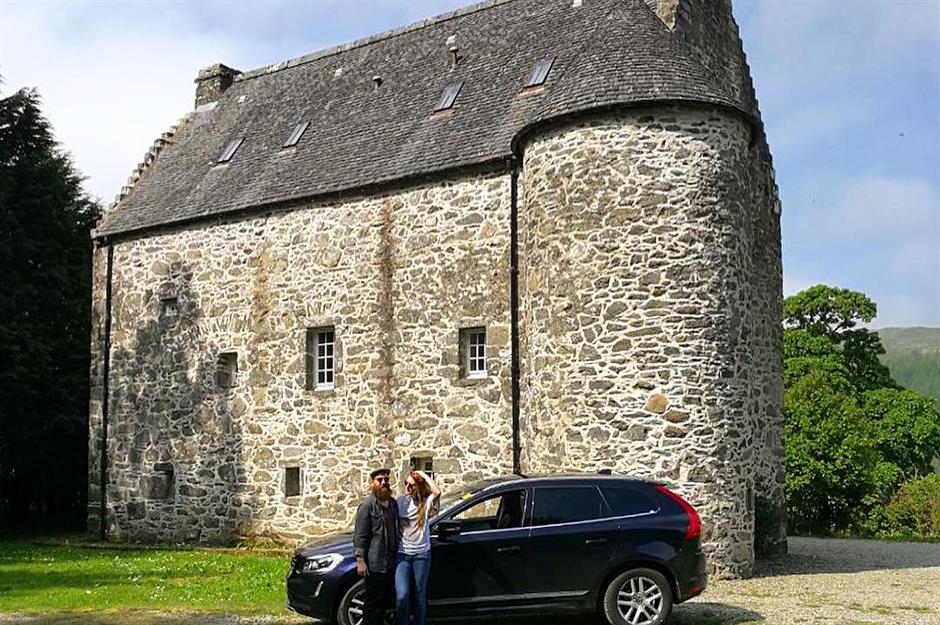 @kilmartincastle / Instagram
When married couple Stef Burgeon and Simon Hunt grew tired of the Dubai lifestyle, they went on a quest for a new home. Little did they know it would come in the form of a rundown fortress. In just over seven years since they set their sights on Kilmartin Castle, they have transformed it into a stunning property. Click or scroll to see inside... 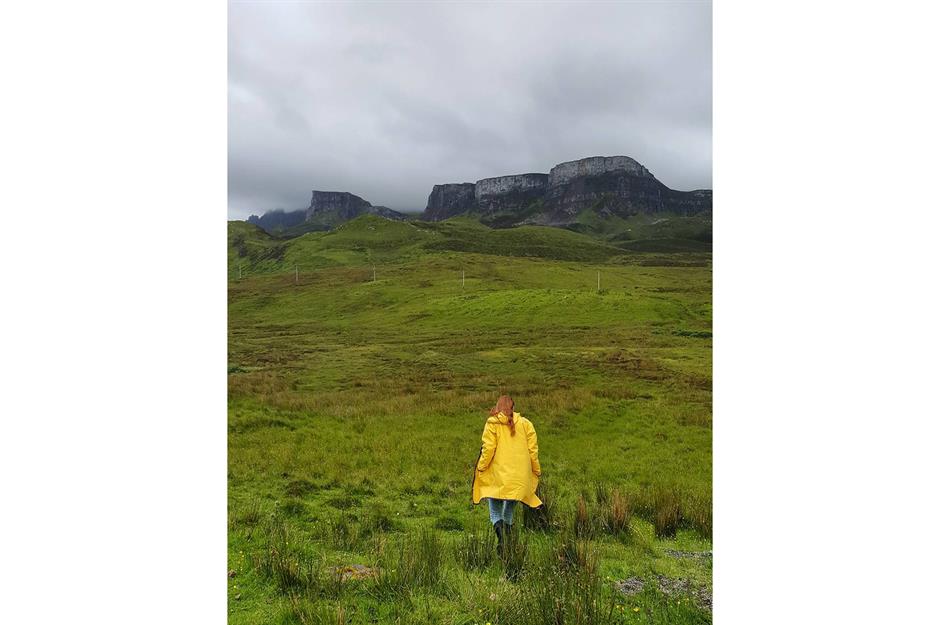 Stef, a travel journalist, and Simon had been living in Dubai for a decade when they embarked on a holiday to Scotland that changed everything in 2014. They fell in love with the country – despite the weather. "Everyone said it would be awful, but we thought 'if we love it in January we will always love it'," says Stef. After returning, Stef spotted a listing for Kilmartin Castle, a 16th-century historic home around 95 miles from Glasgow.

How much for the castle? 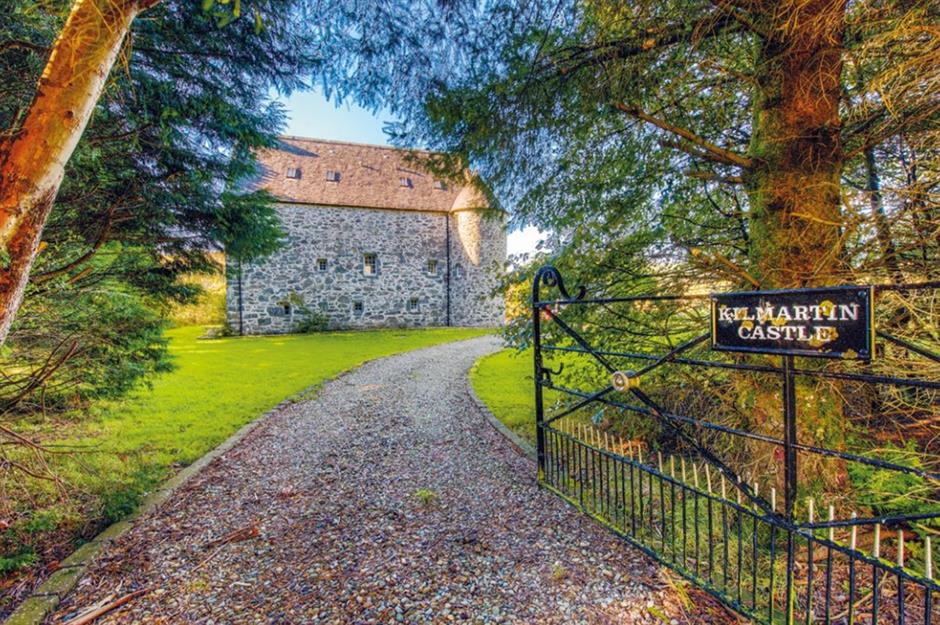 On the market / Knight Frank

Kilmartin Castle was on the market for offers over £375,000 ($517k), however, with not enough money to buy the building outright, the pair had to spend over a year acquiring a loan to buy it, putting the rest on credit cards. Eventually, they put in an offer for £331,780 ($457k) and secured the castle as theirs. 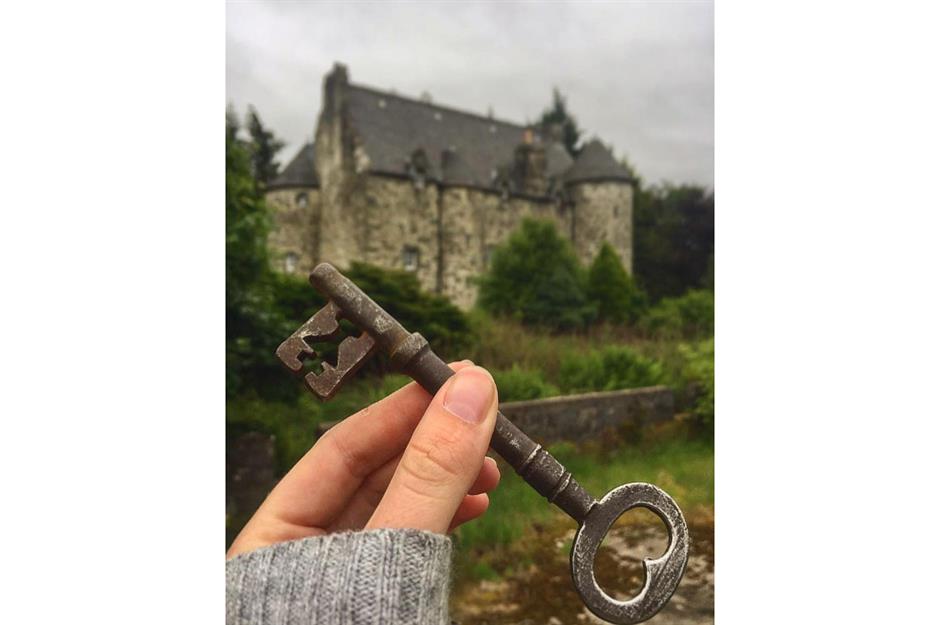 Kilmartin Castle was built in 1550 and had stood empty for 10 years before it was finally put on the market. After getting their hands on the heavy old key, Stef and Simon spent seven years transforming this ancient building into a cosy retreat and luxury bed and breakfast. Let's take a look inside... 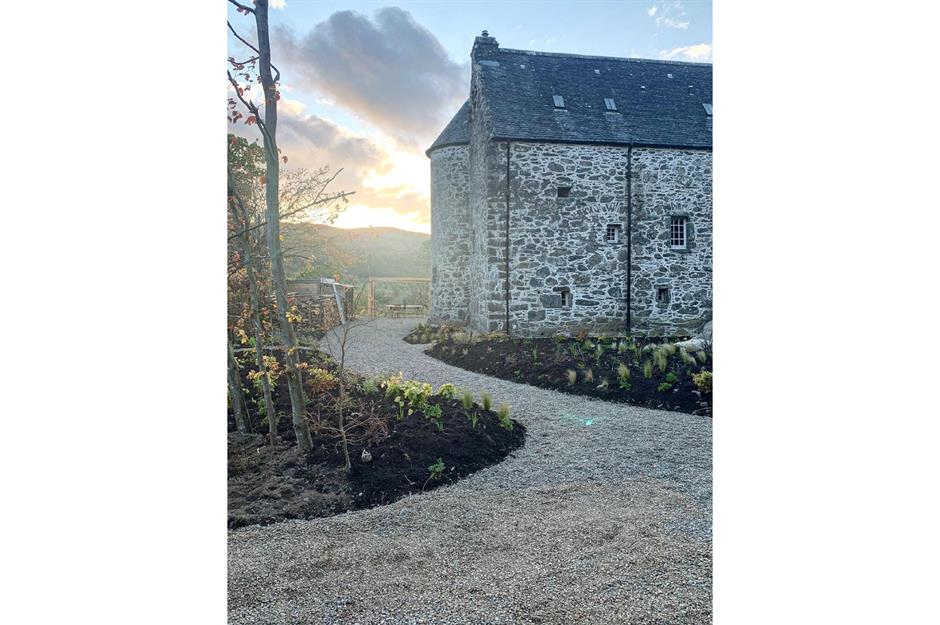 Still living in Dubai, they came to Scotland for two weeks and did a quick renovation to try and claw back some funds through short-term rentals. "We did a very basic refurbishment and put it on Airbnb. It would make enough money to cover the bills, but every now and then something would happen that would cost a fortune and the last straw was getting an electricity bill of £12,000 ($16.5k). So at that point we decided to leave," says Stef. 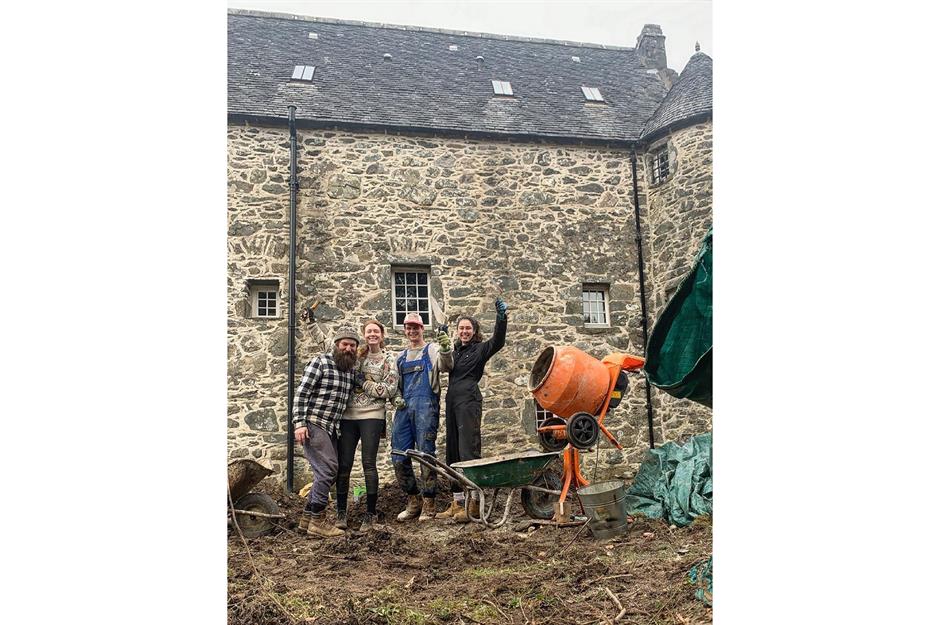 After working for four years to pay off the credit card bills and save up a nest egg, the pair quit their jobs and spent six months travelling Europe and collecting things for the renovation. In January 2019, they finally broke ground on what was to be a big renovation project. Here they can be seen repointing the exterior of the abandoned castle with the help of some friends. 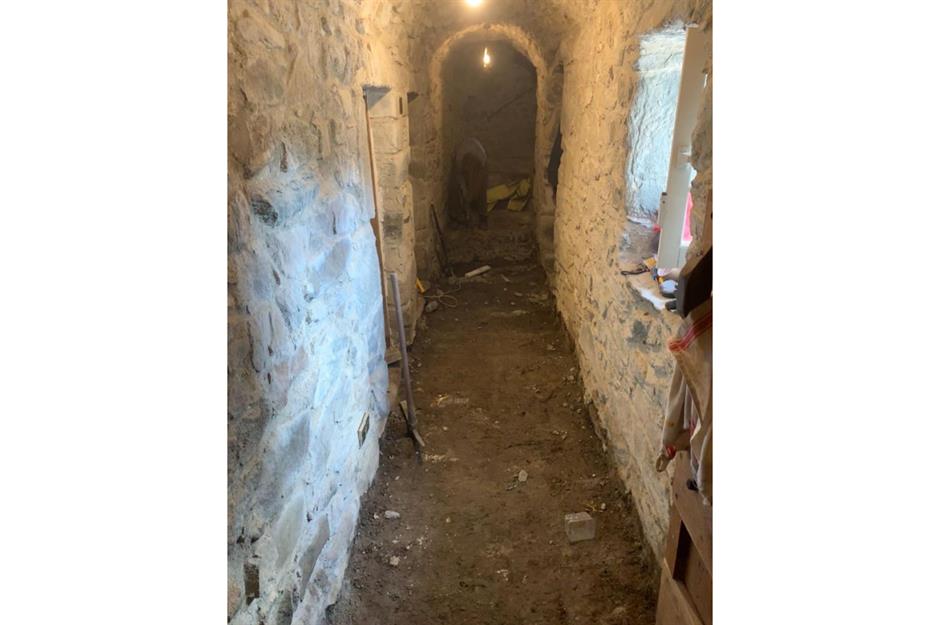 Modernisation was one of Stef and Simon's main goals but it exposed plenty of problems. With damp patches appearing on the ground floor, there was no option but to lift up some of the original flagstone tiles and see what was underneath. "We discovered that the people who renovated it in the 1980s used hundreds of fertiliser bags to stop damp, which were leaking," says Simon. So what was the next step? 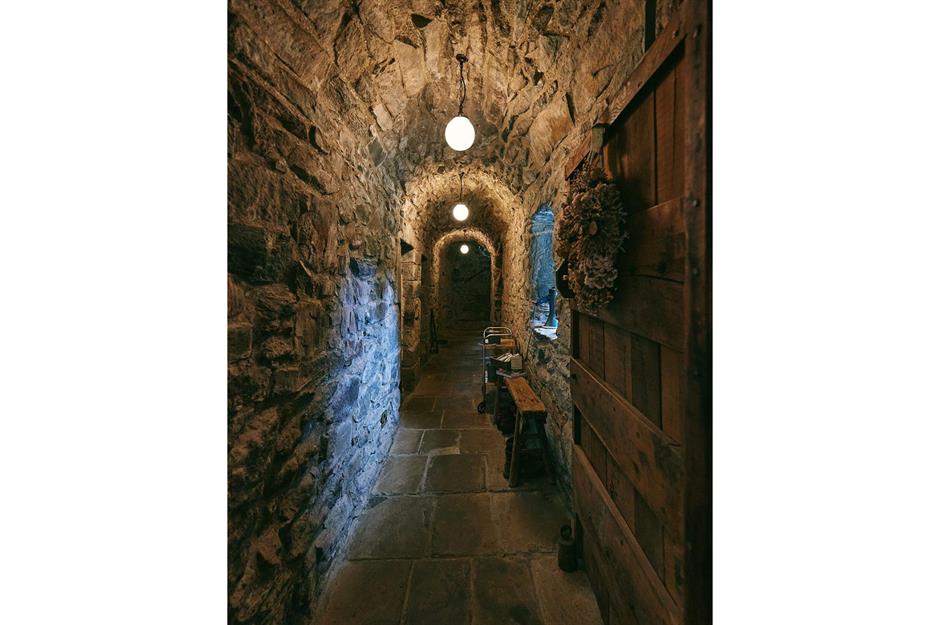 On their builder's advice, the couple mapped out and numbered the original flagstone tiles, taking eight weeks to lift them up. They then dug a foot down into the ground and installed modern insulation and underfloor heating, before relaying the floor. "Now it's so cosy and warm all throughout the year and it feels more like a castle than it ever was. It was one of the best things we’ve ever done," says Simon. 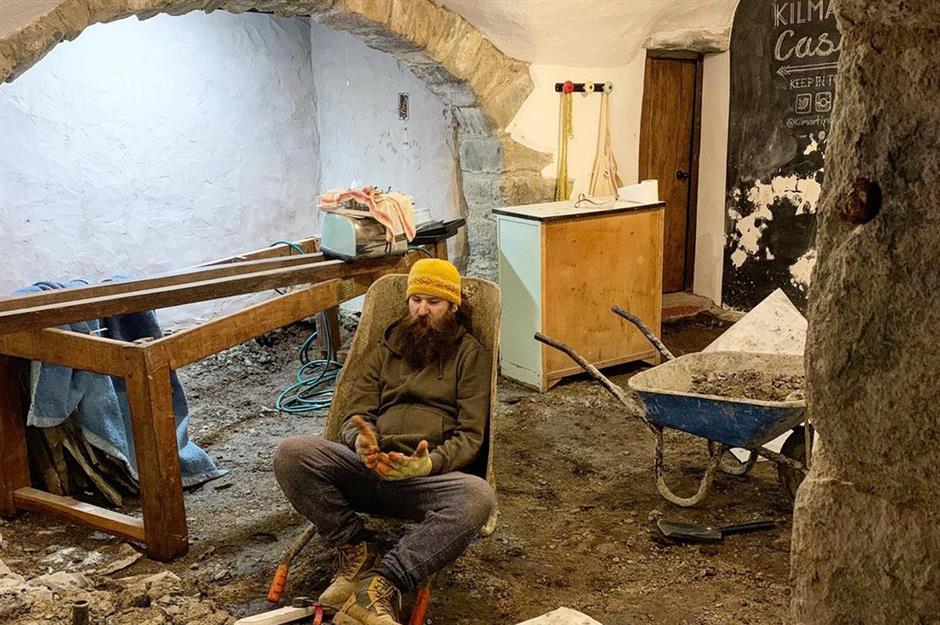 The kitchen, which is also on the ground floor, was also a huge project during the renovation. When they arrived it was in desperate need of an overhaul. There was a huge original fireplace that would have been used to cook food over an open flame, but to cater for their guests they needed something more modern. 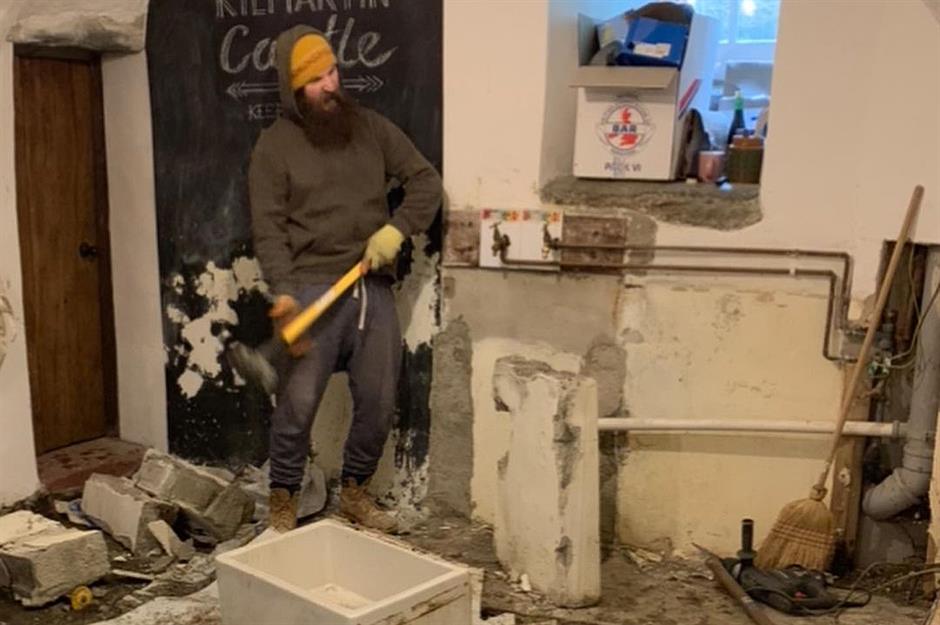 @kilmartincastle / Instagram
On the lower floor, Stef and Simon had to keep the footprint of the current rooms, so had to work with what they had. Taking some innovative steps to turn a crumbling kitchen into a foodie haven took some serious thought. 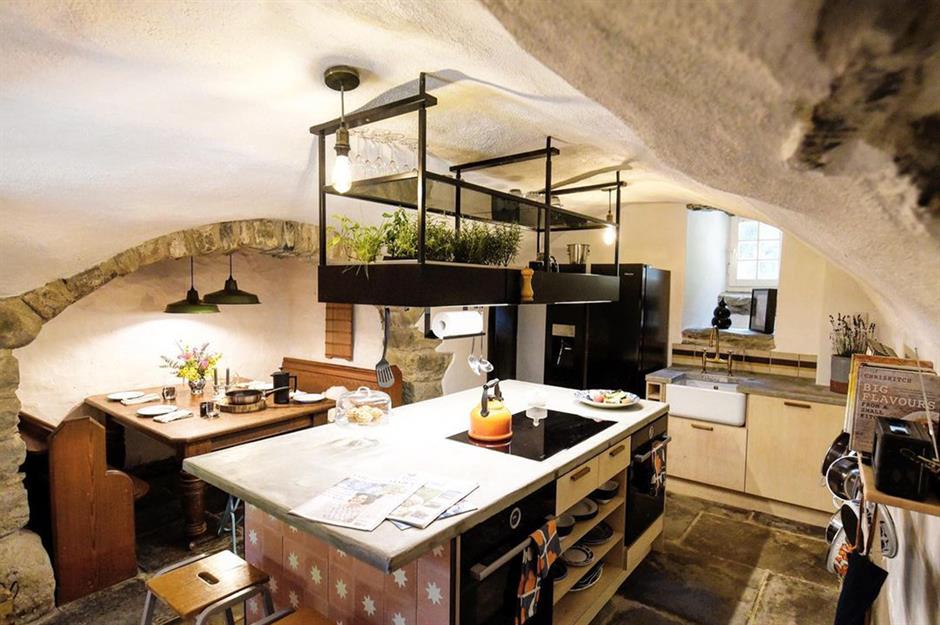 With advice from an architect to leave the walls as untouched as possible, the new kitchen design features a central island that houses two ovens and a suspended herb garden, while the old fireplace was replaced with a seating booth for eight people. "The chairs are reclaimed from a local church and the table is from an old pub," says Simon. 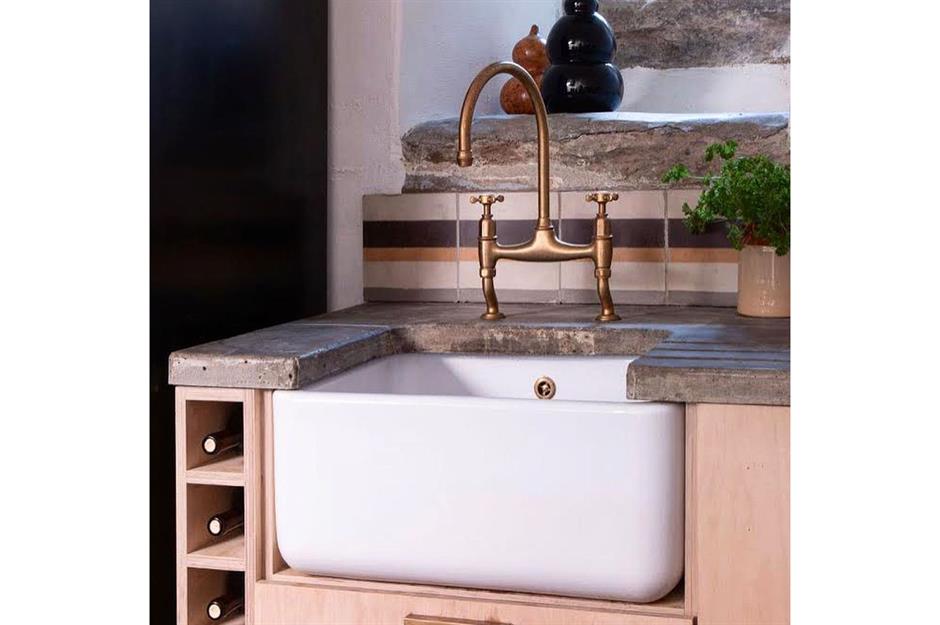 The new sink area, which is still in the same position as before, is housed in a birch plywood cabinet with concrete countertops. Giving a modern vibe to the medieval-style room, it's both perfectly practical and a lovely space for the couple to host their guests.

Out with the old, in with the new 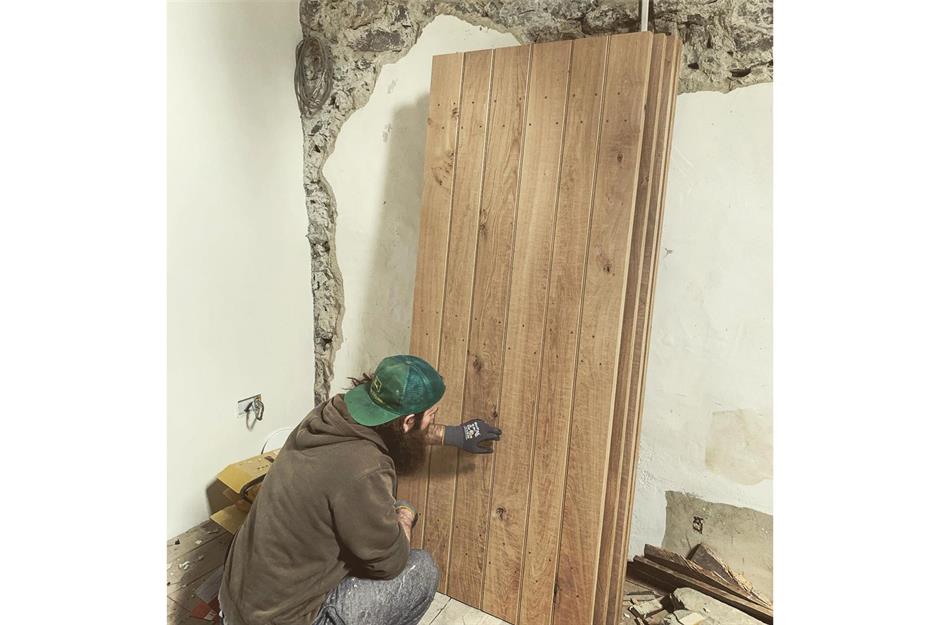 Renovating a 400-year-old building came with some difficult decisions; how best to maintain historic integrity while ensuring the safety of their guests? Finding appropriate fire doors proved a huge challenge and the couple were told that the traditional doors they wanted didn’t exist. Refusing to compromise, they stumbled across the company Broadleaf Timber who had made the doors for the castle at Disneyland Paris. They were able to get bespoke doors ready within three weeks. 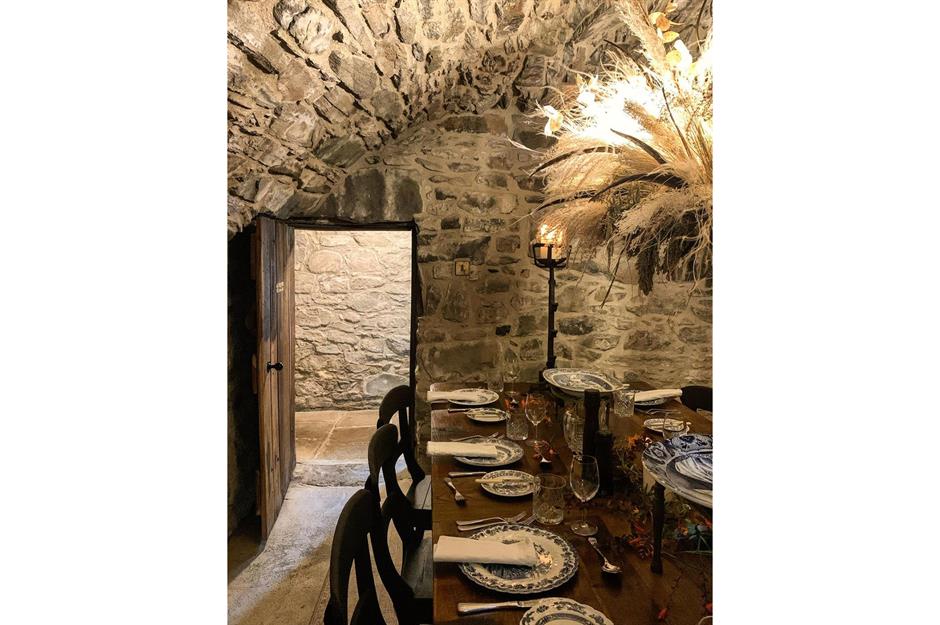 Stef and Simon also saved money by upcycling old items. The dining room, which just had some cosmetic changes, also houses a piece of furniture from the old owner. "It was always a bit short and too narrow so during a lockdown, we added a big strip in the middle both ways. So it's still his table but we’ve just developed it to make it a bit bigger," says Stef. 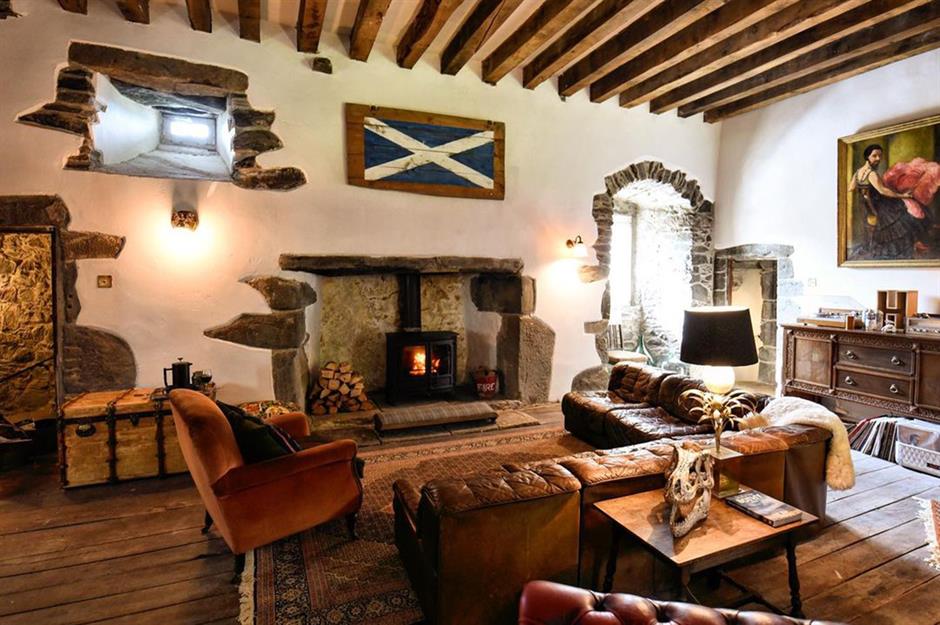 The grand hall, which sits on the middle floor, is one of the couple's favourite rooms. "We rubbed the walls back and repainted the lime plaster, which was still really good," says Stef. The fireplace was a mystery for six years. "It was the sort of room where you'd be sitting in front of the fire with your coat on going 'why is it still cold?'," says Stef. After seeking advice from numerous experts, they eventually realised that they had to extend the chimney.

Art with a story 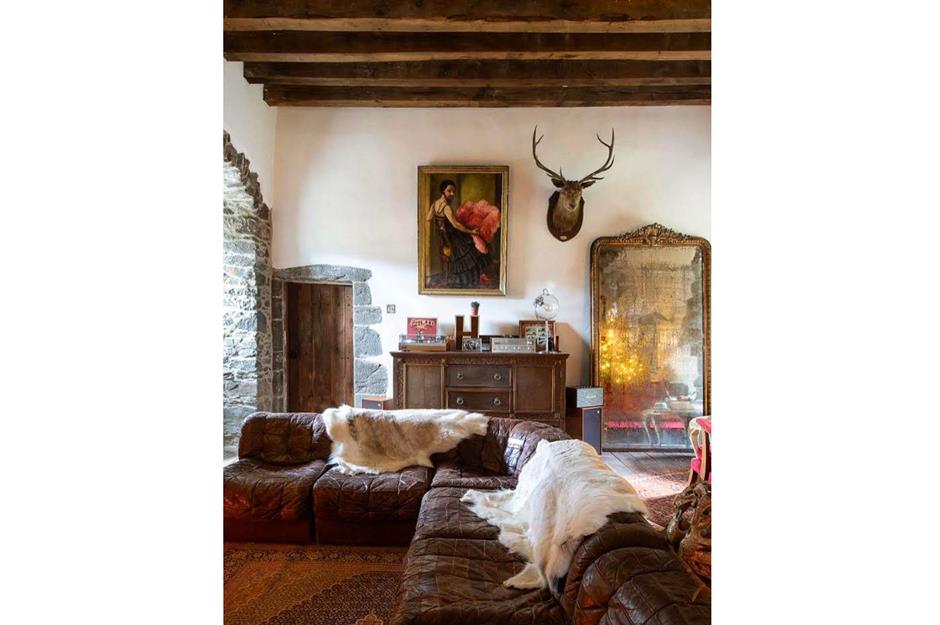 The stunning space is also home to the couple's favourite painting; a portrait of a bearded lady. Damaged during the renovation, it was sent off to a restorer who uncovered its fascinating history. Painted in 1932 by Helene Detroyat, it was in fact revealed that the beard was added in the 1960s, but who painted it remains a mystery. 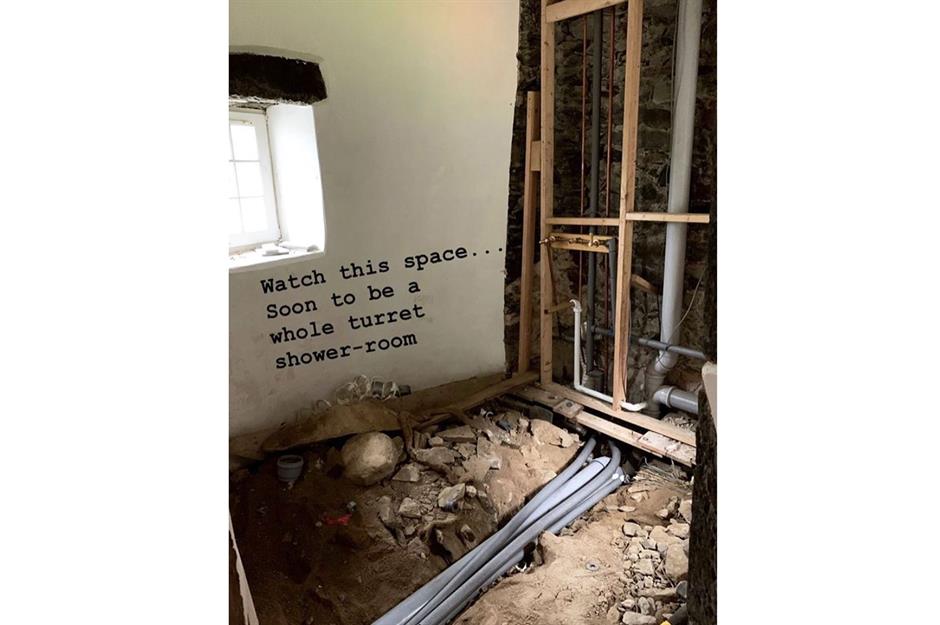 With a total of five bedrooms throughout the castle, there are three brand new ensuite rooms on the upper floor. Located in the turrets, the bathrooms have also been completely overhauled. " The castle had disgusting carpet everywhere that was mouldy and it even had carpet in the bathroom underneath the bath. We basically just ripped out the carpet to reveal the floorboards," says Simon. 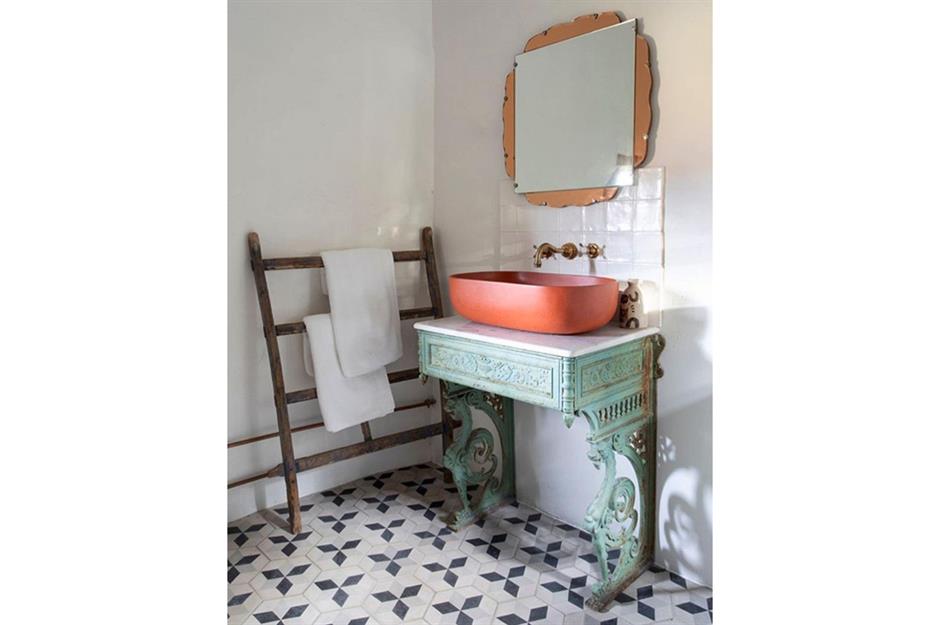 Today, the bathrooms are unrecognisable. In this space, the design was centred around the mint green washstand that Stef and Simon picked up in Nice, France. Almost 200 years old, they paired it with a statement terracotta sink and monochrome floor tiles. 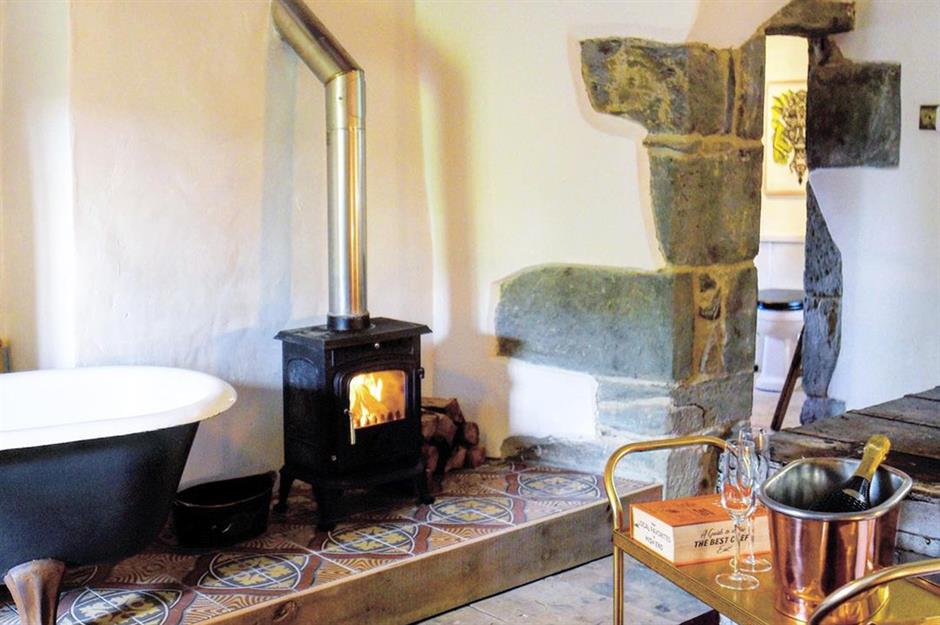 As the project managers, Stef and Simon were constantly making difficult decisions on fixtures and fittings and doing the unskilled jobs that no one else wanted. "We were on site every day. I had to carry all the bathroom tiles, which were concrete, up two floors – it rubbed my fingerprints off, it was so hard!" says Stef. But it looks like the hard work was well worth it!

During the first UK lockdown in March 2020, Stef and Simon decided to undertake a series of one-day projects to touch up the work that had already been done. This cosy nook quickly went from a rough sketch to a real-life vision. Made up of broken castle floorboards and part of a pew from a local church, it helps to showcase the rustic style peppered throughout the castle. 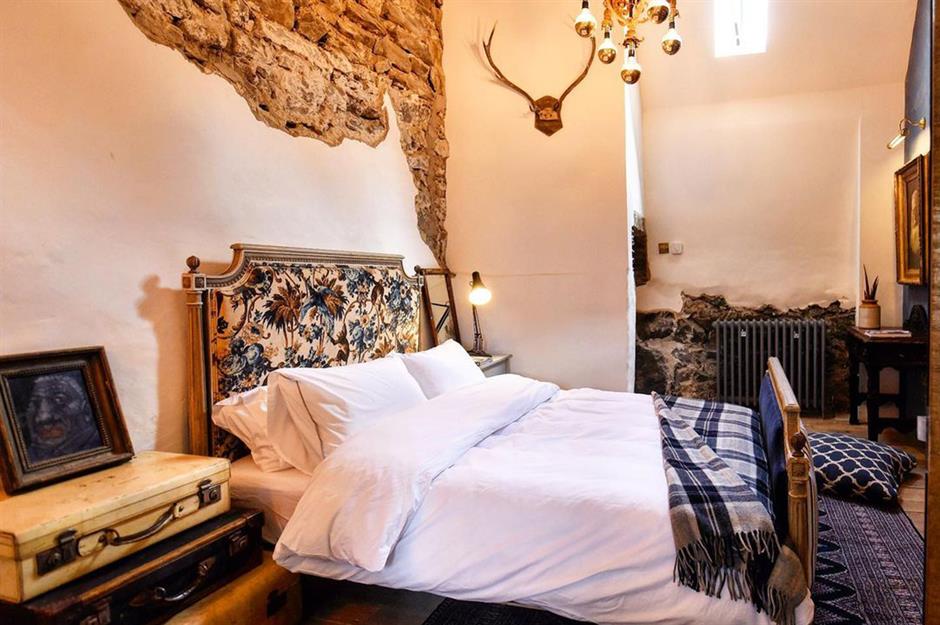 When the couple first arrived at the property, the upper floor was in a dire state. It had just one bathroom for the whole castle, and the bedrooms needed an overhaul to make them fit for guests. Blending old and new in this bedroom, the feature wall exposes the original stone from beneath the lime plasterwork.

A small room with a big past 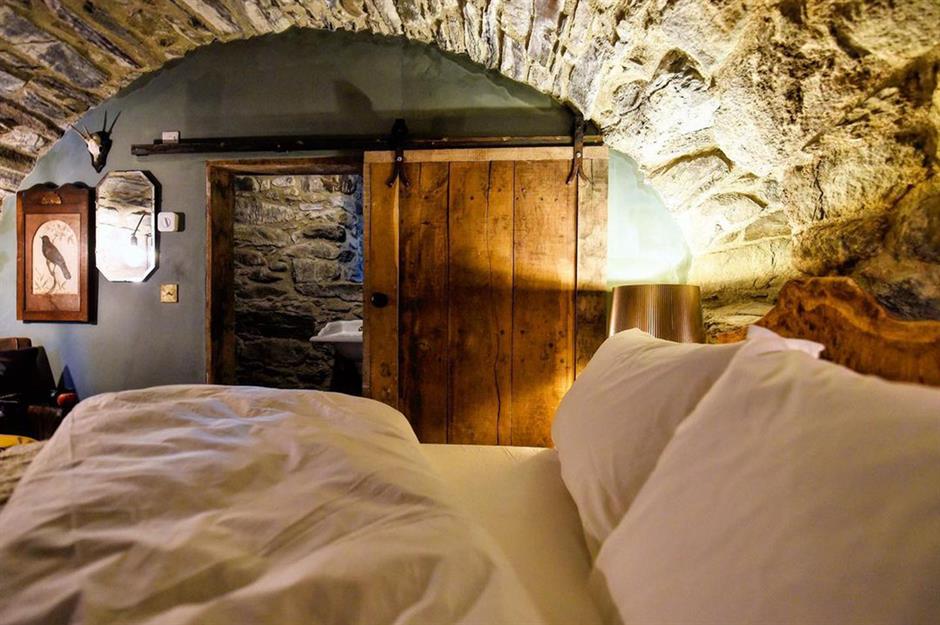 Another of the bedrooms, The Snug, still has its original barrel-vaulted ceiling from when the castle was built in 1550. Originally a storeroom on the ground floor, it's now a cosy space just waiting for guests.

Renovations at the right time 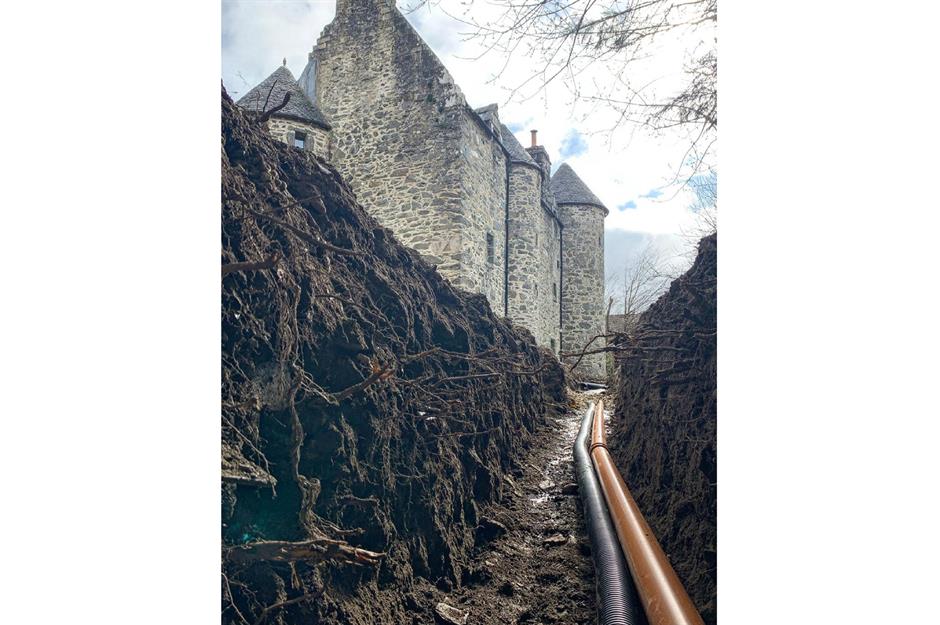 However, things didn't always go smoothly. "When we did the first renovation we had put in a damp proof course on the ground floor. And with the ground level outside being higher than the inside, the water had just gone around the sides of the building," says Stef. "The very last guests were walking out the front door as the water was coming in, which was lucky timing!" explains Simon.

A castle and a moat 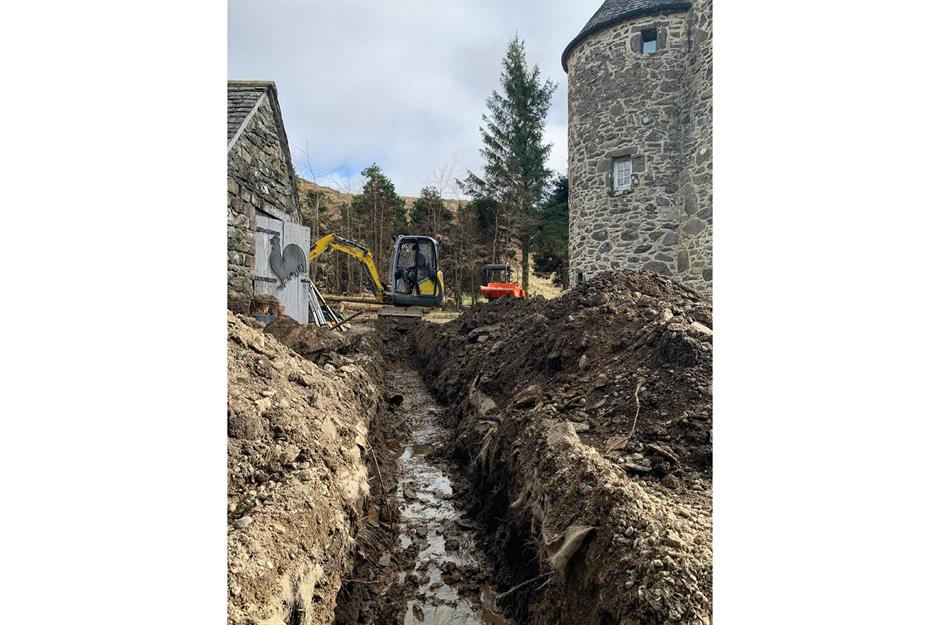 @kilmartincastle / Instagram
Thinking they'd be finished in August 2019, the couple were forced to dig trench drains that they filled with gravel, to lead the water away from the kitchen after it flooded. They discovered that the castle had no foundations, but was built on huge footing stones which were sitting directly on the bedrock. In fact, these were so sturdy that the cattle had only subsided by around 60mm over a 400-year period. 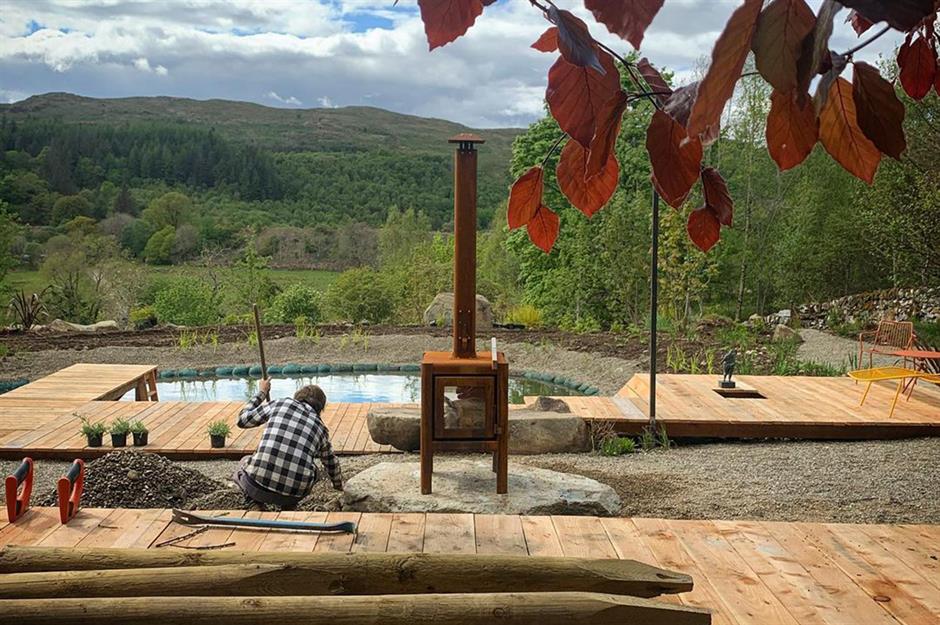 After digging the trenches they figured that there was no better time to start their garden project on the acre of land surrounding the property. However, with little horticultural knowledge, the couple called upon local garden designer, Amber Goudy to help design their dream outside space. 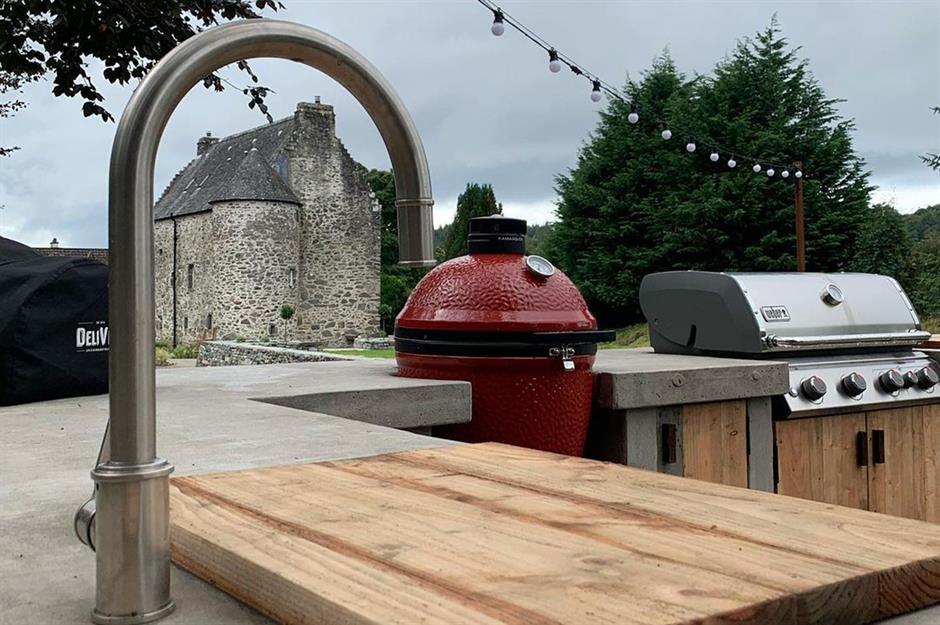 Stef and Simon had a few non-negotiables for the garden, one being the outdoor kitchen. To save running from the indoor kitchen when they were hosting outside, they decided to install a sink with a hot water tap and a bin, meaning that they don't have to carry everything back and forth. 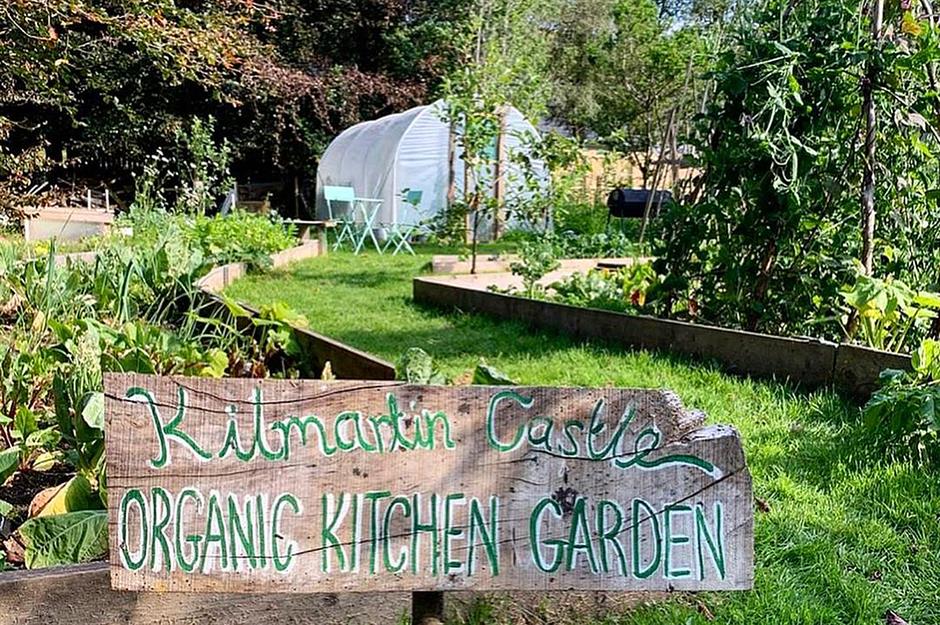 As well as luxuries such as the outdoor kitchen and firepit, the couple also went back to basics with a castle garden. Describing it as like having a personal greengrocer, it means that they can feed their guests with delights such as shredded cabbage and onion hash-browns and caramelised roasted beetroot frittatas. 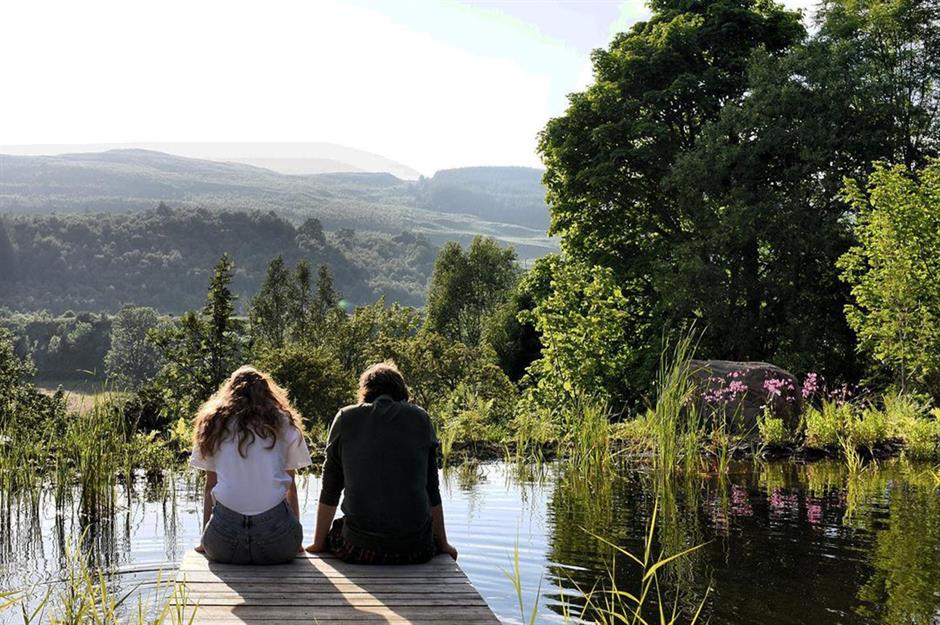 @bill_baillie ; @kilmartincastle / Instagram
They had always wanted a wild swimming pond but struggled to do it within their budget. With the help of Amber, their wishes finally came true. "I love the wild swimming pond and looking back towards the castle. It looks like a fairytale," says Stef. 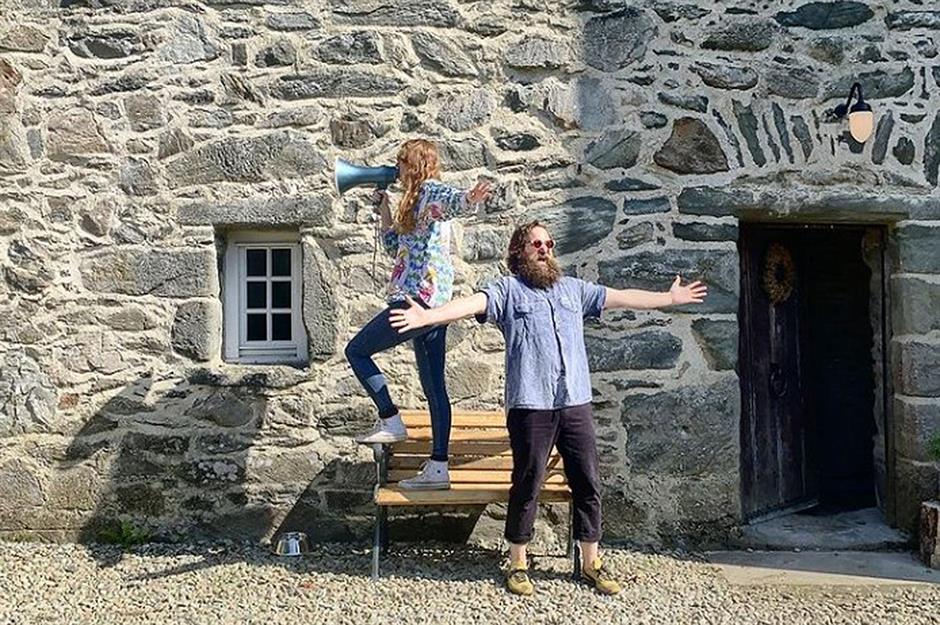 Stef and Simon are now close to finishing and have spent around £400,000 ($551k) on the renovation. With the garden being their last project, they are just waiting on some trees to arrive for the orchard. It looks like their dream is about to come true!