The Whitney Museum founder's studio is a work of art 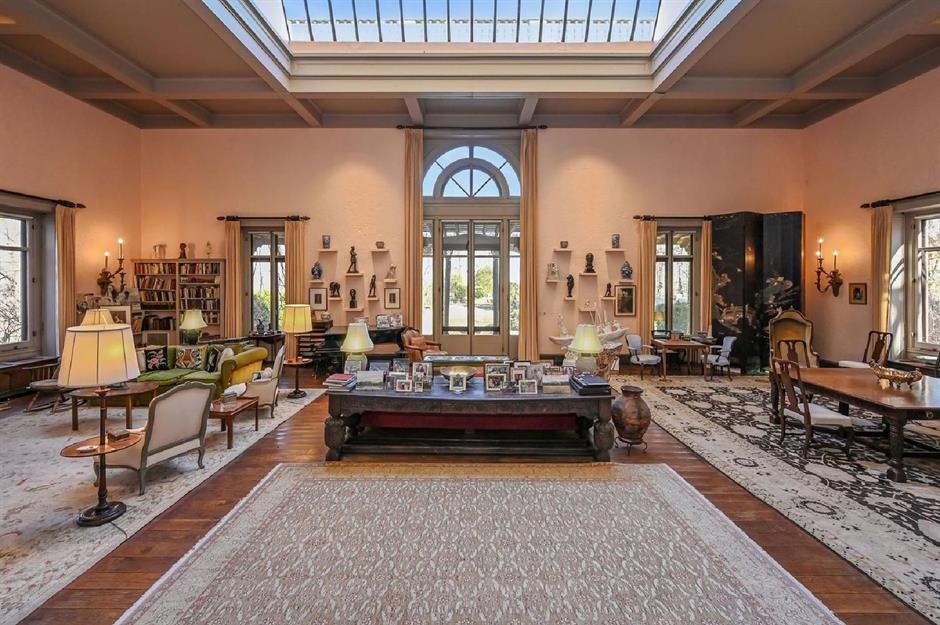 Once a hub of creativity and the scene of countless dazzling parties, the historic former art studio of railroad heiress and Whitney Museum founder Gertrude Vanderbilt Whitney is on the market with Douglas Elliman for $4.75 million (just over £4m). Located in the grounds of the family’s thousand-acre Old Westbury estate on the North Shore of Long Island, the property epitomises the grandeur and glamour of the Gilded Age, when the Vanderbilt family were considered American royalty.

A woman of substance 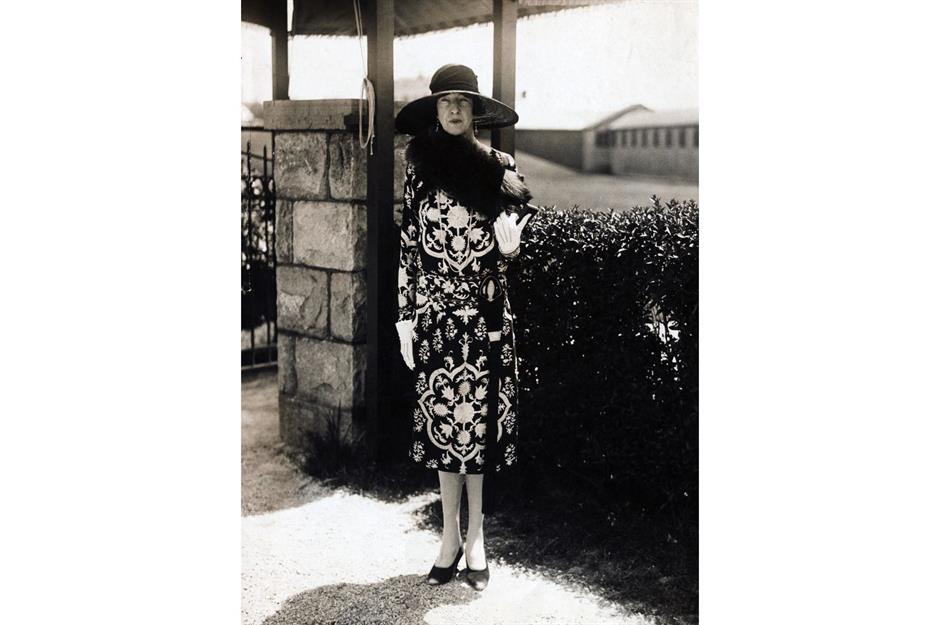 Bettmann/Getty Images
Born in 1875 into the wealthiest family in America, Gertrude was the great-granddaughter of the railroad magnate Cornelius Vanderbilt and the wife of sportsman and race horse owner Harry Payne Whitney. Unlike most Vanderbilt women, Gertrude had a successful career as an accomplished artist and sculptor. She also had her own money, courtesy of her father, who left the family fortune to her rather than her brothers, highly unusual in 19th century New York.

An accomplished artist and sculptor 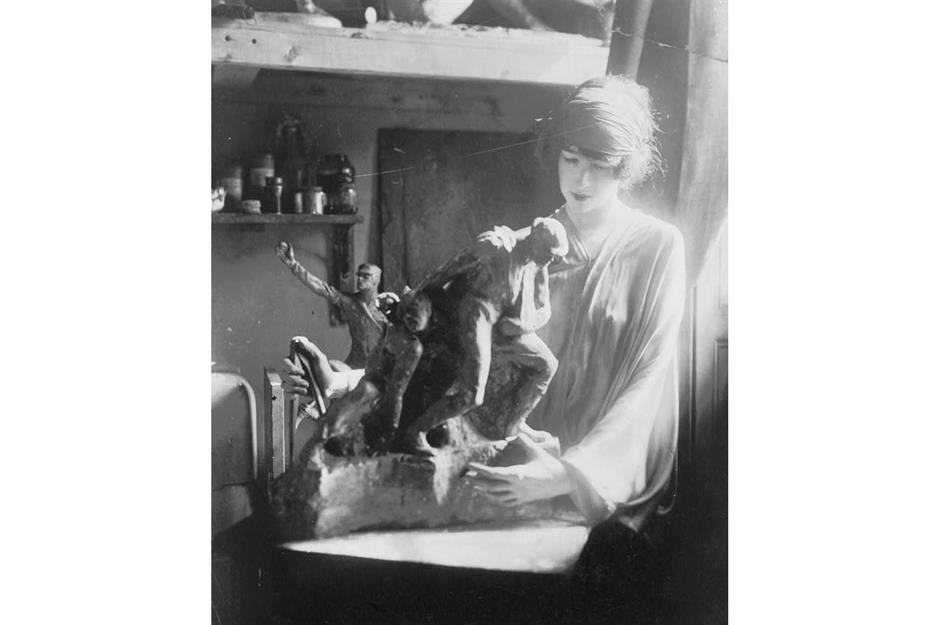 A generous patron of the arts, Gertrude was an accomplished artist and sculptor in her own right, who studied with Auguste Rodin in Paris. She described her sculptures as “emotions gouged from clay”, and is best known for her creations the Titanic Memorial (1914–31) in Washington, the Victory Arch (1918–20) in New York and the Christopher Columbus memorial in Huelva, Spain.

Founder of the Whitney Museum of American Art 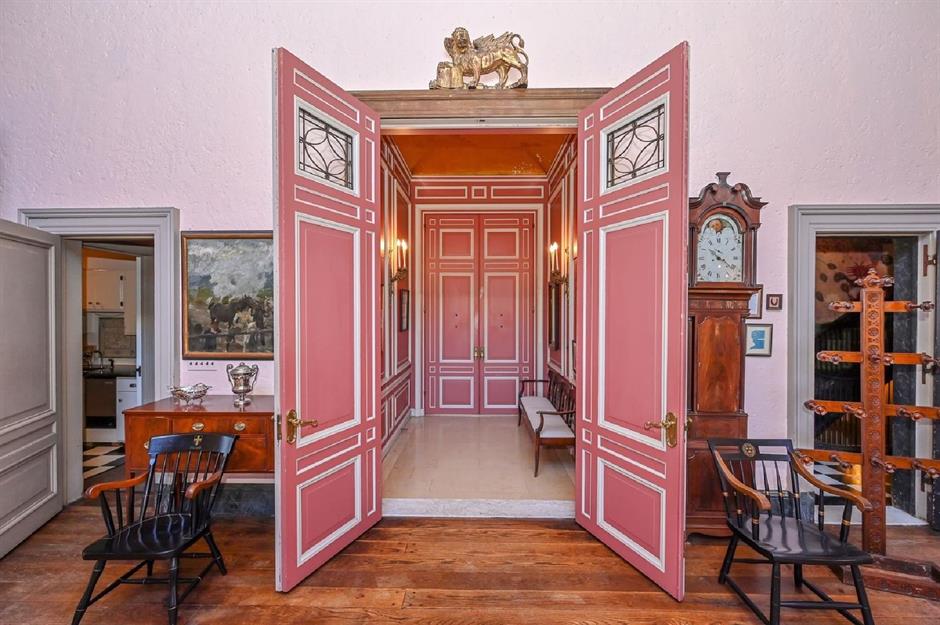 Beyond her own work, Gertrude's legacy lives on at the Whitney Museum of American Art, the institution she founded in 1930 after the Metropolitan Museum of Art rejected her offer to donate over 500 pieces from her personal collection to put on display. Her former studio is also testament to her love of the decorative arts with its lavish interiors and echoes of bygone glamour.

A place to work and play 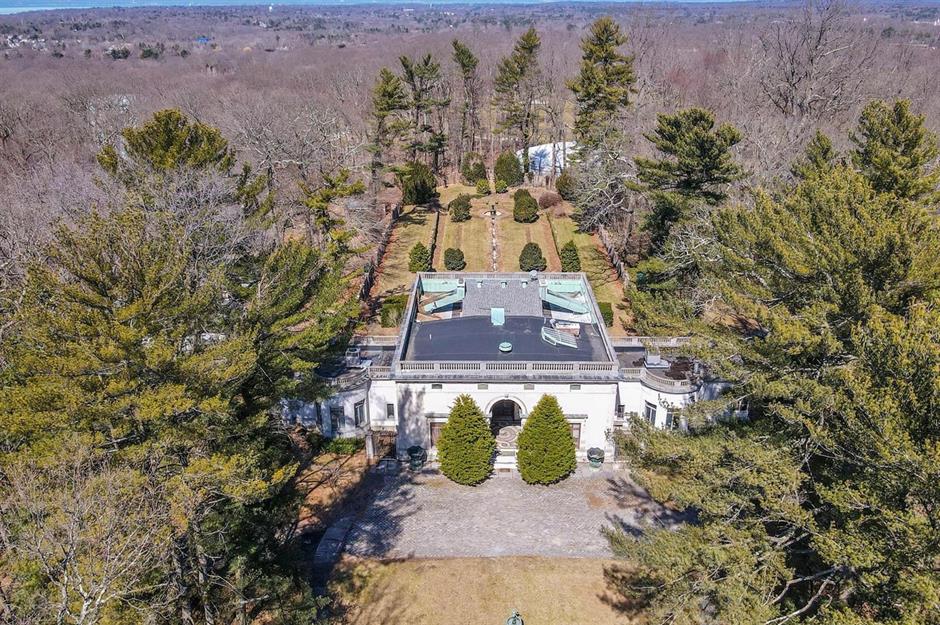 Nestled in formal gardens and reminiscent of an Italian villa, society architects Delano & Aldrich completed the studio in 1912. A weekend getaway and a place for Gertrude to work, the property sat empty and neglected for over four decades following her death in 1942. Fortunately, Gertrude's granddaughter, Pamela LeBoutillier, transformed it into a five-bedroom home for herself and her two children, who are now selling the unique estate. 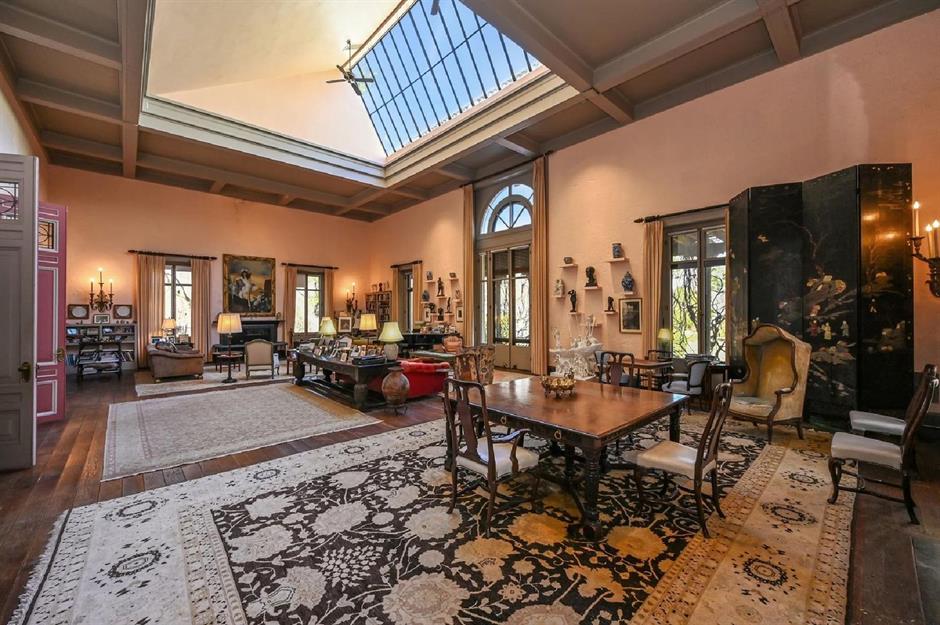 The LeBoutilliers left the interiors virtually untouched, converting the central workspace into a living and dining room (above). Details like the pink walls, hand-wrought iron decorative screens and north-facing skylight remain intact. “She loved it over here,” Mr. LeBoutillier says of his mother Pamela. “She saw the potential to bring it back to the way it was. I guess she remembered it from her youth.”

A shrine to a Gilded Age heiress 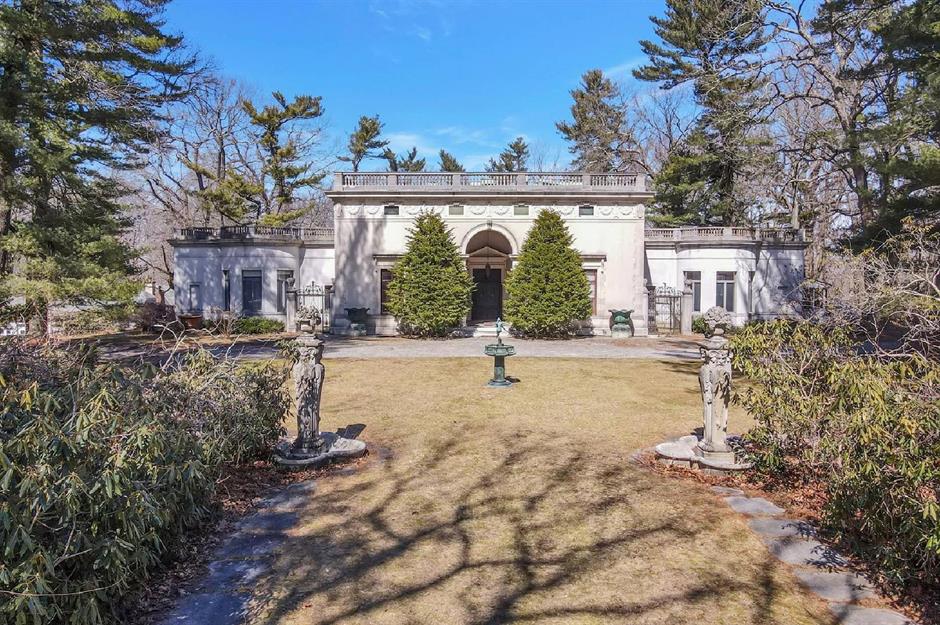 LeBoutillier added two wings, designed by architect Charles Meyer, on either side of the Palladian-style structure in 1982. Her descendants have maintained the studio as a kind of shrine to their illustrious forebear, hoping that any potential buyer will prize its history and significance as much as they do. John LeBoutillier, Gertrude's great-grandson said: “I want to sell it to people who will revere it and continue it the way we have." 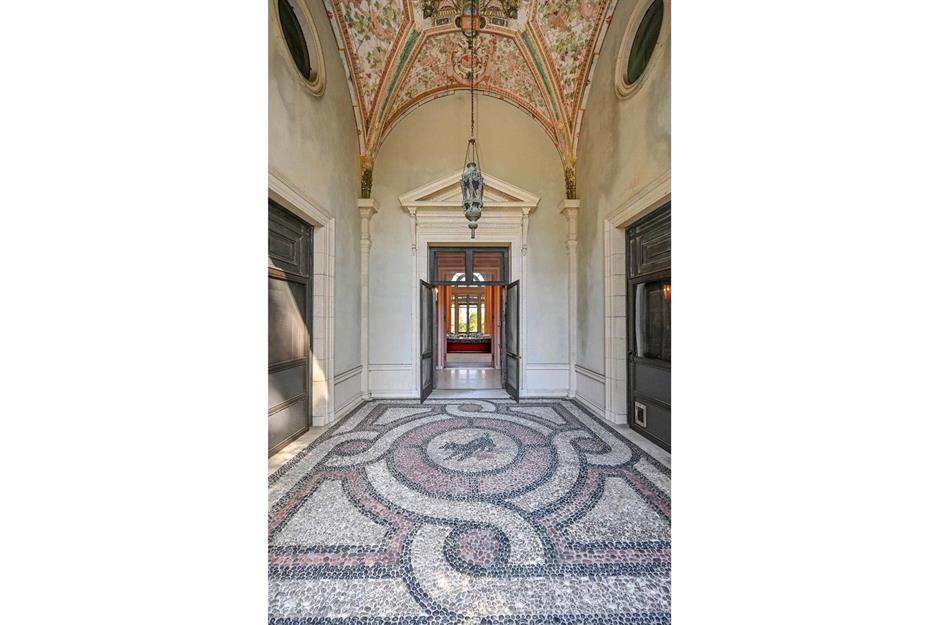 Inside, the neo-classical portico has a stunning groin vault ceiling inlaid with stone mosaic work by artist Paul Chalfin, who also completed the floor. Beyond is a small foyer, leading directly into the spacious central studio, 60 feet long by 40 feet wide, with a 20-foot-high skylight which floods the space with a north facing light, highly prized by artists.

A tragic tale of loss 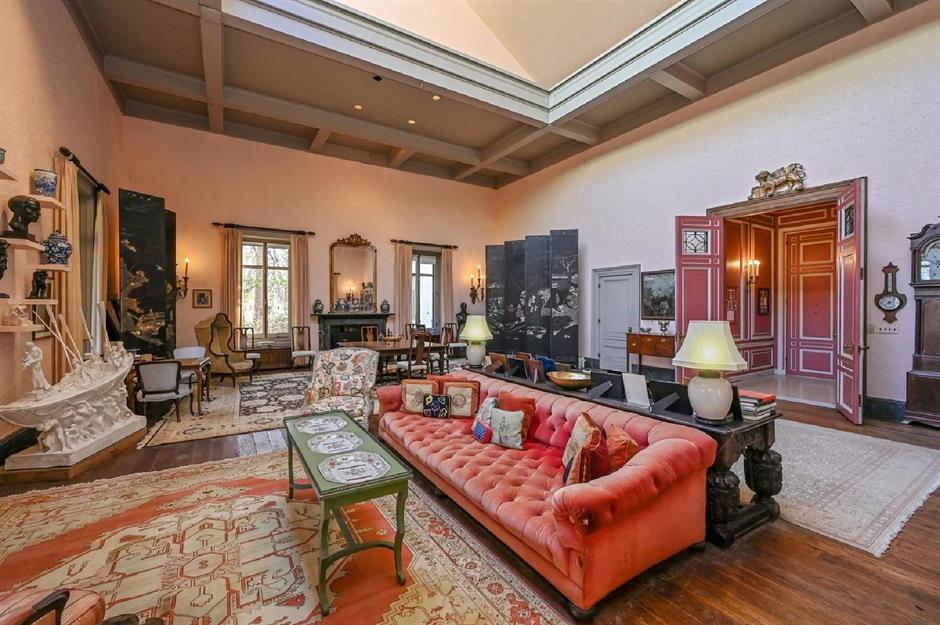 Gertrude’s art sometimes reflected her own personal life. Here, her 12-foot-long pink velvet tufted sofa sits opposite a plaster maquette of her proposed memorial for victims of the sinking of the Lusitania off the coast of Ireland during World War One. The maquette depicts a mother and baby in a lifeboat and references her favourite sibling, Alfred Vanderbilt, who drowned on the British ocean liner, when it was torpedoed by a German U-boat in 1915, after giving his life vest to a woman with a baby.

A stairway to heaven 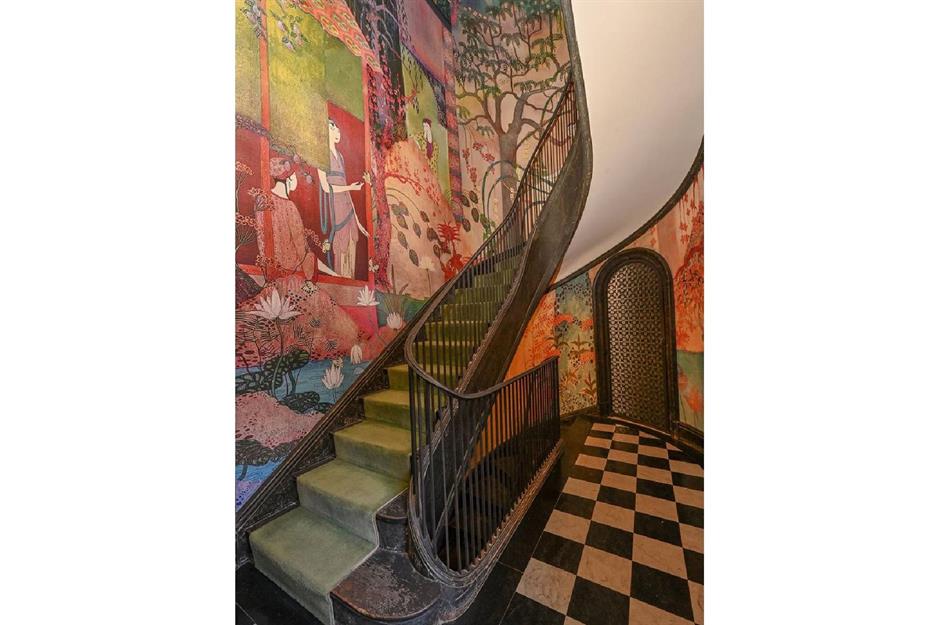 When the studio was in planning stages, Gertrude asked three contemporary artists, friends of hers, to decorate some of the spaces. This included Howard Gardiner Cushing, whom Mr. LeBoutillier believes was also her lover, who was commissioned to create this sublime two-storey-high mural adorning the staircase. 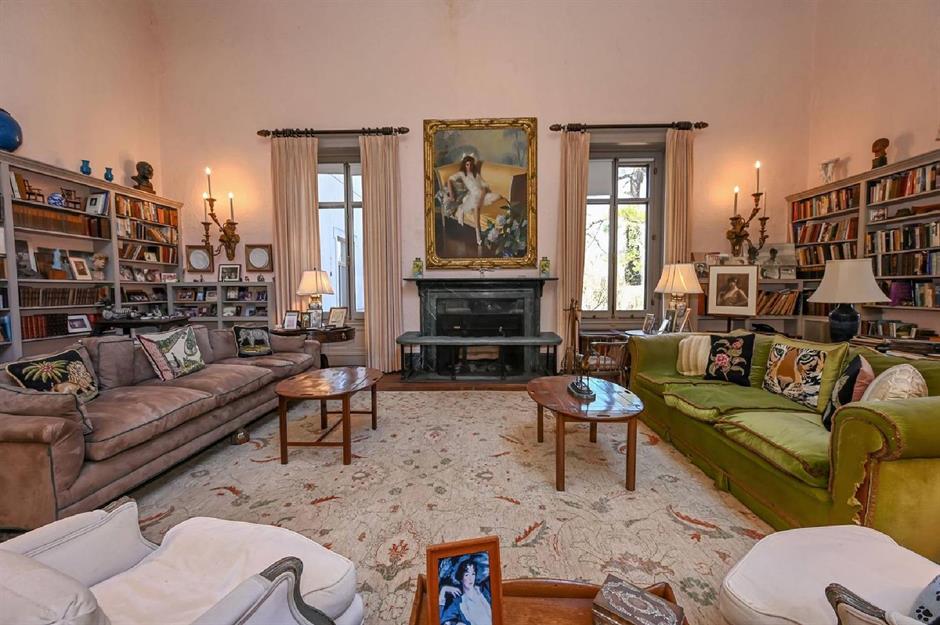 Over a fireplace is a portrait of Gertrude’s eldest daughter Flora painted in 1910, also by Howard Cushing. “They were great friends – maybe more,” says Gertrude’s great-grandson John LeBoutellier. “But most of all he was her mentor”. There were very few female artists around the time Gertrude was working in the early part of the twentieth century and Gertrude was seen as a pioneering spirit. 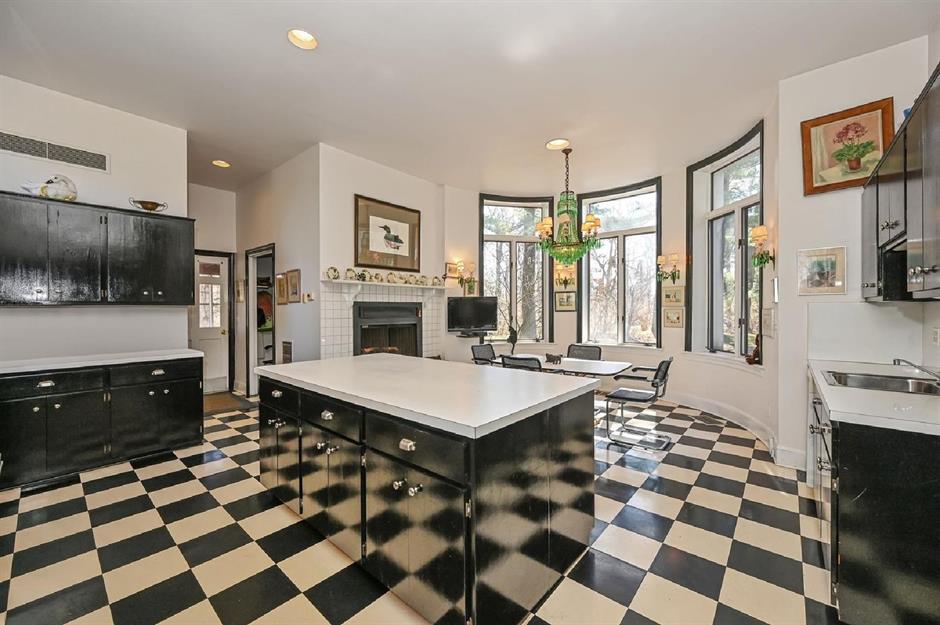 Paul J. Mateyunas/Douglas Elliman
The Whitneys, who married in 1896, lived mainly in New York City and used their Long Island estate as a country home. The original studio only had a tiny kitchenette. A new larger kitchen was installed in one of the new wings in the 1980s when Gertrude’s granddaughter Pamela took up residence.

A riot of colour 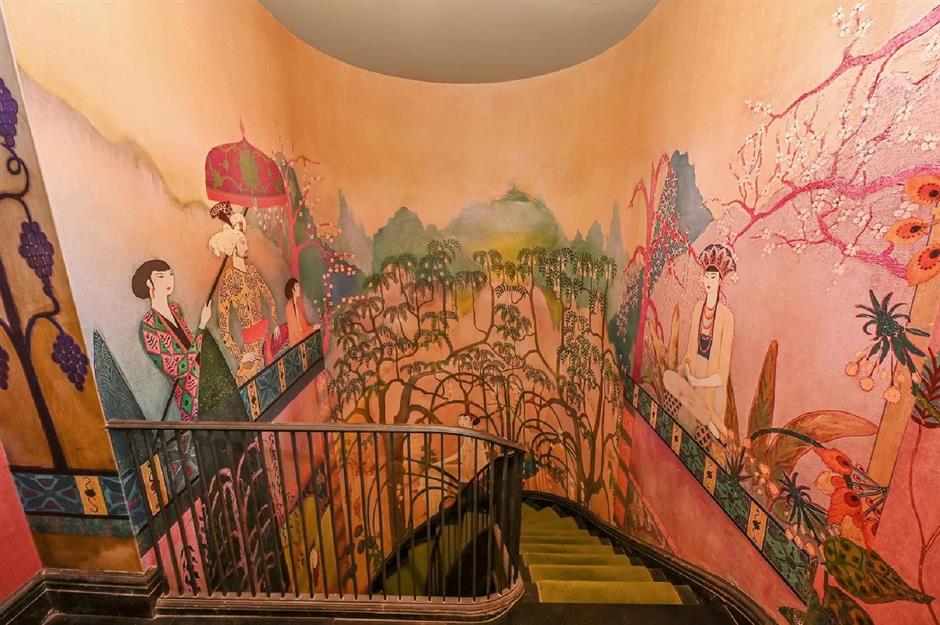 The original oriental-inspired wrap-around mural, included a portrait of Gertrude in an androgynous avant-garde ballet outfit. This section was sold off in the eighties, along with the rest of the mural at the Cushing family’s request. Happily, the family agreed to provide this exact replica (above) of the 73-foot-long original, and only the expert eye would be able to tell the difference!

A room of one's own 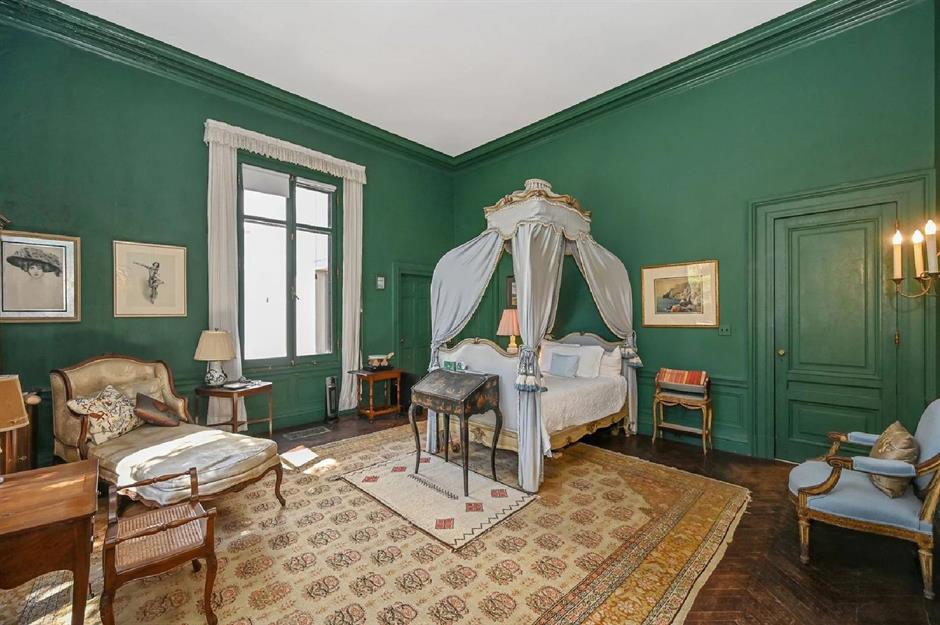 Paul J. Mateyunas/Douglas Elliman
Pamela converted one of the reception rooms into a replica of Gertrude’s bedroom in her Paris home, using furniture that had been in storage, including Gertrude’s canopy bed, chaise, desk and even a letter opener. “My blue bed was like celestial sky come to earth,” Gertrude wrote in her journal. 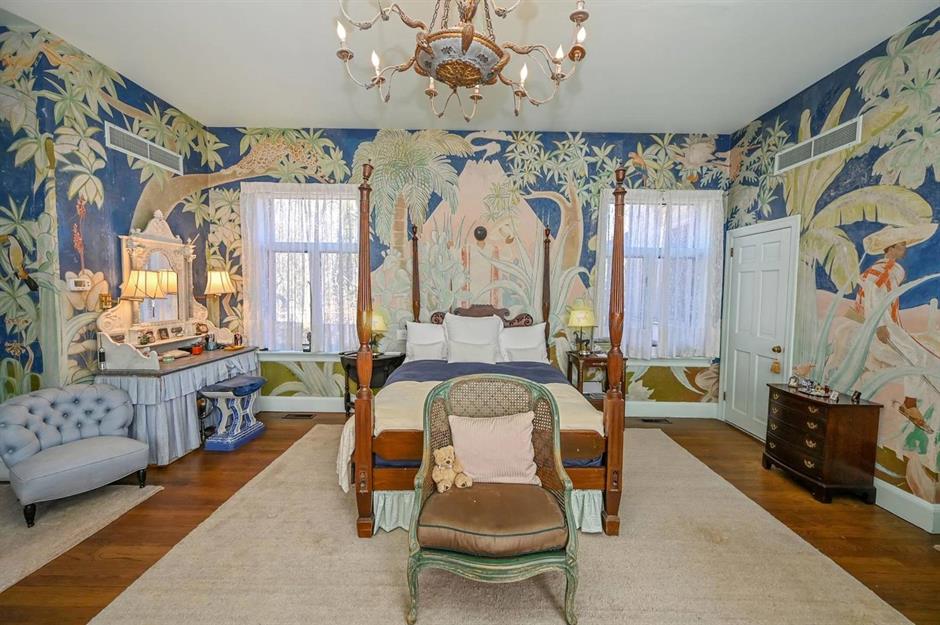 Paul J. Mateyunas/Douglas Elliman
The vibrant mural on the wall in this bedroom is by Charles Baskerville, who was known for his tropical-themed landscapes. Gertrude was a big fan of his lush designs but sadly, her descendants have had to sell off several inbuilt artworks from the estate over the years. In 1999, to raise funds for a relative’s medical expenses, they sold a mural set by Maxfield Parrish that depicted Renaissance troubadours and celebrants. 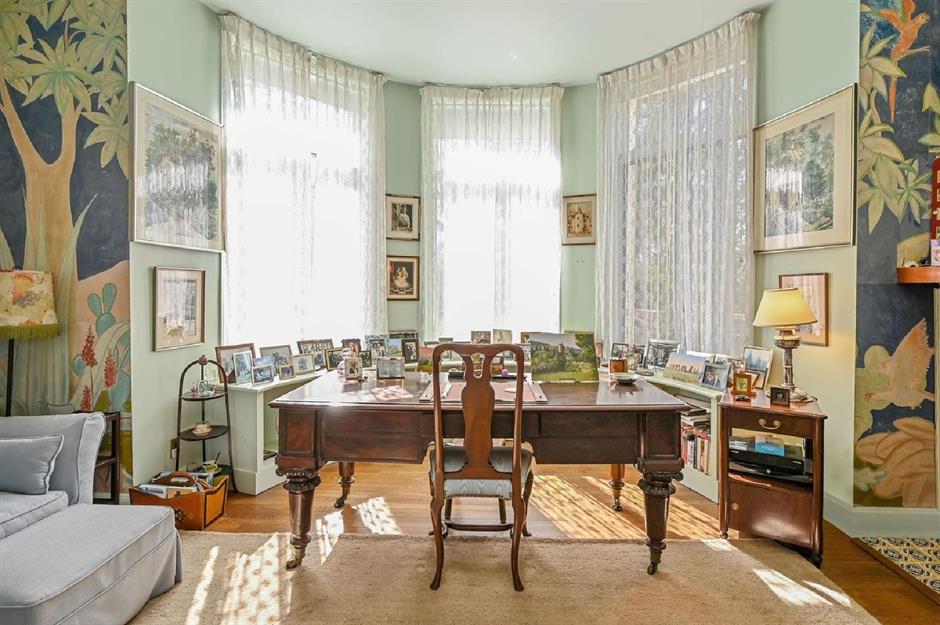 A light-filled corner of the Charles Baskerville-decorated room features photographs of family members from bygone days. Despite its historical décor, the current family have managed to create a modern, homely atmosphere with pastel shades and beautifully appointed furnishings. 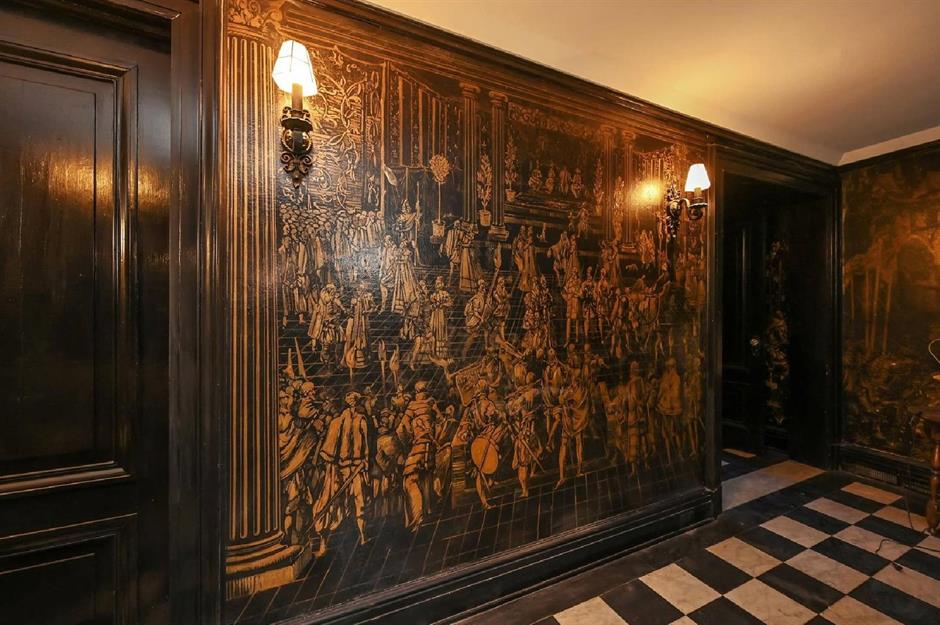 Elsewhere in the proprty, the dark and gloomy murals by Robert Winthrop Chanler depicting medieval castles and knights preparing for battle, along with the checkerboard floor, create a more sombre décor scheme for Gertrude’s bedroom upstairs. 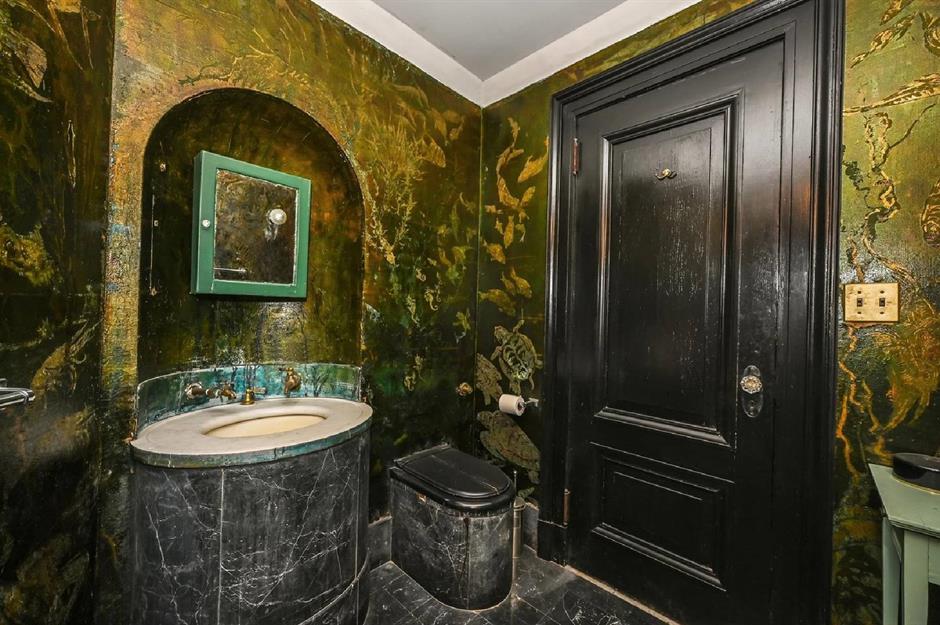 Paul J. Mateyunas/Douglas Elliman
Artist Robert Winthrop Chanler also painted Gertrude’s bathroom (above). The original toilet is set against scenes of aquatic life. There is also a sunken bath, not seen here, that is covered in hand-painted tiles. 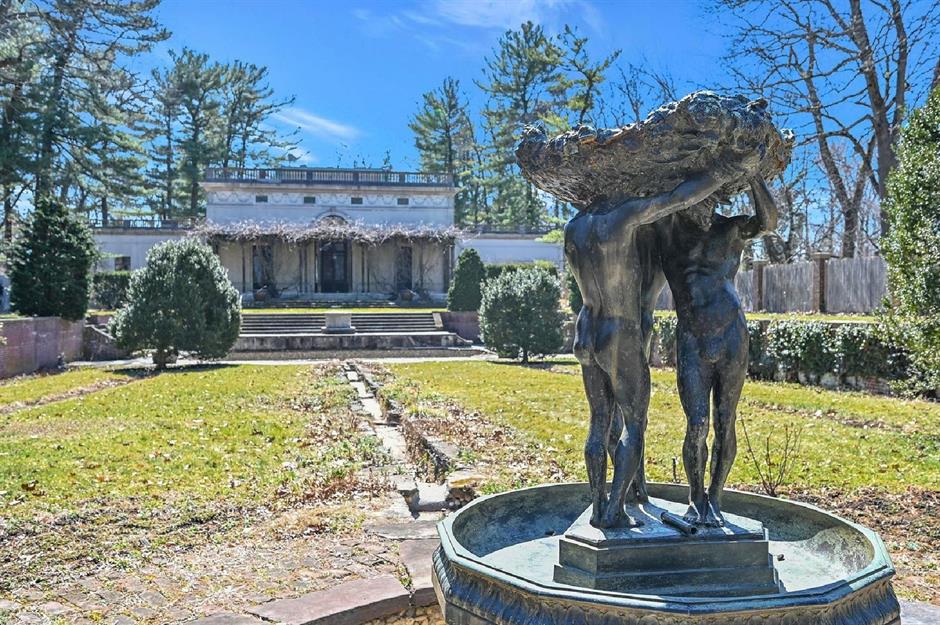 Paul J. Mateyunas/Douglas Elliman
Described by artist Jerome Myers as “the only place on earth in which she could find solitude,” the 7,000-square-foot studio was also a showcase for Gertrude’s collection of modern American art. Its grounds are dotted with her bronze sculptures (above). The estate also includes a greenhouse and a two-bedroom guest cottage accessed via a tunnel. 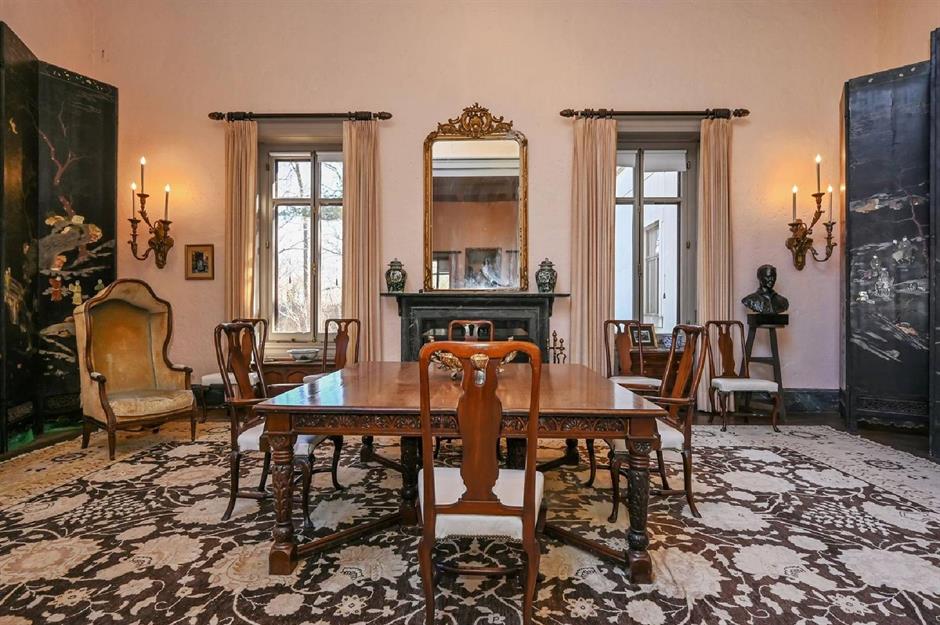 When Gertrude had finished her sculptures, they were lowered into the cellar through a trapdoor, now concealed under a rug in the dining room area (pictured), and loaded onto a pony cart along a 100-foot-long tunnel to the kiln. When her great grandson John LeBoutellier moved here in 1982, he discovered many of the original moulds in the grounds. 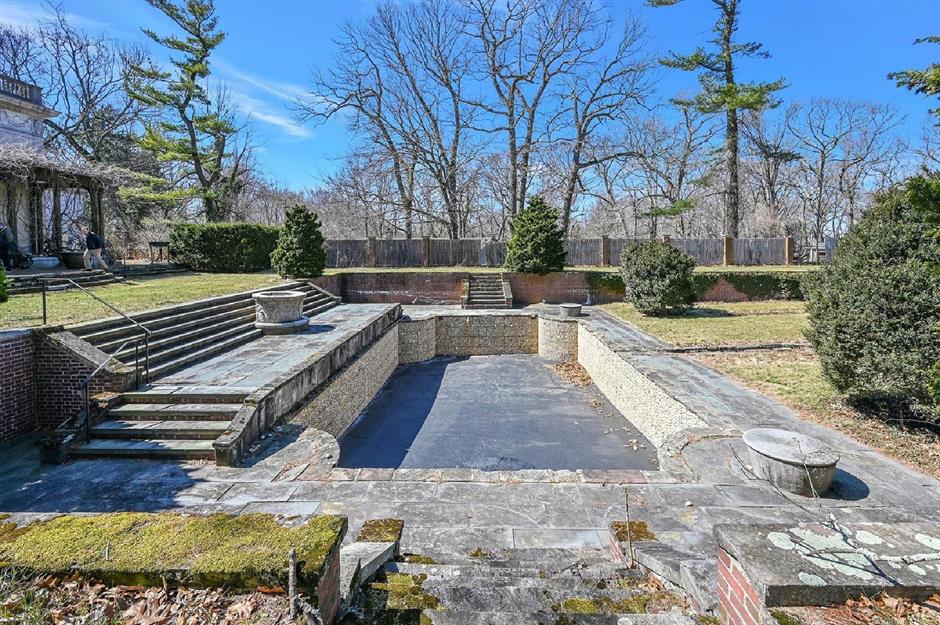 Gertrude threw lavish parties at the studio, where guests included the likes of Albert Einstein and Charles Lindbergh. At one such soirée, artist Robert Chanler sent two kangaroos, which were placed in the empty pool (pictured) for partygoers to gawk at; whilst painter Jerome Myers recalls another featuring white peacocks  and “brilliant macaws nodding their beaks.” 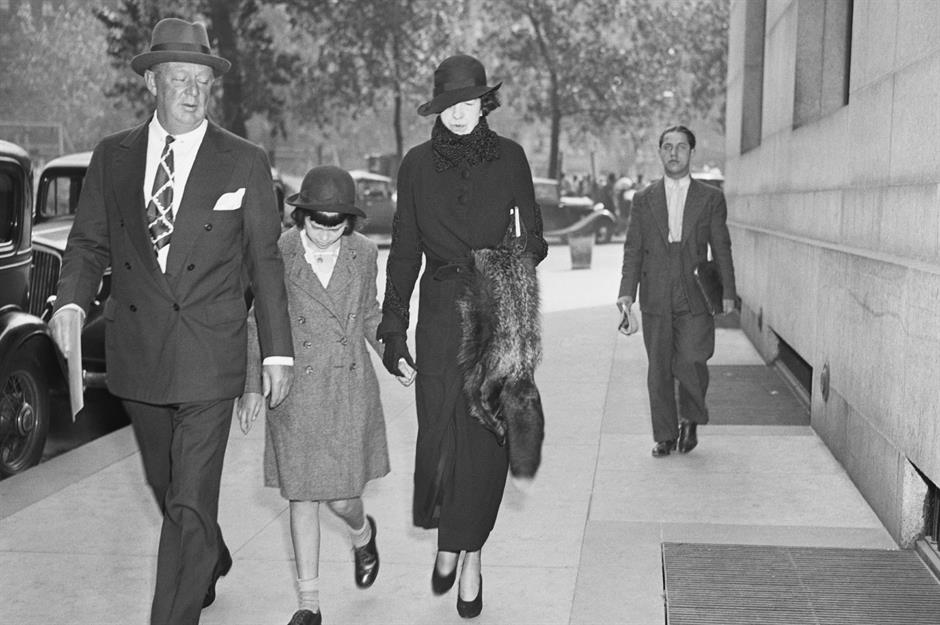 Despite the parties and her immense wealth, Gertrude suffered her share of unhappiness. Her husband was well known for his philandering and in 1934 she fought for, and won, a very public custody battle over her nine-year-old niece Gloria Vanderbilt, daughter of Gertrude’s brother Reginald, who died in 1925, and his young widow Gloria. The young Gloria (above with Gertrude and a man thought to be her lawyer) went to live with her aunt and was nicknamed “poor little rich girl”. 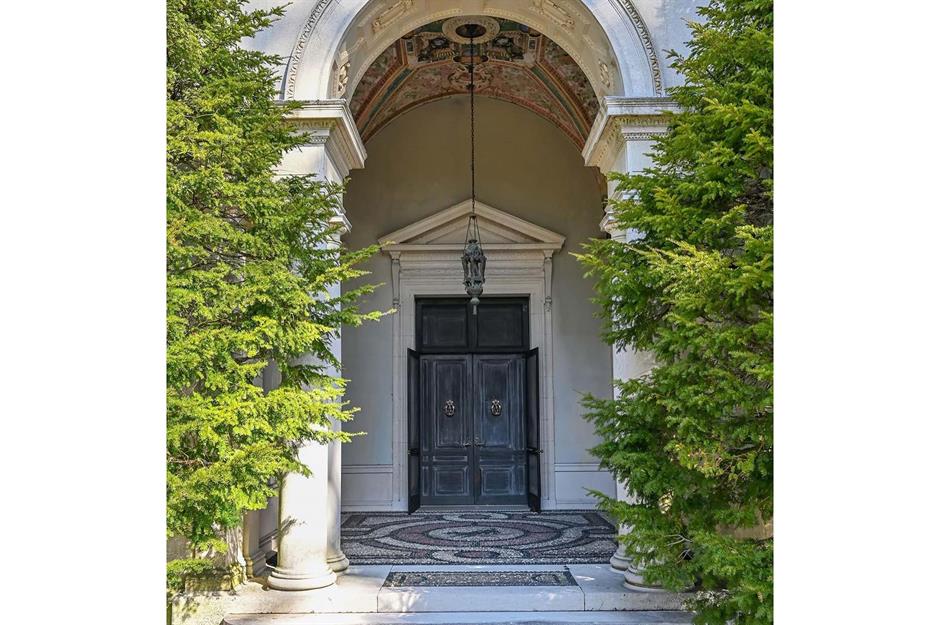 Now ready for new owners to create their own history in this unique property, there even is an Instagram account to showcase more photos of Gertrude and her beautiful work. Surely an art lover will snap up this home?