Khloé Kardashian’s houses: from a Beverly Hills 4-bed to her $17m Calabasas mansion

An inside look at Khloé's wonderfully organised homes 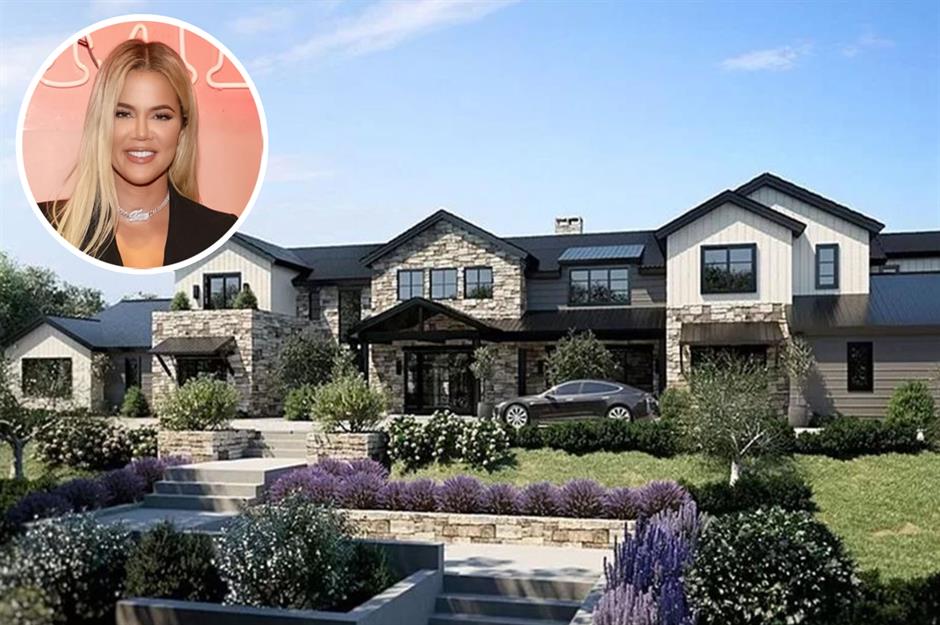 The youngest of the three Kardashian sisters has seen her fair share of fame, success and controversy since the start of her family’s reality show career. Starring in spin-off TV shows and launching numerous fashion collections including the inclusive denim brand Good American, Khloé Kardashian is now a multimillionaire worth an impressive $80 million (£65m). But where does the most organised Kardashian live? Let's go through the keyhole on her lavish real estate journey...

Where does Khloé Kardashian live? 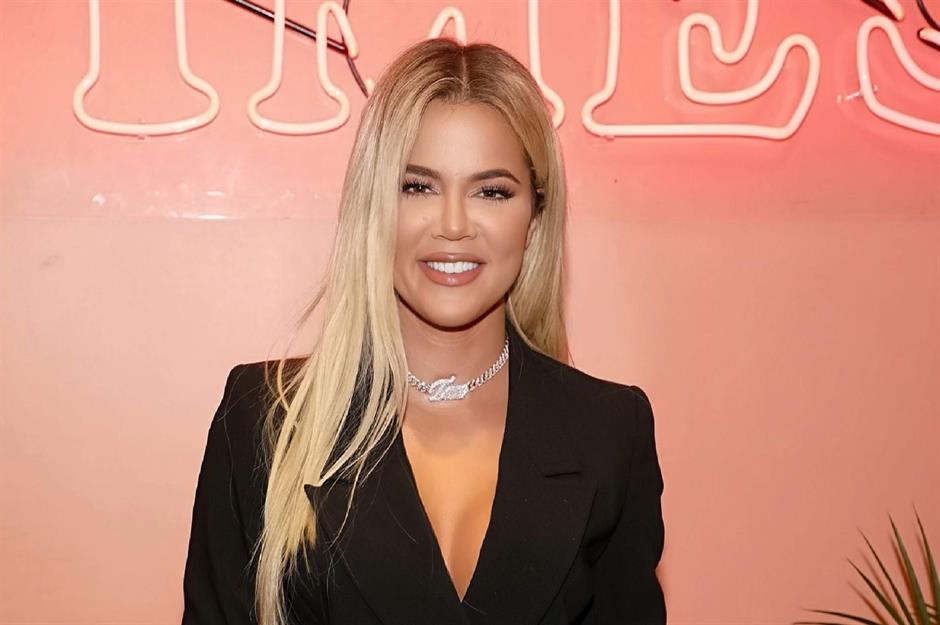 Khloé moved into her latest dream home in November 2021, after purchasing the plot in October 2020 for $17 million (£12.7m) and building it from scratch to her exacting requirements. The mansion sits in the Kardashian-loved, guard-gated community of Hidden Hills, privately located within the San Fernando Valley, L.os Angeles. Sitting right next door is none other than her manager and mother (aka 'momager'), Kris Jenner in the house she built around the same time for $20 million (£14.9m). Twinning! But where did she start out? 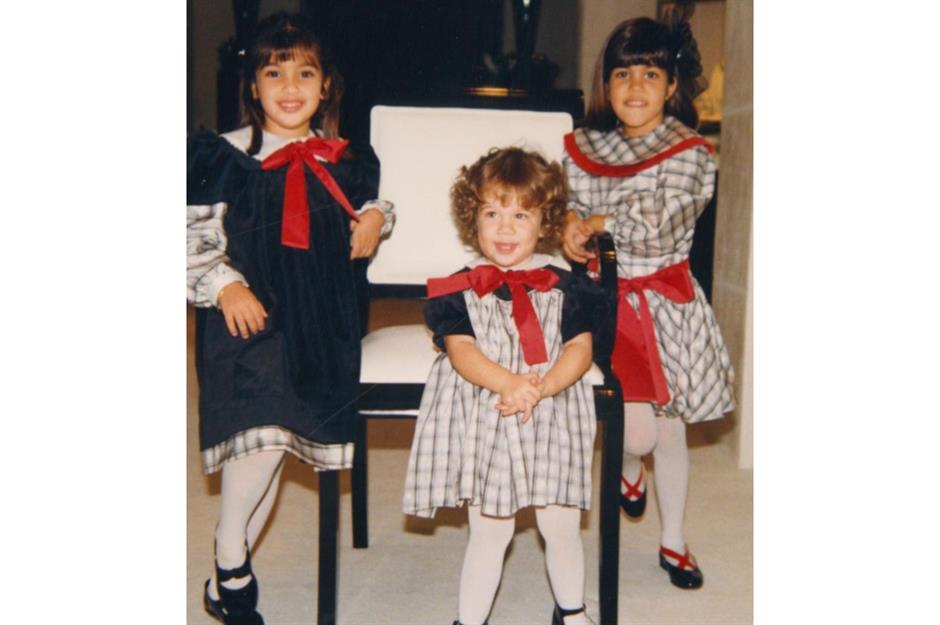 The youngest and tallest Kardashian sister was born in Los Angeles, California on June 27, 1984 to mum, Kris Houghton (Jenner) and third-generation Armenian American lawyer, Robert Kardashian. Here she poses for a photo in the early 1990s with sisters, Kim and Kourtney. Little brother Rob was born in 1987, creating a large happy family in the Californian hills. But yet more siblings were on their merry way… 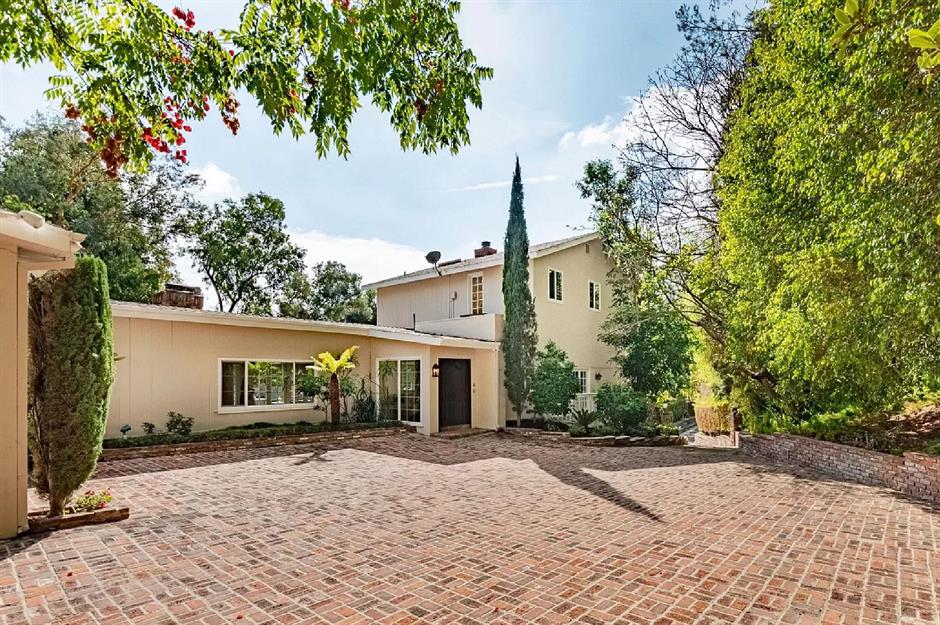 Where did Khloé Kardashian grow up? 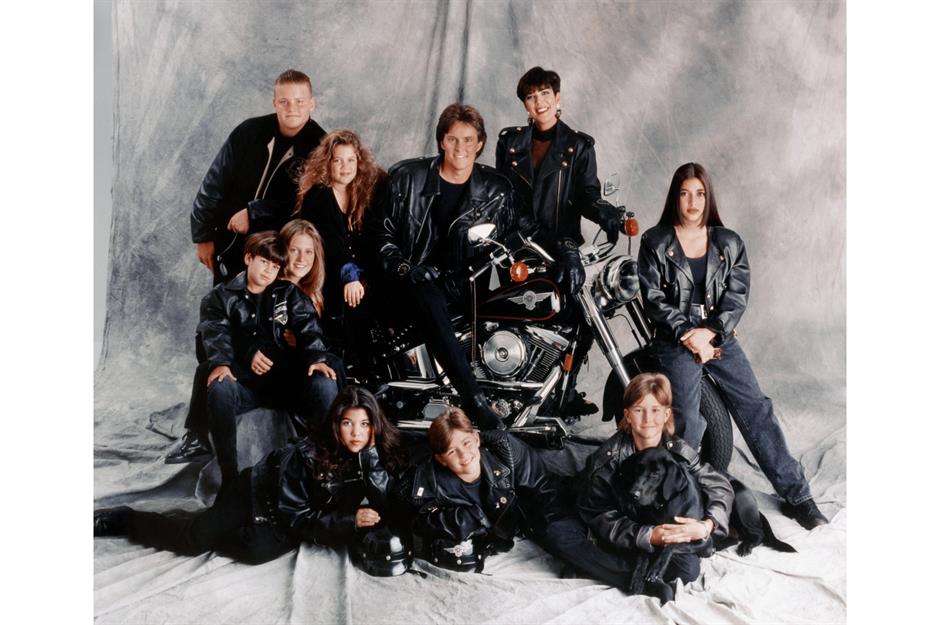 Kris met Olympics decathlon winner, then known as Bruce (now Caitlyn) Jenner, who had four children from a previous marriage. Pictured here in 1993, the family grew with the arrival of Khloé's half-sisters, Kendall and Kylie in 1995 and 1997 respectively. Khloé attended seven different schools in LA, from Bel Air Prep to Marymount High School, a Roman Catholic all-girls' school in Los Angeles. She ultimately enrolled in an alternative one-to-one school, as she was reported to have said she felt like she didn’t have any friends besides Nicole Ritchie who she met at Monclair Prep school, and whom she would later work for as an assistant. 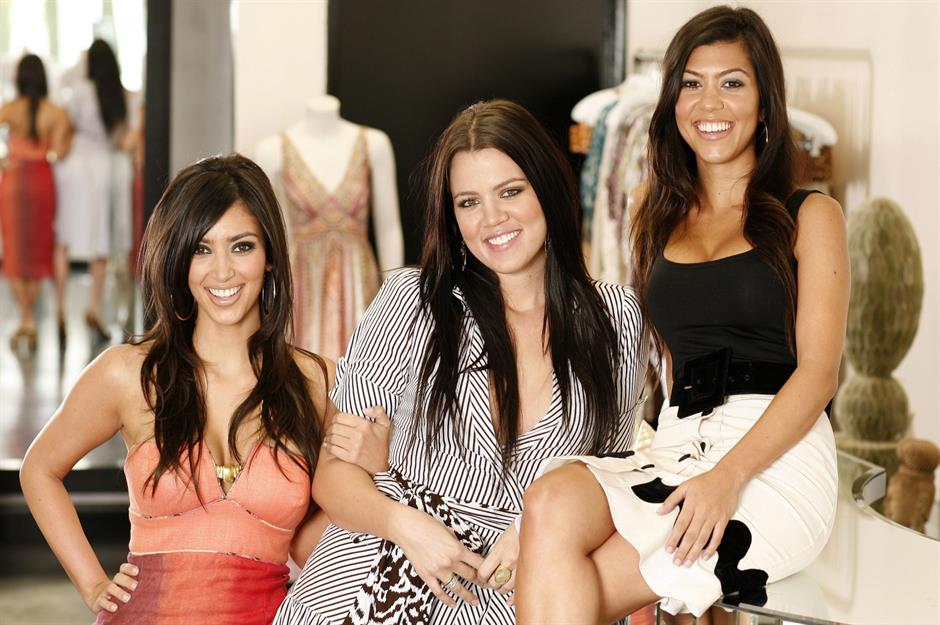 In 2007, after sister Kim’s infamous leaked sex tape controversy made the Kardashians a household name, a reality series documenting the family's day-to-day lives was commissioned. Khloé charmed viewers with her comedic timing and natural wit, going on to star in spin-off shows such as Kourtney and Khloé Take Miami. The sisters had already launched their clothing brand, D-A-S-H, in 2006, opening multiple stores in Miami, New York and, of course, LA.

On September 27, 2009, the reality star married Los Angeles Lakers basketball player Lamar Odom just one month after they met at a friend's party. The loved-up newlyweds soon had their own show together, starring in the aptly named Khloé and Lamar, which debuted in April 2011. But where did the TV stars live?

This stunning Mediterranean style villa resides in the secluded and gated (yet very well known) area of Mulholland Drive, California. The six bedroom abode spans across nearly 8,000 square-feet of living space and is completely surrounded by mature trees and a wealth of vegetation for added privacy. Perfect for the ever-papped pair, who reportedly paid $3.9 million (£3.1m) for the abode in December 2009.

A dramatic two-storey foyer and sweeping staircase greets you upon entry, seen here after the Odoms had moved out. But we’re sure many a grand entrance and theatrical walk-out was staged in this hallway, filmed or otherwise…

The heart of the property is the large kitchen hosting top-shelf appliances, convenient island, a breakfast nook and dining bar that opens out to a large family room. Perfect for cosy get-togethers by the fireplace, especially back when little brother Rob would come for extended stays.

The master suite also hosts its own fireplace, alongside three custom walk-in closets and this ensuite bathroom featuring the famous sunken bath tub from a Season 4 of Keeping Up With The Kardashians. In the episode in question, Khloé filled the bath with candy and posed for a lighthearted video designed to woo husband Lamar, who was spending his days on the road with the Lakers.

Outside resort-like grounds await, with a glittering swimming pool and water feature, fire-pit for heated gossip sessions and the charming covered arbour near the outdoor kitchen and bar – perfect for visits from the whole extended family (we bet they got along famously). Unfortunately, the duo went their separate ways in 2013, with Khloé filing for divorce on December 13, following months of speculation. Their house went on the market for $5.5 million (£4.5m) in January 2014, while their divorce was finalised on December 17, 2016. 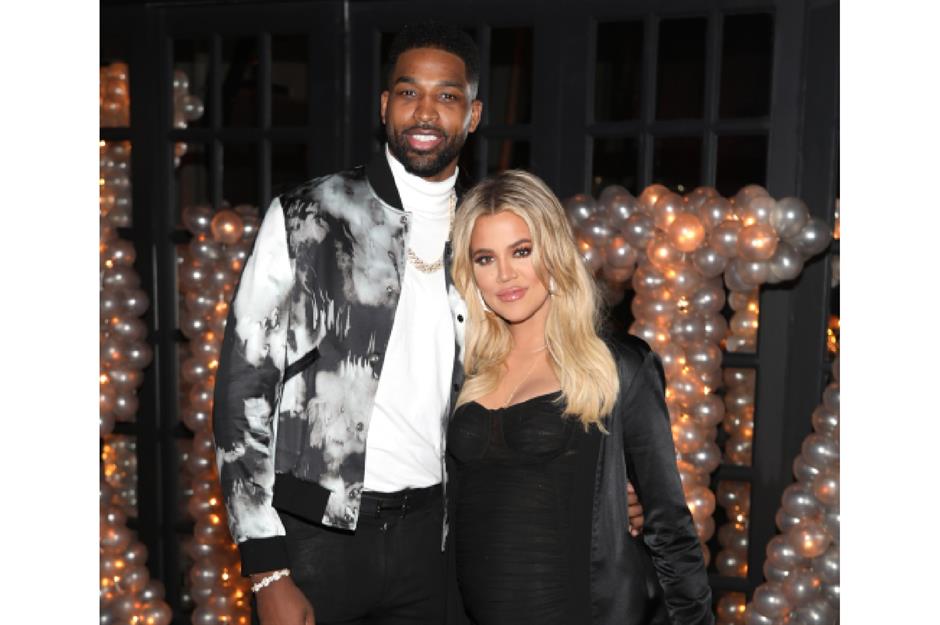 After a brief, on-again/off-again romance with rapper French Montana, Khloé began dating basketball player Tristan Thompson in 2016. That same year, Khloé and businesswoman Emma Grede launched their clothing line Good American, offering jeans ranging from size 00 to 24, making $1 million (£820k) in sales on the first day. But where was the denim mogul living at the time? 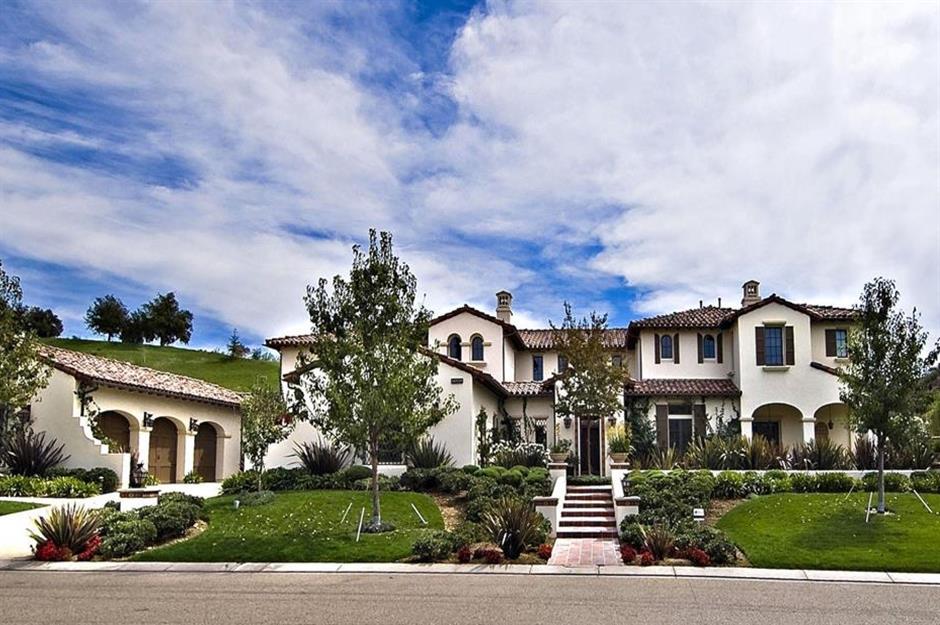 In 2014, Khloé purchased this rather attractive 10,000-square-foot Mediterranean Revival estate from none other than Justin Bieber for $7.2 million (£5.9m). The mansion resides within the Oaks neighbourhood of Kardashian-loved area of Calabasas, keeping the reality star close to her family.

One of the few homes in the area that sits pretty along the Malibu canyon, the mansion is highly coveted and a clear favourite with privacy-loving celebrities. The six-bedroom, seven-bathroom abode resides across 1.28 acres and was built in 2005. 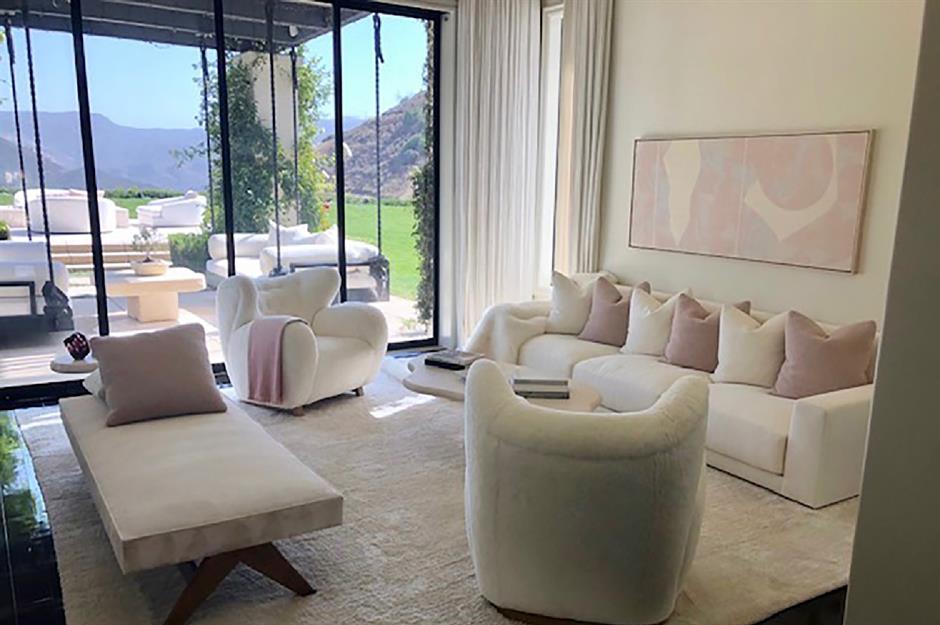 Both Khloé and her sister Kourtney enlisted the help of designer Martyn Lawrence Bullard to re-design their homes. Referencing its previous pop star owner, Justin Bieber, Bullard explained to Architectural Digest: “Khloé’s house was a giant play palace built for a boisterous young man. We decided to give it some romance, bringing it back to its Mediterranean roots.” 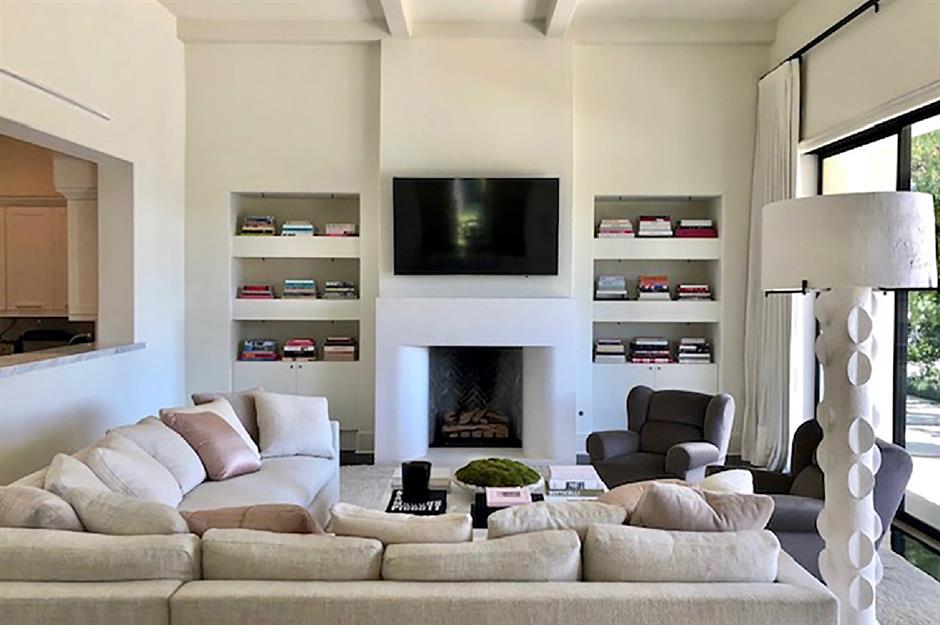 Khloé’s half-sister Kylie Jenner also bought a house nearby closely followed by their 'momager', Kris Jenner. At the time Kim and then-husband, Kanye West were living in Kris' house while their Axel Vervoordt-designed home was being built. A full Calabasas family affair! 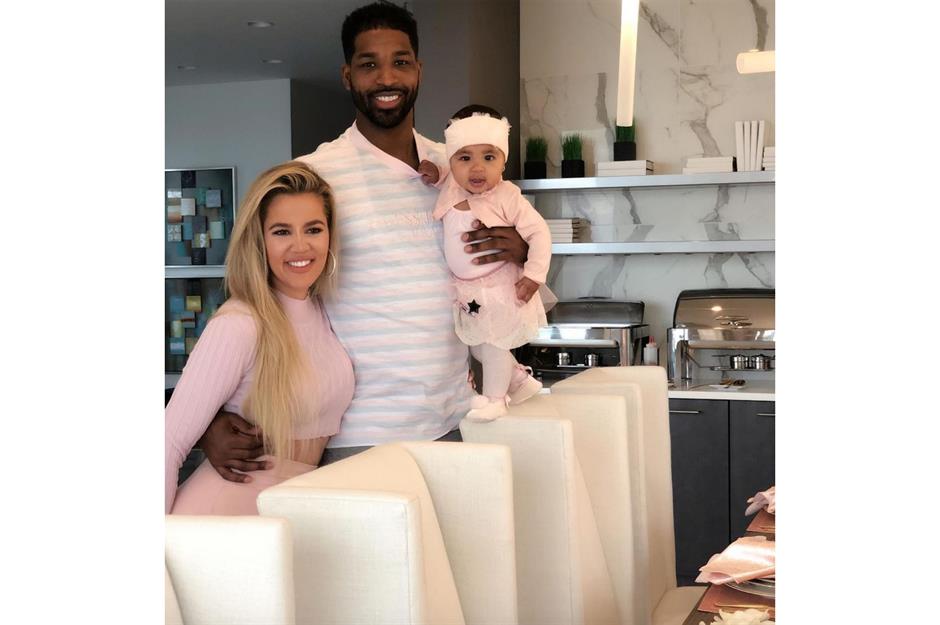 After starring in and producing reality show Revenge Body with Khloé Kardashian in 2017, the Calabasas-dwelling family girl became pregnant with her first daughter, True, who was born on April 12, 2018. The time around her birth was far from plain sailing, however, as news aired that Tristan Thompson had cheated on Khloé while she was pregnant. 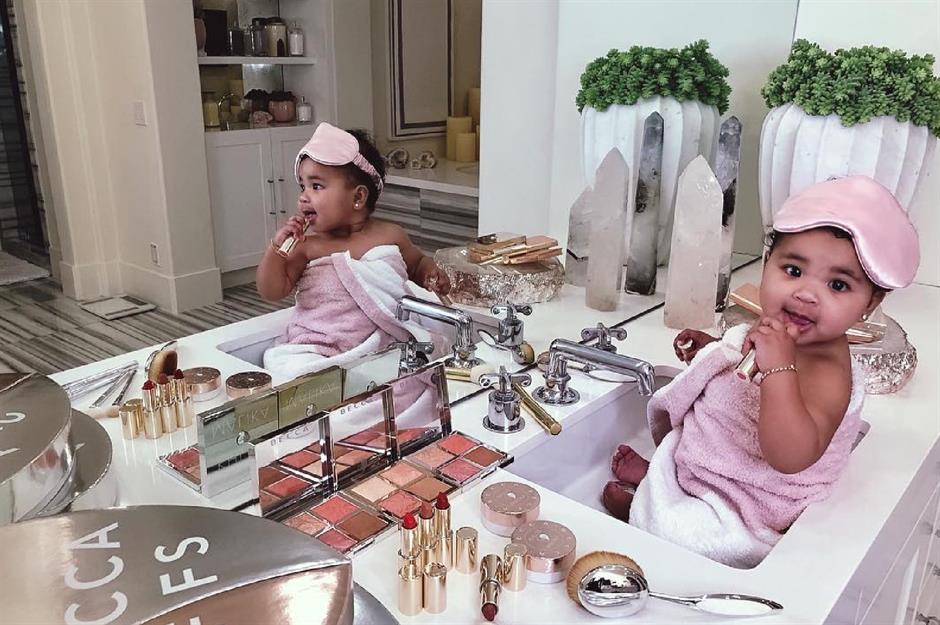 Posting a photo of True surrounded by cosmetics at home in January 2019, proud mum Khloé jokes that her baby daughter will be filming a make-up tutorial on her Instagram account. One month later, Khloé and Tristan broke up after she reportedly discovered that Thompson had spent the night with Kylie Jenner’s then-best friend, Jordan Woods. 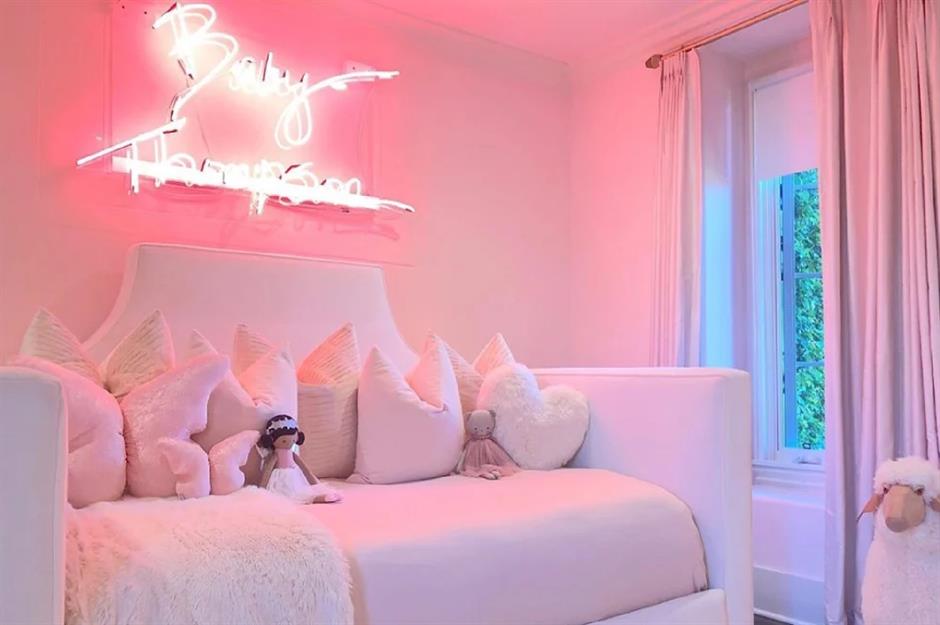 While True’s bedroom was a vision in pink, with her name in pink neon on the wall, mum Khloé enjoyed a calmer colour palette of natural tones, echoed throughout the rest of the property. Discussing her own bedroom with Architectural Digest, she said, “I don’t get a lot of alone time, so when I have a chance to relax in bed I really savour it. It’s like being in a Champagne heaven.” 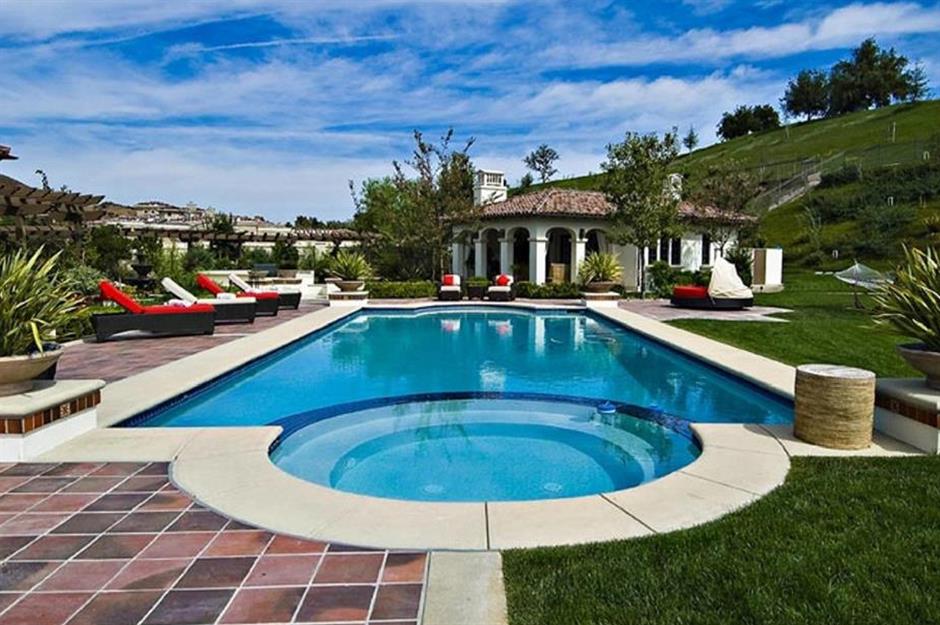 In May 2020, KoKo said goodbye to that pool and put the Calabasas mansion on the market, selling in an off-market deal. The property sold for a whopping $15.5 million (£12.7m) that November, according to People, more than double what she paid for it in 2014. Khloé reconciled with True's father Tristan in August 2020, after the family reportedly quarantined together during the COVID-19 pandemic. But where did they live next? 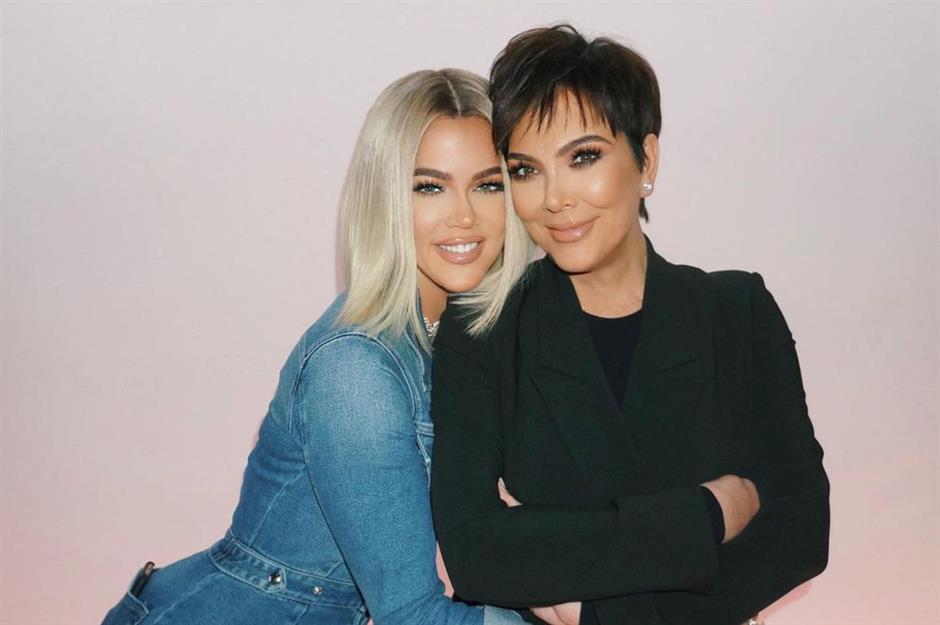 Like mother, like daughter! Variety reports that Khloé bought a newly built Farmhouse-style mansion in the Ashley Ridge neighbourhood of Hidden Hills for $17 million (£13.8m) in October 2020, Khloé's mum bought the other brand house next door for $20 million (£16.3m). But it’s not just the area code they share. In a 2019 episode of KUWTK, Kris describes her daughter as "the most organised, cleanest, most obsessive person I know in her own home", adding that “the apple doesn’t fall too far from the tree. When we were raising the kids, I was always cleaning and organising and reorganising and moving things around, so I kind of feel responsible.”

The two properties were once part of a single huge estate set over three acres of land and owned by construction magnate Ron Tutor, father of Million Dollar Listing star Tracy Tutor. It was even reportedly leased to Britney Spears in 2011 and 2012. A local developer took on the project and in 2020 the construction of the 10,000 square-foot home (and Kris' 16,000-square-foot house next door) began. Work was put on hold in Jun 2021, as it was revealed a conman contractor disappeared with Kris and Khloé's money and the deeds to their properties. The matter was eventually resolved, but not without a Kardashian-sized drama and lawsuit. 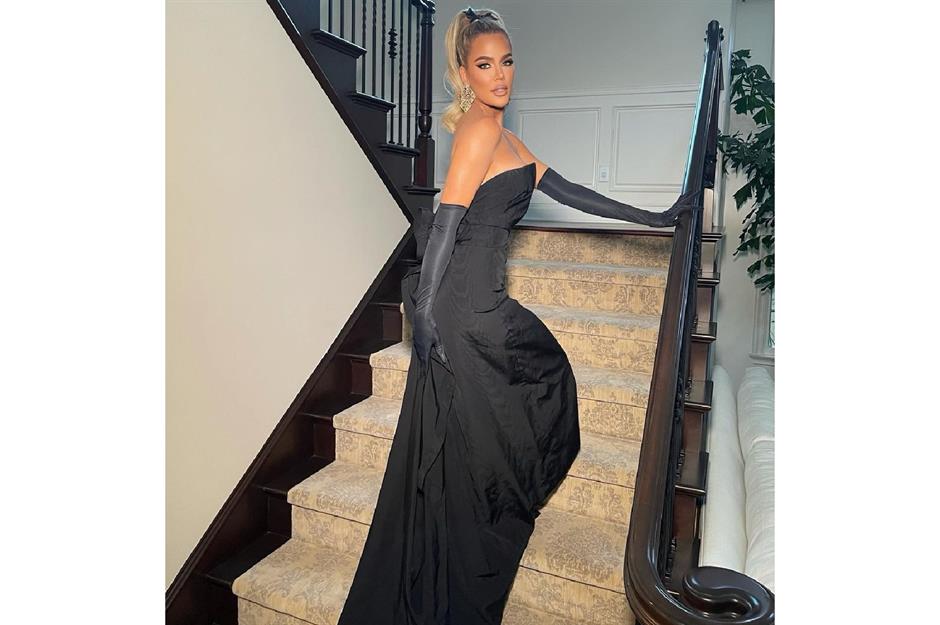 Buying a house built to spec meant Khloé could add her own touches to the project, and floor-to-ceiling windows and doors, an inground pool, temperature control systems and even a panic room were incorporated into the design. Once construction was finally completed and the interiors fully renovated and revamped, Khloé moved in around November 2021 and spared no time posting photos of the interiors (and herself).

In an episode of Hulu’s The Kardashians show, Khloé proudly shows off her finished house after enjoying a tour of Kris Jenner’s new interiors in a previous episode. Immaculate, neutral furnishings proliferate throughout, as viewers can see; here's one of many sitting/dining rooms, with marble countertops, white chairs and grey rugs. 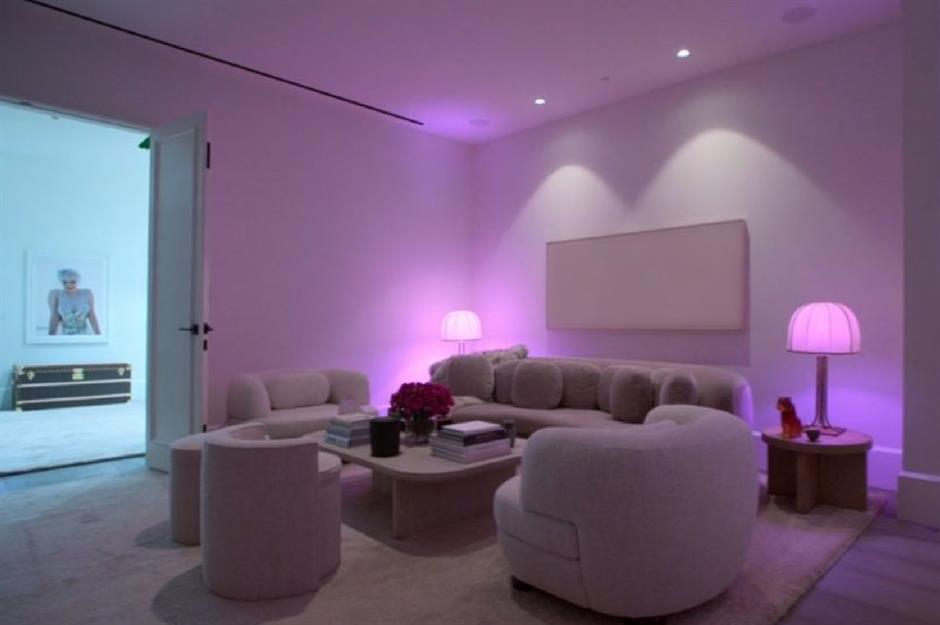 Khloé’s signature cloud chairs can be found in this inviting sitting room, seen here with purple glow lamps atop a fluffy rug and cosy cushions. The perfect place to gather with friends, or perhaps other celebrity neighbours? Jeffree Star, Lori Loughlin and Mossimo Giannulli all live in the area, the Kardashians still outnumber the lot, though! 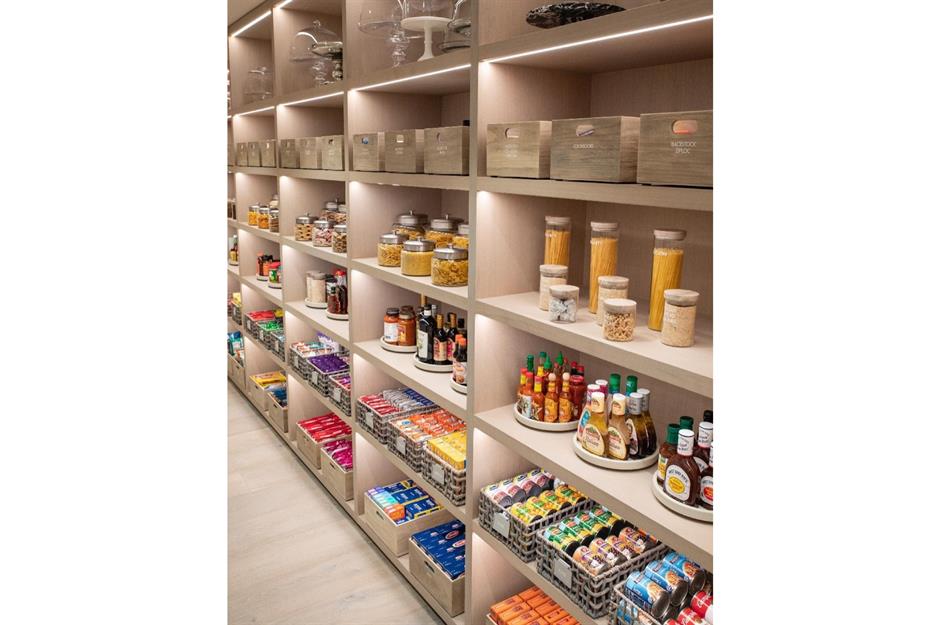 The ultra-organised sister solidified her neat-and-tidy reputation with a sneak peek into her pantry, designed by The Home Edit. The large walk-in pantry resembles a museum of food, with rows upon rows of neatly stored dry goods, condiments on rotating circular trays and baking ingredients from floor to ceiling, all illuminated via in-shelf down lighting. Inspiring home organisation! 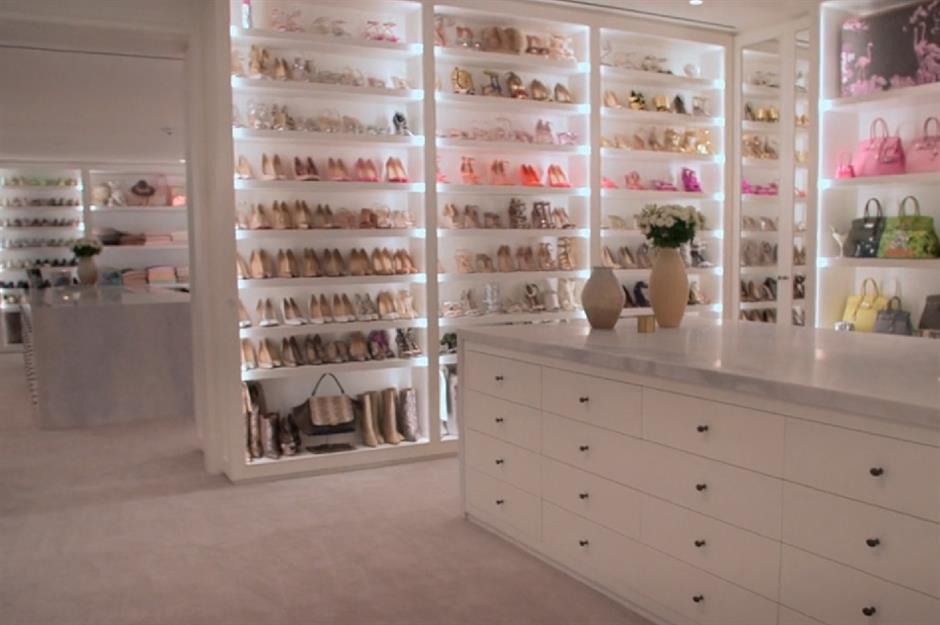 More evidence of the star’s so-called "Khlo-C-D" can be found in the uber organised walk-in closet, where two rooms of multi-shelved walls are painstakingly filled with shoes, boots and handbags. A marble island patiently awaits in the centre, presumably to be filled (very neatly) with luxury accessories. 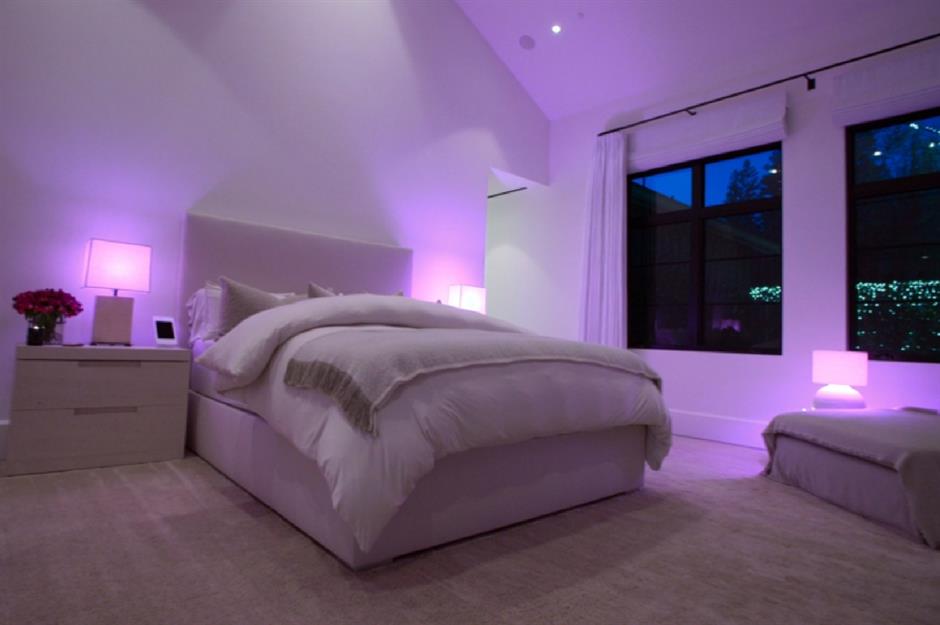 Alongside an estimated eight bedrooms, according to Dirt, the sprawling estate features is said to host nine bathrooms, an eight-car garage, covered patios, guesthouse, home cinema and a gymnasium that rivals professional-grade gyms, packed with enough workout equipment to service the whole of Calabasas.

Khloé shared updates on her backyard renovations, with photos of a beautiful arched walkway that leads out towards a sheltered terrace area and rose-covered pergola. A huge pool, basketball court and sprawling gardens lie elsewhere on the grounds, ideal for True and her cousins to run about on. 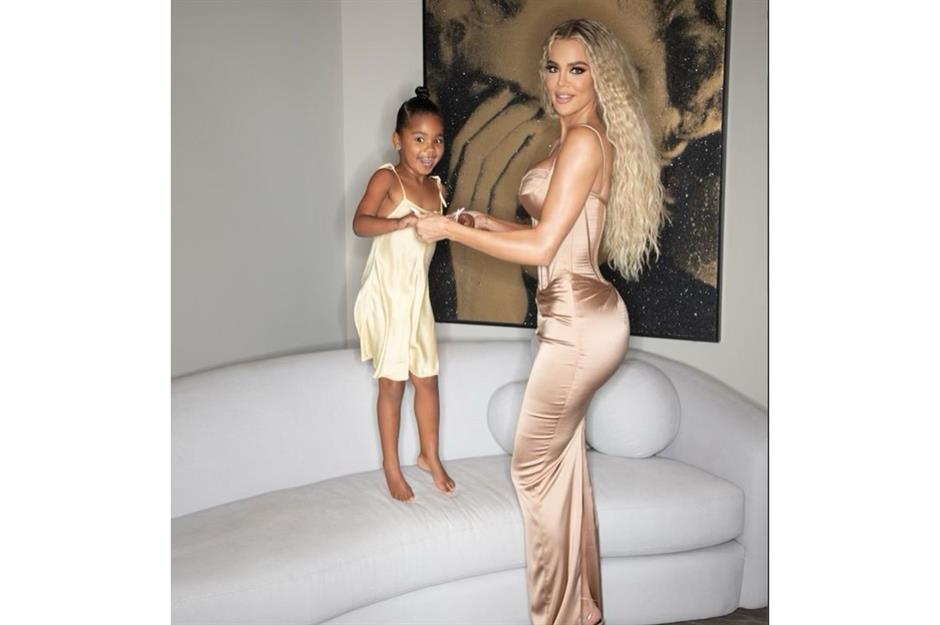 Pictured here dressed for The Kardashians launch party in April 2022, Khloé shows her carefree side and lets True jump on the immaculate furniture. As more cheating scandals emerge over Tristan Thompson, we hope Khloé is enjoying some peace in her custom-built abode surrounded by her close family in this Calabasas dream home.