Inside the palace that Princess Eugenie shares with Meghan Markle

Jonathan Brady / PA Archive / PA Images
This month, on October 12, Princess Eugenie is set to marry her fiance Jack Brooksbank. The happy couple will begin their married life in a cottage in the grounds of Kensington Palace, living with a number of other royals who also reside there. We take a look behind the walls of the royal residence to reveal the grandest shared living space in the UK.

Justin Tallis / Getty Images
Just four months after they announced their engagement, Princess Eugenie and fiancé, Jack Brooksbank took up residence at Ivy Cottage which sits within the grounds of Kensington Palace.

Google
Their new home, Ivy Cottage, is next door to Wren House, home to the Queen's first cousin Prince Edward, Duke of Kent and Katharine, the Duchess of Kent. It has been estimated that Eugenie will contribute an approximate £3,000 ($4k) worth of rent per month.

A home through the centuries

The National Archives
Kensington Palace was introduced into the royal family by William III when he purchased it in 1689 as a country retreat. Originally known as Nottingham House, which was a suburban Jacobean villa owned by Sir George Coppin. This drawing shows the house as it might have looked in the 17th century, drawn by the historian and architect Patrick Faulkner in 1948.

The palace has been through many transformations as it has been passed down the line of royals over the years. It's been home to some of the country's most loved royals, including Queen Victoria, Princess Margaret and Diana, Princess of Wales. ​

Today, the palace is split into three residential units where the royal family and palace staff live side-by-side. The three units are made up of a quadrangle behind the main palace, two smaller enclosed squares directly to its right and a separate cluster of red-brick cottages towards the far right end of the grounds.

Oli Scarff / Getty Images
While you can't tour the private royal residential quarters, tourists can explore the King and Queen's State Apartments, which are managed separately by Historic Royal Palaces. Designed by William Kent between 1725 and 1727, this elaborate staircase is one of the many commissions by the palace's original founders William III and his wife Queen Mary.

We can't help and think it looks amazing, but who pays for it all? The Queen owns Kensington Palace on behalf of the nation, but the cost of its upkeep comes from the Sovereign Grant, an allowance provided by the government. Many of the royals earn their rent at Kensington Palace by fulfilling public royal duties, but there are a few family members, including Princess Eugenie, who choose to contribute to its upkeep by paying rent.

Jonathan Brady / PA Archive / PA Images
For Princess Eugenie, living in such a historic home isn't all plain sailing. She reportedly wanted to move into Ivy Cottage in late 2016 but was dismayed when damp was discovered at the property that required extensive repairs. The timing seems to have worked out nicely, though, as the happy couple were able to move into a newly renovated home together.

WPA Pool / Pool / Getty
Just after they announced their engagement in May 2018, the Princess and Jack moved into the three-bedroom cottage. It's the first time the couple have lived together over the course of their relationship and is where they will remain once they are married. It's also just down the road from Nottingham Cottage, home to newlyweds the Meghan Markle and Prince Harry, also known as the Duke and Duchess of Sussex.

Moving away from home

Ian West / PA Wire / PA Images
Princess Eugenie previously lived only two miles away from her new abode in a four-bedroom apartment in St James' Palace with her sister, Princess Beatrice. Her father, Prince Andrew reportedly paid the £20,000 a year rent for Princess Eugenie and her sister. Before living in St James' Palace, both the sisters stayed in Royal Lodge in Windsor with their parents, Prince Andrew and Sarah Ferguson.

Anwar Hussein / EMPICS Entertainment / PA
In 2004, Prince Andrew, Duke of York moved into Royal Lodge with his daughters, Princess Eugenie and Princess Beatrice, which is where he has remained ever since. It has also been reported that his ex-wife Sarah Ferguson moved in during 2008, and still lives there, despite the couple being divorced. Before Prince Andrew moved in, it was the Windsor residence of The Queen Mother, until her death in 2002.

eunique1234 / flickr
The Grade II-listed house is just three miles from Windsor Castle and is the most likely venue for Eugenie's wedding reception. The happy couple will head there after they tie the knot at the castle itself, the same location as Prince Harry and Megan Markle's wedding earlier in the year.

Windsor Castle is the oldest inhabited castle in the world and the Queen's favourite weekend retreat. Princess Eugenie and her husband-to-be will exchange rings at St. George's Chapel, located within the castle grounds. 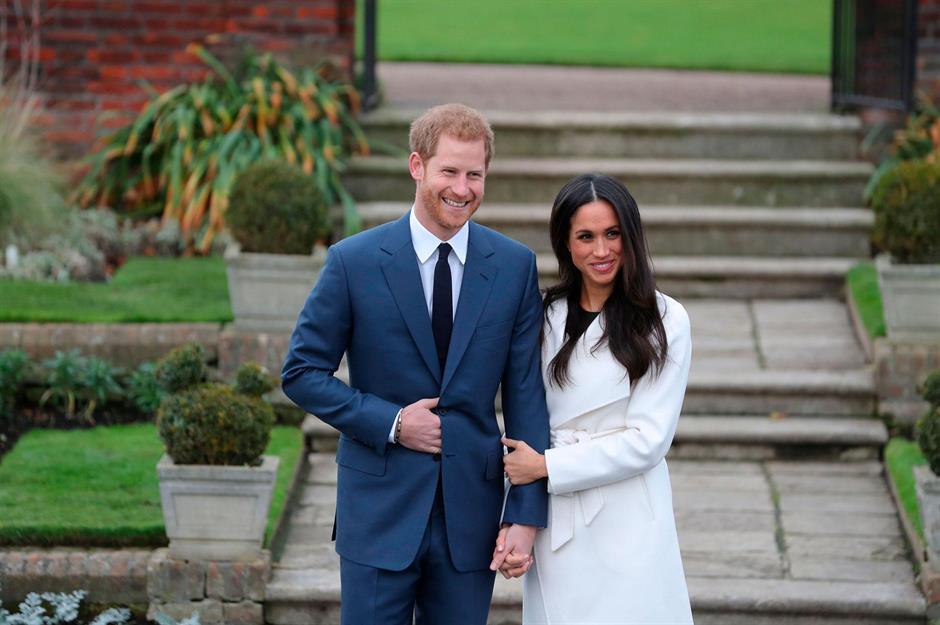 PA Dominic Lipinski/PA Images
After their big day, the newly appointed Duke and Duchess of Sussex also took up residence within the grounds of Kensington Palace in Nottingham Cottage, a 1,300-square-foot, two-bedroom property located within the palace's small cluster of red-brick cottages. Harry was already familiar with the property as he was using it as a bachelor pad before he married Meghan.

Google
The cottage is a considerable distance away from the main palace building and is located at the opposite end of the estate, which means Harry and Meghan will have plenty of privacy during the early stages of their marriage. As of yet, there are no plans for the couple to move into the main palace complex, however, this could change once they start their own family.

Dominic Lipinski/PA Images
The Duke and Duchess of Cambridge currently reside in Apartment 1A with their three children George, Charlotte – and one of the palace's youngest residents – Prince Louis. The apartment was given to the couple as an elaborate wedding gift by Queen Elizabeth back in 2013. But prior to this they lived in Nottingham Cottage, Harry and Meghan’s current abode.

Oli Scarff/Getty Images
The exterior of Apartment 1A shows it to be a red-brick Georgian-style structure with large glazed windows that look out onto the Kensington Palace gardens. The scaffolding to the left was put up in 2016 when the couple undertook a $6.2 million (£4.5m) refurbishment project to spruce up their home.

Dominic Lipinski/PA Images
This is as close as most people will ever get to William and Kate’s front door, which is located at the centre of Clock Court. The structure is clearly made up of four storeys, which consist of three floors and a basement. Their home features a typical Georgian townhouse stepped entrance.

Dominic Lipinski/PA Images
William and Kate’s apartment is said to have a total of 22 rooms containing two nurseries, three kitchens, three principal bathrooms and a basement. The interior design scheme is traditional, elegant and understated, with Georgian-style furnishings, hanging paintings and heavy curtains throughout. And with two master bedrooms located on the ground floor, the Duke and Duchess have broken with tradition by sharing a bed!

As another of the younger generation of the royal family - peers to princes William and Harry - we're excited to see what's next for the burgeoning brood. Could there be the pitter-patter of more new arrivals at Kensington Palace, the grandest multigenerational home in Britain?