Mind-blowing architecture that shouldn't work but does

Cutting-edge engineering has provided design visionaries with the muscle to reach for the sky. From a tower inside a giant tree to a collapsible skyscraper, these rule-breakers challenge the limits of architecture as we know it. Step this way and discover the projects pushing building innovation to its limit... 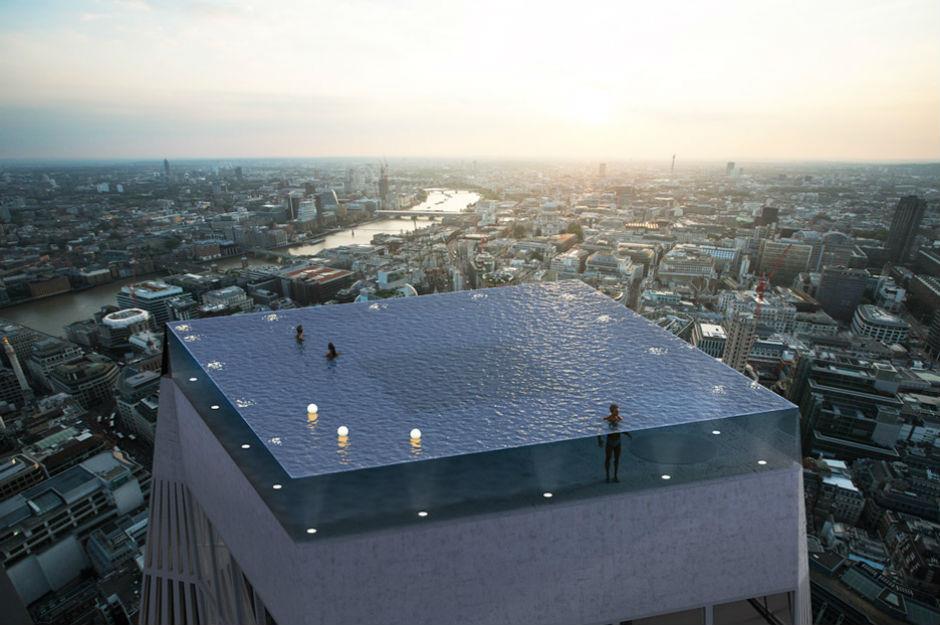 A death-defying 360-degree infinity pool has been proposed for London. Sat atop a 55-storey skyscraper and holding 600,000 litres of water, it'll be a swimming experience like no other. Because of the panoramic design, there are no sides or deck, so designers Compass Pools had to get creative when it came to accessing the pool. The solution? A custom-built hatch at the pool’s transparent base modelled on a submarine door, which will see a rotating spiral staircase rise from the floor when someone wants to get in or out. 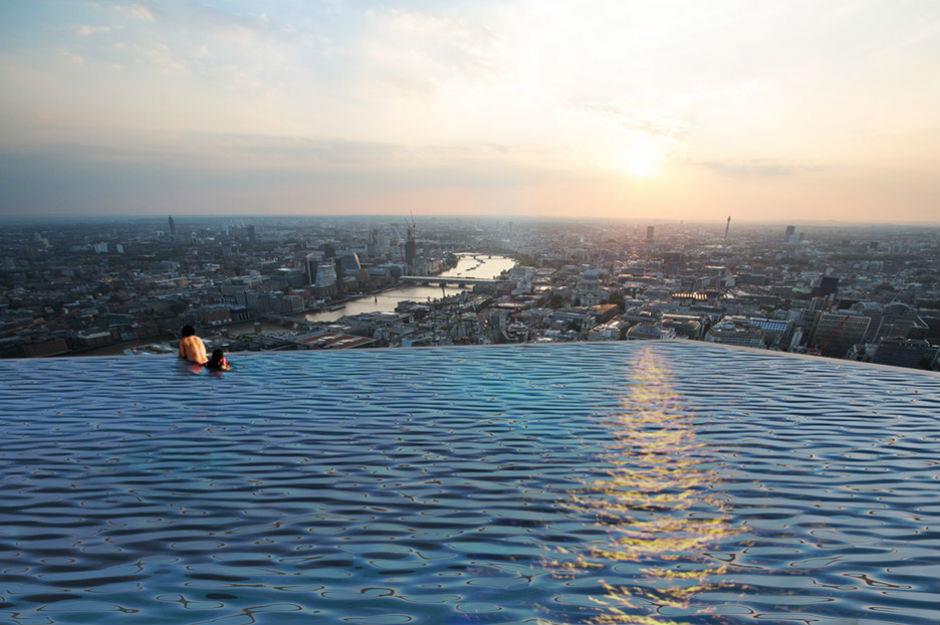 Although the location for the luxury Infinity London hotel has not yet been confirmed, the exciting technology that’ll help make the dream a reality has been revealed. A a computer-controlled system will keep the pool at an appropriate temperature and control any risk of water dripping off the roof and onto the streets some 722 feet below. There are also measures in place for sustainability, recycling hot air in the building’s air conditioning system to warm the pool.

Love this? Step inside the world's weirdest skyscrapers.

In March this year, Europe’s most exciting eatery opened its doors. The underwater restaurant Under in Lindesnes is the first of its kind on the continent. Part-submerged in the Atlantic at the southernmost tip of Norway, it cost £6 million ($7.5 million) to design and construct by architectural firm Snøhetta. The monolithic form not only breaks the surface but also acts as a tough concrete shell that, over time, will transform into an artificial reef, attracting marine life and improving the quality of the surrounding water.

Guests enter through a steel bridge and are then taken 16 feet below sea level. The heart-stopping structure’s pièce de résistance is the panoramic 396-square-foot window offering a direct view of the ocean and the ever-changing underwater landscape. And that’s not the only thing that will take your breath away: a full 18-course tasting menu plus drinks costs up to 3,700 kroner (£330/$410). 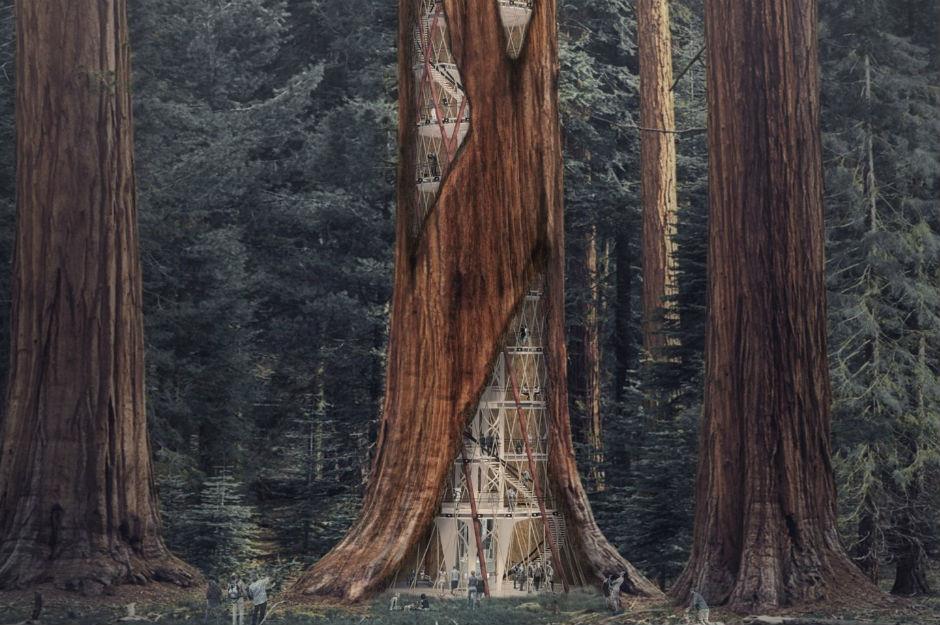 A team of South Korean designers have come up with a plan to save the endangered giant sequoias that only grow in the Sierra Nevada mountains in California. By inserting man-made towers into hollowed-out trunks, they can prevent the specimens with rotted heartwood from collapsing. The largest trees in the world measuring up to a titanic 279 feet high and spanning 20 to 24 feet wide, they're among the oldest living organisms on the planet. Some trees are estimated to have had lifespans reaching three millenniums! 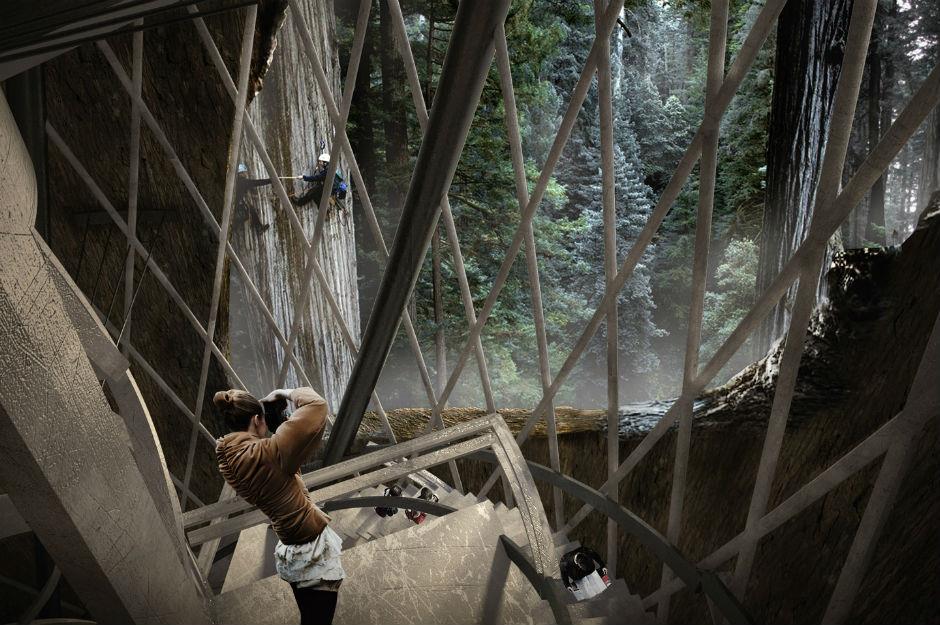 The towers designed by Ko Jinhyeuk, Cheong Changwon, Cho Kyuhung and Choi Sunwoong have a structural core running through the centre of the tree to act as an internal scaffolding. For additional support, a lattice-like cage sits underneath the thick bark, providing a functional space that can be used as an observation deck, as well as a venue for education and arts events. Named Tribute: The Monument of Giant, the project received an honourable mention at the 2017 eVolo Skyscraper Competition. 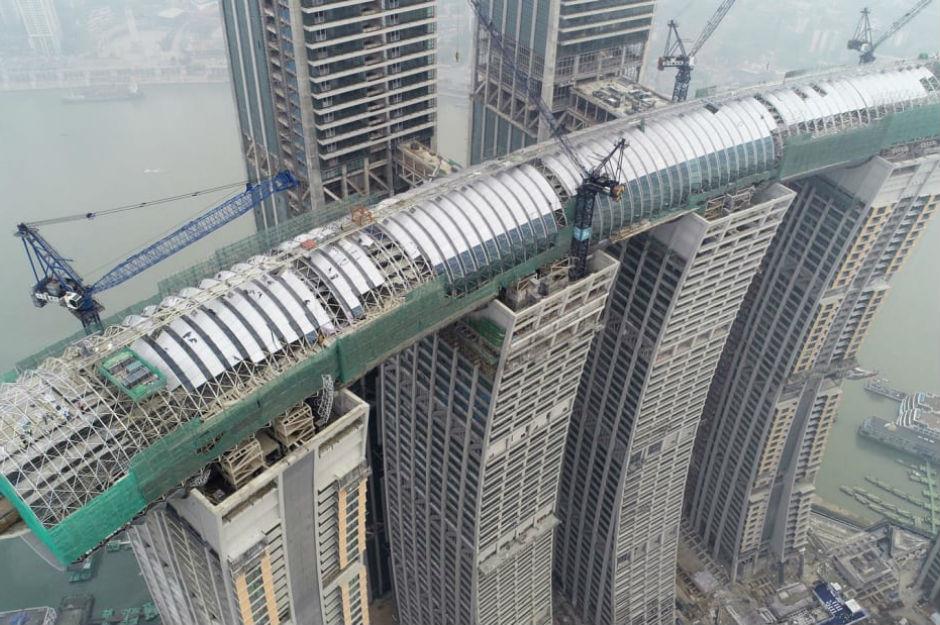 Part of the record-breaking Raffles City complex in southwestern China, Crystal is an architecturally marvellous 919-foot sky bridge that’s akin to a horizontal skyscraper. An incredible example of pioneering engineering, the Moshe Safdie-designed Crystal connects two of eight skyscrapers in the £3.1 billion ($3.8bn) megastructure. Yet it’s a destination in its own right too, comprising a sky garden, internal streets, an infinity pool, plenty of restaurants, plus what will become the tallest viewing gallery in western China. 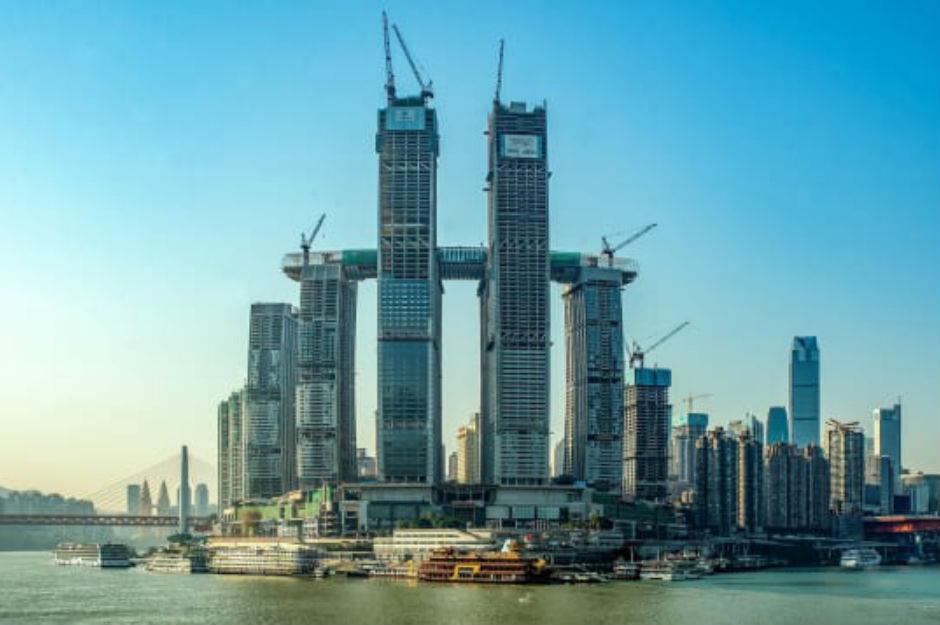 The design may seem futuristic but it's actually rooted in the past, inspired by Chongqing’s historic legacy as a dockland trading centre. And, if the mind-boggling suspension wasn’t enough, Crystal is completely different by dark. When night falls, the horizontal skyscraper transforms into a light beam that illuminates the city skyline.

Love this? Check out the tallest skyscrapers still to come in 2019. 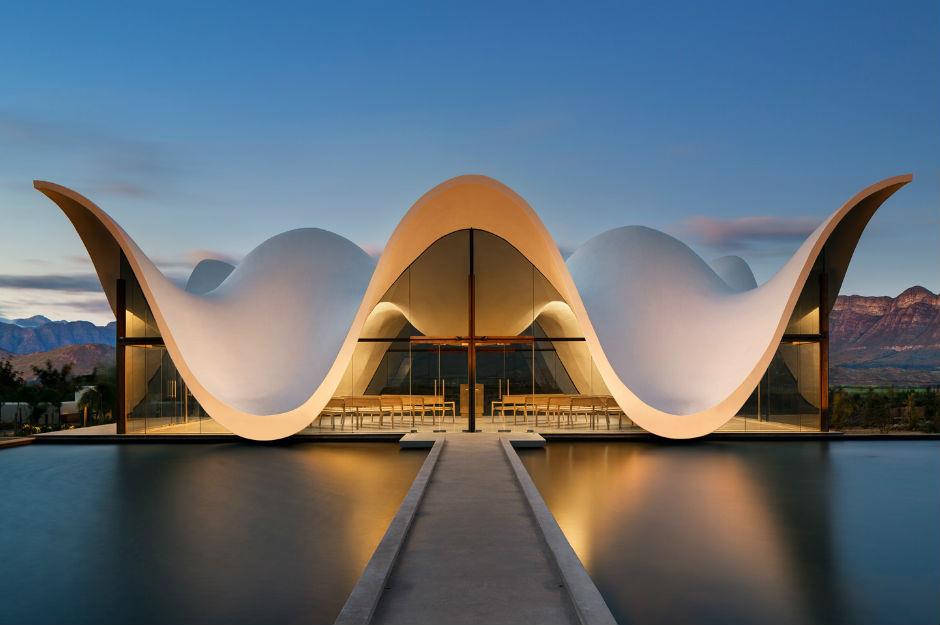 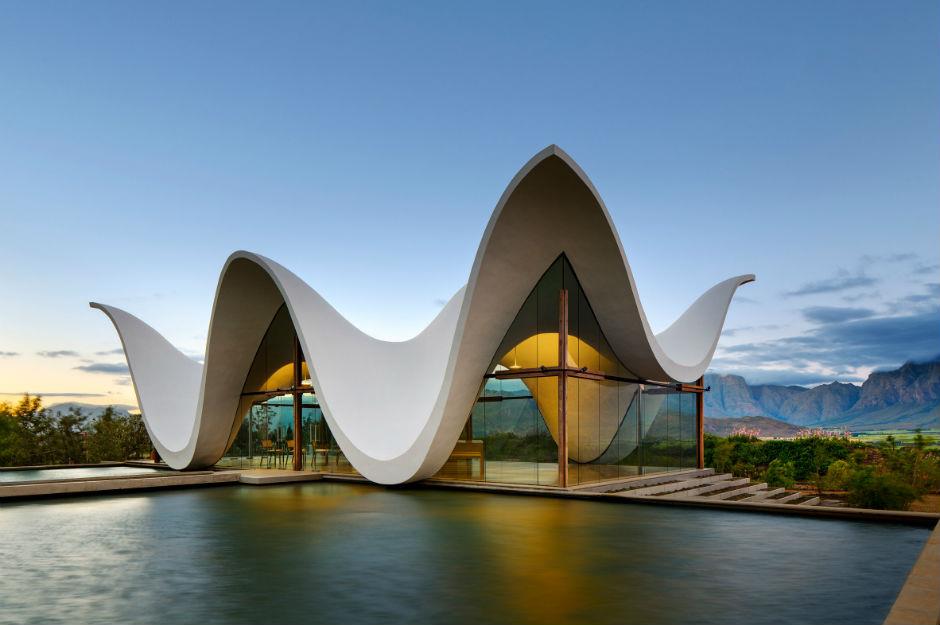 The white canopy appears to float weightlessly thanks to the glazed supports and encircling pool of water. Each pane of glass is held in place with a cross-shaped framework, and worshippers are treated to views across picturesque vineyards and pomegranate orchards.

Winner of 2018’s eVolo Skyscraper Competition, Polish architectural team Damian Granosik, Jakub Kulisa and Piotr Pańczyk thought up a collapsible skyscraper as part of a relief programme for those living in remote disaster zones. Skyshelter.zip can be folded down and delivered by military helicopter before anchoring. Then a load-bearing helium balloon makes the magic happen, lifting the tower off the ground and raising it to the sky, growing the walls of Skyscraper.zip, which are made from a fabric folded into accordion-style panels.

Anchored in place by steel wires strong enough to withstand hefty winds, the structure can also produce clean energy with tiny solar panels embedded around its frame and a rooftop damn that collects and filters rainwater. Inside, Skyscraper.zip will be a one-stop shop for all disaster relief needs, with supplies stacked on top of each other instead of in traditional tents or containers which take up to 30 times more room. A reception area, first aid response, temporary housing, storage space and even a vertical farm can be found in just one of these collapsable skyscrapers.

The Dancing House, also known as Fred and Ginger, is the nickname for the Nationale-Nederlanden building which protrudes proudly from the Rašín Embankment in Prague. Designed and completed in the 1990s, the architects Vlado Milunić and Frank Gehry envisioned a non-traditional design that disrupted the traditional buildings which dominate the Czech city.

The Dancing House’s dynamic shape is rooted in the idea of yin and yang. They architects conceived a house in two parts: a narrow glass tower supported by curved pillars, and a structure built using 99 concrete panels and adorned with 3D-effect windows. The nine asymmetric floors of the building house a hotel, restaurant, art gallery and office space. 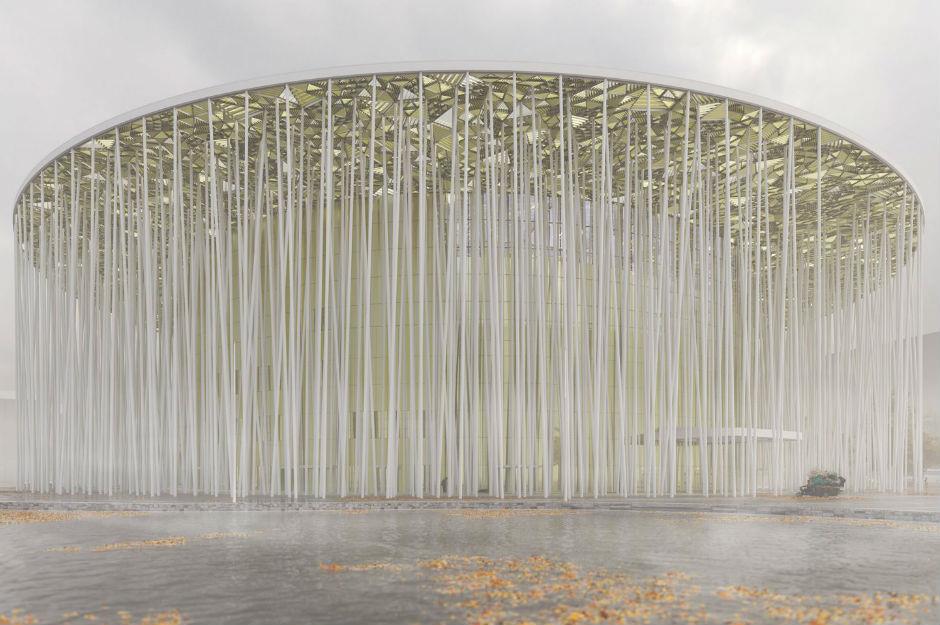 Inspired by the Sea of Bamboo – a national park near the eastern Chinese city of Wuxi, home to one of the largest bamboo forests in the country – the Wuxi Show Theatre is a woodland in itself. The golden roof is made from faceted slabs held up by slim white columns, angled to draw in light and air but block rain and direct sunshine.

Love this? Check out these awesome buildings inspired by everyday objects. 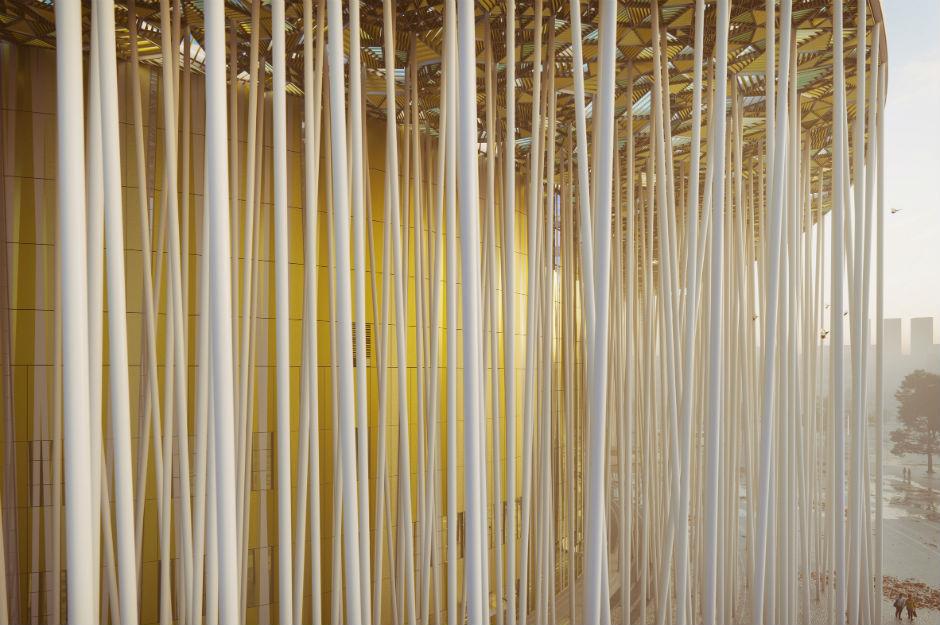 Because of the clever positioning of the louvres, sunlight streams through the cutout shapes, creating a moving pattern for visitors who step beneath the canopy. By night, artificial light beams up from below, illuminating the roof of the 2,000-capacity venue. Designed by Steven Chilton Architects, the Wuxi Show Theatre will hold its opening night in December 2019. 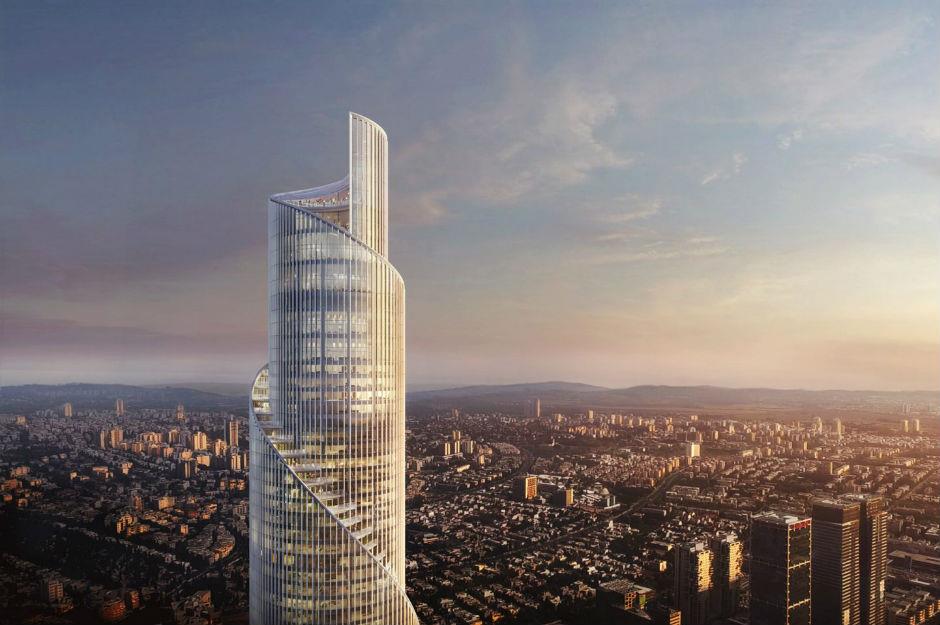 Soon to reign over Tel Aviv as Israel’s tallest building, this towering skyscraper has an intriguing design to boot. Part of the larger Azrieli Centre, the 781-foot Azireli Tower takes the form of an unfurling scroll, an illusion created as its spiralling exterior gradually narrows at the top of the building. 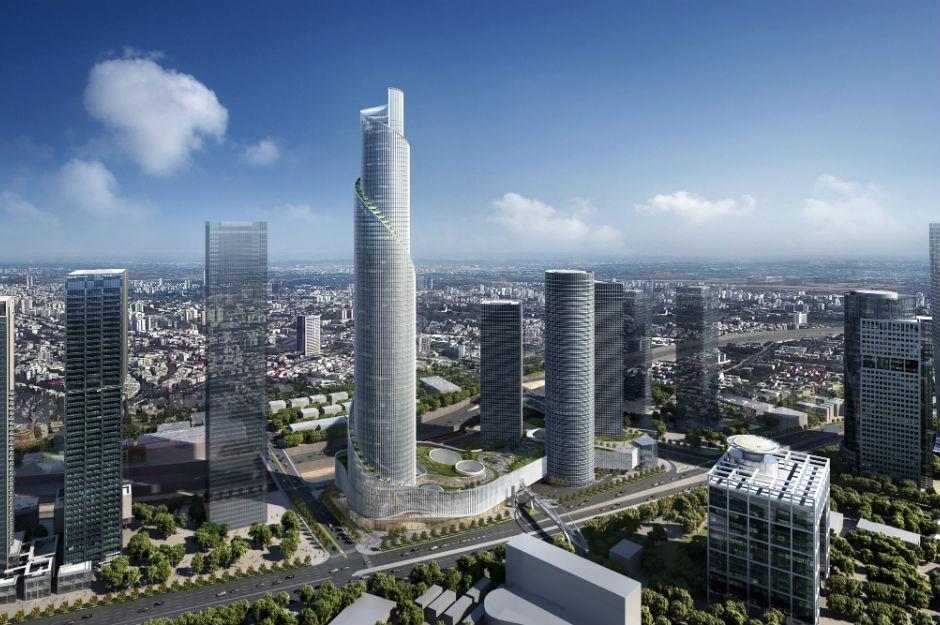 Designed by Kohn Pedersen Fox, the Azrieli Tower will become home to a wealth of amenities including a metro station, offices, luxury apartments, a hotel and retail opportunities. Go all the way to the top and a public viewing area grants access to views of the gleaming Mediterranean and, if the day is clear enough, Jerusalem in the distance. 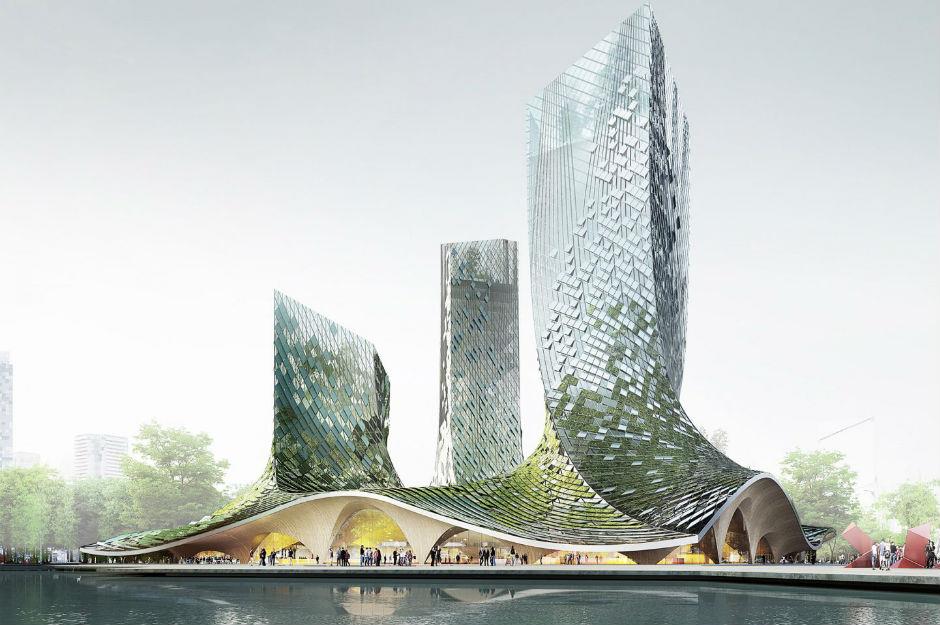 With their rippling, scaley exterior and the greenish tint, these towers by XTU Architects have been compared to serpents. Their distinctive colour comes from micro-algae that's encouraged to grow on the glass panels, providing natural insulation, oxygen and absorbing carbon dioxide. Known as the French Dream Towers, the design is soon to be patented as groundbreaking bio-architecture. The algae growing on the facade will be used in everything from medicine to cosmetics. 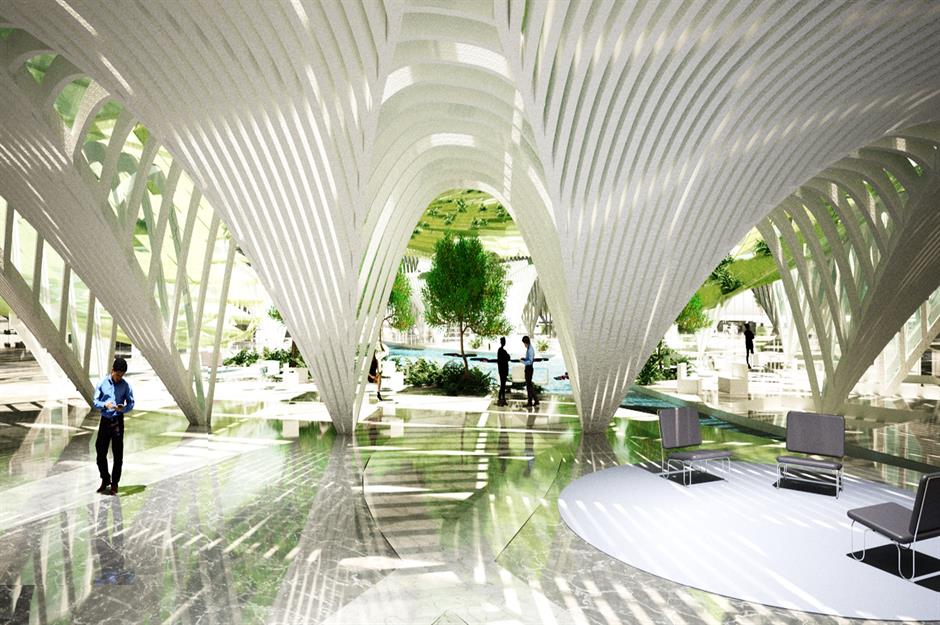 And the eco approach doesn’t stop there either, with the rainwater that runs off the towers collected in carefully-placed basins to be recycled and reused. There will also be vegetation and trees throughout the complex, including on the rooftops, to help filter the air and provide a leafy respite for visitors to the towers’ restaurants, bars, co-working spaces, hotel, spa, beauty salon and art gallery.

Love this? Step inside these sky-high vertical villages of the future. 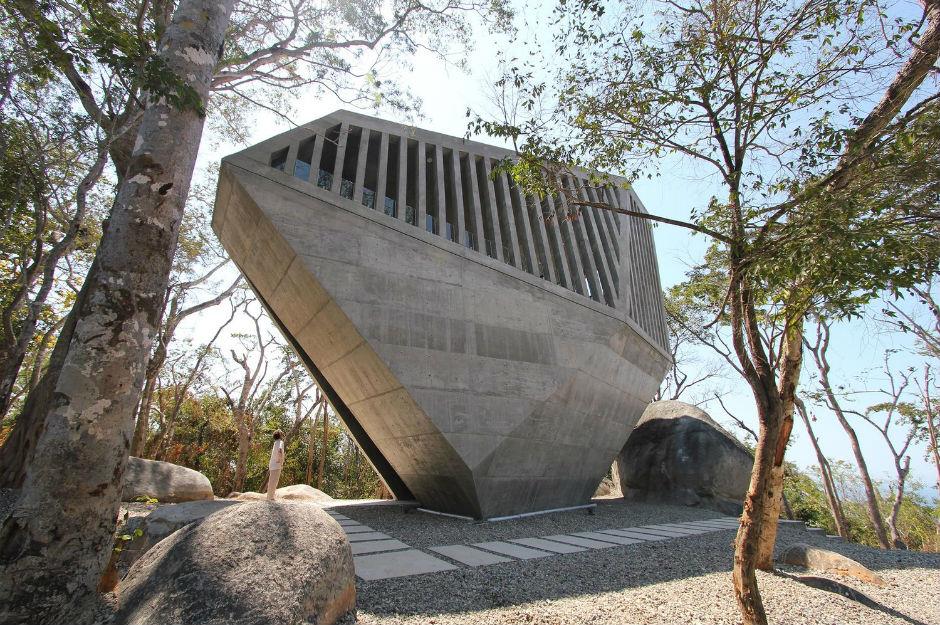 Perching on the seat of Acapulco Bay, you’ll find a chapel that seems to defy the laws of gravity. The sternly faceted concrete structure looks as if it’s balancing on the nearby rocks, looming over worshippers as they enter through the aperture. Yet you won’t be alone here: the edifice is also home to a mausoleum with crypts located outside and around the chapel. 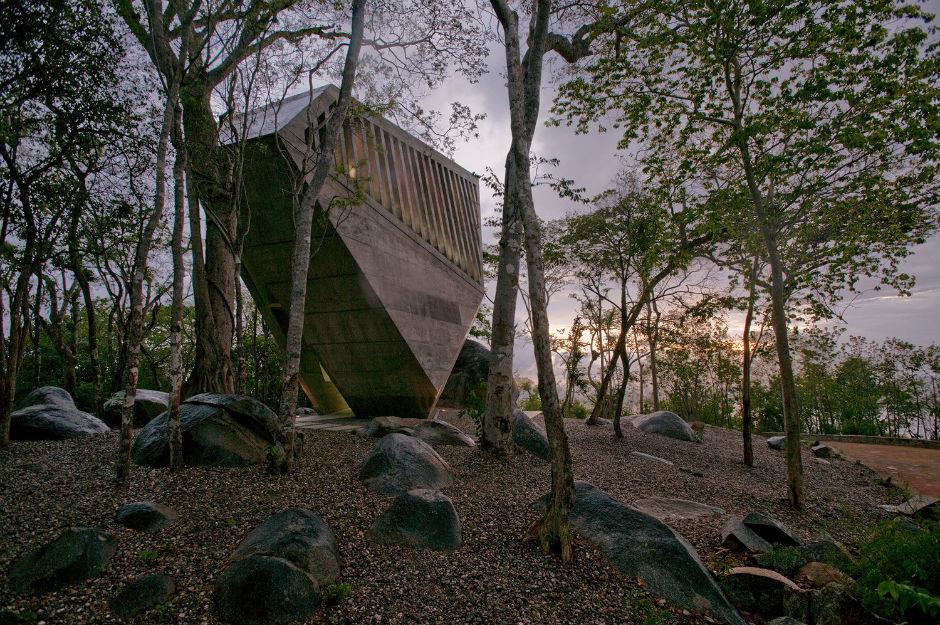 Inside, there are large, airy slits in the walls for onlookers to peer out of, providing views of the Pacific coastline and allowing beams of light to illuminate the concrete pews. The interior is oriented towards a glazed wall which holds a crucifix. Architectural firm Bunker Arquitectura were instructed that the sun had to set exactly behind the altar cross, a sight that's seen two times a year at the equinoxes.

When director Rawson Marshall Thurber made the 2018 summer blockbuster Skyscraper starring Dwayne Johnson, he strived to make the architectural star of the show completely unforgettable. He called on the talents of Chicago-based architect Adrian Smith (who designed the tallest building in the world, the Burj Khalifa) to bring his vision to life...

The imaginary skyscraper stands 240 storeys above Hong Kong, delicately cradling a sphere at the top, from which the structure's name – The Pearl – was born. Weighing one million tons, it would reach a staggering 3,497 feet, thus categorising it as megatall tower – a step above your average skyscraper. Features detailed in the design are equally as intricate, describing pressurised safe rooms with reinforced fireproof concrete and an array of elements to protect against natural disasters, including gale force winds and earthquakes.

Created by the team behind The Shard and 432 Park Avenue, Tetra Hotel is a design for futuristic hotels in remote and geographically diverse locations. The building is made from modular groups of concrete pods that bolt onto the rock foundation and interlink with one another for stability. This will give the diamond-shaped, 62-foot pods a teetering appearance and allow for a flexible design, responding to the unique terrains they call home.

Inside, the interiors will be spread across a multitude of levels connected by stairs. Built with a customisable facade, elements of the pods can be glazed to create huge skylights in the communal spaces of the Tetra Hotel. The concept allows for 42 suites, plus heaps of luxury amenities such as bars, restaurants and exhibition spaces in potential sites across Cape Verde, the UK, Norway, Canada, New Zealand, Spain and more.

Loved this? Discover the incredible homes hidden inside the world's tallest skyscrapers.