Take a tour through a top-secret abandoned mansion 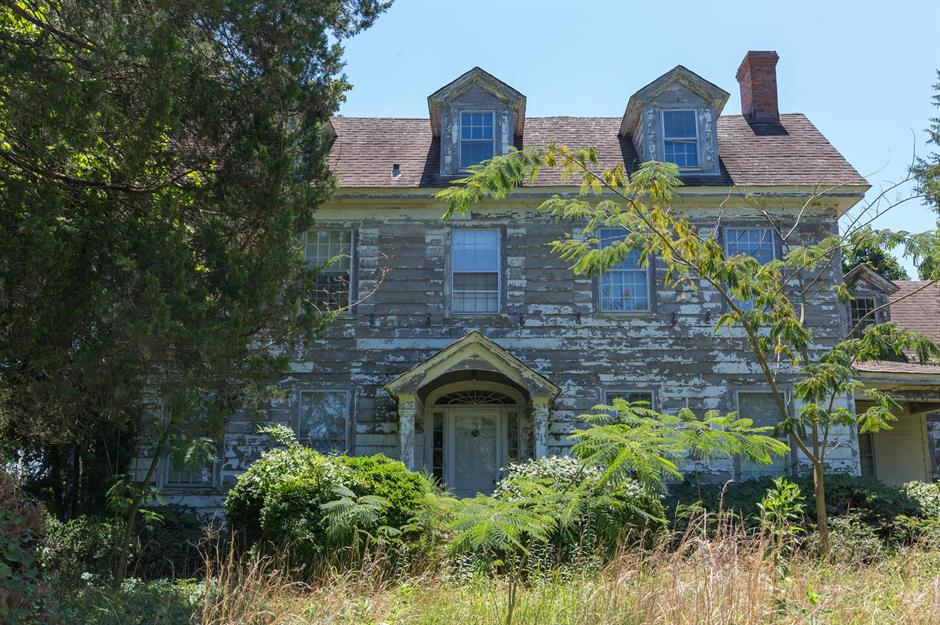 Sworn to secrecy, abandoned buildings photographer Bryan Sansivero was recently granted access to this alluring Federal-style house in Virginia on the proviso he wouldn't reveal its exact whereabouts. Packed with fascinating Americana, the home is a real gem and locals are keen to keep its precise location strictly confidential lest thieves break in and steal the precious contents. Take a tour around the property and see what all the fuss is about. 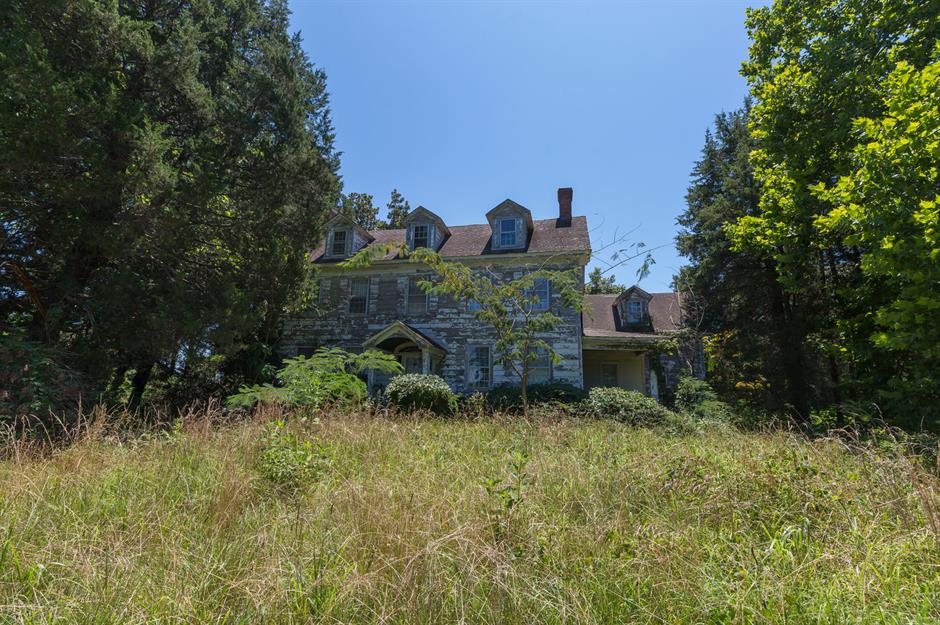 Tucked away from the main road behind a group of leafy mature trees, the once-handsome clapboard house is completely hidden from view and virtually unknown to anyone apart from a small number of locals. Photographer Sansivero heard about the property through a group of explorers from the area and had to battle through the overgrowth to gain access. He discovered that the former owner and members of his family are buried in a graveyard in the back yard. 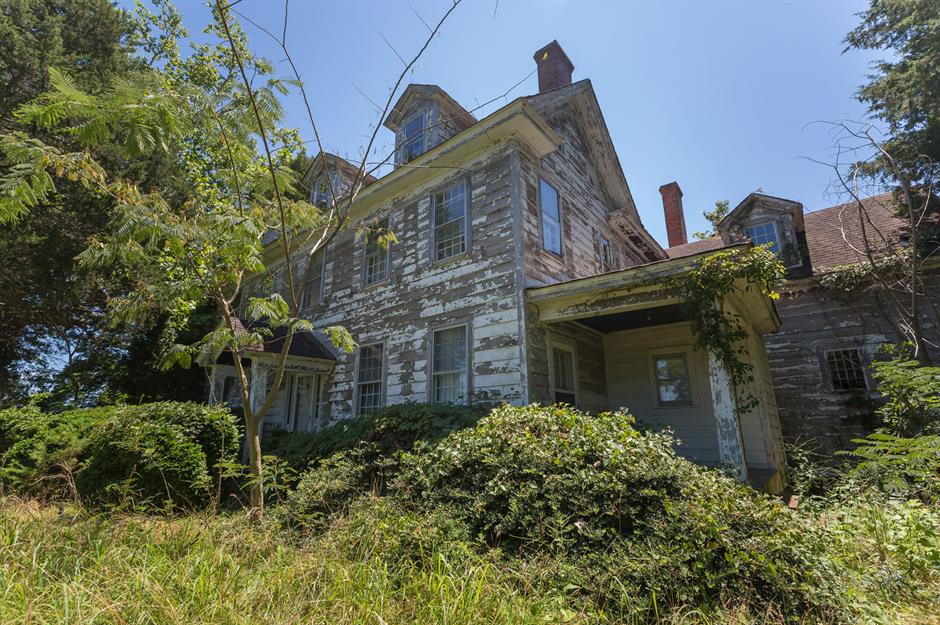 Built in 1929 as a replacement for a mansion constructed a century earlier, the frame building was the home of a prominent educator and heavyweight politician, who lived here together with his wife and children. An alumnus of the venerable College of William and Mary, the former owner, who died in the late 1970s, is notable for supporting the desegregation of the Virginia school system during the 1950s and 1960s.

Stepping inside the house, you are transported back in time. The first room you encounter is the parlour, which would have been used to receive guests, and it's furnished with formal antique furniture such as this Eastlake fainting couch. Here, as in all the rooms of the house, everything is still in place, even the portraits on the wall.

Love this? Explore this abandoned old house, untouched for 40 years 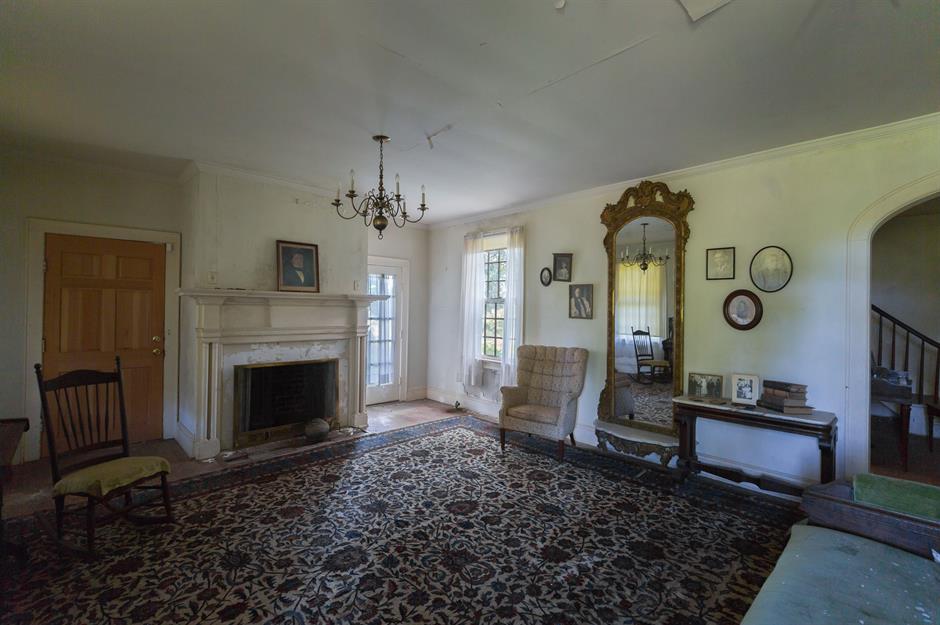 The parlour also boasts a fine marble fireplace and enormous Persian carpet, which almost covers the entire hardwood floor. A brass chandelier graces the ceiling and an ornate gilt mirror takes pride of place on the wall that faces the front door. 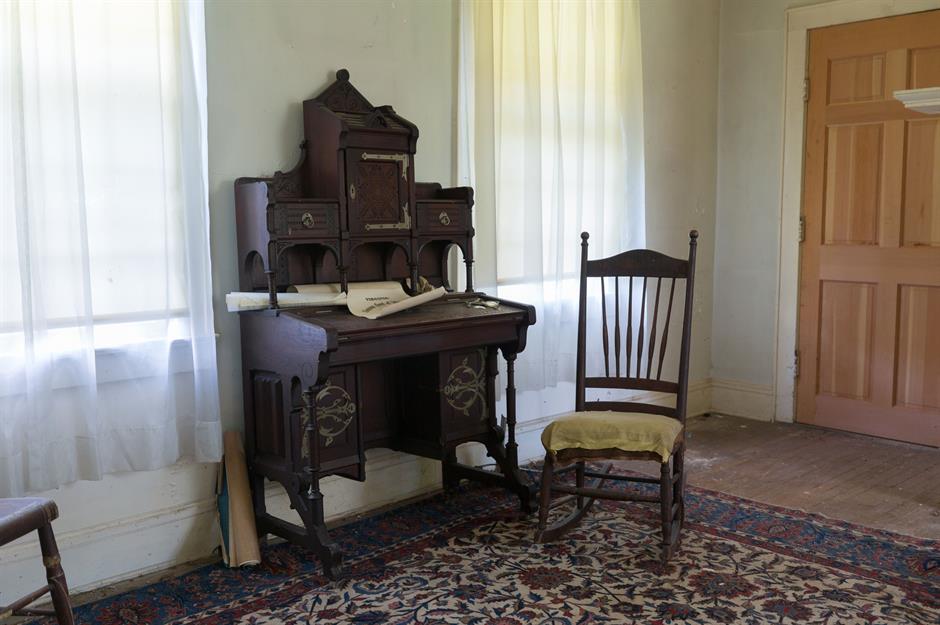 A Modern Gothic writing desk by New York firm Kimbel and Cabus sits in the elegant room. The highly collectable oak bureau, an exquisite piece of Americana, dates from the 1870s and is worth a considerable amount of money. There's a similar piece in The Met Museum of Modern Art. 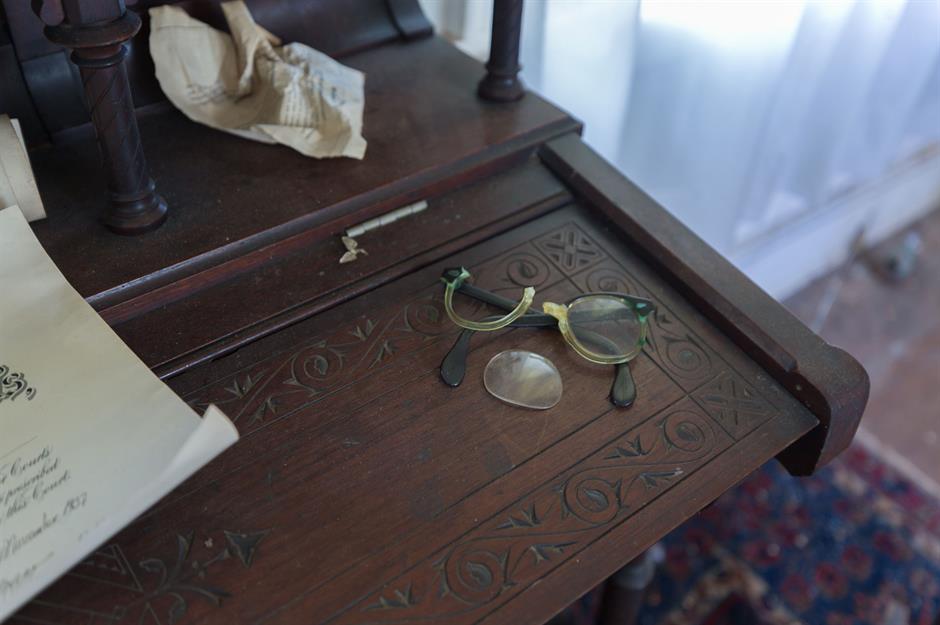 In fact, a lookalike bureau decorated with the firm's signature medieval-inspired ornamentation sold at auction recently for $1,900 (£1.5k). An old document lies on the projecting writing shelf together with a broken pair of spectacles. 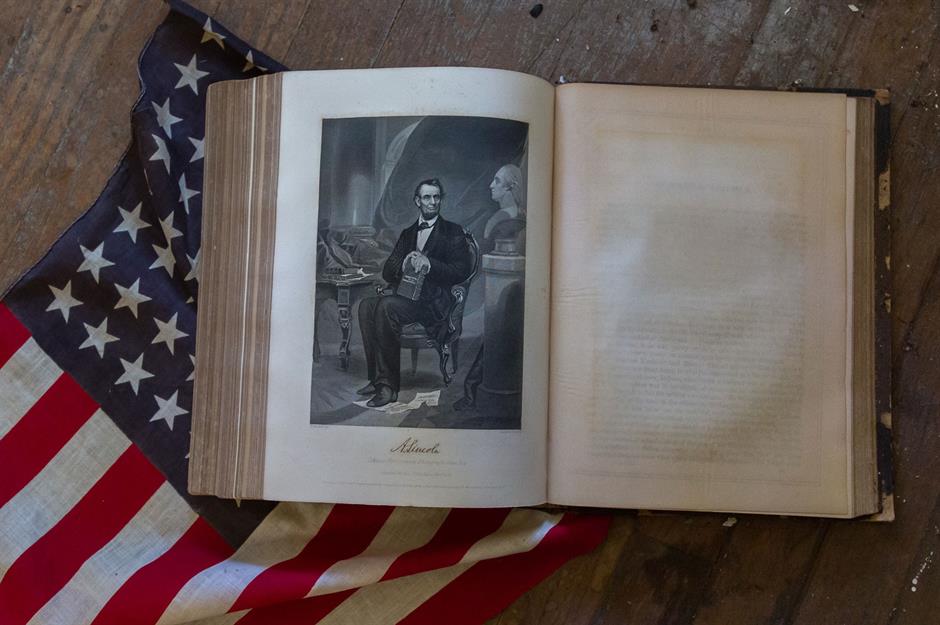 The house was the home of a powerful politician and they were an educated and erudite family with a grasp of the goings-on in Washington. There are plenty of old books dotted about the place: here, a detailed etching of President Lincoln is found in one of their editions, that looks to be over 100 years old. The owner and his family were fervently patriotic if these objects are anything to go by. 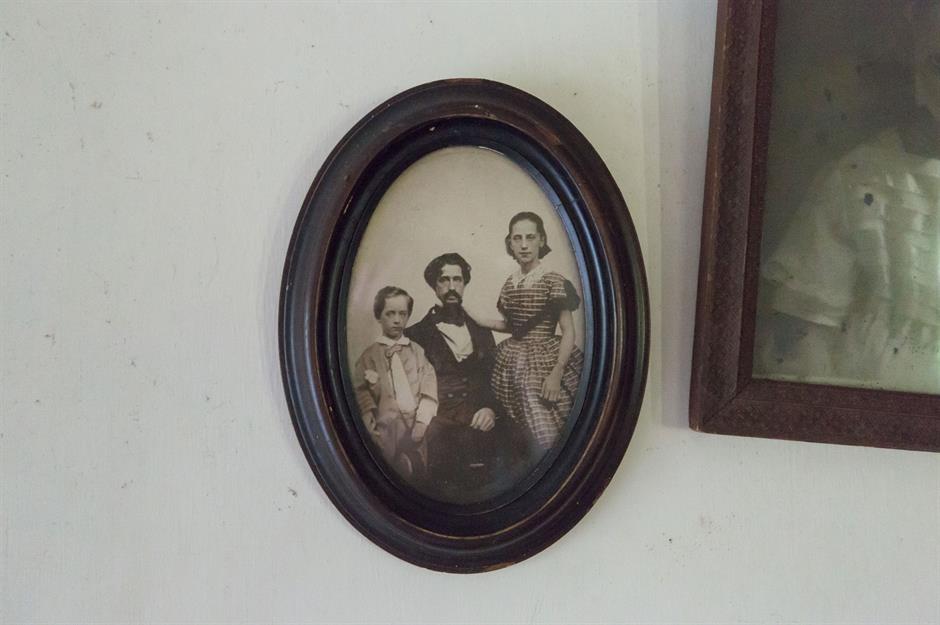 Old family photographs decorate the walls of this and other rooms in the house. Judging by the clothing the trio are wearing in this daguerreotype, the picture was taken sometime during the 1860s, around the time of the Civil War. 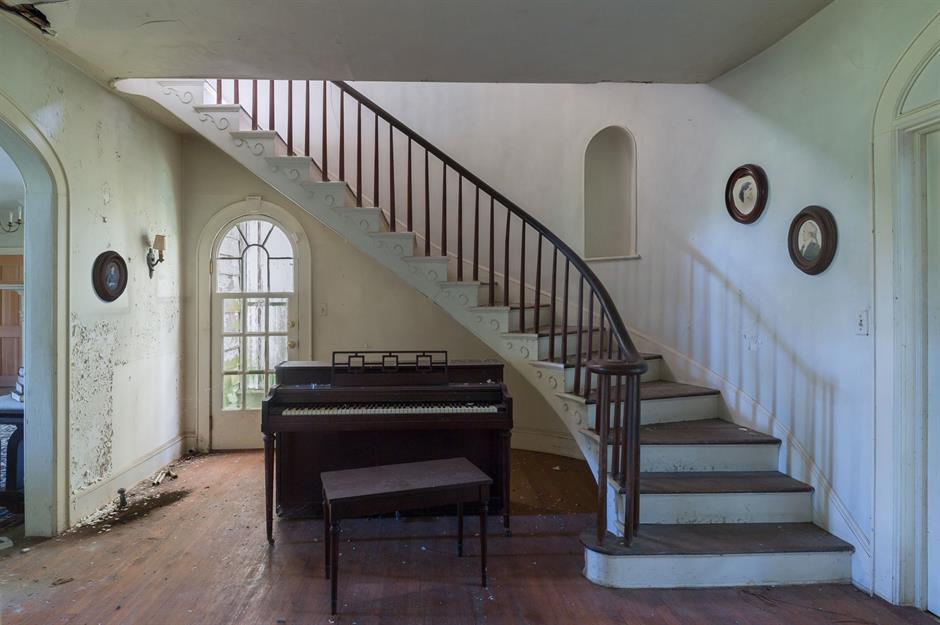 Moving into the hallway, you can't fail to be impressed by the sweeping staircase. An upright piano sits in the room, waiting to be played again. Paint is peeling off the walls, though the structure of the building looks more or less in decent shape. 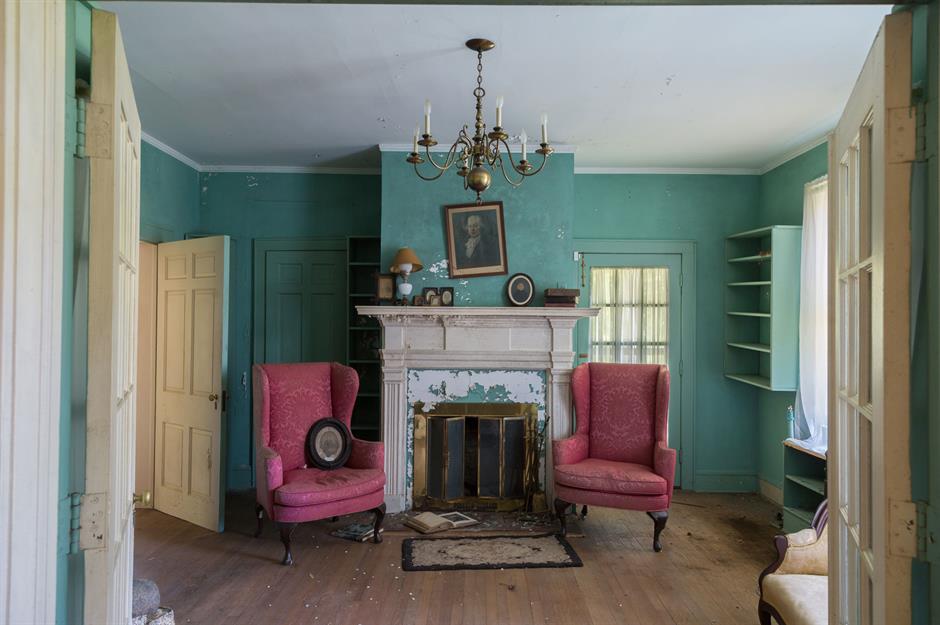 A compact sitting room, which would have been used by the family for relaxing, perhaps as a quiet place to read a book or warm themselves by the fire, is located off the main hallway. Like the parlour, it features a brass chandelier and has been painted in a bold shade of sea green. 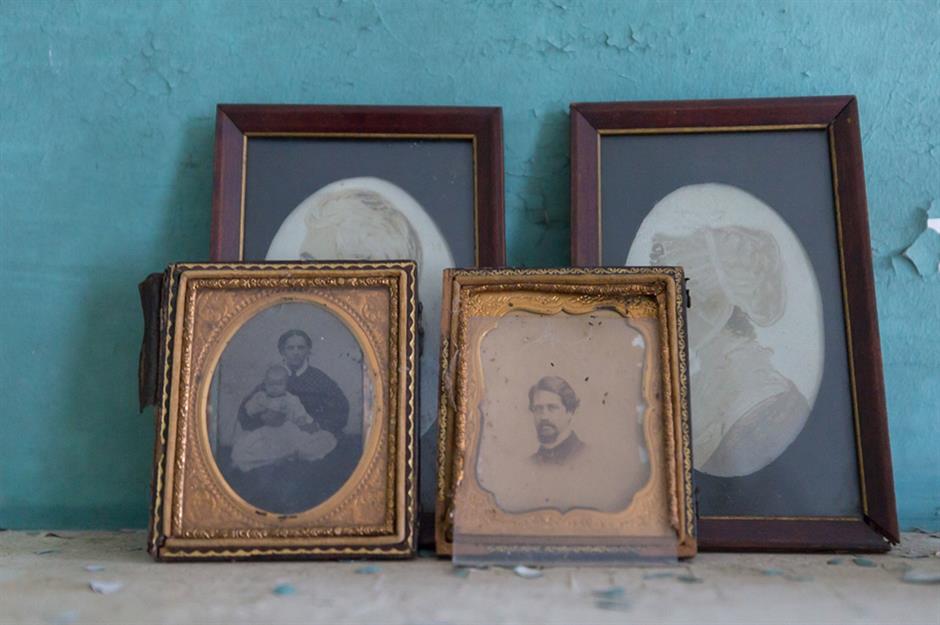 A pair of family photographs in gilt frames rest on the mantelpiece. Again, they appear to have been taken around the 1860s. Behind them are a couple of profile portrait miniatures showing a lady and gentleman in 18th-century dress. 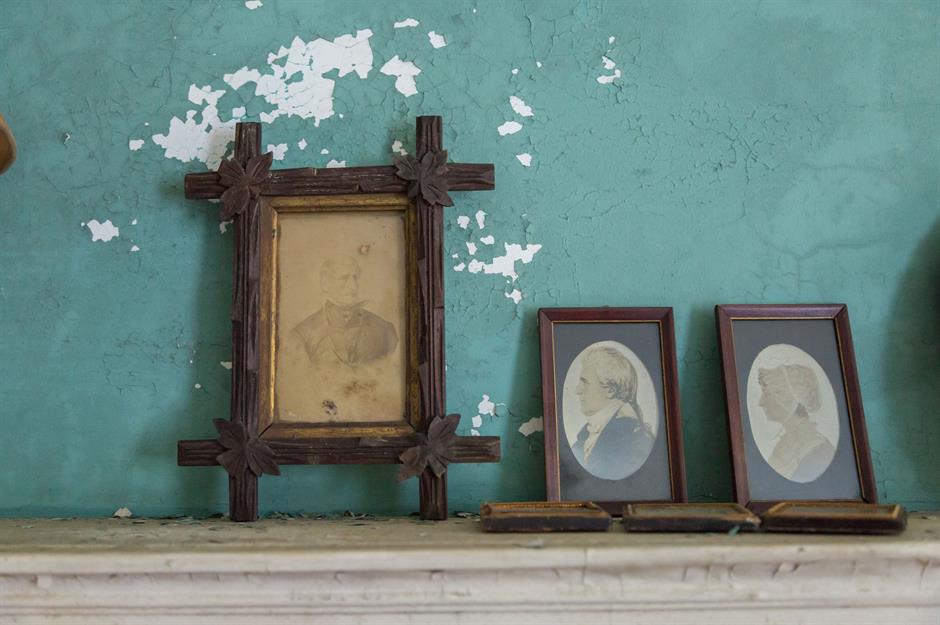 The profile portrait miniatures are shown in all their glory in this shot. The photograph to the left is displayed in an Adirondack Eastlake picture frame with corner leaf motifs, a style that was popular in the 1890s.

Intrigued? Take a look at this stunning abandoned house inspired by Oscar Wilde 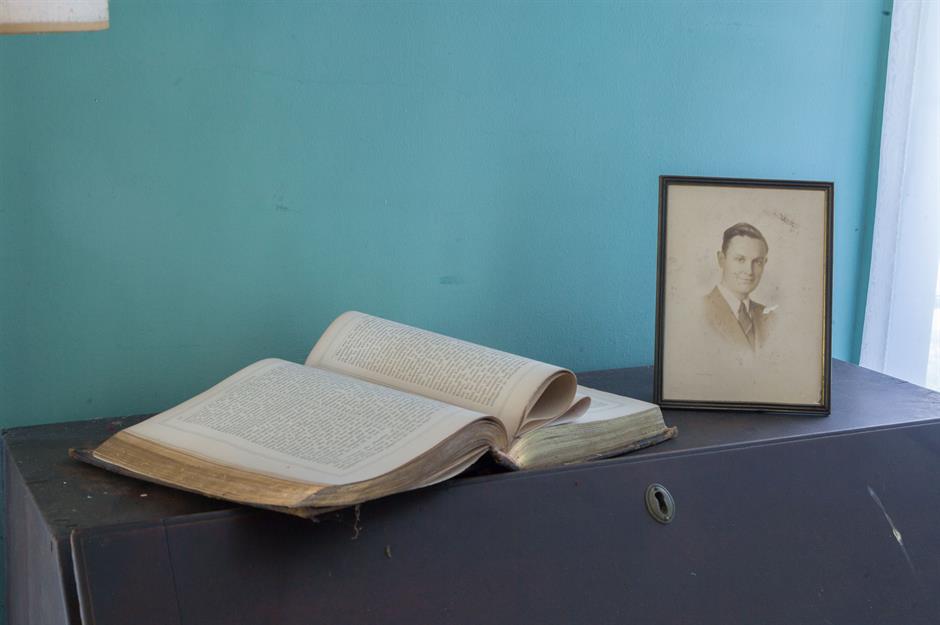 The room also features a neat writing bureau. The family who lived in the house would have had a lot of correspondence and so a place to compose letters would have been essential. Another photograph of a young man – probably a member of the clan – is shown here. More modern than the earlier picture, it appears to have been taken in the early to mid 20th century. 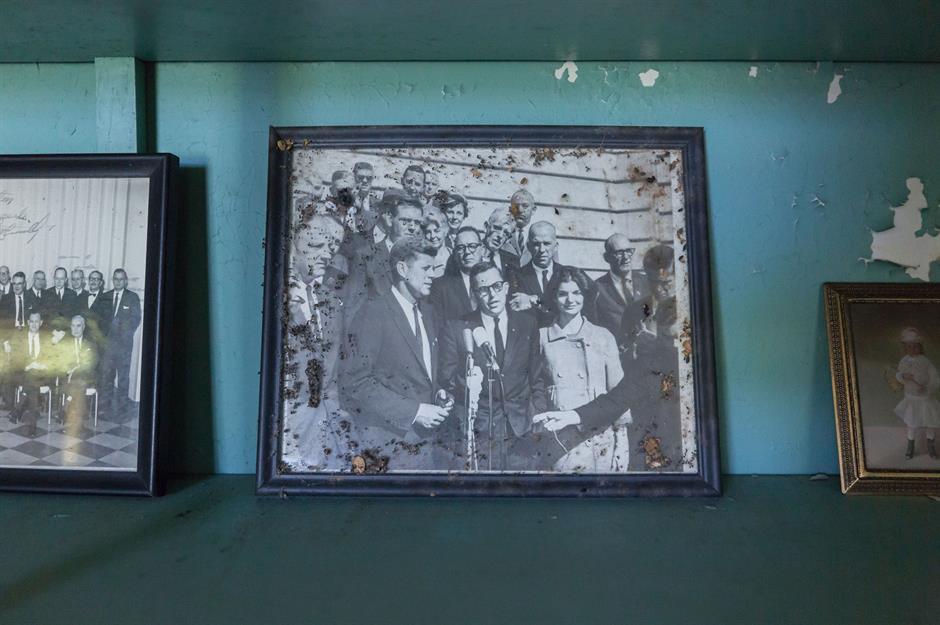 Given that the patriarch of the family was an important politician, it follows that there are numerous photographs of former presidents and other dignitaries. Among the collection is this black and white photo of President John F. Kennedy with his wife Jackie. The former owner was a member of an organisation that worked on the Democratic president's 1960 election. 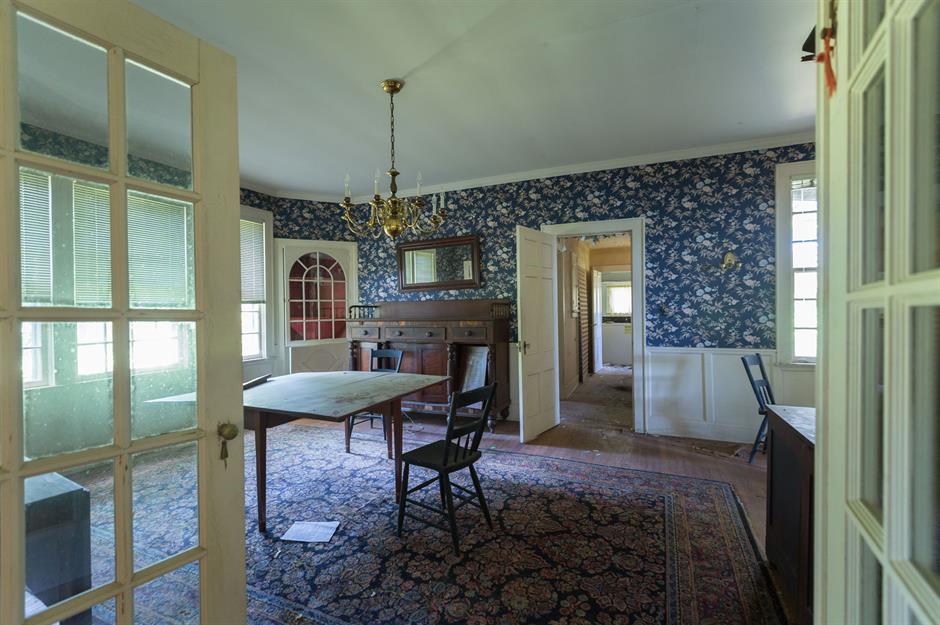 The home's dining room has yet another extra-large Persian carpet, elaborate floral wallpaper and a brass chandelier. The room is also furnished with a sideboard, which like the writing bureau in the parlour, looks like the handiwork of esteemed New York furniture makers Kimbel and Cabus. 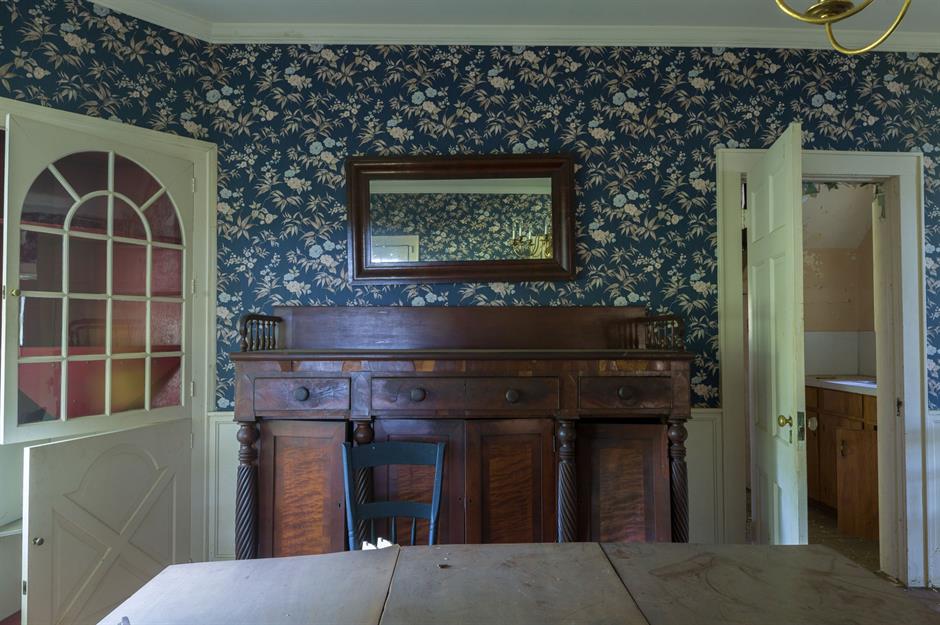 The floral wallpaper appears to be a pretty recent addition given the good condition it is in. The room also has a built-in corner cabinet, which would have been used to show off the family's china collection. 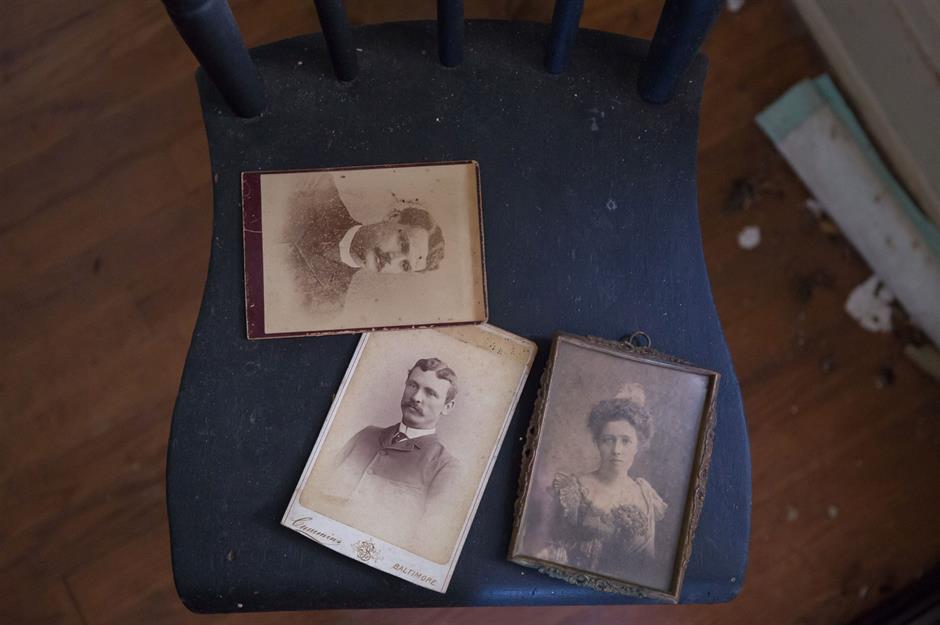 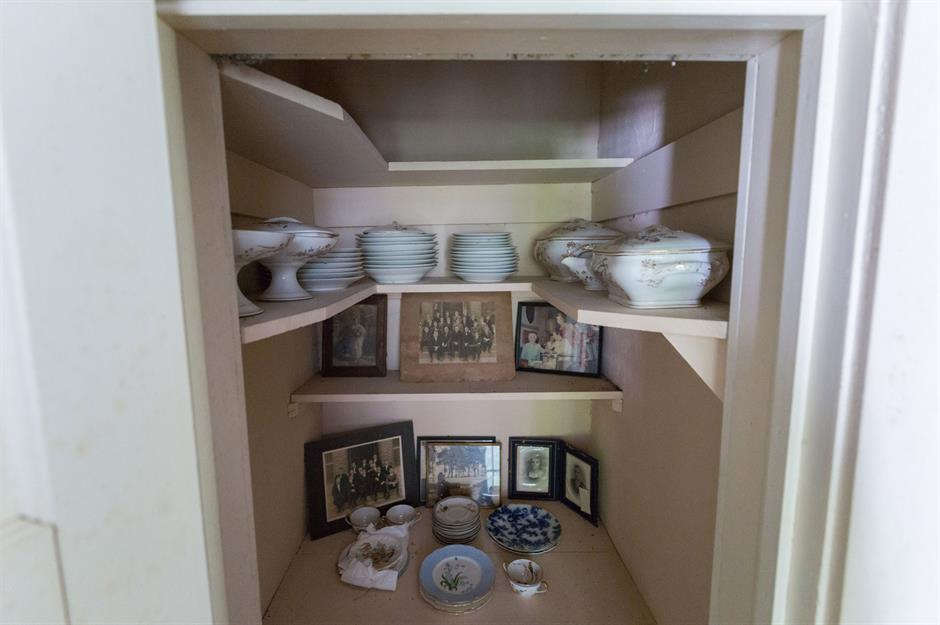 Looking into this cupboard, you can catch a glimpse of some of the family's china pieces. They include a white and gold floral set and various dainty porcelain plates and teacups. It's unusual to find so many beautiful objects in place at one of these abandoned houses, one of the reasons that the location must be kept a secret. 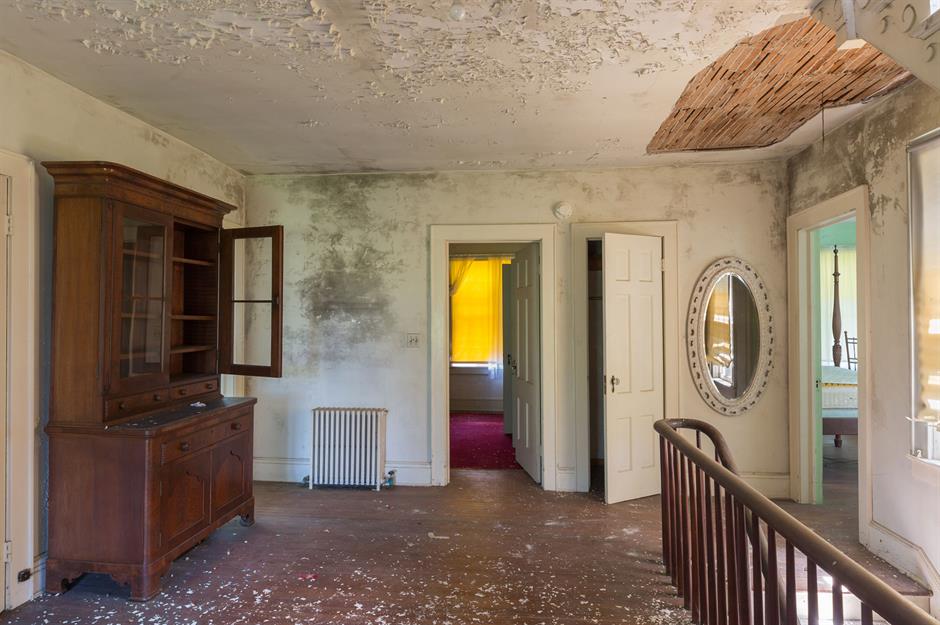 Out of all the rooms in the house, the upstairs landing looks to be in the worst shape. The plaster has come away in parts from the ceiling, the paintwork is peeling and there are signs of damp on the walls.

Want more? Take a look at the mysterious abandoned mansion rumoured to be built on gold 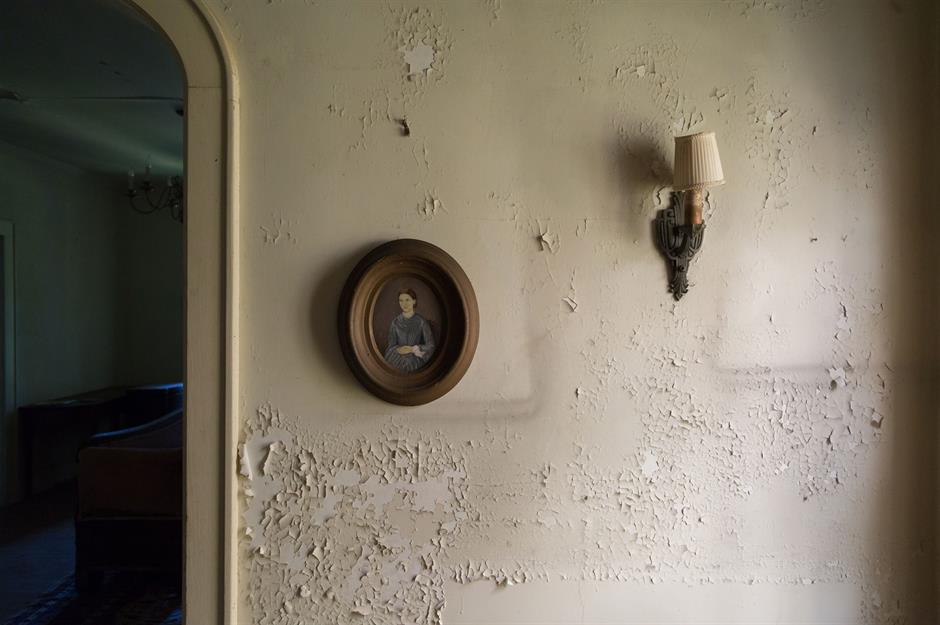 A family portrait presumably from the Victorian era adorns this tired-looking wall on the upper landing next to a beautiful arched doorway. It has been placed near a decorative wall sconce, which appears to be American Art Nouveau in style. 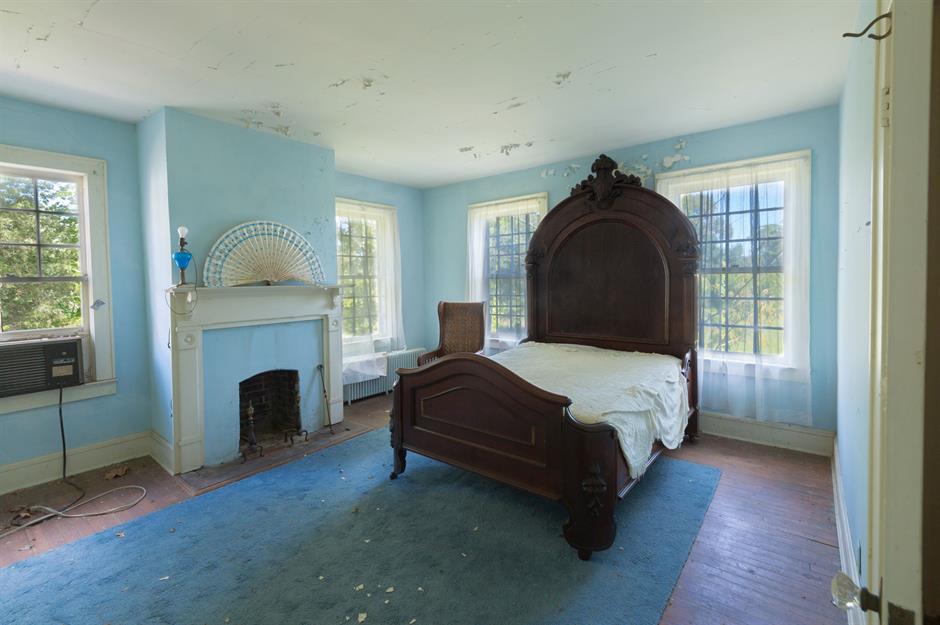 The blue-hued master bedroom is dominated by a spectacular solid oak Eastlake bed. These designs are characterised by their extra-tall headboards, which make quite a statement. It probably dates from some time during the late 19th century. 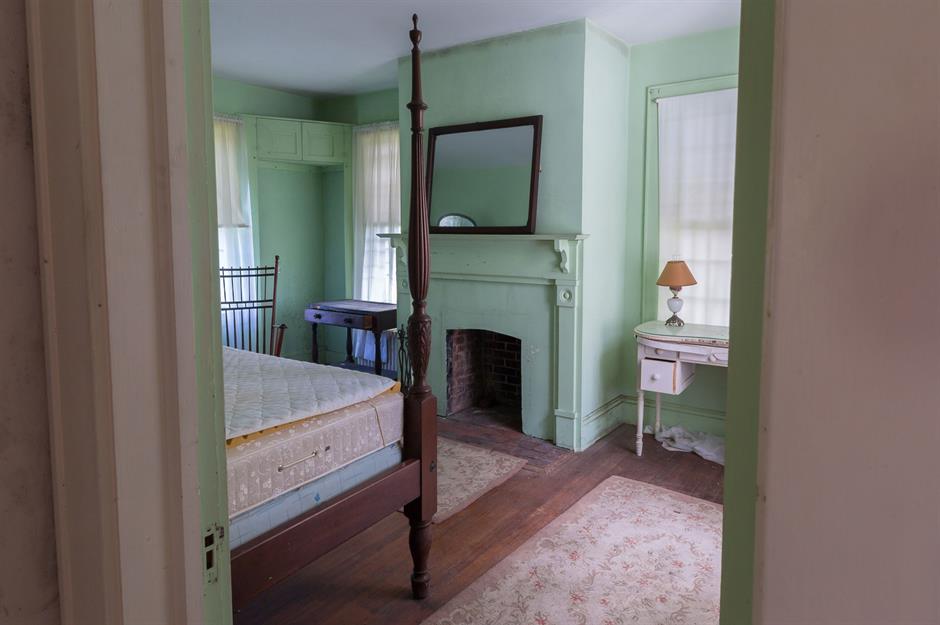 This smaller bedroom contains another attractive wood four-poster bed. Again, it is likely to have been crafted during the late 19th century. Like most of the rooms in the house, the bedroom has its very own fireplace, an essential in the days before central heating. 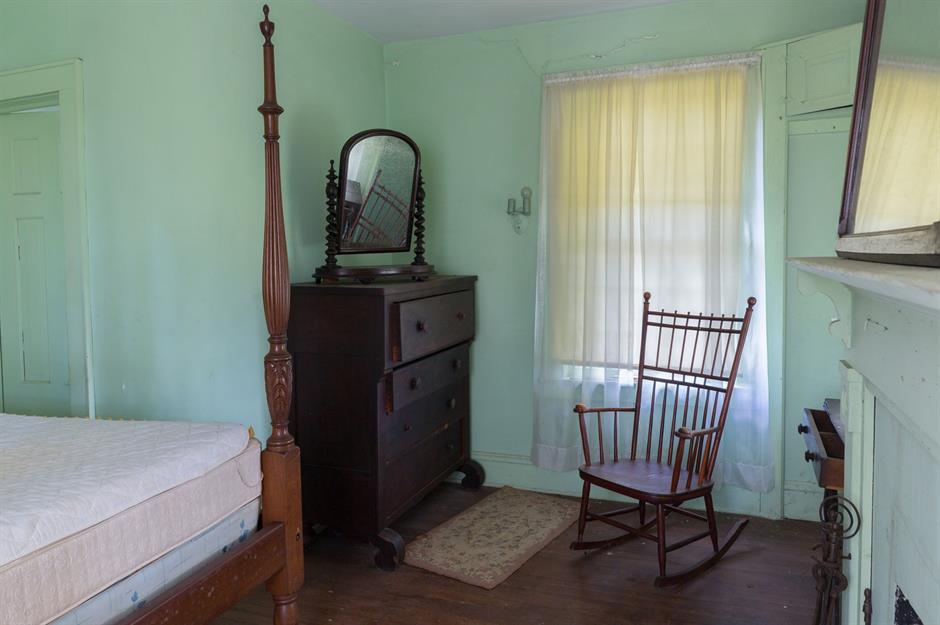 The other furniture in the room includes a chest of drawers with claw legs, a white dressing table and tile-top washstand, not to mention a rustic rocking chair. Note the wrought iron poker beside the fireplace. 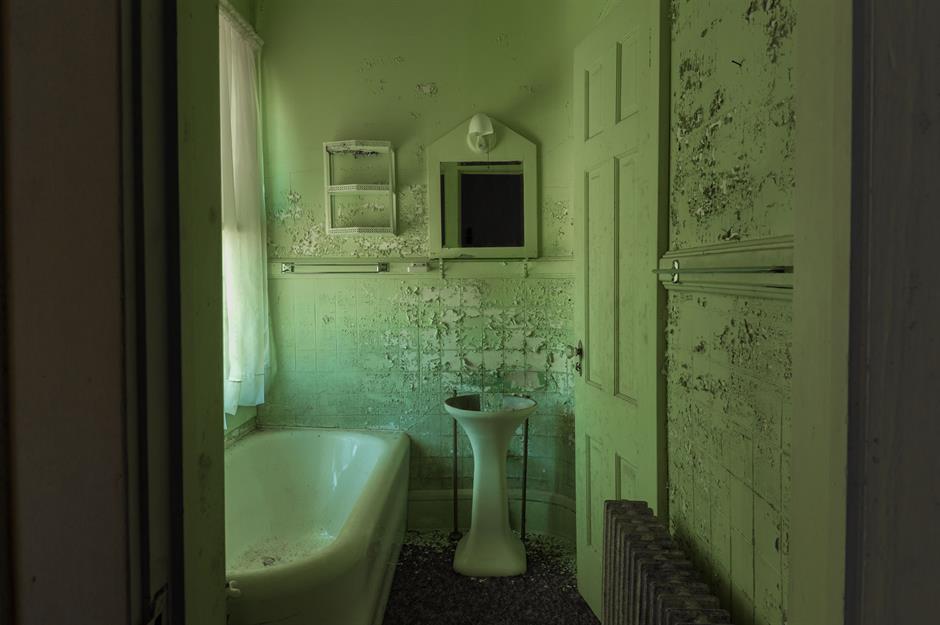 The house is completely unmodernised and as it would have been when it was built in the 1920s. Like many old houses, it has only one small bathroom, which has most definitely seen better days. The bath is still in place but the washbasin has been removed leaving just the stand. 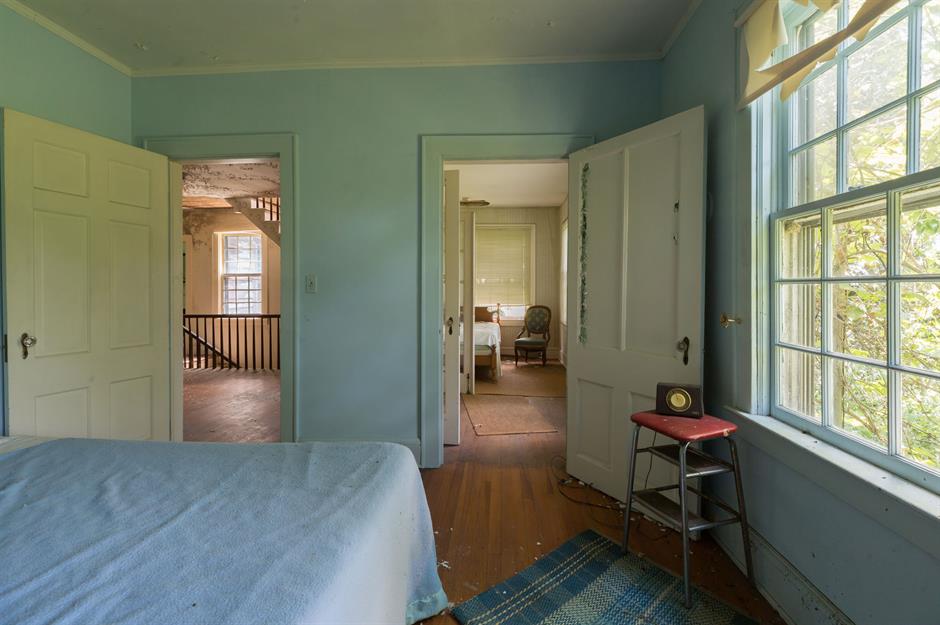 As you can see from this image, the original doors to this bedroom are, like the home's other doors, in perfect condition. Here's hoping the entire house will soon be restored. It needs relatively minimal work and is absolutely crying out to be lived in.

Read next: Tour the abandoned Outlaw House with an FBI connection