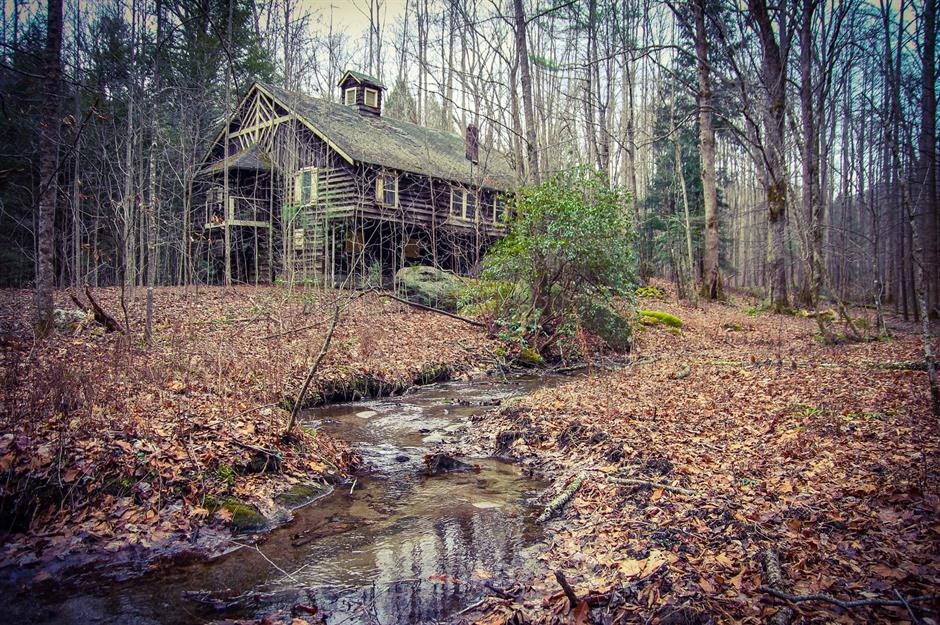 Hidden within the forests of the Great Smoky Mountains lies a forgotten holiday haven once frequented by East Tennessee's wealthiest families. Now reduced to an eerie ghost town, Elkmont bustled with charming log cabins and plush amenities in the late 19th and 20th centuries – the community even boasted a Millionaires' Row. Captured by Leland Kent for Abandoned Southeast, let's take a trip back in time and discover why this luxury destination was so hastily abandoned... 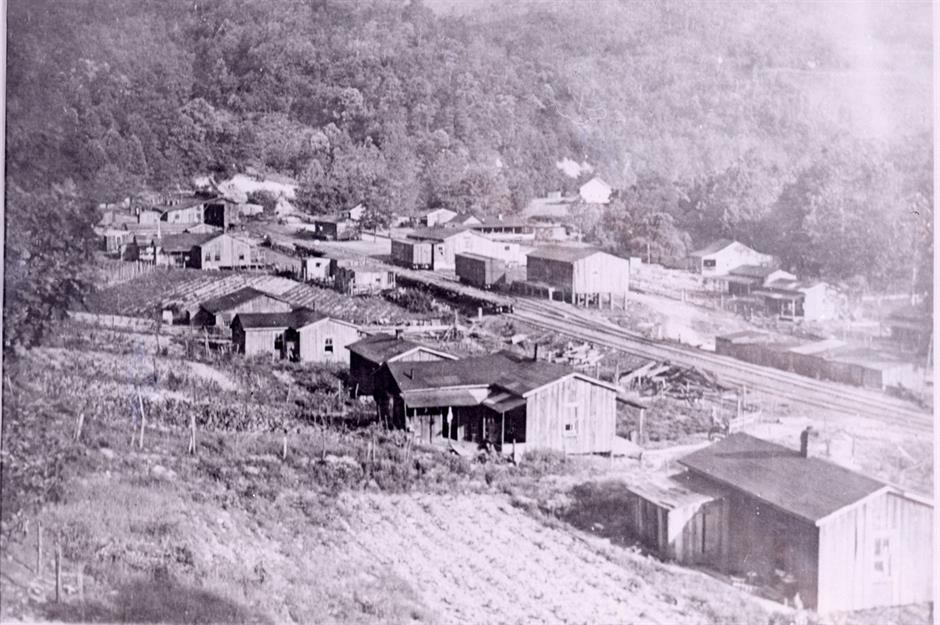 National Park Service
Elkmont was founded in 1908 by the Little River Lumber Company as a logging community, though urban dwellers had begun visiting the area during the late 19th century to escape the stifling heat of Knoxville and other nearby cities in Tennessee. They would travel up to the rural idyll in caravans to while away the dog days of summer in the crisp mountain air.

McClung Historical Collection / National Park Service
However, tourism in Elkmont didn't really take off until 1910, when the Little River Lumber Company started selling plots of land to members of Knoxville's elite. The previous year, the firm had established a daily railroad service connecting the city with the picturesque mountain town. Day-trippers and vacationers would ride in open observation cars to make the most of the breathtaking views. 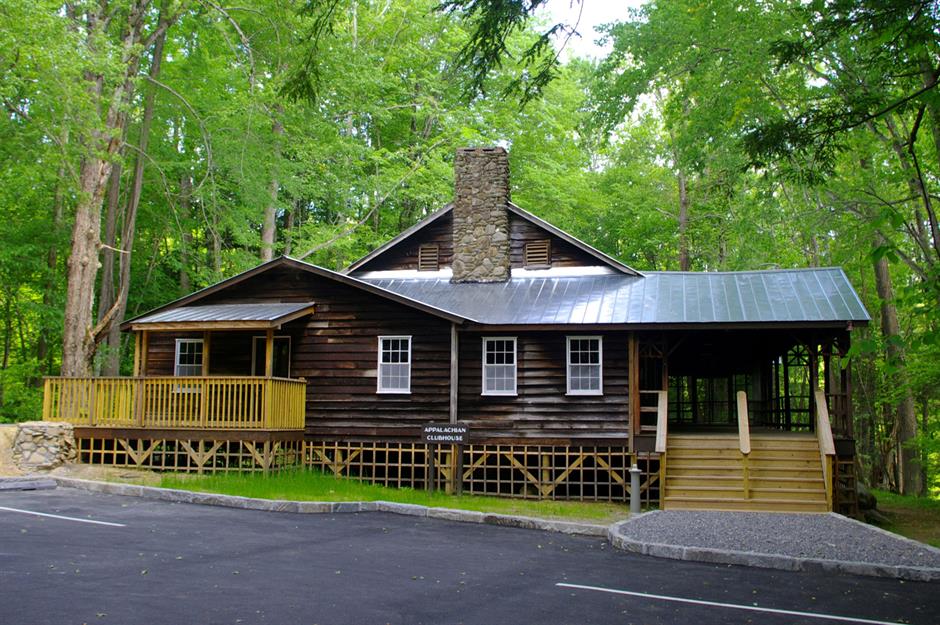 Knoxville's wealthiest residents flocked to the town, buying up land and erecting luxury summer cabins. In 1910 they created the private Appalachian Club and built a large clubhouse. The 3,000-square-foot structure was used as a gathering place for members and their guests, and hosted many a glittering event.

The Wonderland Hotel, a swish 50-room resort lodge, was constructed in 1912 and bought in 1919 by a group of Knoxville businessmen, who formed the exclusive Wonderland Club. Grander than the Appalachian Clubhouse, the two-storey hotel was located just above the Little River Railroad station.

As you can see from this amazing historic photo of the Wonderland Hotel lobby captured in 1938, the lodge, like the other buildings in Elkmont, was decked out in rustic decor and featured large stone and brick fireplaces, hardwood flooring and clapboard walls. The rooms were filled with country-style furniture, including homely rocking chairs and wooden sofas.

Library of Congress [Public domain]
Stone steps led from the station to the hotel and the staircase became a popular spot for visitors to pose for photos. Rocks from the Little River were cemented at the top of the steps, spelling out ‘Wonderland’. The steps can still be seen today but thanks to dense overgrowth and weeds, they're pretty hard to discern.

Vacationers and their guests also congregated around the stone fountain in front of the hotel, as shown in this photo taken some time in the 1920s or 1930s. While the fountain has survived to the present day, it's losing the fight with Mother Nature so you'll need to be eagle-eyed to spot it.

Sadly, this is all that remains of the upscale Wonderland Hotel. The building collapsed in 2005 and what was left burned to the ground in 2017 in a suspected arson attack. Several cabins were also set alight. The Appalachian Clubhouse actually succumbed to fire in 1934 but was rebuilt that same year and has since been restored for posterity. 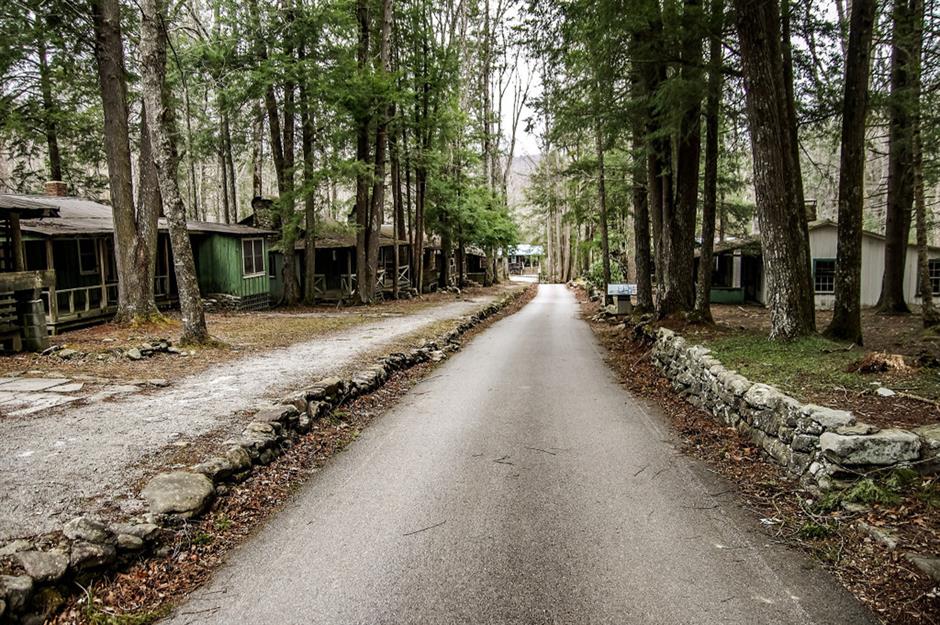 During the 1920s and 1930s, the resort town's heyday, Elkmont was the premier summer destination for the upper echelons of Knoxville society. On the now abandoned streets, dozens of cabins were built lining the road to the Appalachian Clubhouse. This section of Elkmont became known as Daisy Town. Other parts of the resort were dubbed Millionaires' Row and Society Hill on account of their lavish log residences. 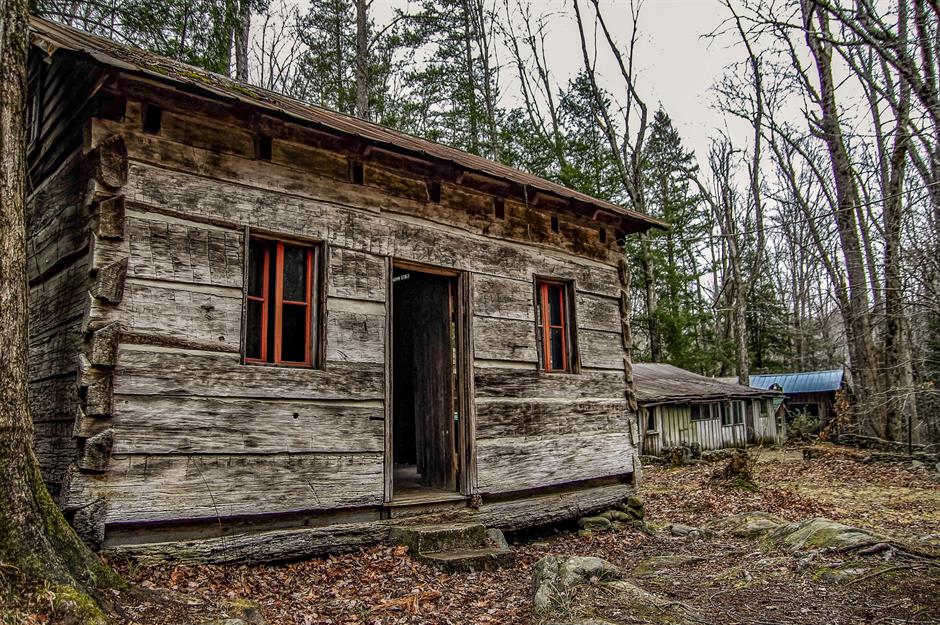 Abandoned Southeast
The Levi Trentham cabin is the oldest structure in the town and one of the most venerable surviving homes in the Great Smoky Mountains. The log building was constructed in 1830 and was home to mountaineer Levi Trentham, the so-called 'Prophet of the Smokies', who served as a guide to many of the Elkmont holidaymakers. It was transplanted to Daisy Town following his death in 1932 to serve as a guest cottage.

Abandoned Southeast
The cabin was originally located in the nearby Jake's Creek area. Trentham put his carpentry skills to good use despite his advancing age and helped build a number of log cottages in Elkmont during the 1910s and 1920s. Architectural features of the mountain man's former home such as dovetail corners and exterior stone chimneys were incorporated in many of the structures erected during those decades. 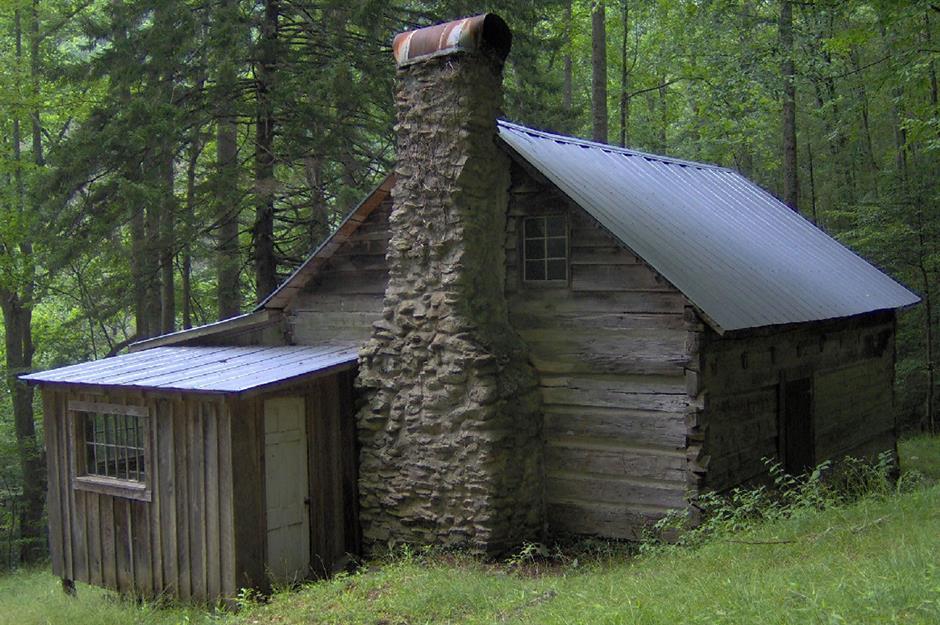 The Avent Cabin is the second-oldest structure in the Elkmont area. Built in 1845, the cottage was acquired in 1918 by Frank Avent and his wife Mayna Treanor Avent, an artist who used the property as a studio and painted some of her most admired works there.

The area nicknamed Society Hill is located on the banks of Jake's Creek. Moneyed Knoxvillians built sprawling vacation cottages overlooking the tranquil river. Unfortunately, many of the abandoned homes here have gone to rack and ruin, with most properties slowly sliding down the mountainside. 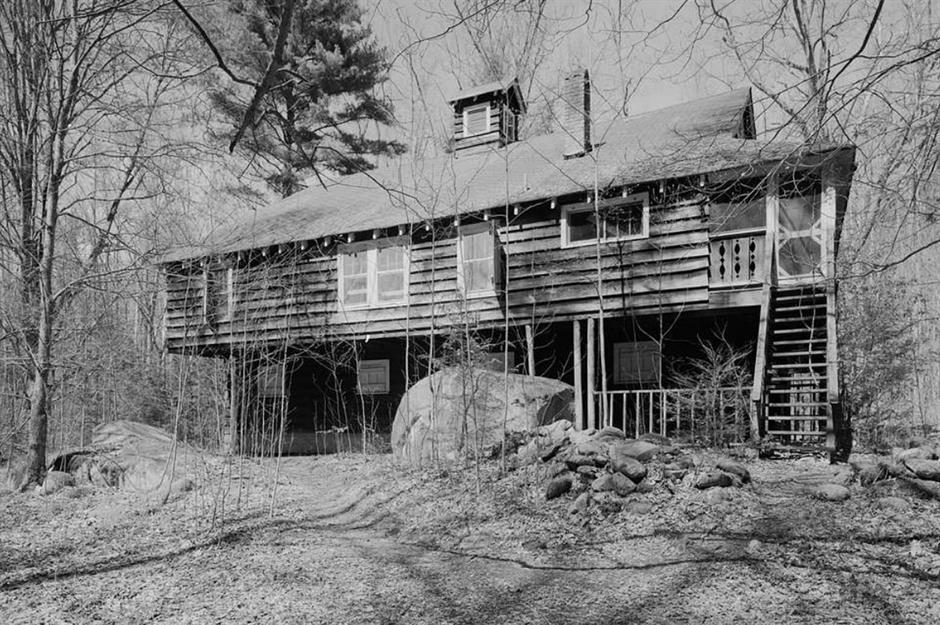 National Park Service
Colonel WB Townsend, the founder of the Little River Lumber Company, oversaw the construction of one of the finest structures in Elkmont, a captivating Swiss-style chalet called Spindle Top. The colonel spent many summers in the chalet with his wife Alice. The cabin, which is also known as the Miller Cabin, was thereafter leased to newspaper editor Loye Miller. 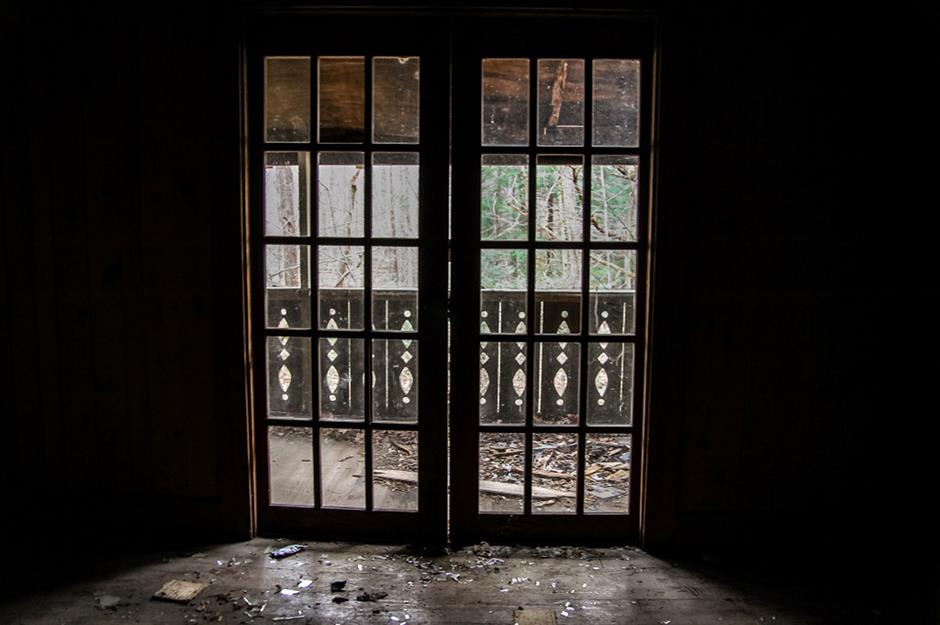 These days the chalet is in a sorry state of disrepair if this photo is anything to go by. In a tale of riches to ruins, debris litters the floors and windowpanes are missing from the French doors that lead out onto the porch. Still, the structure itself appears fairly robust, unlike the rickety cottages of Society Hill that line the river. 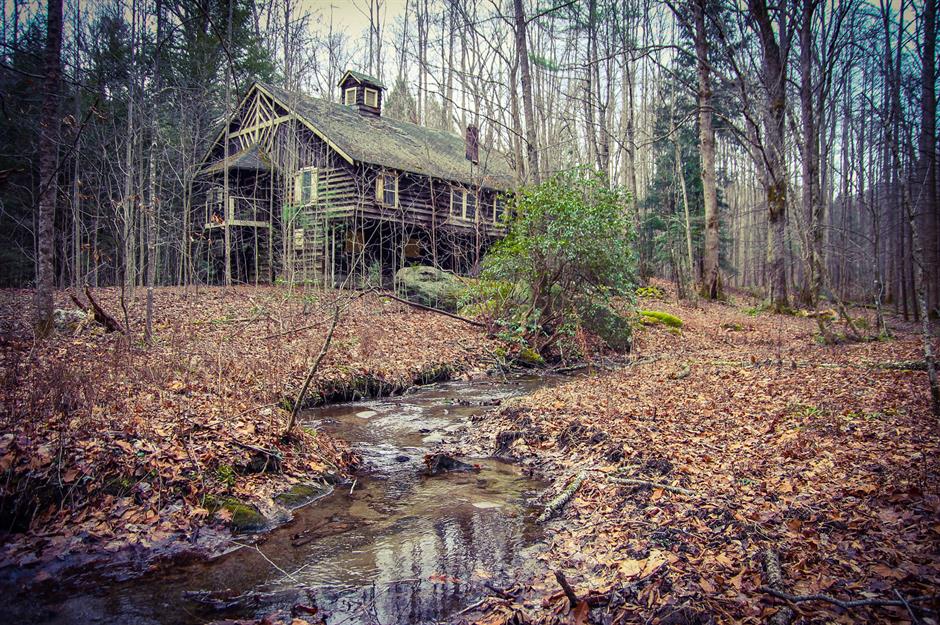 Abandoned Southeast
Colonel WB Townsend and his wife Alice also rented out several deluxe surrounding cottages, including Faust Cabin and Cambier Cabin. Along with Society Hill, this part of town, known as Millionaires' Row, was the most sought-after in Elkmont. 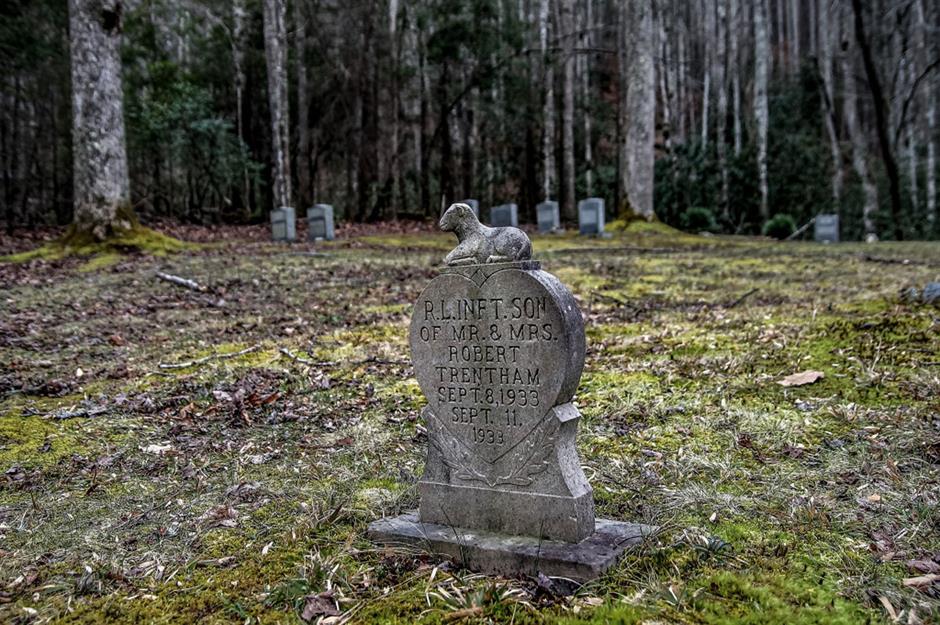 Abandoned Southeast
Elkmont also had less affluent areas, home to modest residences for those involved in the logging industry, as well as humble vacation cottages that were owned or rented by Knoxville's less well-off residents. The town also boasted a church, a general store, a post office, a theatre and even a graveyard. 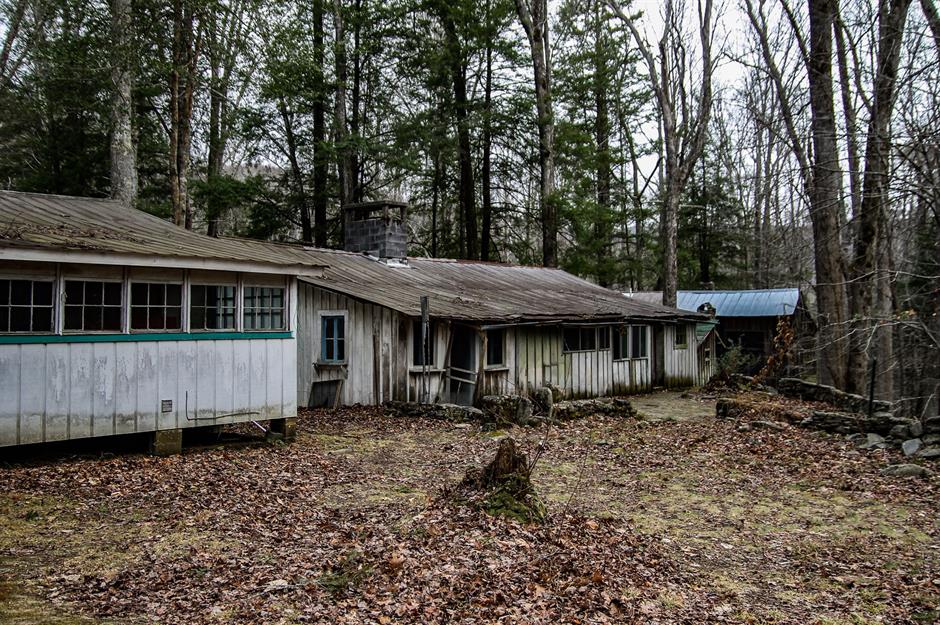 Ironically, efforts to preserve Elkmont and the surrounding wilderness led to its demise. Things started to unravel for the town in 1920, when cottage owner William P Davis, who was inspired by Yellowstone National Park, teamed up with fellow Elkmont landowner David C Chapman to campaign for the creation of a national park in the Great Smoky Mountains. 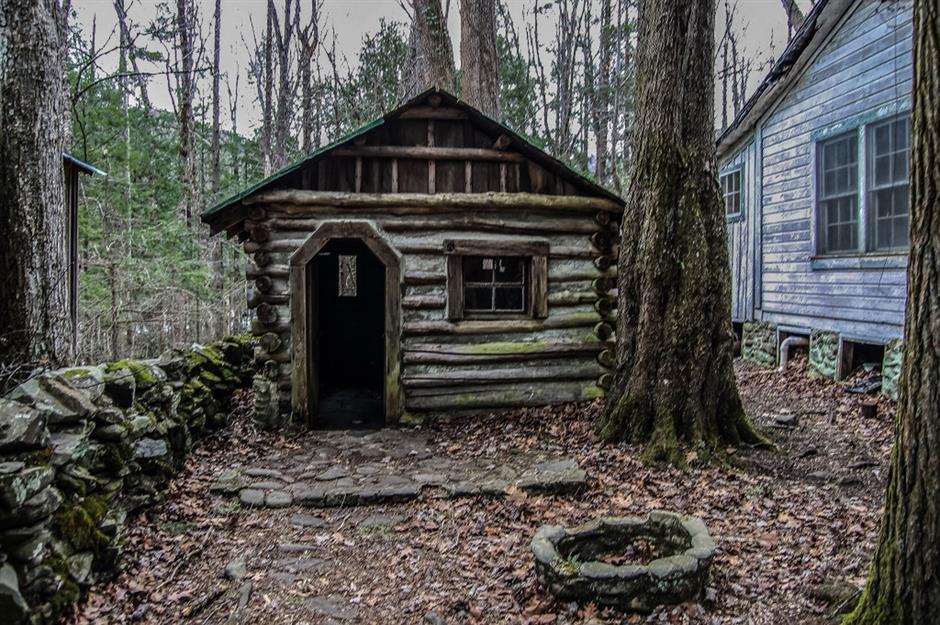 Abandoned Southeast
The duo successfully persuaded state legislators to grant the area national park status and in 1925 the Little River Lumber Company sold 76,000 acres of land to the State of Tennessee. A slew of long-term residents around Elkwood were given their marching orders, but property owners in Elkmont itself were afforded the option of selling their cabins for half price in exchange for lifetime leases.

A turn for the worse 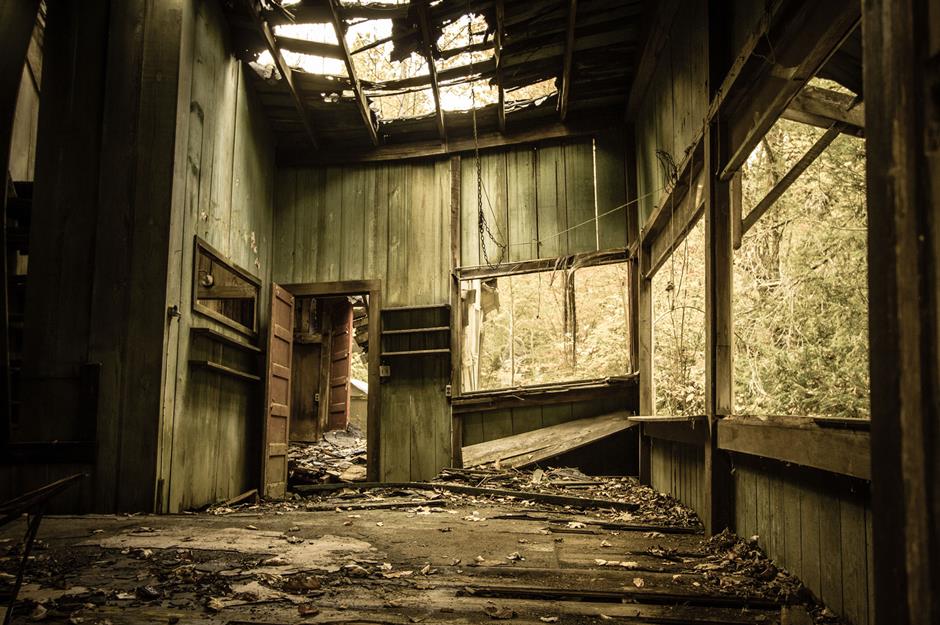 The lifetime leases were converted to 20-year leases in 1952 and renewed again in 1972. But luck was running out for the leaseholders and in 1992 the National Park Service refused to renew the contracts. The decision was influenced by environmental organisation the Sierra Club, which argued that private land ownership shouldn't be permitted within national parks. The landowners were effectively kicked out and the cabins and other structures were abandoned. 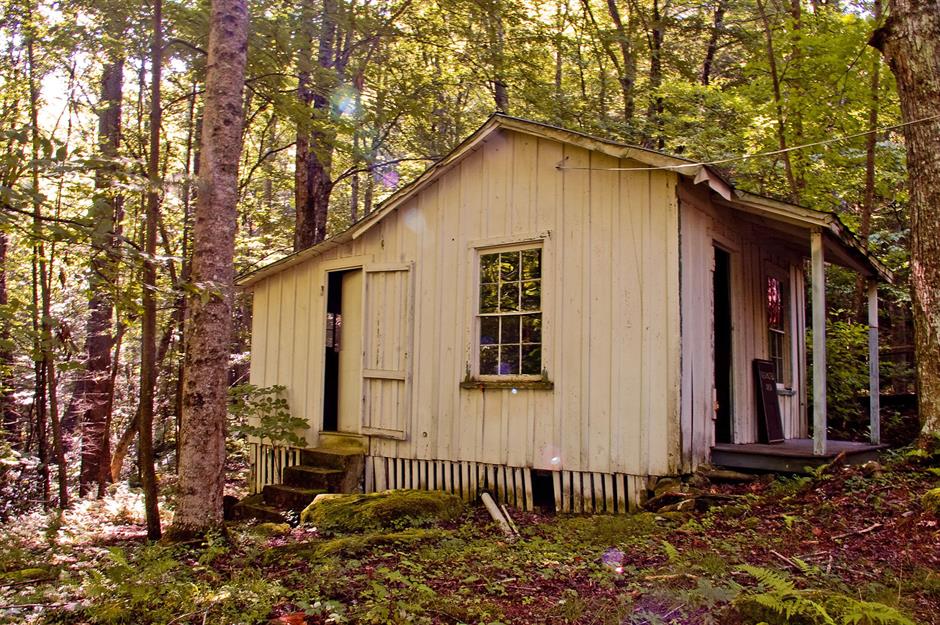 A plan devised in the 1980s called for the demolition of all structures in Elkmont to return the area to nature, but this was thwarted in 1994 when the Wonderland Hotel and several other notable structures were placed on the National Register of Historic Places, known as the Elkmont Historic District. 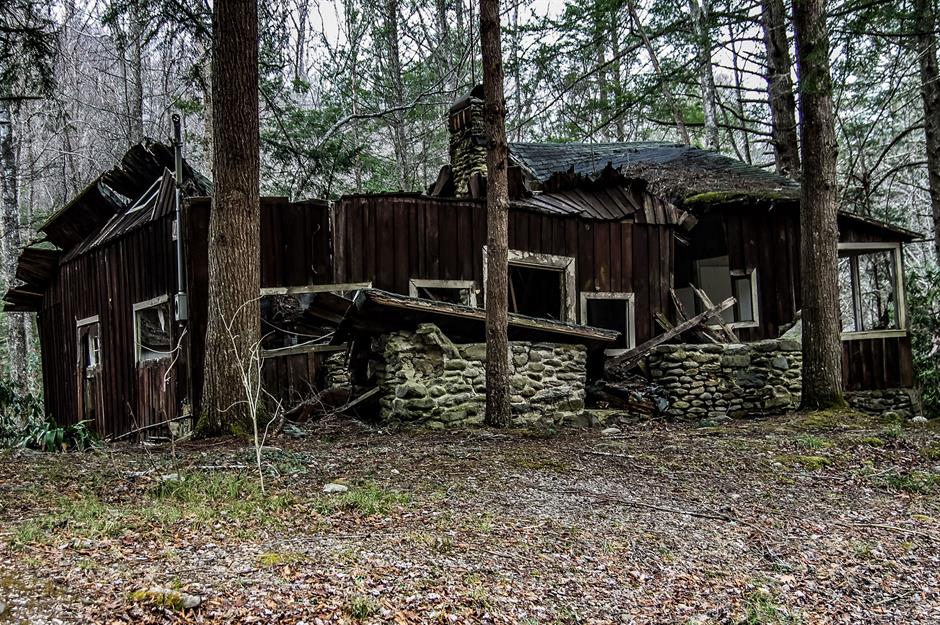 Despite their protected status, little if nothing was done to preserve the endangered historic houses, which became increasingly dilapidated. The powers that be spent years debating the future of the ghost town and, as mentioned earlier, the Wonderland Hotel collapsed in 2005 as a consequence of their inaction.

At long last preservation work got under way in 2009, 15 years after Elkmont's finest structures were declared important historical monuments. The Appalachian Club was the first building in the town to get the renovation treatment and was restored to its former glory that year. 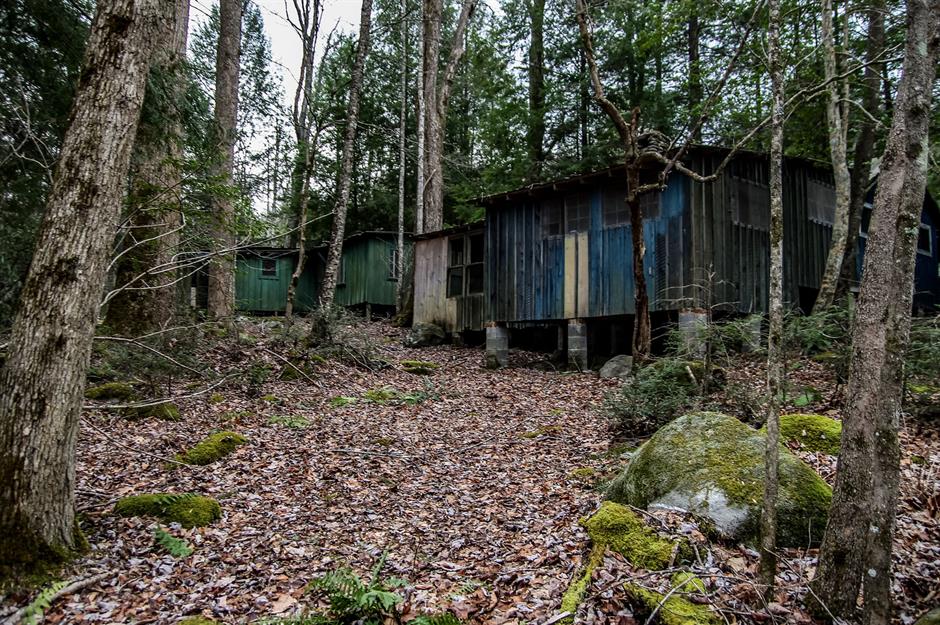 Abandoned Southeast
In 2009, the National Park Service also announced plans to revamp 19 cabins deemed historically significant, leaving 55 of Elkmont's 74 cabins slated for demolition. To date, however, relatively few cabins have been restored, presumably due to lack of funding, and a large number of the structures earmarked for destruction are still standing, but only just. 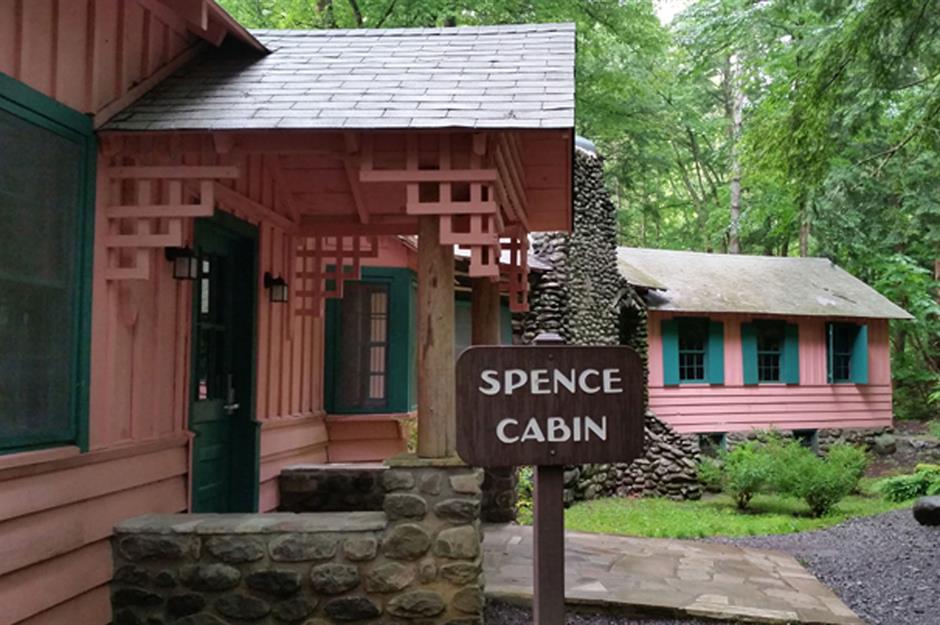 National Park Service
The restored properties include the once-rundown Levi Trentham Cabin, the Avent Cabin (the oldest structures in Elkmont) and the pretty pink Spence Cabin, which can now be hired from the National Park Service for weddings and other events.

Abandoned Southeast
The Creekmore Cabin has also been restored. Built around 1910, the property was, as you might have guessed, owned by the Creekmore clan. In addition to the aforementioned houses, only two other structures have been preserved for future generations: the Mayo Cottage, along with the cabin's servants' quarters.

Relics of a long-past era, many of the other historically important vacation cottages are still waiting to be brought back to life. Visitors can glimpse them from the outside but the interiors of the properties, which are seriously unsafe, are strictly out of bounds. While there's hope on the horizon, the future of the rest of Elkmont still hangs in the balance. Only time will tell if this abandoned ghost town can be brought back to life again.