Discover the grisly secrets of this abandoned Alabama mansion

Take a tour around this creepy old house 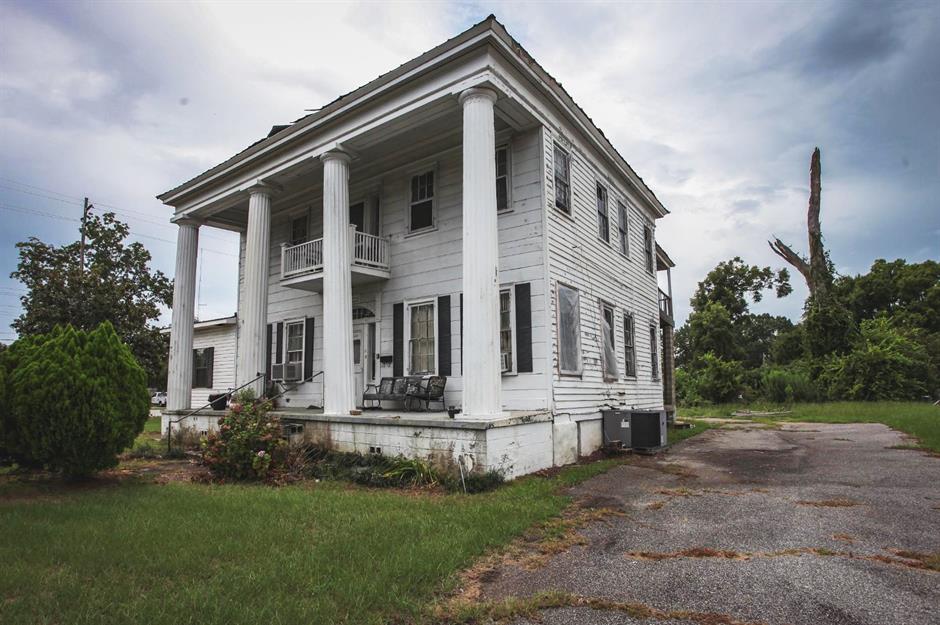 Uncover the tragic story behind the elegant exterior of this abandoned family home. Misfortune and a morbid secret haunt the crumbling walls of this gem of Greek Revival architecture. Listed as a place in peril by the Alabama Trust for Historic Preservation, the once-grand residence looks sadly set to disintegrate into ruin. As Leland Kent of Abandoned Southeast discovered on a recent visit. Step inside this perfectly proportioned remnant of the antebellum Deep South. 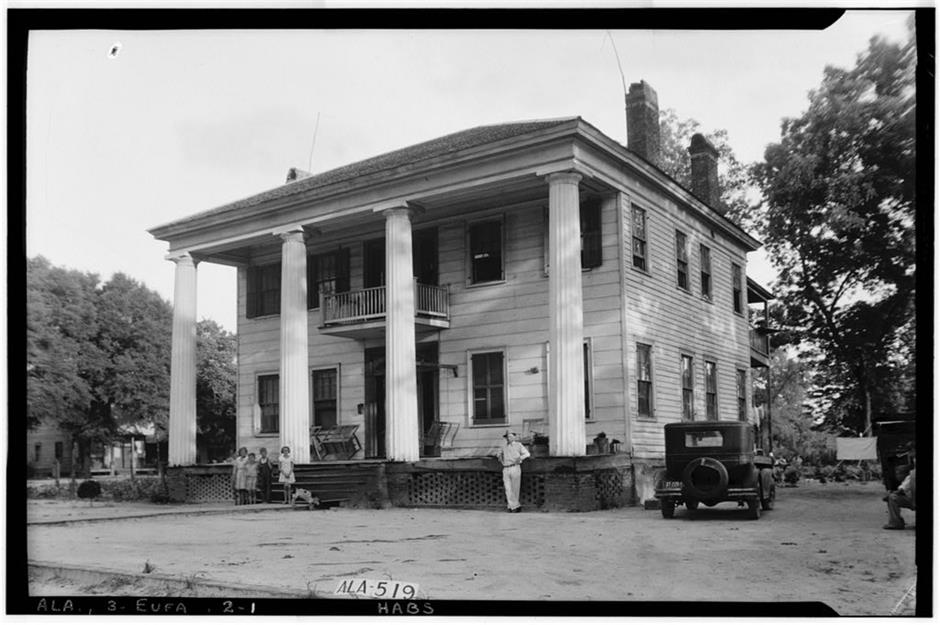 Looking like a grand old building, the house is shown here in a 1935 photo for the Historic American Building Survey. But it was actually constructed almost a century earlier in 1840, making it one of the oldest surviving Greek Revival houses in Alabama. The state was renowned for this style of architecture, during the 19th century. The hallmark of Greek Revival homes is proportion, symmetry and the tall, decorative columns, echoing the shape of ancient Greek temples. 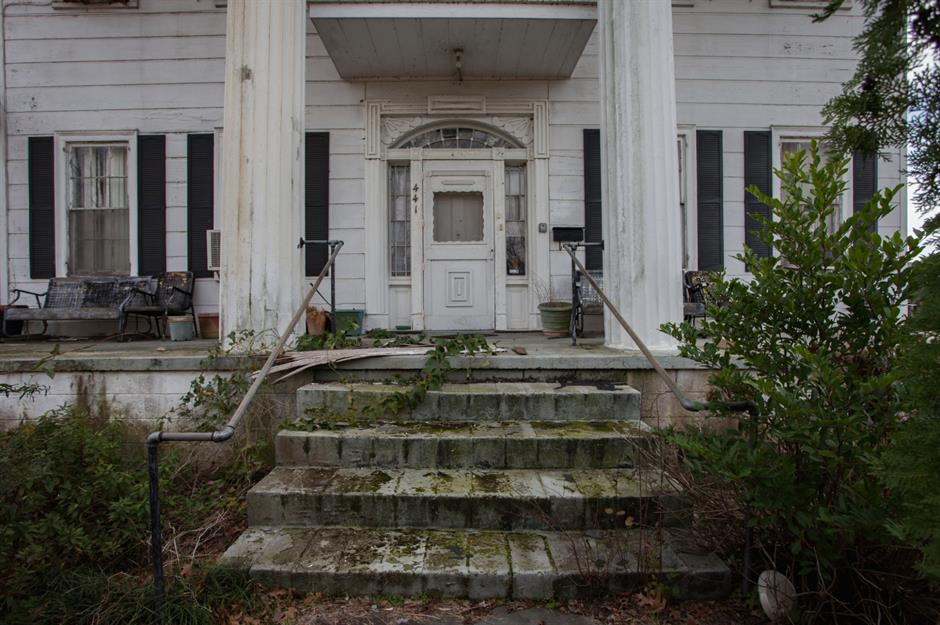 Even in its current sorry state, there’s no mistaking the magnificence this time capsule home. With Grecian-style soaring symmetrical columns, it's still awe-inspiring. Note the linear pattern carved around the top of the door as a decorative border. This motif is called a Greek key. It's said to represent the twisting path of a labyrinth or maze. Like the famous labyrinth of King Minos of Crete, which was inhabited by a terrifying monster called the Minotaur, according to Greek myth. 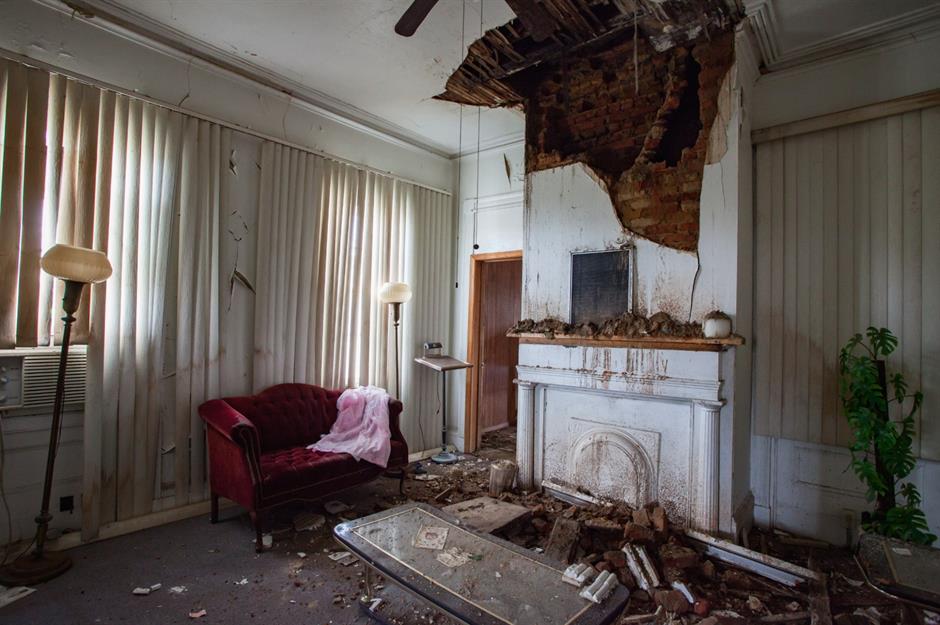 With crumbling brickwork and peeling plaster, this sitting room shows little sign of the home’s former glory. Only the fireplace stands proud, with its miniature Greek columns mirroring the ones on the building’s exterior. The house was built as a fashionable family home for a prominent physician and his wife, about 20 years before the American Civil War. Sadly, the home saw its first sorrow when three of the couple’s eight offspring died as children, probably within the walls of the house. 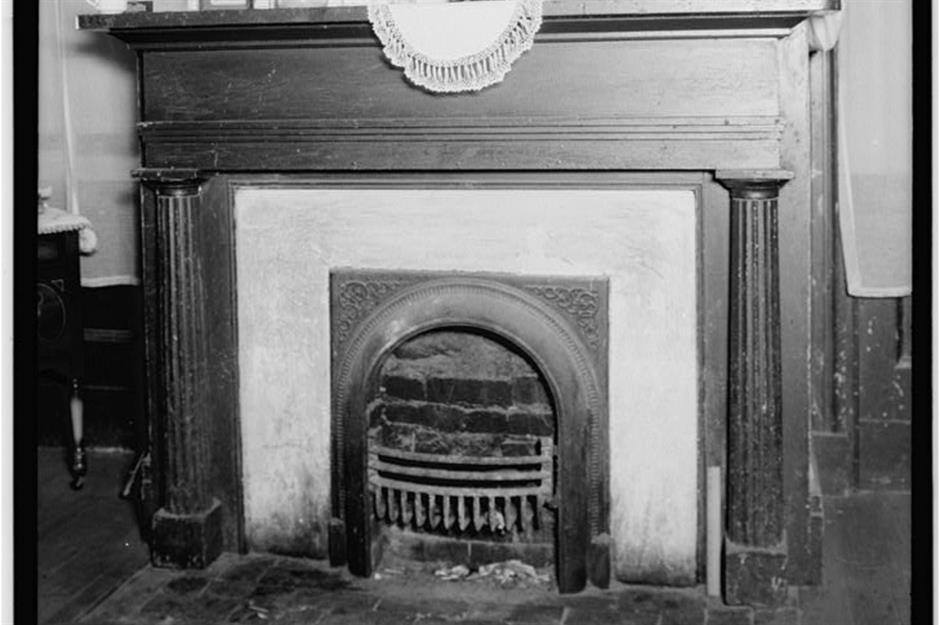 The distinctive columns of Greek Revival architecture symbolise strength, order and power. Shown here on a similar fireplace inside the house, photographed in 1935. The physician’s surviving daughters went on to marry lawyers who eventually became district attorneys and senators. So, power and privilege were no stranger to this family. Yet the daughter whose fate was most entwined with the house was to suffer great loss here.

A wedding and a death 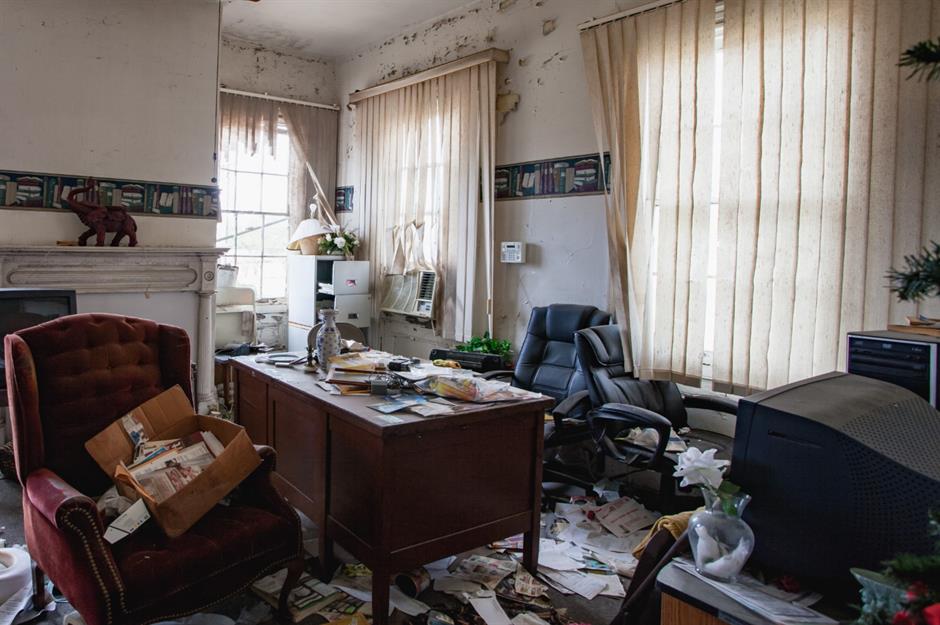 No sense of order remains in this ransacked study. But your eye is drawn to the Greek Revival fireplace, which is the sole sign of the architectural style which defines this home. At the age of 19, the physician’s second eldest daughter married a dashing young doctor. The newlyweds remained in the house with her parents, so the young doctor could train under the elder physician’s guidance. But the partnership was short-lived as her father died just months after the wedding. 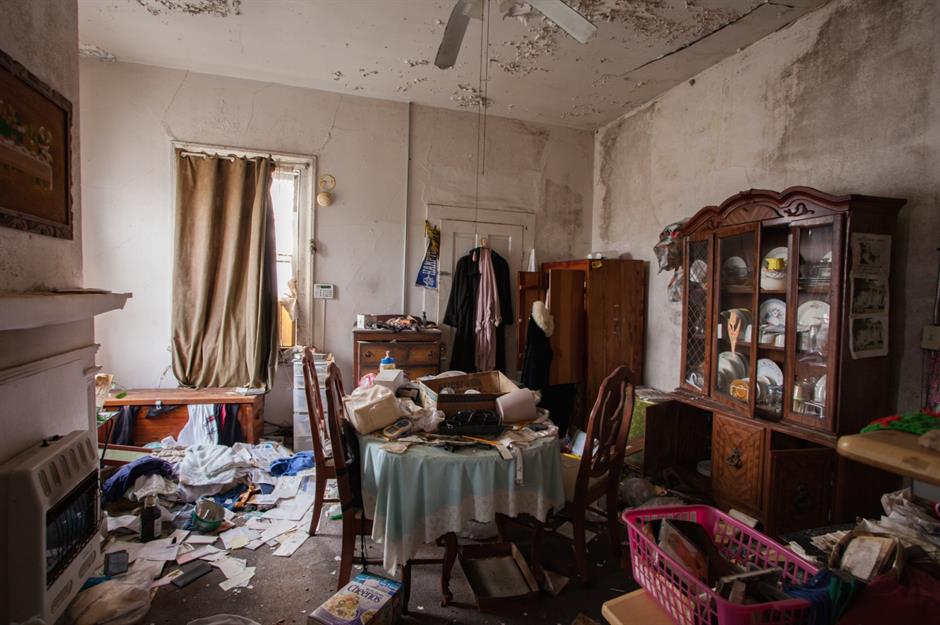 Clothes and crockery remain in this room as if abandoned merely moments ago. The finely carved wooden dresser contrasts eerily with the ruination of the room. An ugly heater obscures the fine lines of the Greek Revival fireplace. Despite the death of her father, the daughter was blissfully in love with her new husband and they lived happily in the house. But the newlyweds joy was soon to turn to tears as their lives changed forever. 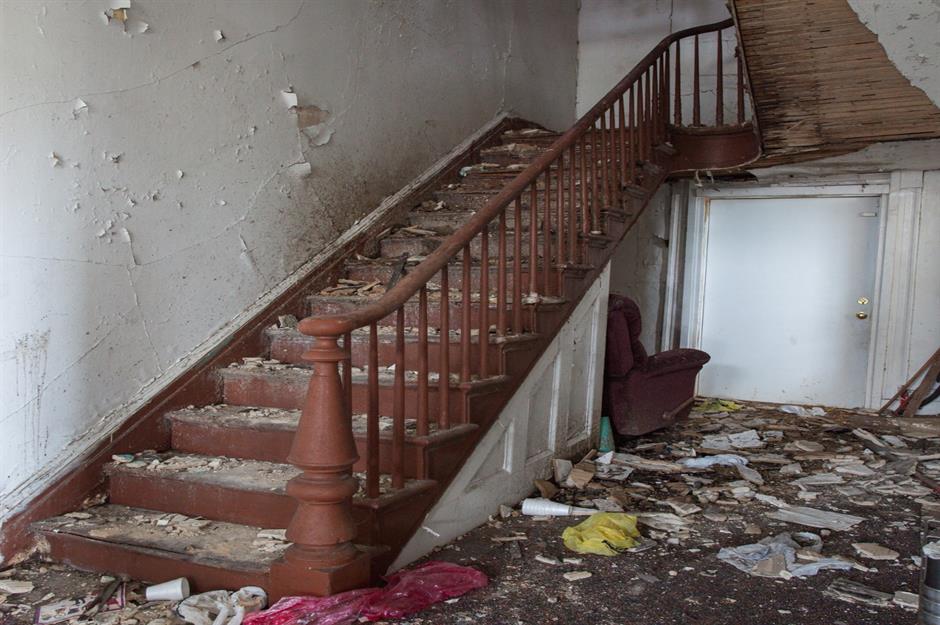 Here, the old staircase is crumbling away in this abandoned American house. Just four years into the marriage, a horrifying accident happened in the home. The young doctor suddenly began sleep-walking at night. He was said to wander around the corridors of the house in a glassy-eyed, dream-like state. One night he walked, while asleep, down the hallway towards the second-floor balcony. His final step tipped him over the railing, smashing his body on the porch below. 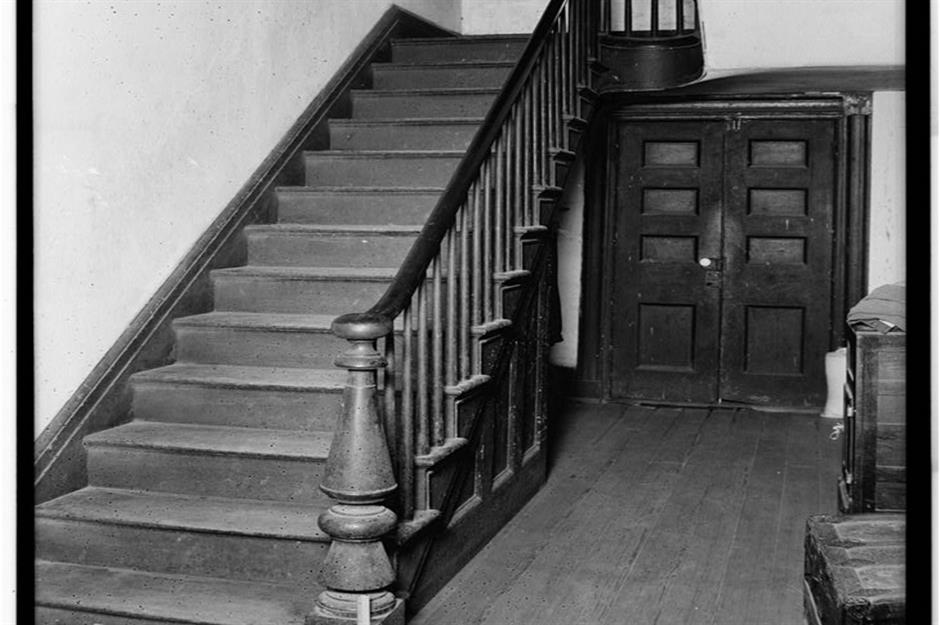 The young doctor crushed part of his spine in the fall. He would never walk again. Paralysed from the waist down, he had to adapt to life in a wheel chair. His career as a physician was over. The happy couple’s lives were irrevocably changed. Then, his wife discovered she was pregnant – with the only child they could ever have. This photo shows the staircase in its original state. The rounded carving of its newel post and the balustrades supporting the banister are pleasing to the eye. 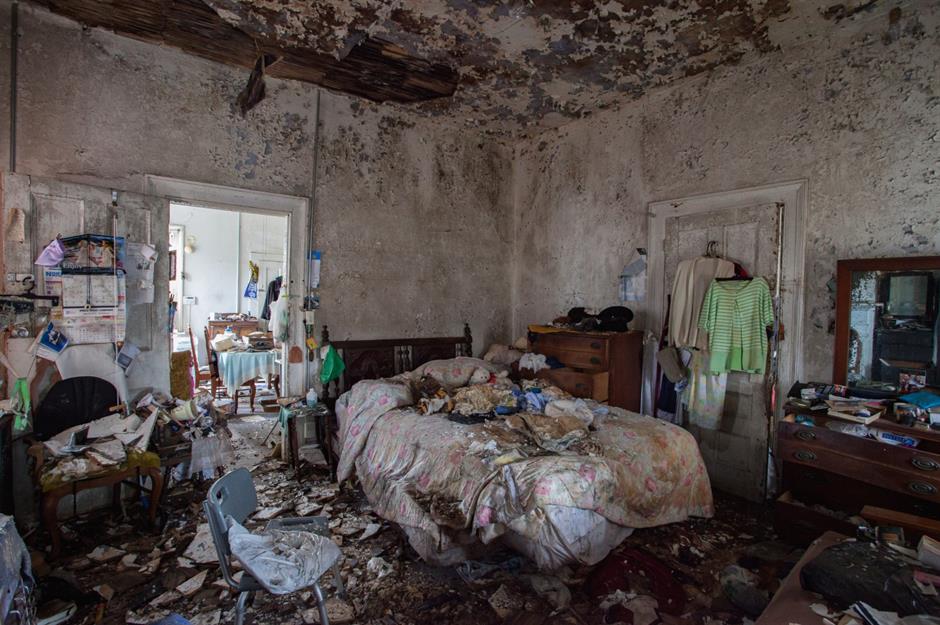 Thankfully, the doctor and his wife had a healthy baby son. But a couple of years after the tragic accident, the family moved away from this home haunted by bad memories. The property was sold to a craftsman who ran a furniture store from the residence. But today, decay springs to mind when you look at how this once-fine bedroom has deteriorated through neglect. Or perhaps it’s a taster of the gruesome secret lurking in the rooms below… 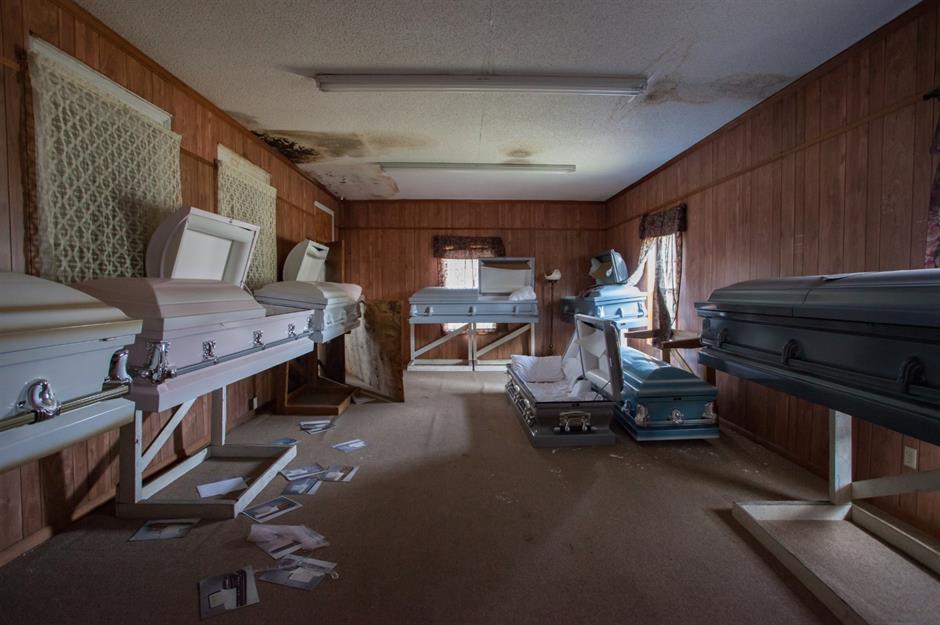 Venturing back downstairs, you might think you’d stumbled upon a colony of vampires! Because this room is full of pristine white coffins with shiny silver handles, glinting in the gloom. Looking very much like the preferred snoozing site of Count Dracula, coffins line each wall. But you’ll be relieved to discover these final resting places are merely the remnants of a family funeral business. No bloodsuckers here. 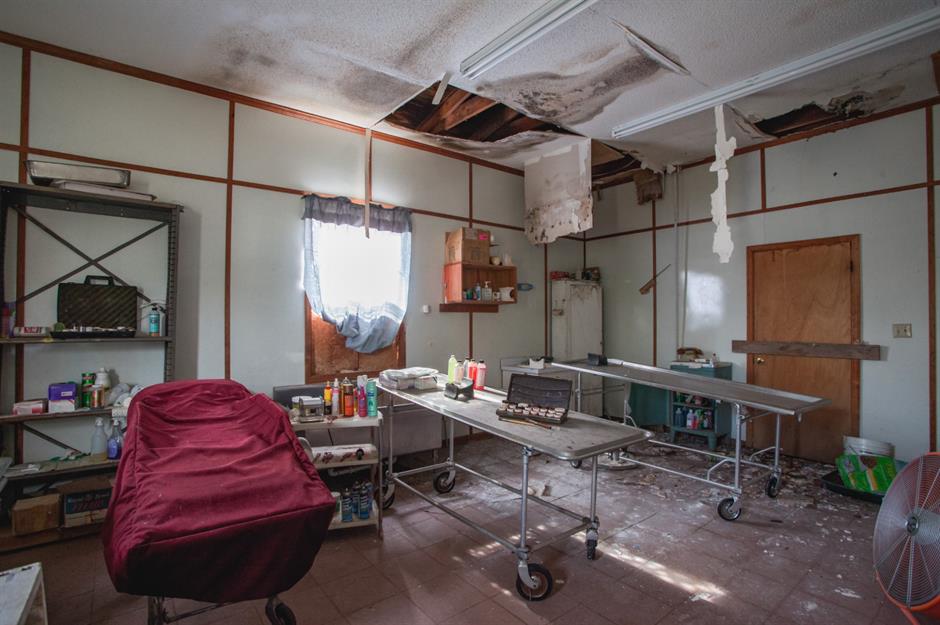 But coffins aren’t the worst of it in this spooky abandoned house. Like something from a horror movie, these metal stretchers were once used to lay out dead bodies. The deceased would then be made to look presentable for grieving loved ones. The undertaker moved into the house in the 1950s. His family lived upstairs, while the business operated downstairs – corpses included! 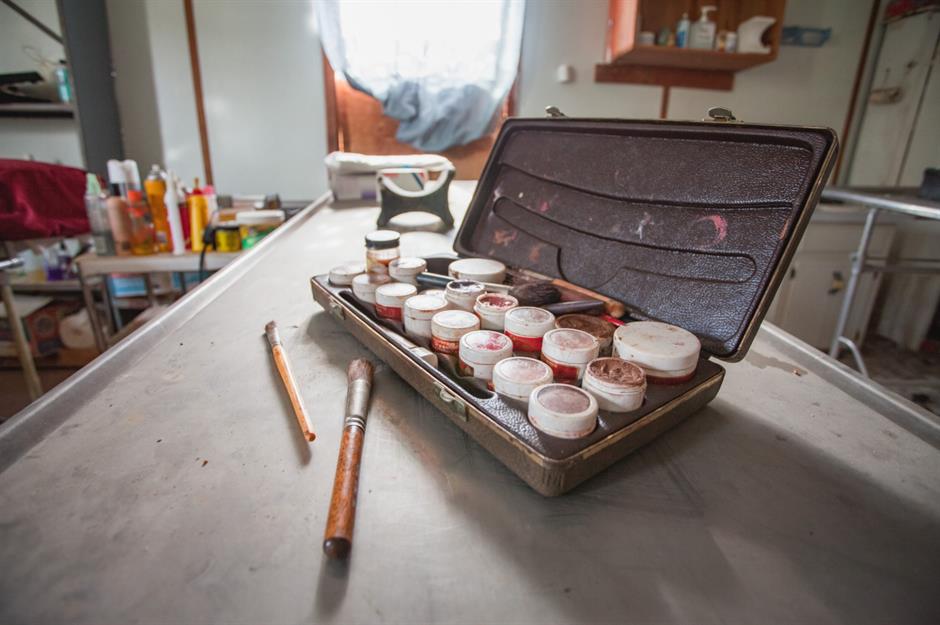 This collection of powders and balms are probably not the kind of cosmetics you’d want adorning your dressing table at home. Decay aside, that’s because this is make-up for the dead. All the tools of the undertaker’s trade are squeezed into this downstairs space. Probably not what the Greek Revival architect had in mind for this room!

End of an era 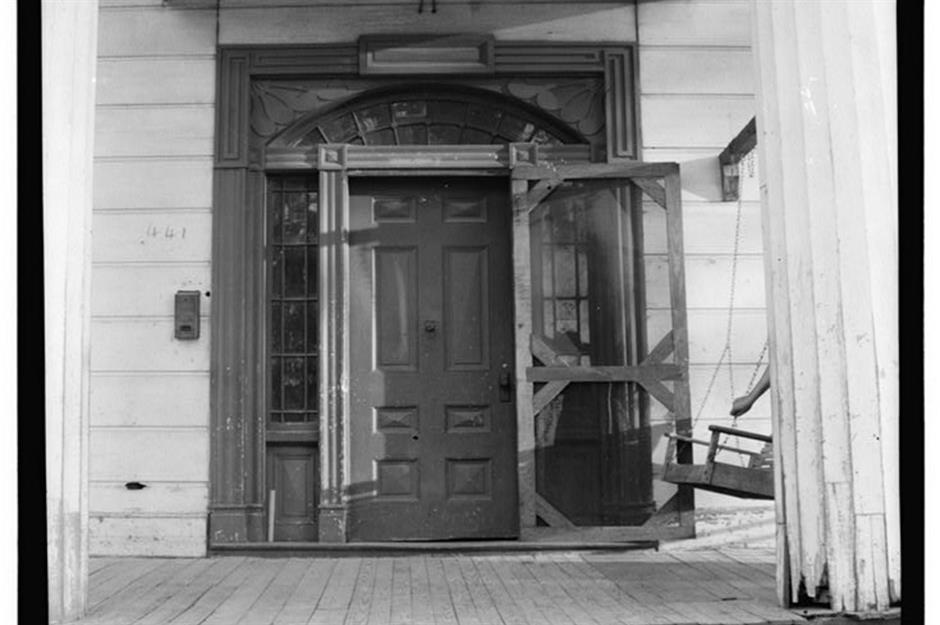 After decades in the death business, the funeral director passed away in 1992. The business closed. However, his wife continued to live there until her demise in 2004. The photo shows the smart entrance way as it would have looked in 1935. This porch is said to be where the young doctor crashed to the ground in his tragic tumble. 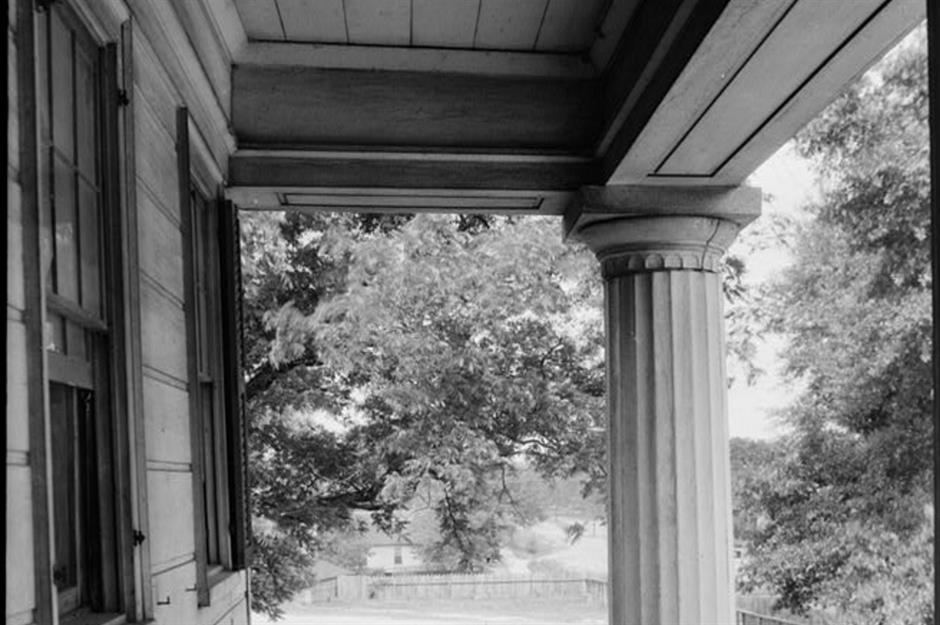 You can get a good glimpse of the Greek Revival columns in this picture. In ancient Greek architecture, columns have three distinct styles: Doric, Ionic and Corinthian. The ones on the house are Doric. This is the simplest style of the three. With a circular, unadorned capital topping the column. The epitome of understated classic style. Doric columns can be seen on the famous Parthenon temple in Athens, Greece. It was constructed in ancient times in honour of Athena, goddess of wisdom. 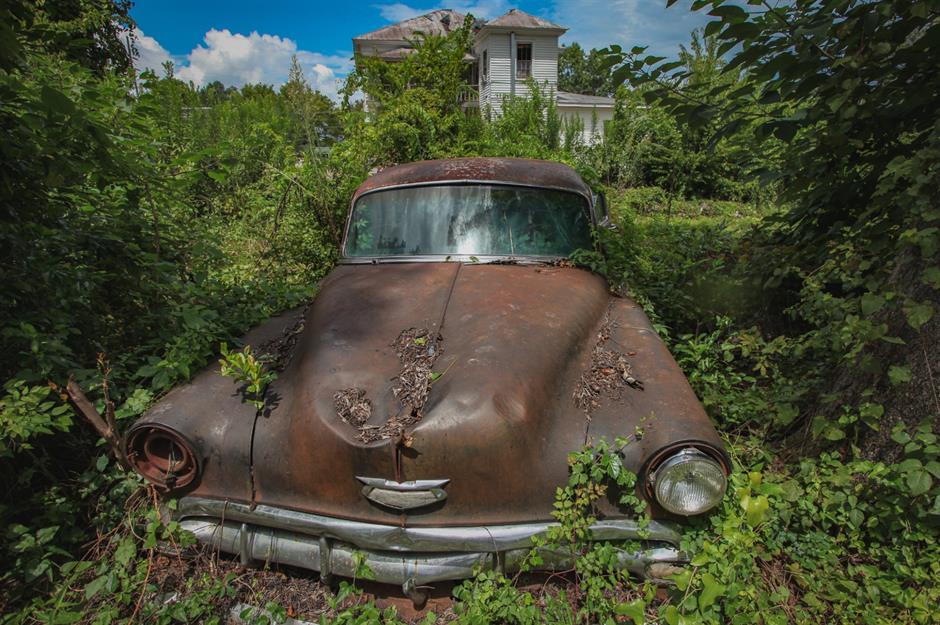 Eventually, this grand old home became an abandoned house. Greenery grew up around the building, seeming to gobble up the exterior space. Outside the house, this rusting, red Chevrolet, which must once have been a prized possession, has almost been swallowed by plant growth. As nature starts to reclaim the land, it’s a haunting reminder of a lost era.

Echo of the past 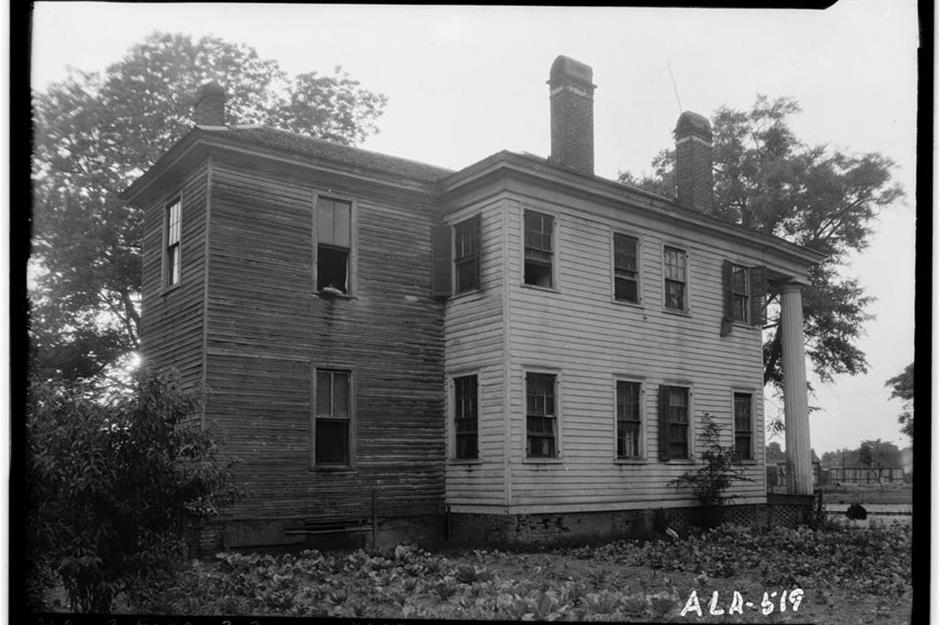 The rear of the home features in this 1935 snapshot. See how the chimneys are all placed as far back as possible. That’s so they’re not visible from the front to spoil the ordered architectural lines of the Greek Revival style. The wood of the house is painted white to mimic the pale stone of ancient Greek temples. Although, archaeologists believe many of these ancient, spiritual buildings were originally painted in dazzling hues of blue and red. But over the centuries, the colours faded away.

A glimmer of hope 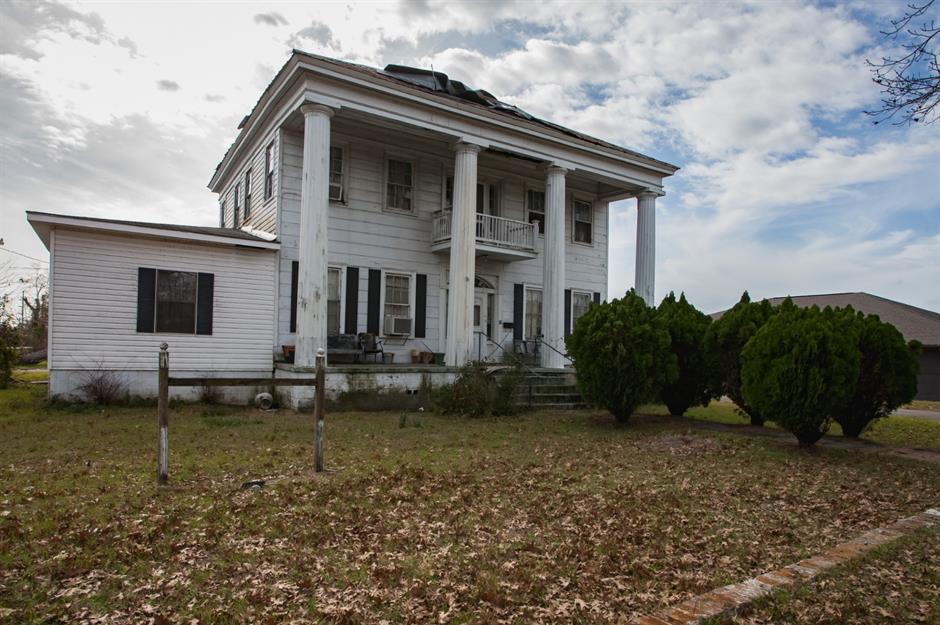 The home was ripped open by two storms. With its roof torn and many windows smashed, it's now exposed to the elements. Authorities have made numerous attempts to contact the out-of-state owner. Sadly, little has been done to fix the destruction, so the residence continues to decay. However, a local preservation group is supporting the effort to restore the house. Let’s hope enough funds can be raised to restore this grand old lady of Greek Revival architecture to her former splendour.