As British film The Guernsey Literary and Potato Peel Pie Society enchants cinema-goers, here are some stunning hideaways on the Channel Island star of the screen

Few people who have read Mary Ann Shaffer’s bestselling novel The Guernsey Literary and Potato Peel Pie Society or indeed seen the new film adaptation featuring a host of British stars will have been able to resist falling in love with Guernsey.

Set in the 1940s shortly after Guernsey’s five-year German occupation ended, it depicts an idyllic location that seems far-removed from its wartime role, all told by the protagonist, writer Juliet Ashton.

Juliet is over-awed by the stunning scenery, writing: “The harbour, with the town traipsing up steeply to the sky, must be one of the most beautiful in the world.”

Today, little has changed, with the harbour still pivotal to everyday life, and Guernsey is rich with natural beauty too – including pristine golden sandy beaches, many of which fans of the book will recognise.

Andrew Carey of Locate Guernsey says, “La Bouvee is not far from St Peter Port’s bustling shops: on a clear day, you can spot the coast of France and a stroll along the cliff path will lead you to Marble Bay, a secluded, rocky cove where you can take in the view across the sea to our sister islands Herm and Sark.”

The island is brimming with charm too and has many unusual properties to choose from, including traditional Guernsey Long Houses and grand manor houses, right up to contemporary apartments.

While properties aren’t the cheapest, UK buyers can benefit from favourable tax benefits, including no VAT, inheritance of Capital Gains Tax, plus on properties over £1.5m there is a tax cap of £50,000 a year for a maximum of four years.

Carey says: “The island of the film has moved on in leaps and bounds, but what remains is a beautiful, safe, unique and accessible island which is firmly open for business. We are quite sure the film will lead more people to discover our little slice of paradise.”

Here are five stunning properties worth splashing out on. 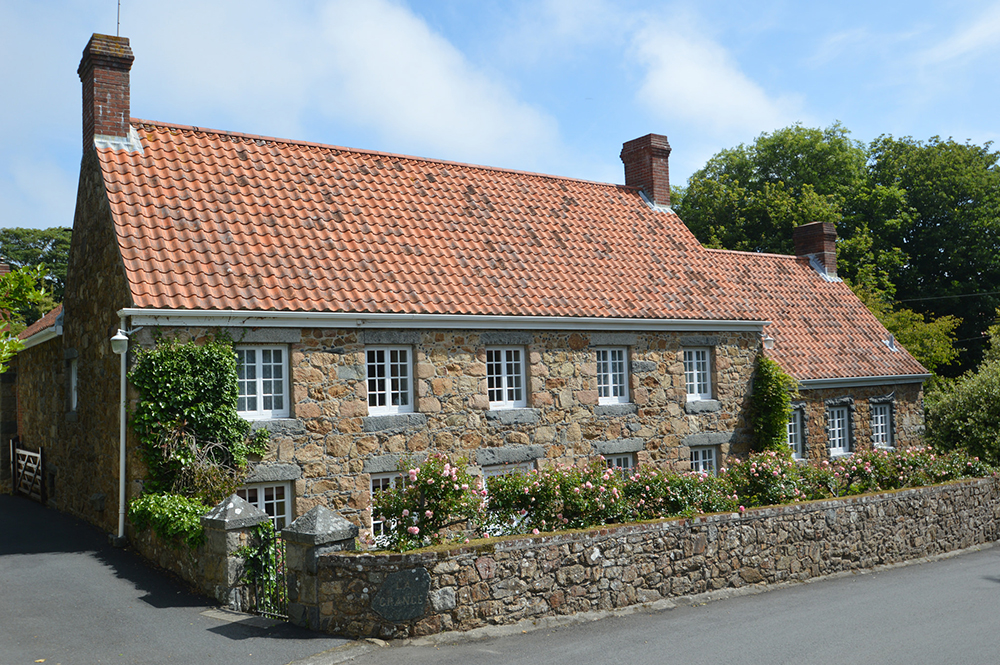 The ‘Big House’ that is central to the novel, is a traditional Guernsey Long House (pictured above), like this four-bed. Built from granite found here on the island, this cottage is situated in a valley near one of the novel’s primary locations of La Bouvee and just a few minutes from one of its loveliest beaches at Fermain Bay. Listed with Lovells estate agents, it comes with an incredible double-height drawing room and mature and well-manicured gardens.

This Georgian manor house on the outskirts of the island’s capital of St Peter Port is the epitome of elegance and offers French-style country living.

Period features abound, including wood-panelling, beams and a triple window in the drawing room overlooking the garden.

It boasts seven bedrooms and a whopping six reception rooms, including its own snooker room, a large glass greenhouse and landscaped gardens. 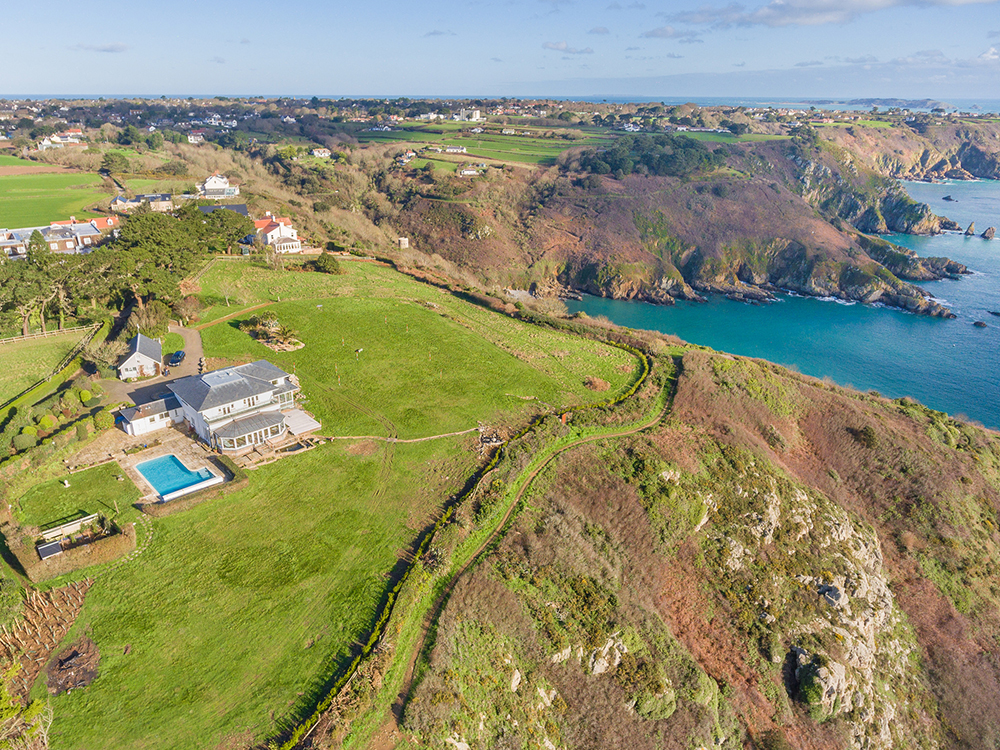 With a name meaning ‘View of Dreams’, this four-bed property (pictured above) is set on a clifftop just around the headland from La Bouvee and offers utter seclusion from its 3.2 acres of grounds, which include an outdoor pool.

Its also located near picturesque Moulin Huet Bay, where French Impressionist painter Pierre-August Renoir was inspired to create 15 artworks during his visit to the island in 1883. 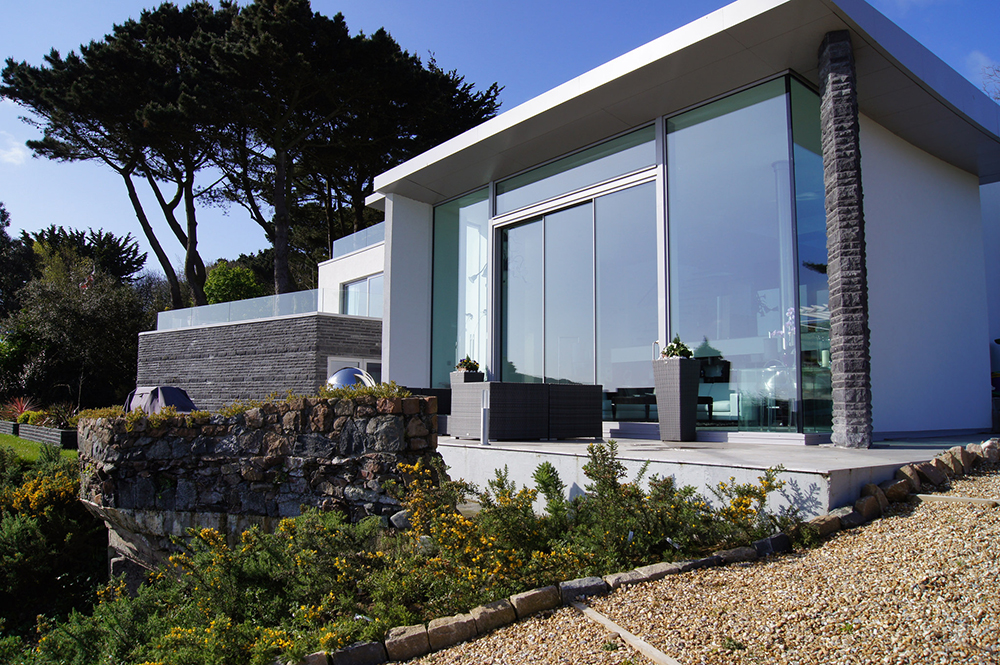 Not all properties on Guernsey are old, as this contemporary mansion attests.

The award-winning four-bed, five-bathroom house overlooks the west coast from its hilltop position – perfect for watching Guernsey’s wonderful sunsets. You may even be able to see some of the island’s famous cows as you settle down for sundowners on your outside terrace.

Perhaps the most unusual of the island’s properties, this former coastal fort, built 160 years ago and offered for sale for the first time, is a west coast landmark.

Nestled between the conservation area of Lihou Island to the west and the beach of Vazon Bay to the east, it offers superb views and complete privacy.

It comes with planning permission to convert to a five-bedroom, six-bathroom private residence. Fixer upper anyone?