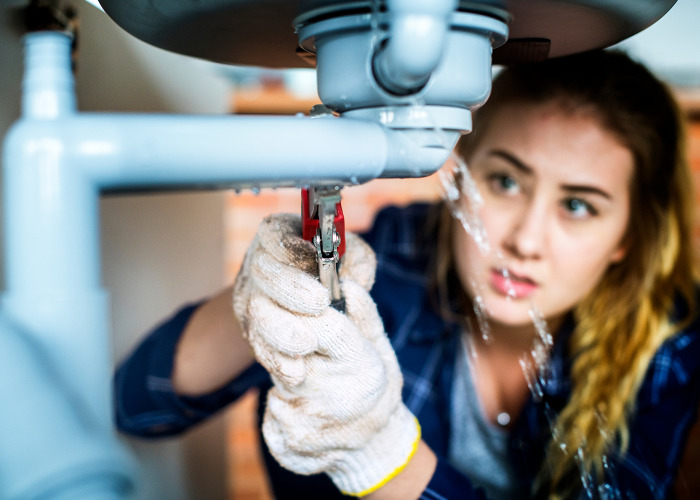 From leaking taps to frozen pipes, plumbing mishaps can wreak havoc on your home. Before you reach for the phone, try our handy toolkit of DIY fixes

There's nothing that strikes dread into a homeowner's heart like a leaking U-bend or a mystery pool of water on the floor.

READ MORE: 33 mistakes to avoid when designing a bathroom

What's more, with swathes of the UK experiencing snow and icy conditions, the plummeting temperatures can wreak havoc on your plumbing, leading to frozen pipes and water heater failures.

Plumbing issues can seem scary, with emergency call-out fees racking up staggering bills, but there are a number of steps you can take to solve the problem before you call in the professionals.

Here's what to do if you encounter one of these common household plumbing problems in your property...

As with any kind of DIY work, the key is to prepare rather than panic, which is easier said than done when faced with unwanted water.

If water is coming into your home from a suspected burst pipe or another mystery source, the first thing you must do is turn off the electricity supply at the fuse box.

Next, you’ll need to turn off the mains water supply. Shut-off valves are usually located in the basement, near the water meter or on an outside wall where the water supply enters your house. 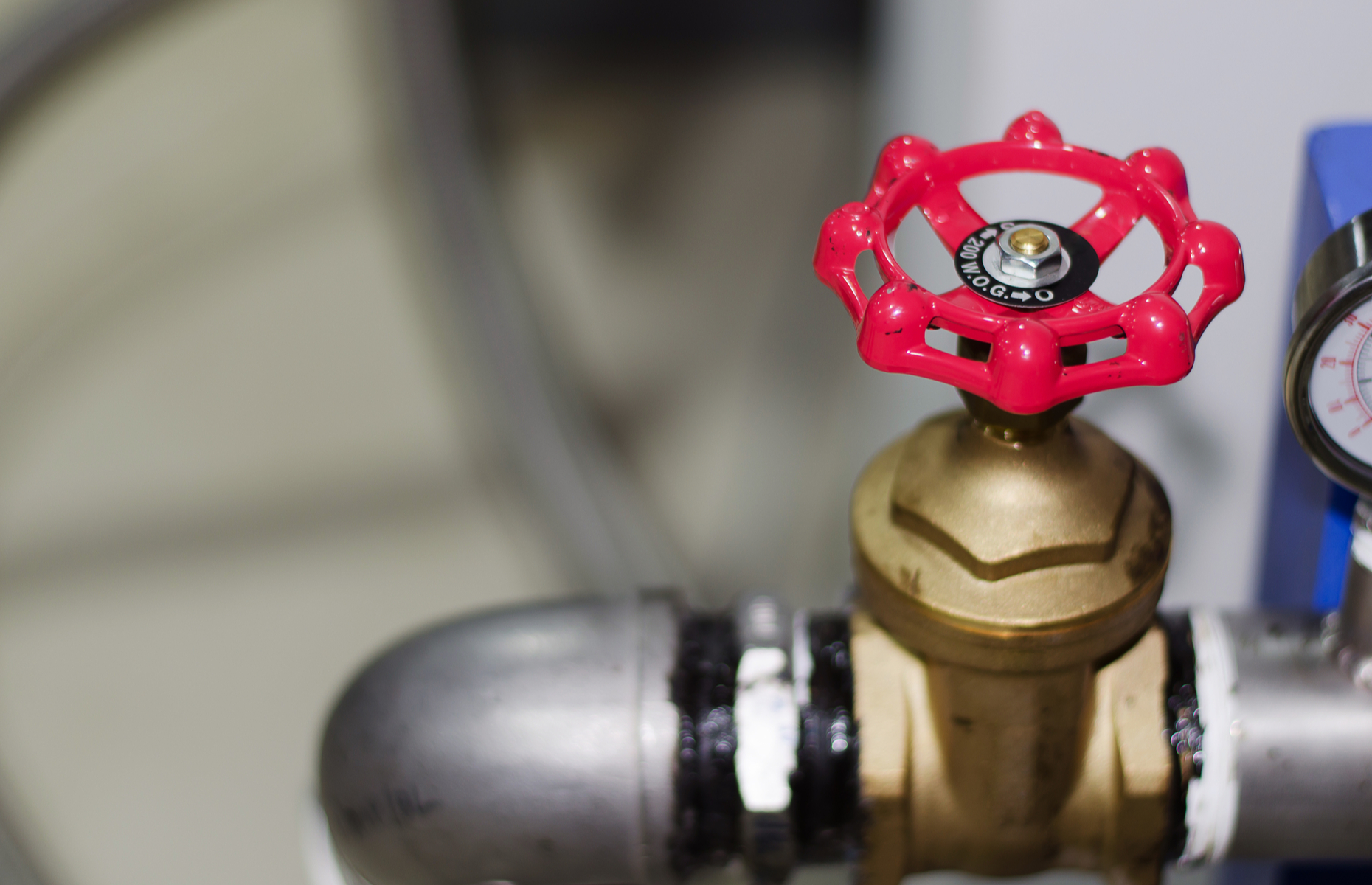 Next, equip yourself with a decent set of tools, which should include a basin wrench, pipe wrench, cranked spanner, pipe repair clamp, plunger and drain rods.

Wear something you don’t mind getting wet or dirty and make sure you have the contact details of an emergency plumber to hand, just in case.

How to fix a blocked drain 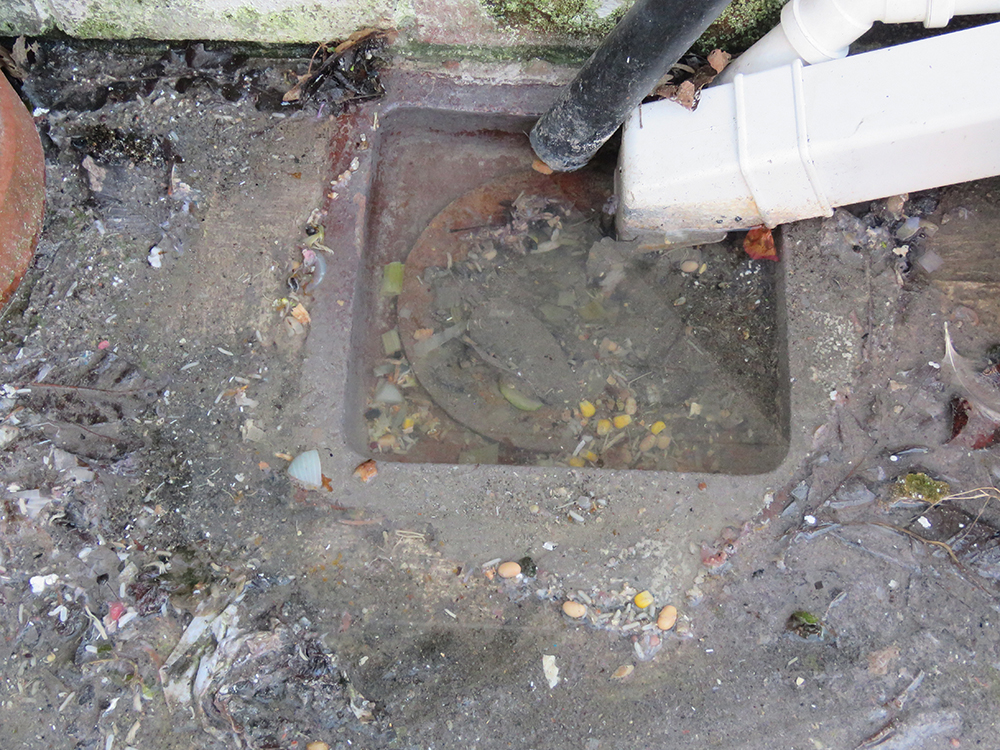 If you're having issues flushing the toilet, your bath just won’t drain or water is coming back up into the sink, you may have a blocked drain on your hands.

In the most straightforward cases, simply cleaning the problem area and removing any obvious obstructions may help, but the issue may well be somewhere you can’t see. Investigate the issue further by lifting manhole covers or probing external drain pipes—also known as gullies.

This might be a dirty job so wear rubber gloves and equip yourself with a drain rod with a plunger at the end to help you dislodge whatever is causing the blockage.

Be sure to turn your rod clockwise as you work—if you turn it anticlockwise, it may unscrew and get caught in the drain, which can lead to another problem you don’t need.

Push against the obstruction before attempting to remove it a little with the plunger. If this doesn’t work, take the plunger off the end of your rod and put a corkscrew attachment on instead to break up the obstruction.

Finish the clearance by directing a hosepipe down the drain to flush any debris out or fill the sink or bath and release the water in one go.

How to fix a frozen pipe

When temperatures tumble in the winter months, an icy spell can result in frozen pipes if they're not insulated properly.

Tell-tale signs of an icy blockage are gurgling noises coming from your central heating, a boiler that won't turn on, no water or a trickle of water coming from your taps and a slow-flushing toilet.

In some cases, this can lead to burst pipework—water expands when it freezes, which can cause pipes to buckle and fracture. However, there are some steps you can take to locate and resolve a frozen pipe, and prevent it from splitting.

For those with modern condensing boilers, the culprit is likely to be the condensate pipe, though you should also check outdoor pipes too, as well as pipes in unheated indoor spaces, such as attics or basements.

Once you've identified the frozen pipe, you can help thaw it out by pouring hot, but never boiling, water over it. You can also place a hot water bottle on the affected section to help melt the ice. As soon as the blockage is cleared, your water and heating systems should return to normal.

To prevent your pipes from icing up in the winter, it's a good idea to insulate them with lagging before the cold weather hits. Servicing your boiler every year will also help prevent cold spots in your heating system that could be susceptible to freezing.

How to fix a leaking pipe

If a pipe has burst, you can use a pipe repair clamp as a temporary solution. The clamp can either be screwed on or simply clamped over the burst area.

Alternatively, you could apply self-fusing repair tape. To do this, remove any grime or dirt from the pipe, cut around 20cm of tape and remove its backing.

Stretch it to around double its length and wrap around the pipe as quickly as possible, making sure you leave the hole in the pipe open initially, wrapping the tape around either side of it first, before finally covering it.

For a long-term solution, you could try burst pipe coupling, provided the damaged section is no longer than 50mm or a push-fit pipe repair kit, which requires no specialist tools.

Failing that, you may need to insert a new section of pipe—a task best left to the professionals if you're a novice.

How to unblock a toilet 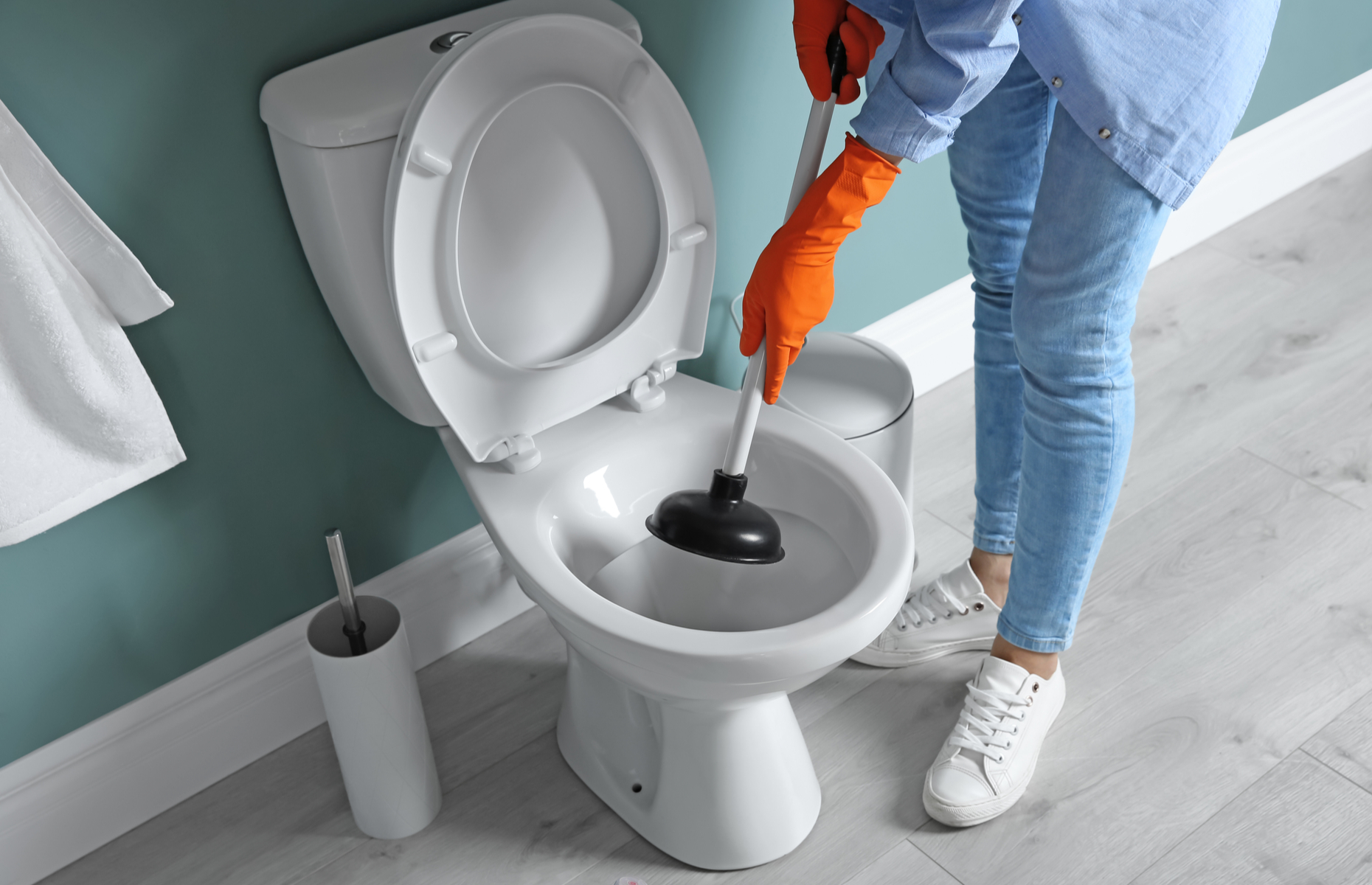 If water is taking a while to drain from the toilet bowl or the water level rises when you flush, you know you've got a blockage.

While this is the one job we’d all rather not have to sort out, once you know how, it's much easier to remedy than you might think. Arm yourself with a few essentials: rubber gloves, a plunger, bleach or drain unblocker and old newspaper to place around the toilet for any mess.

Next, you need to locate the blockage and remove it. This could be as simple as reaching in with your rubber gloves and removing something that may have fallen in, or getting the plunger out.

It's a good idea to run the plunger under hot water first to soften it up and then place it over the outlet in the bowl so water can't pass. If you don't have a plunger, you can use a wire coat hanger instead. Unwind it, push it into the toilet and, hopefully, you can break up the obstruction. Don't attempt this if you have a flexible flush pipe as you could seriously damage it.

Specialist drain rods can be used to dislodge blockages in pipes, but if you still have no luck, it might be time to call in a drainage company.

How to stop a dripping tap 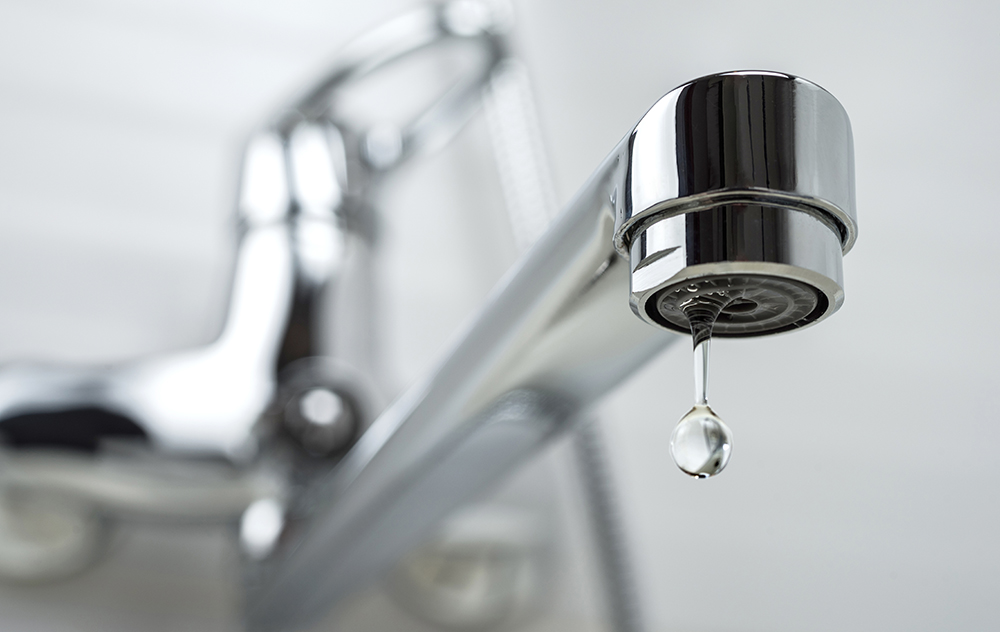 Excruciating on the ear as well as your water bill, dripping taps can cause erosion in baths and sinks, and even lead to damp—according to home insurer Axa, dripping taps lead to insurance claims totalling £387 million each year.

How to fix your tap depends on whether it uses washers or ceramic discs. Not sure? Give your tap a turn, if it only turns a quarter or a half, it’s probably got a ceramic fitting inside, while if it turns further, you're most likely dealing with washers.

Once you have a replacement washer or ceramic disc, you’ll need to take the taps apart. Before you do so, put the plug in the sink to prevent screws or other parts from falling down the sink.

You'll need to loosen the screws to replace the worn parts—they're usually hidden underneath the decorative hot and cold caps on top of the tap, or under the hot and cold indicator on single-lever taps, and you'll need to lift off the tap head too. With the tap disassembled, loosen the valve with a spanner and replace the washer or ceramic disc and then put it all back together.

If after all that there’s still a leak, check the O-ring seal for signs of wear and tear as this may need replacing.

How to improve low water pressure

When you experience sudden low water pressure, you should check whether there have been any incidents in your area or if any of your neighbours are having problems. If not, you know it has something to do with the plumbing inside your home.

Sometimes it can be as straightforward as making sure the shut-off valves near the water meter are fully open, but you might want to check for frozen pipes or blocked drains too.

If the problem is ongoing you can ask your water supplier to do a water pressure test. If you don't want to contact the water board, a pressure gauge from a DIY shop will let you check it yourself—as a measure, an average residential reading is between 30 to 60 psi.

If it’s simply a case of the way the plumbing in your home is designed, you could consider getting a water pressure booster system.

How to fix a running toilet 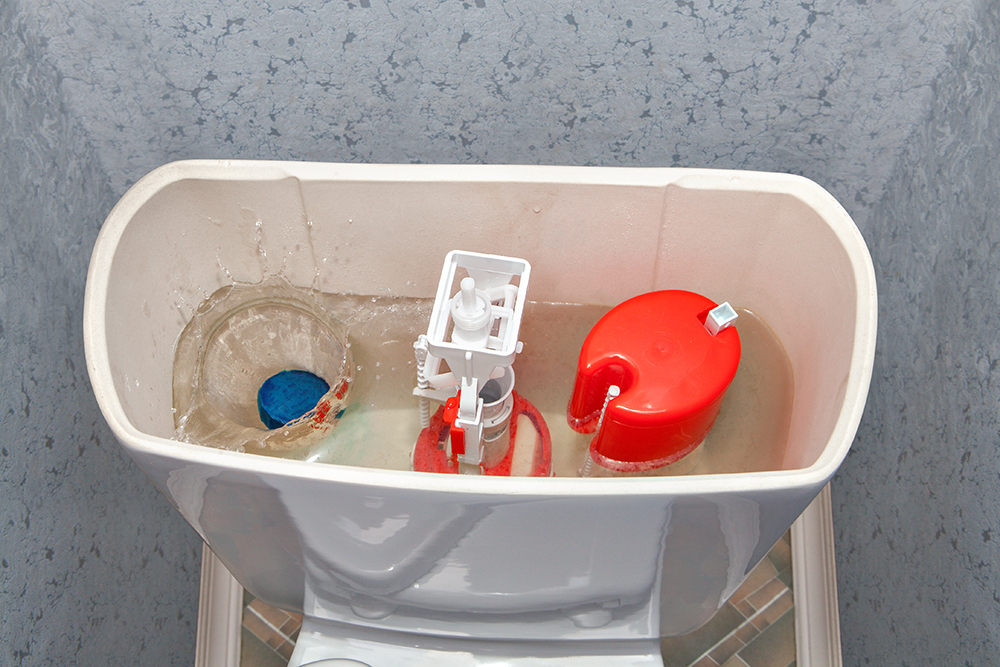 If water continues to run into your toilet bowl after flushing, the first thing you should do is lift the lid off the cistern and examine what the issue may be.

If that’s not the issue, is the flapper valve sticking open and not covering the valve? If this is the case, simply reach into the tank and close it to solve the issue.

Still not found the problem? Locate the ballcock or float valve and lower it. This should lower the water level in the cistern, preventing it from getting too high and consequently stopping that running toilet.

Once your plumbing problems have been resolved, double-check that nearby sockets, switches and electric equipment are dry. Don’t turn the power back on until they are completely dry.

Make sure everyone in your home knows where the valves for your plumbing system are and check them every couple of months to ensure they can be turned on and off with ease. If not, apply a little penetrating oil to the valve to loosen it up.

To help deter problems in the future, it's a good idea to get into the habit of regularly cleaning drains to prevent blockages. It's also useful to make a note of your water usage—if it seems exceedingly high, there could be a leak.

Finally, ensure you have a well-stocked toolbox that's easily accessible in case something goes awry.

READ MORE: 21 home improvements that are a waste of money