From fountains to wood floors, this house is a rare find 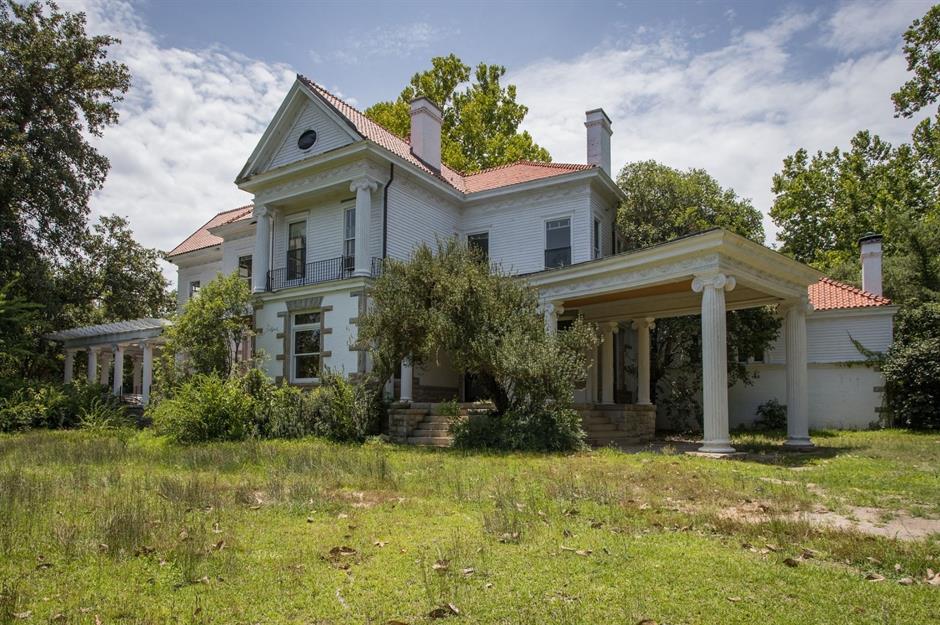 A stunning example of Queen Anne architecture, this palatial property has sat empty since 2015 and is said to be one of the only unrestored late 19th-century mansions in all of Georgia, USA. Thanks to photographer Leland Kent of Abandoned Southeast, we can now take a tour of this imposing Southern estate and discover its fascinating history, from the breathtaking design to the famous guests that graced its halls, including a former president. Could this be the most beautiful derelict dream home ever? Click or scroll on to step inside... 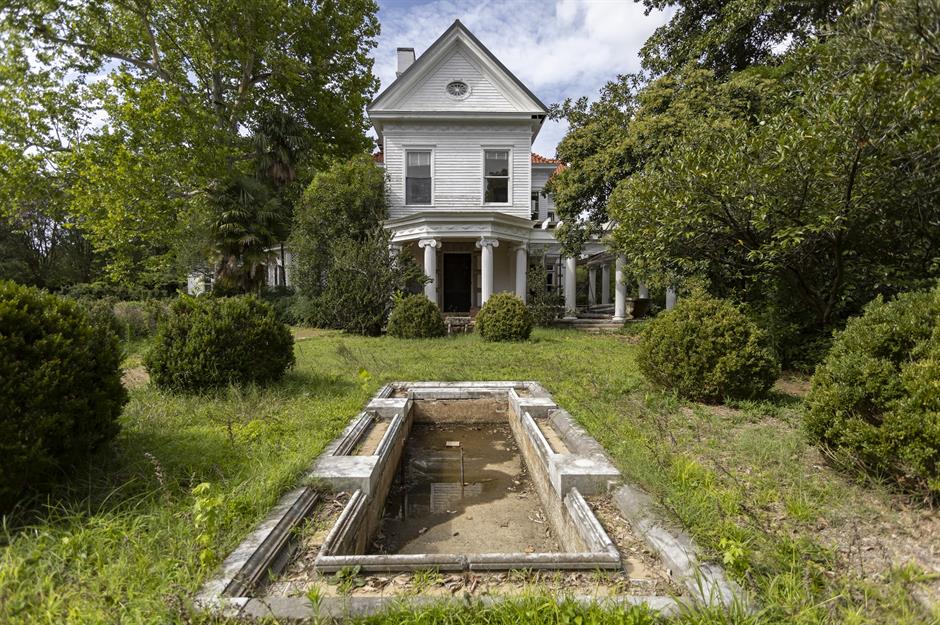 Now up for sale for $1.3 million (£947k), the grand old house, known today as the Harris Clay Mansion, was constructed around 1893 by Landon Thomas, Junior. Thomas moved to the city of Augusta, Georgia and decided to settle in the region, marrying Mary 'Minnie' Fleming. They went on to have five children and, set on making his fortune, Thomas established the Fleming and Thomas banking firm. 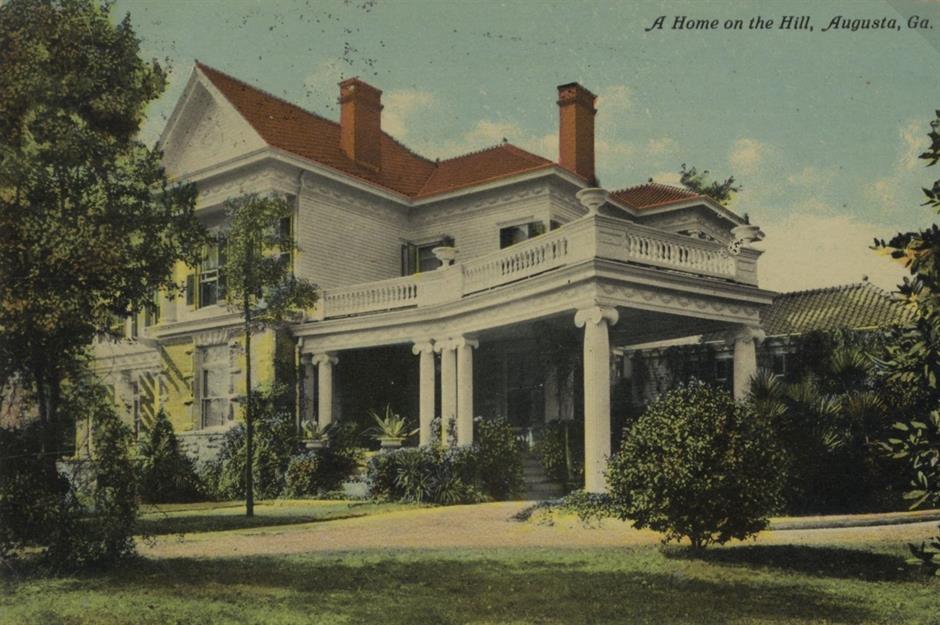 In 1886, the couple purchased a home on the site but sadly it burned down in 1890. In its place, Thomas built this grand mansion in the Queen Anne and Colonial Revival styles, naming it Cloister Garth. With a structure comprising stone, brick and wood with a red clay tile roof, it wasn't long before the imposing property became a local landmark in the city of Augusta. In fact, so impressive was the house, that it even featured on a postcard (pictured) at the turn of the 20th century. 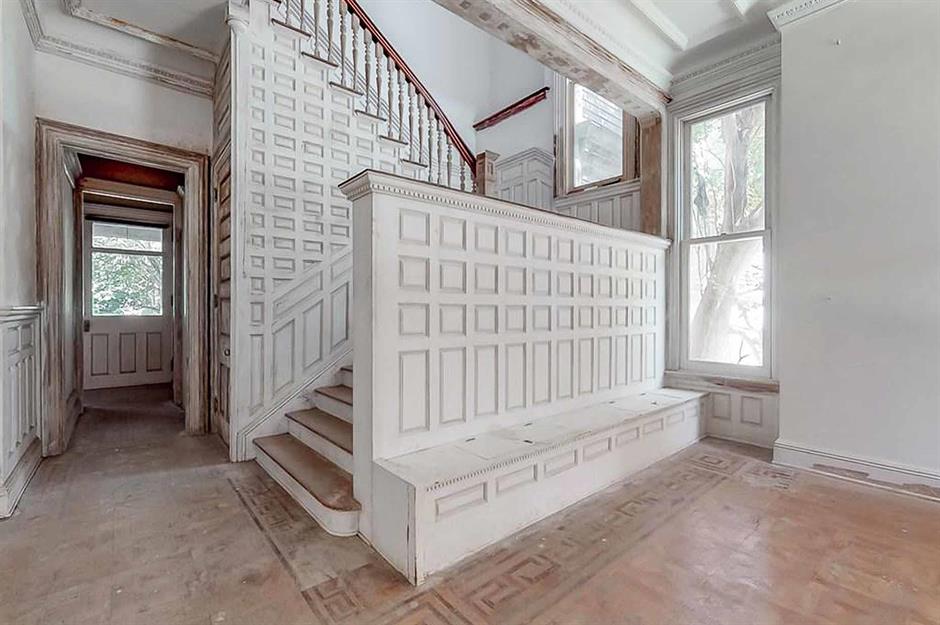 The house has an unusual design due to its asymmetrical floor plan, which was rare for the time. Featuring an angular porte-cochère, the front entrance is undeniably imposing, balanced on the other side of the house by a sun porch. Step through the front door and you're greeted by an impressive entryway and a staircase clad in striking whitewashed wood panelling. 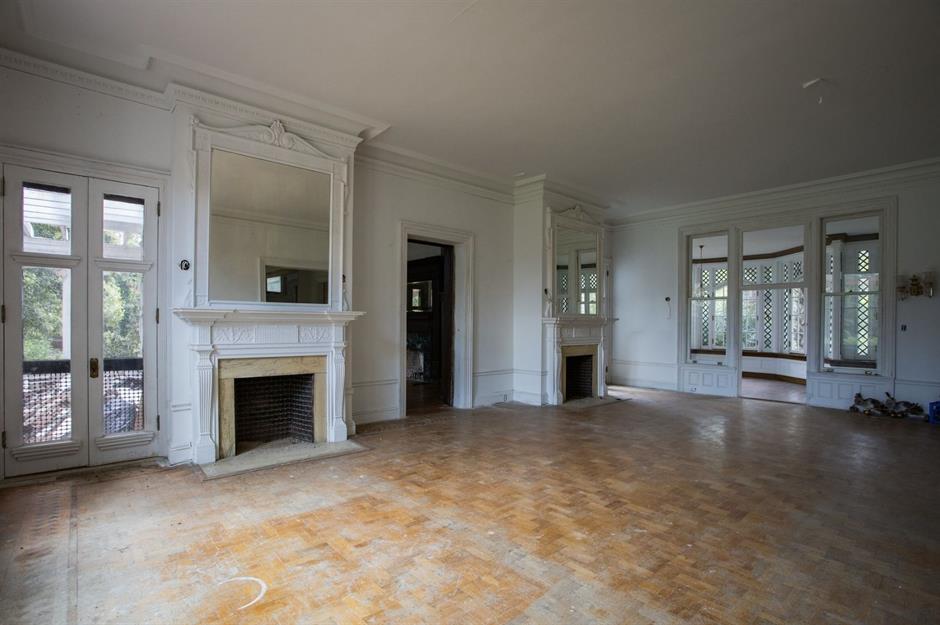 Nicknamed 'A Home on the Hill', the mysterious mansion is kitted out with elegant hardwoods, parquet flooring, original mouldings and millwork, adding drama and grandeur to every single room. These features can still be seen to this day, as well as oversized Palladian and double-hung windows, which offer unobstructed views across the garden. 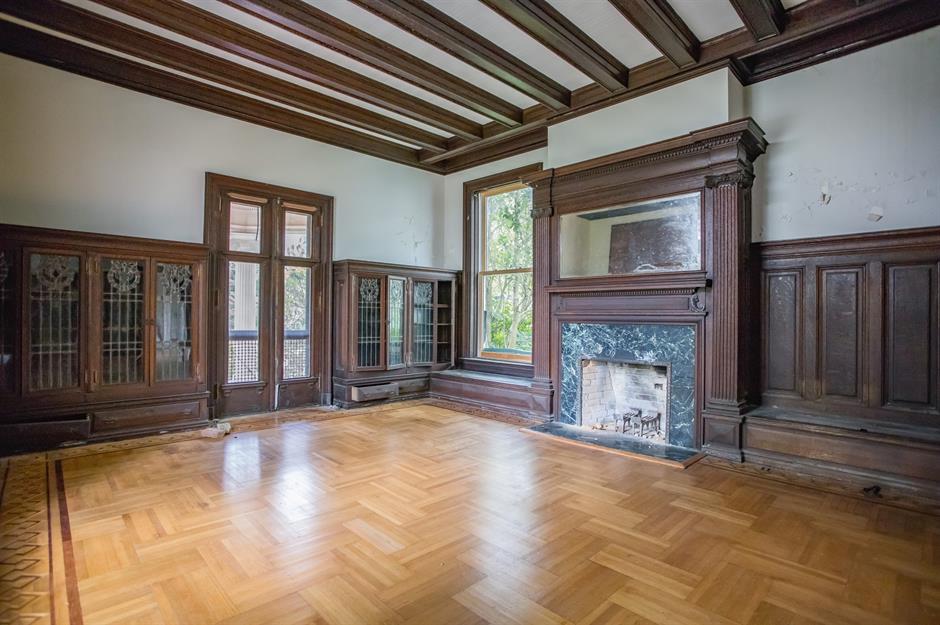 According to the National Park Service, Thomas served as president and later chairman of the John P. King Manufacturing Company's textile mill. His wealth and social status meant he was a prominent figure in Augusta's high society, no doubt holding many a gathering at the house – perhaps in this magnificent drawing room with its intricate glass-fronted cabinetry and dramatic beamed ceiling. 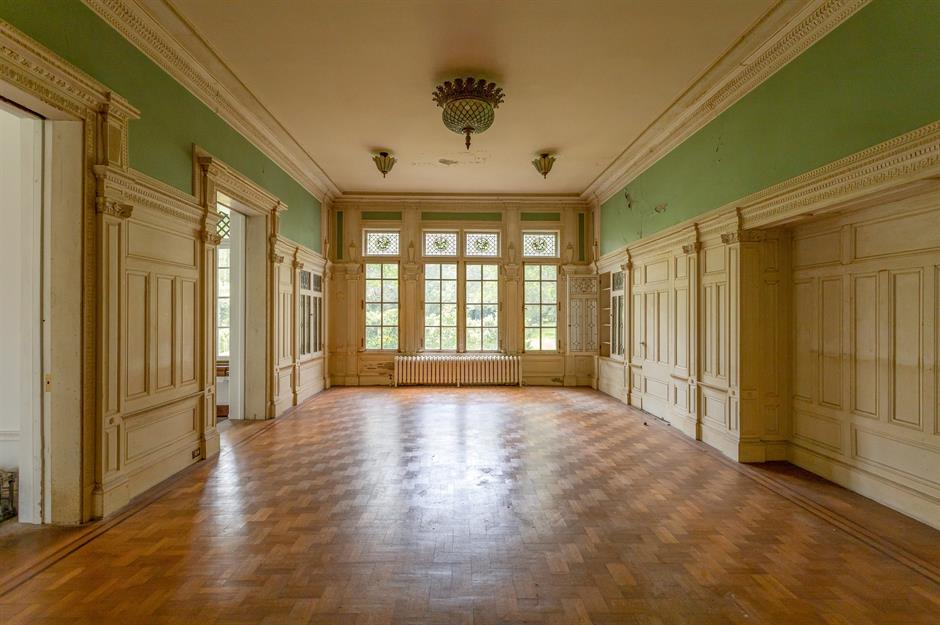 Thanks to his social standing, Thomas regularly hosted local celebrities and important visitors, including the likes of President William Howard Taft, the 27th president of the United States, and Supreme Court Justice Joseph Rucker Lamar. Truly fit for VIP guests, the historic mansion would have made quite the impression, particularly this dazzling formal room, which features fine parquet flooring, decorative panelling and beautiful stained glass. 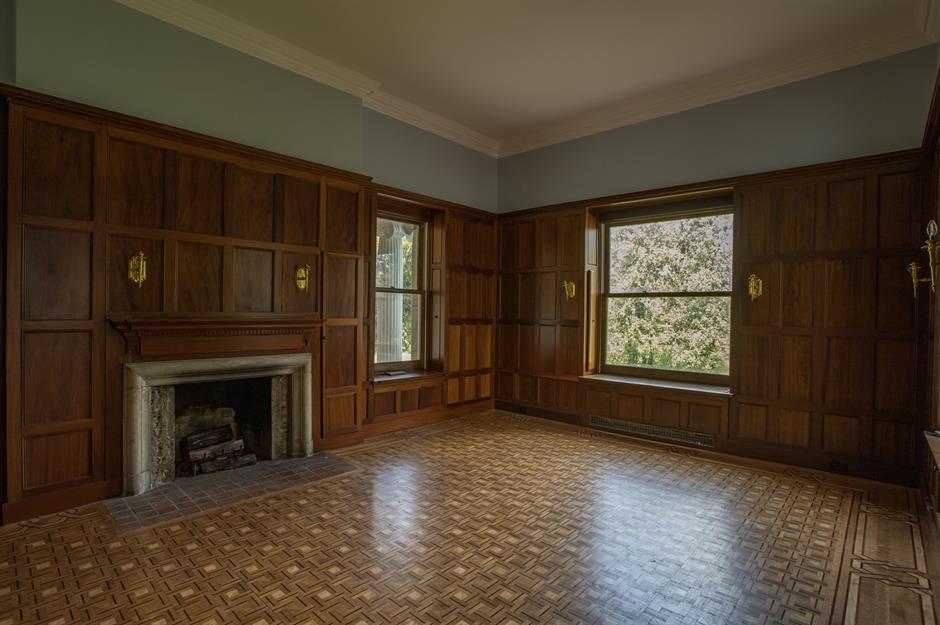 This imposing space is equally as impressive, from the ornately bordered wood floor to the regal stone fireplace. Sadly, tragedy rocked the local community in 1923 when Thomas' wife, Mary, suffered a stroke and suddenly passed away. Following her death, Thomas retired from his position on the mill board and in 1926 his son, Landon A. Thomas III, took over the reins as president. Thomas continued to live at Cloister Garth until he passed away in 1944 at the age of 85. 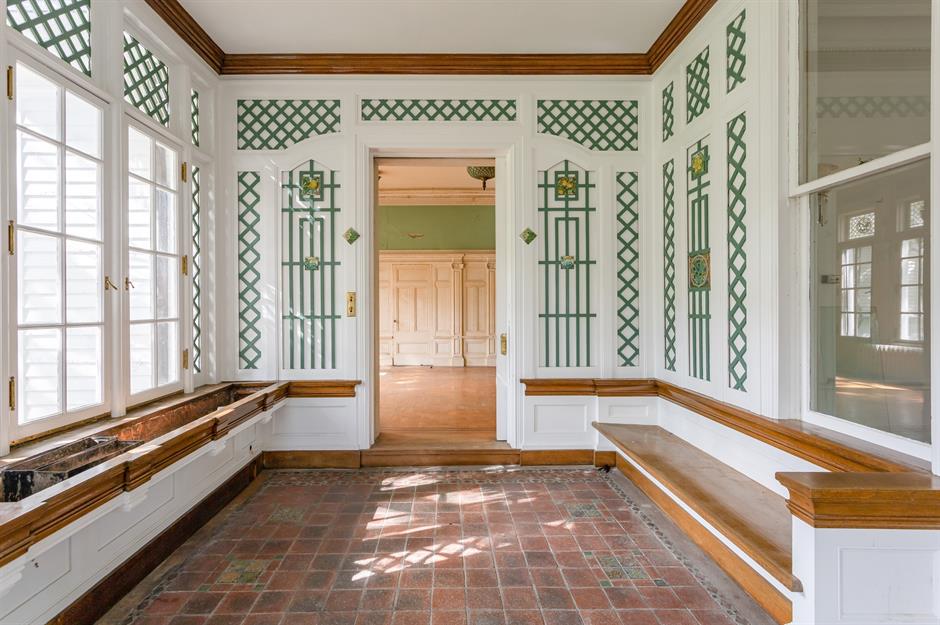 Featuring striking stained glass with an intricate lattice design, this beautiful sunroom has weathered the years remarkably well. Luckily, the stately home remained in the family and Thomas’ nephew, Harris Clay, soon became the owner, with his name later becoming a moniker for the grand house. After serving in the United States Navy during the Second World War, he returned to Georgia and followed in his forebearers' footsteps, rising to become the CEO of the family’s textile mill. 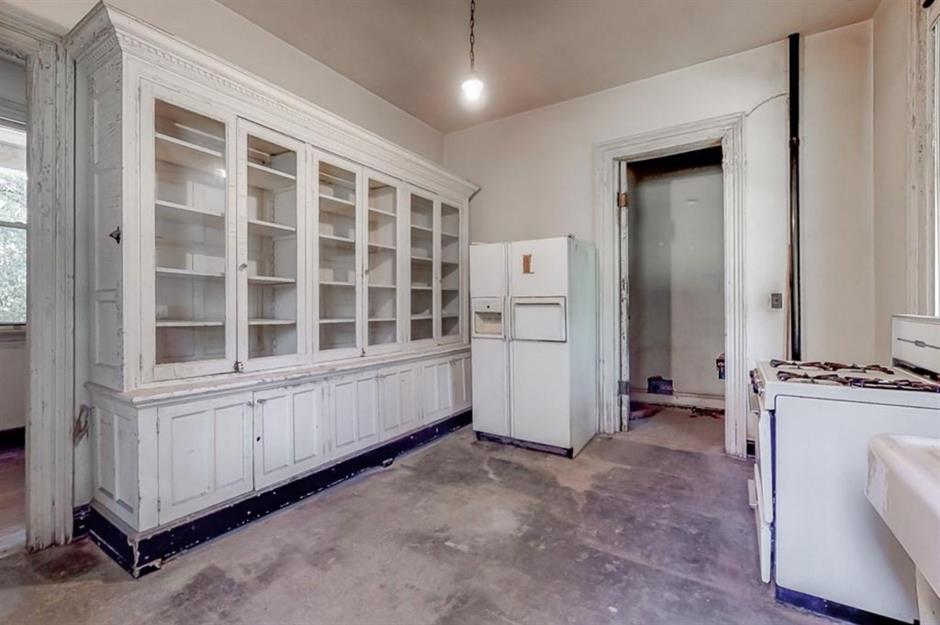 While time has taken its toll on the kitchen, original appliances from the last residents remain, though the shelves of the cabinetry have since been stripped bare. For their time, the Clay family were forward-thinking and progressive. Clay’s brother, Cassius Marcellus, was a champion of emancipation and campaigned to abolish slavery. Marcellus’ daughters, Laura and Mary, were also leading members of the women’s suffrage movement and in 1920, Laura became the first woman to receive a presidential nomination at the Democratic National Convention, according to Abandoned Southeast. 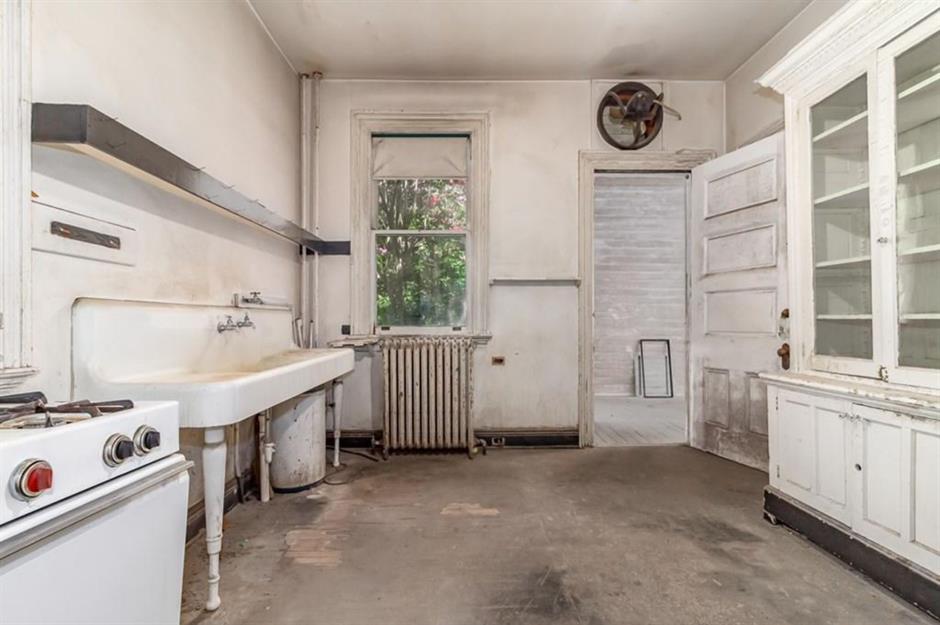 Most of the living spaces are in a reasonable condition, however, signs of neglect are evident in this part of the kitchen, from the greying woodwork to the worn fixtures. After a highly successful career as both a businessman and later a geologist, Harris Clay passed away at the mansion in 2015 at the age of 88. In his will, he gave the first right of refusal of the property to the neighbouring church, who purchased the home but never put it to use. While still thought to be under their ownership and not technically abandoned, the building has stood empty for some time. 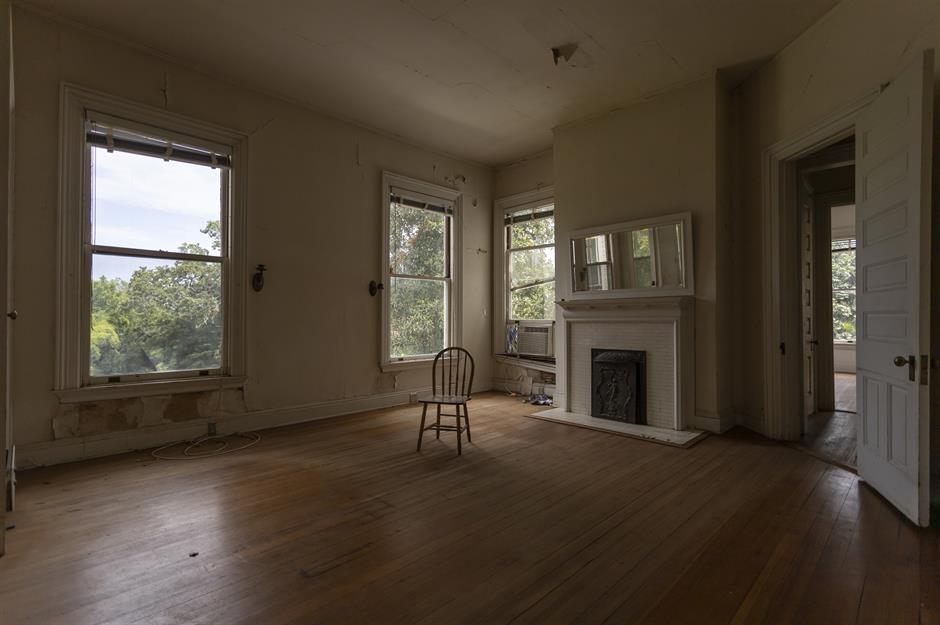 According to Realtor, the empty mansion spans an impressive 7,476 square feet and features eight bedrooms and six bathrooms. There are numerous elegant formal living rooms, as well as a wood-panelled library and a large kitchen that leads out to the garden. 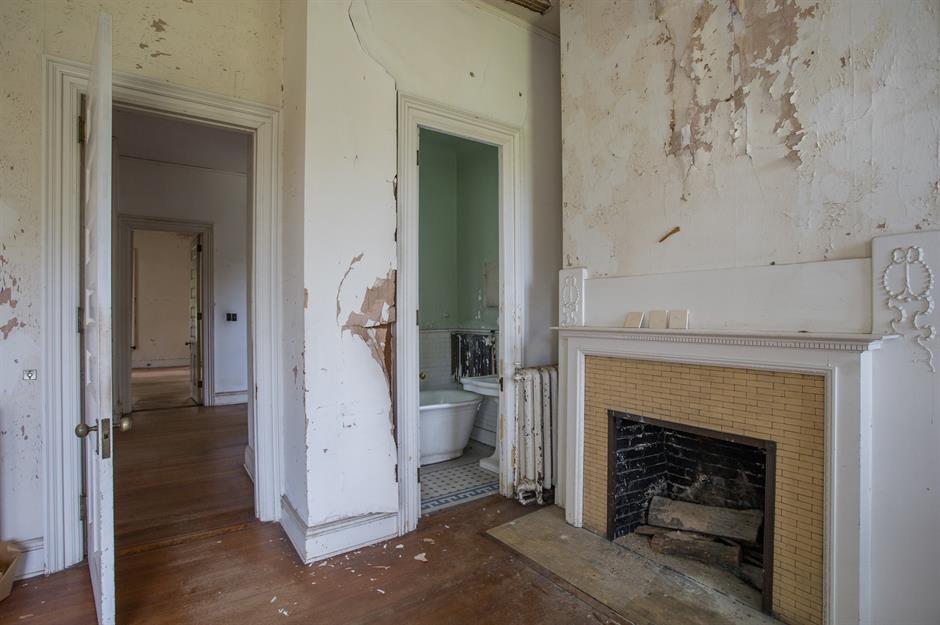 Upstairs, you'll find a whole host of abandoned spaces, some of which are still equipped with antique furnishings and fixtures, perhaps left behind by Clay himself. Aside from the crumbling plaster, this beautiful old house is far from unappealing and it isn’t difficult to imagine how incredible the property would have looked in its heyday. 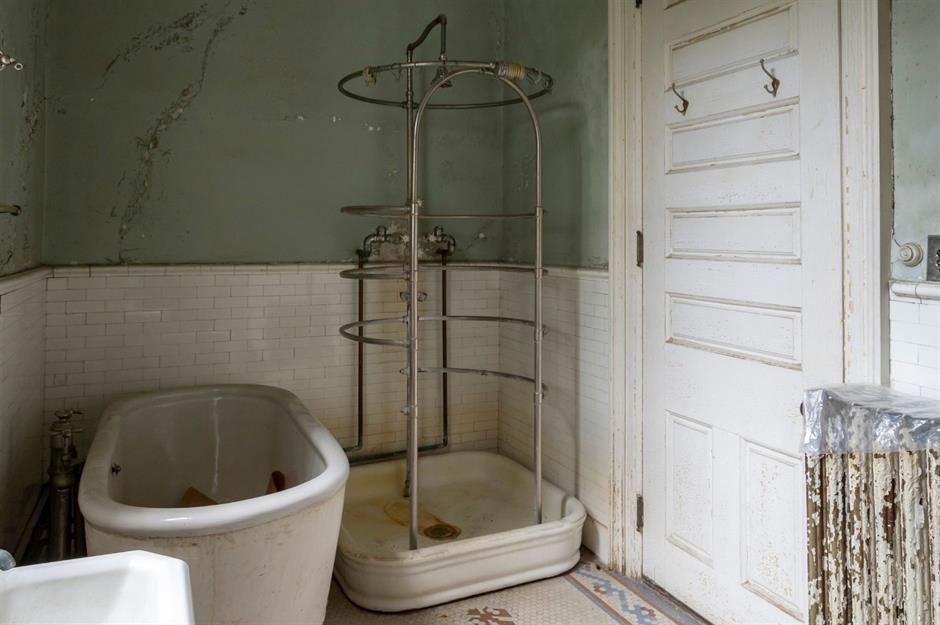 One of the home's bathrooms appears almost untouched since the house was built. With a Victorian rib cage shower and a stunning statement floor formed from tiny mosaic tiles, it's a true time capsule of interior design. 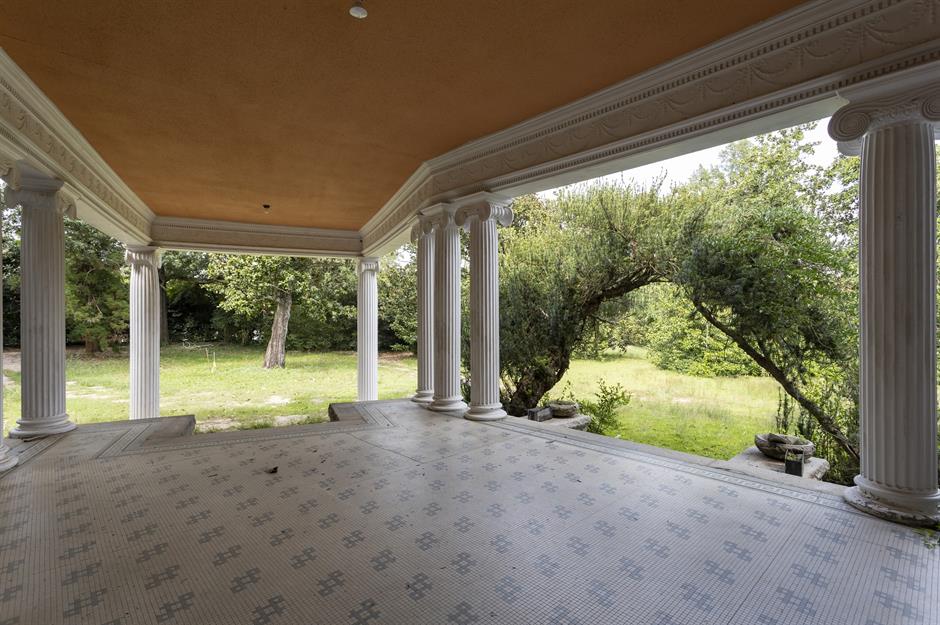 Of course, the home's exterior is just as enchanting as its interior. The asymmetric porte-cochère, shown here in its full glory, was likely a key space for hosting soirées back when the house was at the heart of high society. The grand covered terrace leads down to the lush grounds, which sprawls more than three acres. 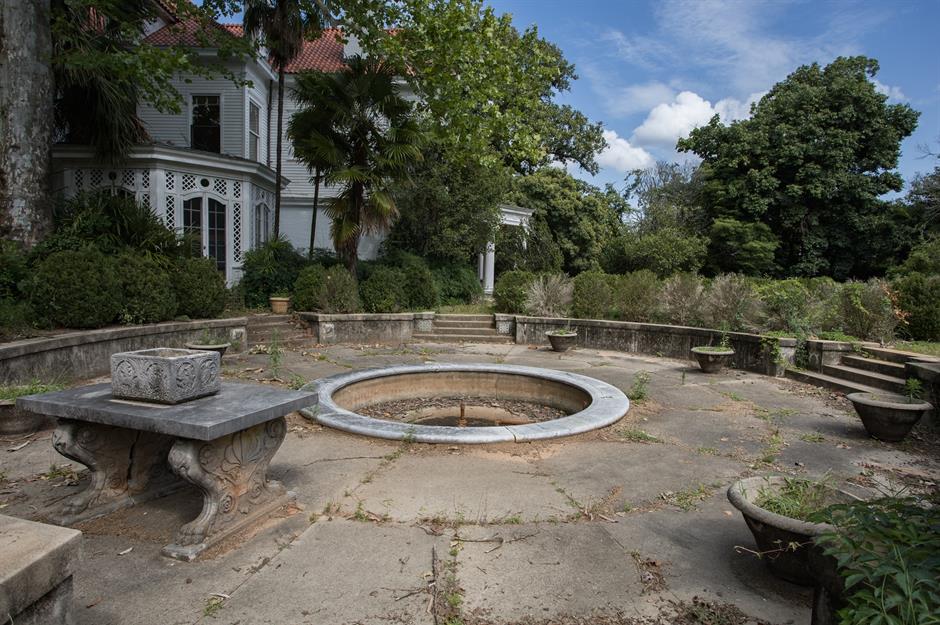 The home's stunning grounds feature historic fountains and formal gardens, which have slowly fallen by the wayside. Yet it's easy to imagine this tranquil water feature taking centre stage at a party, as Augusta's well-to-do sipped champagne and mingled in the moonlight. 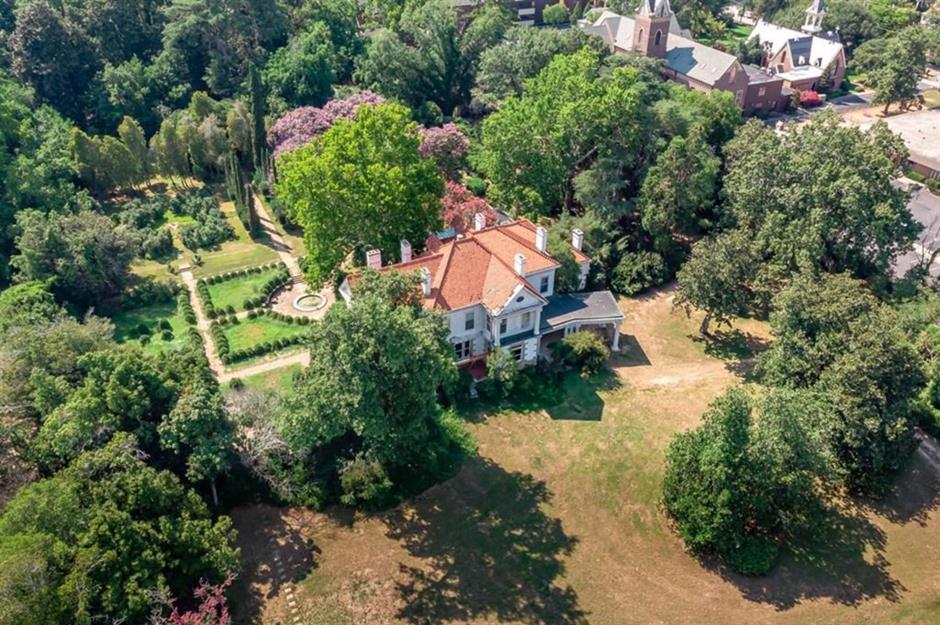 From above you can see the true splendour of the Harris Clay mansion, including its beautiful landscaped gardens, which would once have been a truly spectacular sight. Given a generous budget, elbow grease and a dose of creative thinking, this once-exceptional estate could soon be brought back from the brink. 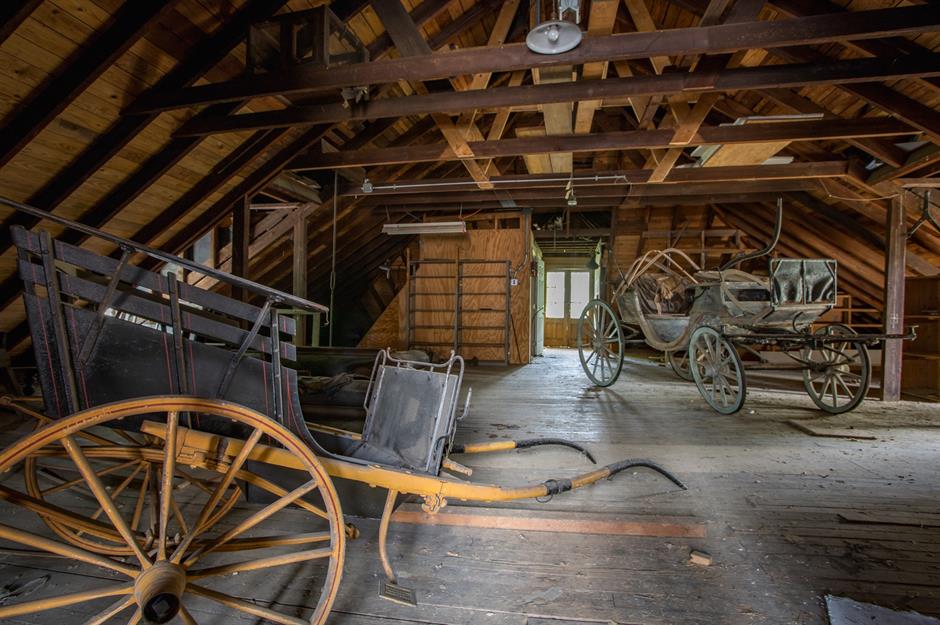 The crumbling mansion also boasts numerous service areas and outbuildings that are in much the same state of disrepair and awaiting restoration. In the rafters of one structure, you'll even find old horse-drawn vehicles that could date back as far as the late 1800s. Offering real insight into the lives of this prominent family, this barn is among the home's most fascinating spaces.

Searching for a buyer 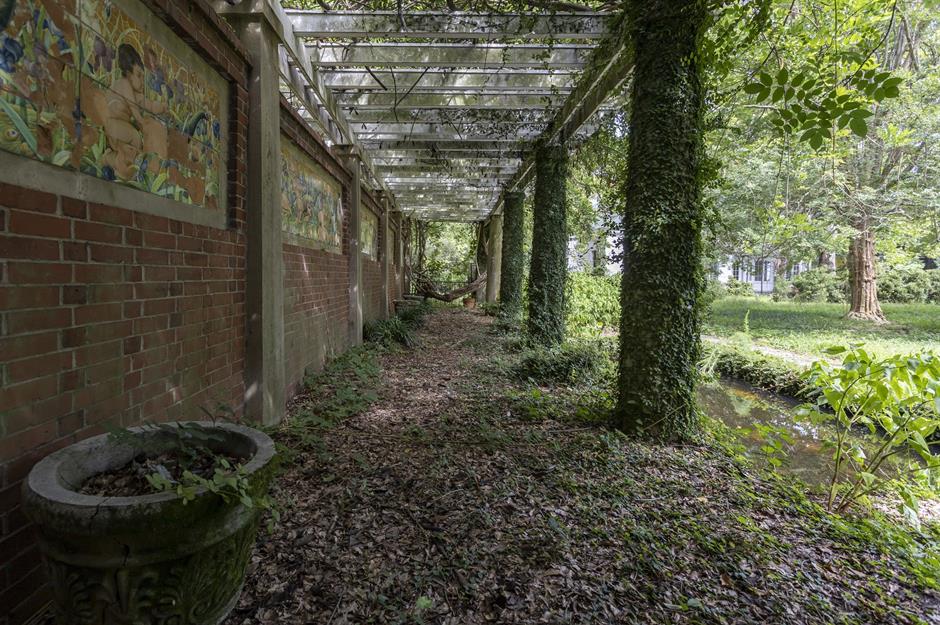 According to records, the house was listed in June 2019 for $1.6 million (£1.2m), but by January 2021, the price tag had dropped when a buyer couldn't be found. While the ownership of the mansion is unclear, it's thought that the local church who purchased the property following Harris Clay's death are the sellers. 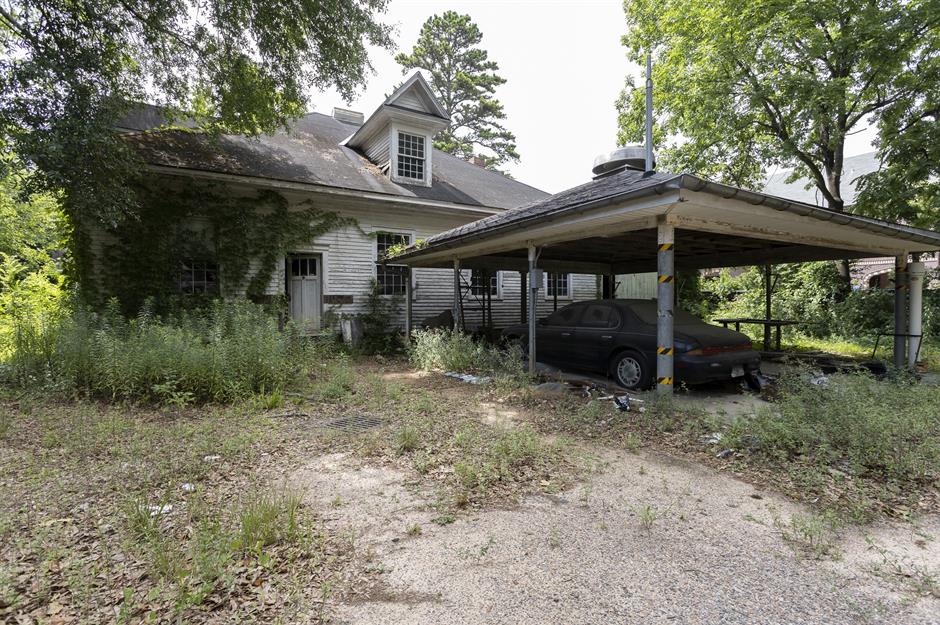 The property is currently for sale with Blanchard & Calhoun Real Estate for the sum of $1.3 million (£947k). With so much space and potential, we can't help but fall in love with this spectacular stately home. Here's hoping this remarkable residence finds a buyer with the desire, imagination and resources needed to restore it to its former glory...