Be the boss of your own town 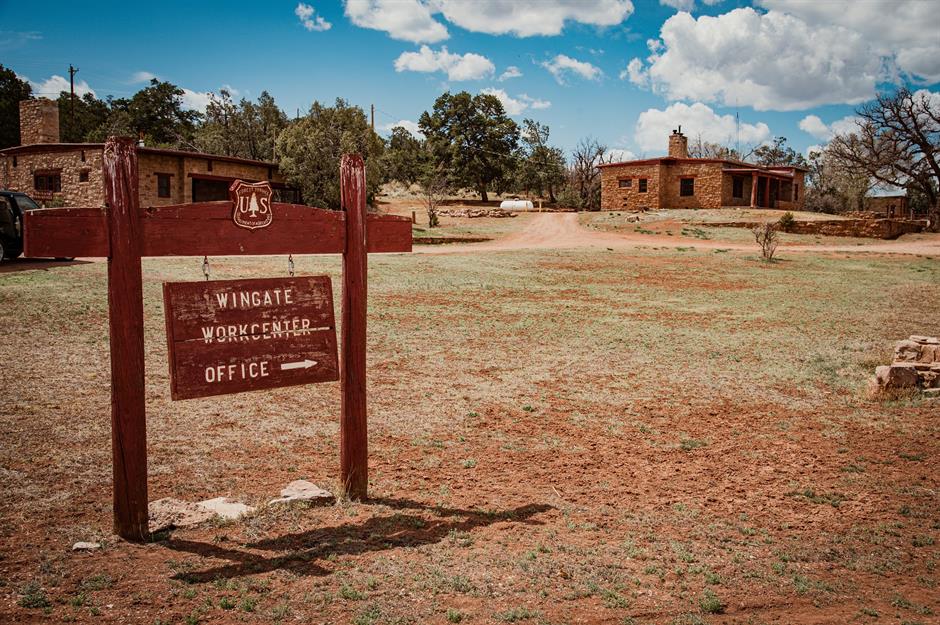 If owning your own village sounds like a dream come true, then this unique real estate listing could be just what you're looking for. On the market for a cool $11 million (£8.2m), this small town and abandoned military base has a fascinating back story and plenty of potential. Click or scroll on to discover the secrets of this important American community and take a look around... 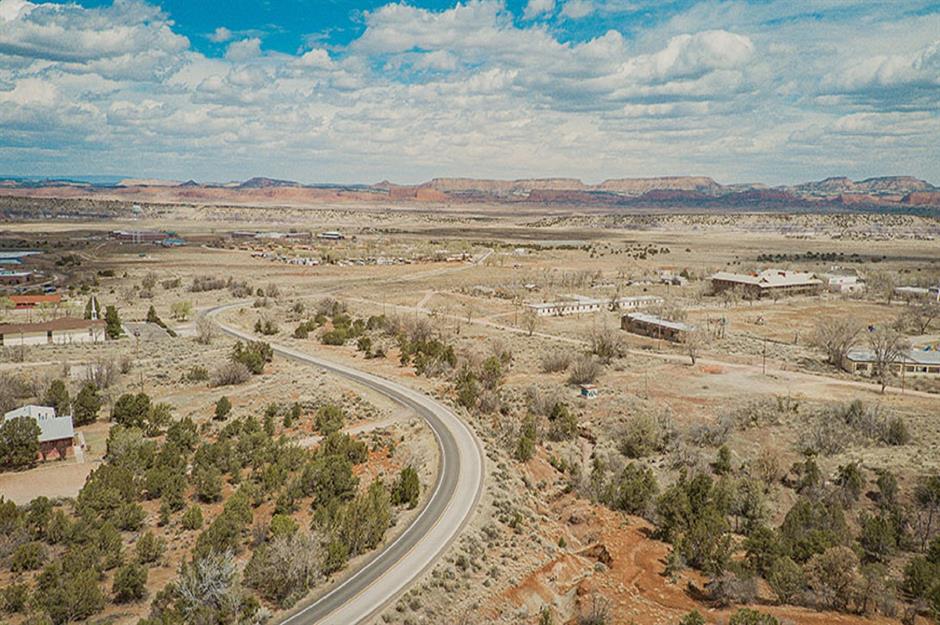 Nestled among a unique red landscape some seven miles east of the city of Gallup, New Mexico, Fort Wingate was founded in 1867. Situated along Interstate 40, the former military base and its small surrounding town have a long and complicated history. 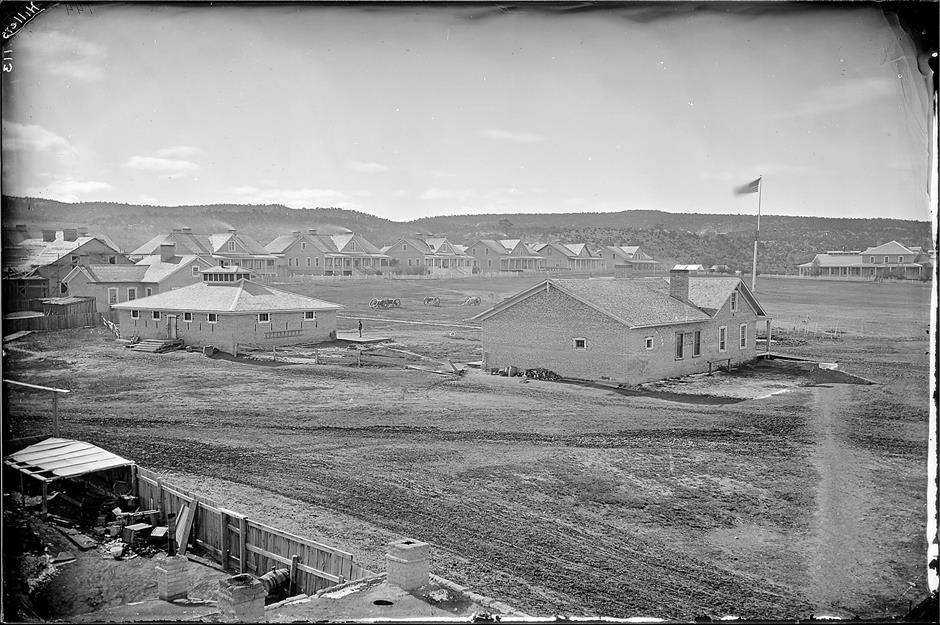 Before it was a military base, the site was the ancestral homeland of both the Navajo Nation and Zuni indigenous tribe. They’d lived on the land for centuries until the United States military forcibly took the land from them at great human cost. While a treaty was signed in 1868 allowing the Navajo to return to their homes, they had to remain within a restricted area and their reservation became home to Fort Wingate. 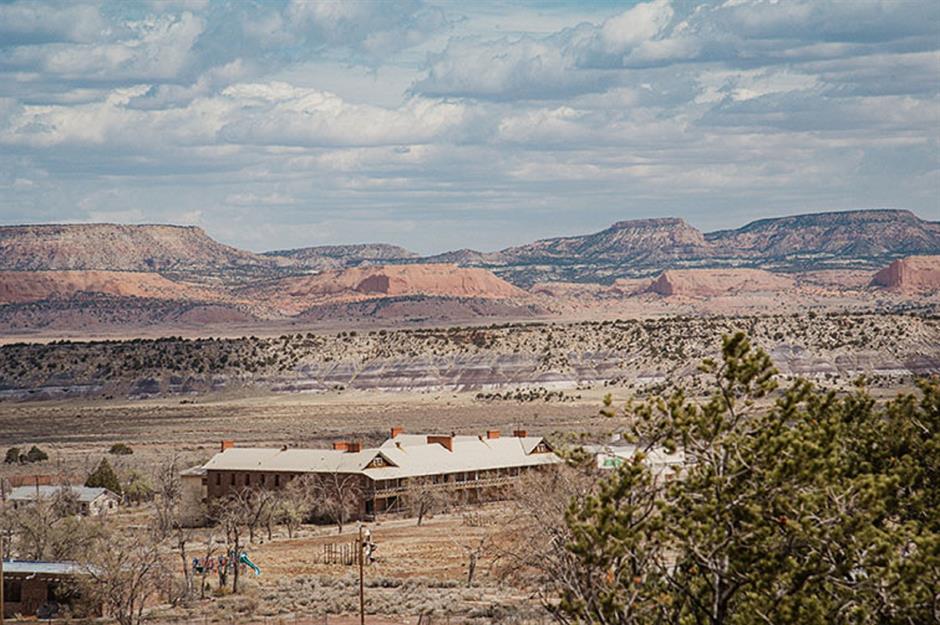 Fort Wingate remained active and operated mainly as a police base for the Navajo reservation, before being decommissioned in 1912. Following its retirement, it was used as a detention camp for refugees fleeing the Mexican Revolution, then repurposed as an ordnance depot and an Indian school. 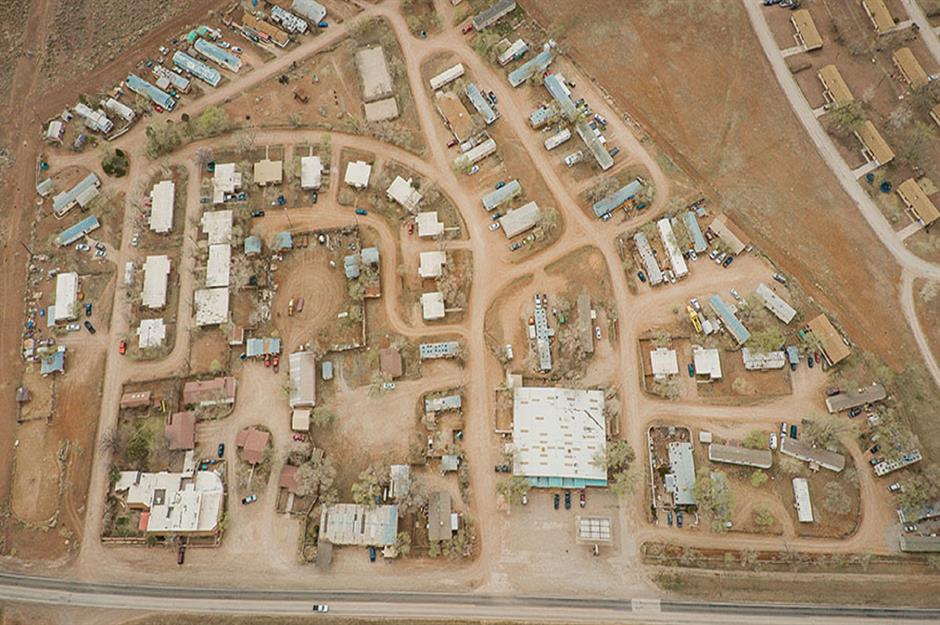 Fort Wingate has been in the current owner's family since 1946, but it's now up for grabs. Mark Price of Realty ONE Group, the town's listing agent, told the New York Post that the owner has managed the town for decades, acting as the fire chief, the police and the landlord. "The current owner has lived there his entire life. He has never been outside the lines of the town and the family now wants to spend the rest of time traveling", explained the realtor. 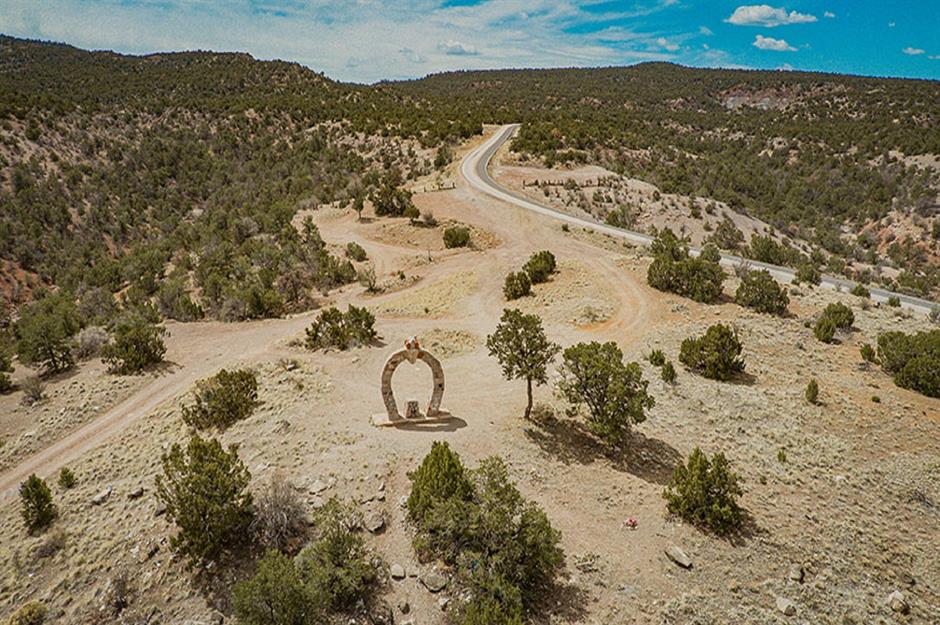 The property encompasses 18 acres of land and signs of the village's indigenous history are still present today. Across the acreage, you can see 400 ruins created by the Navajo Nation and Zuni indigenous tribes, which have remained remarkably intact. 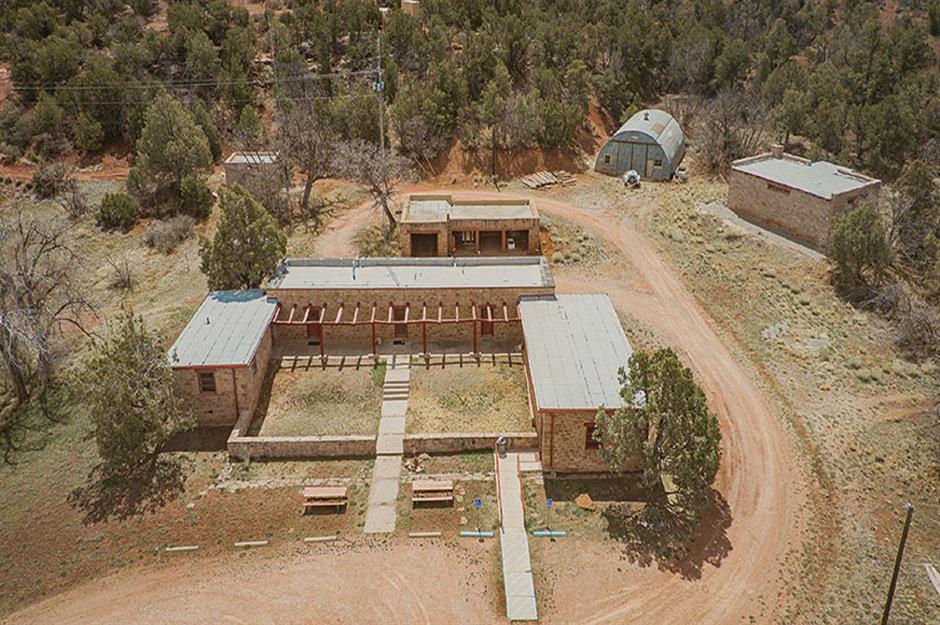 Now a national historic site, the abandoned military base is still standing too and comes complete with the sale. Over the decades, the site was home to a regiment of the Buffalo Soldiers, an all African-American brigade, and the Navajo code talkers, Fort Wingate’s most important contribution during the Second World War. The code talkers were able to stump Japanese forces thanks to a code they created based on the Navajo language. 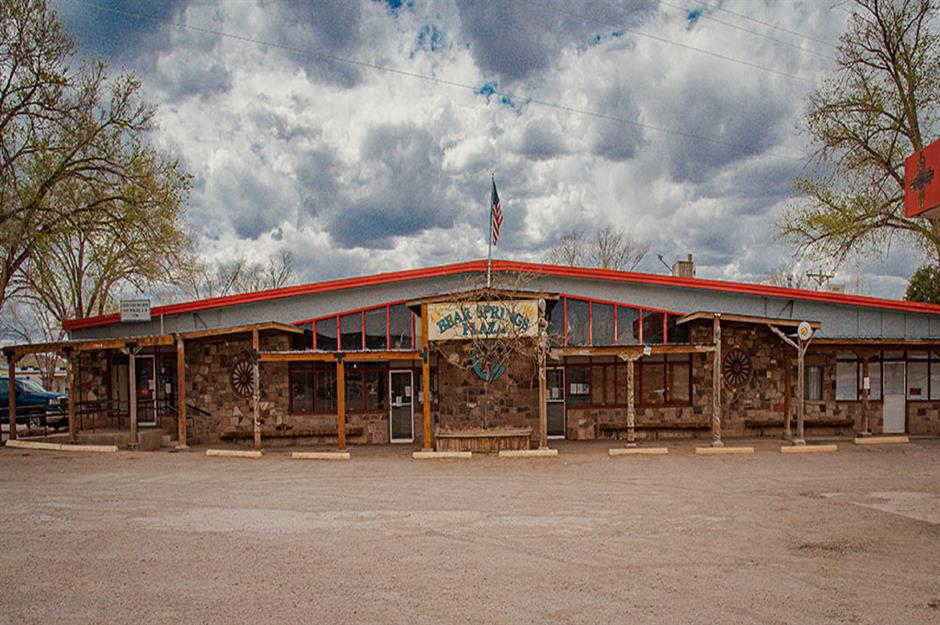 Later, during the Second World War, Fort Wingate became a key military base along Route 66 and was used as a transport corridor for troops and supplies. Thanks to this, the settlement became a bustling hub that encouraged economic growth in the area. Stores cropped up, serving visitors, military forces and locals, many of which are still present in the town day and are included in the sale. 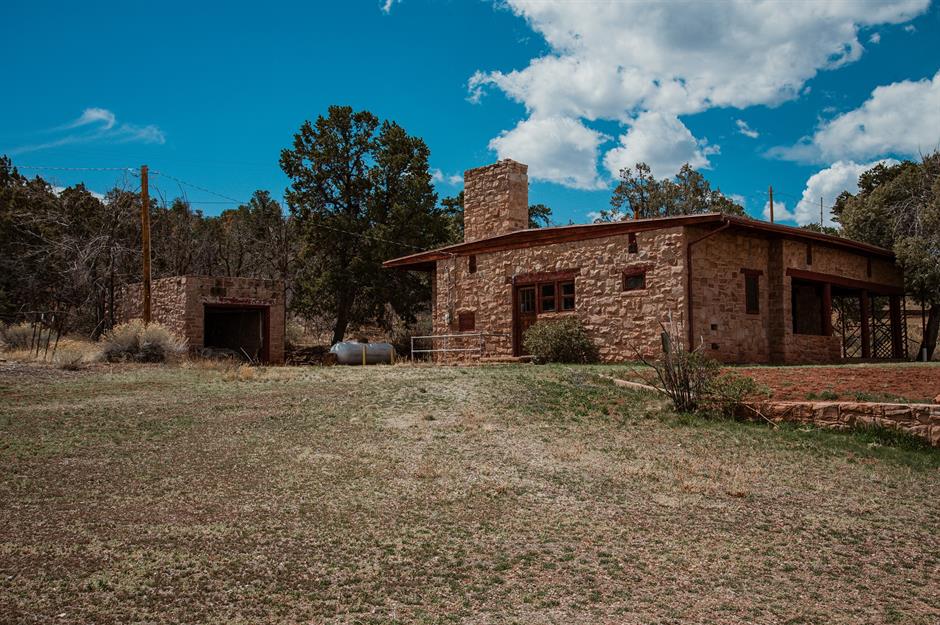 The listing offers much more than just the former barracks and a few stores though. It comes complete with parade grounds, a clubhouse dating back to 1883 and a row of officers’ quarters that from the early 1900s. The potential for this historic piece of real estate will be endless for the village's lucky buyer.

Mayor of your own town 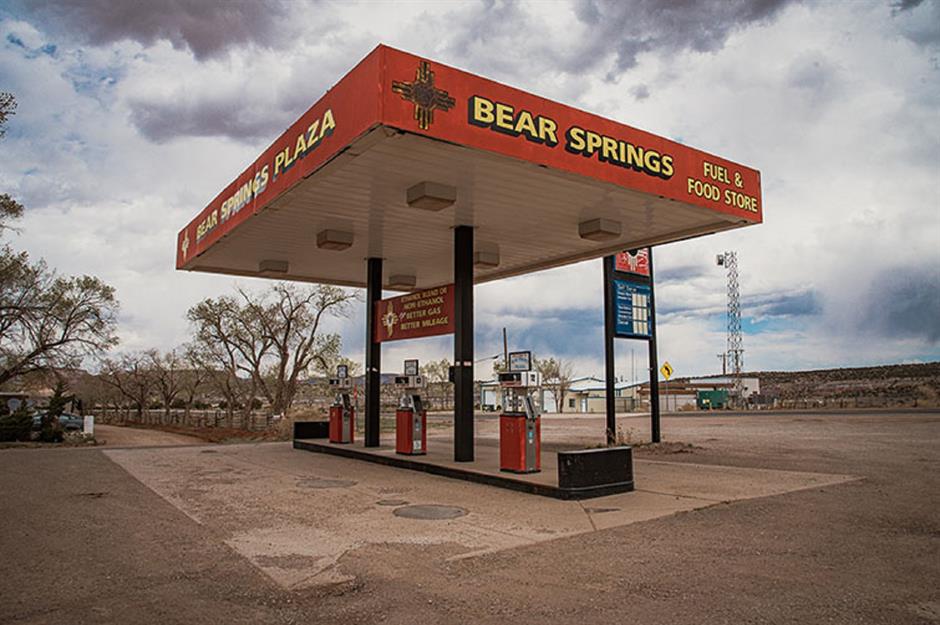 There's even a gas station that appears not to have been touched for many years. The settlement still bears other intriguing reminders of its past, too. There's an original trading post, RV parking, a maintenance shop, numerous storage buildings and a convenience store – with this listing, you could become mayor of your own town! 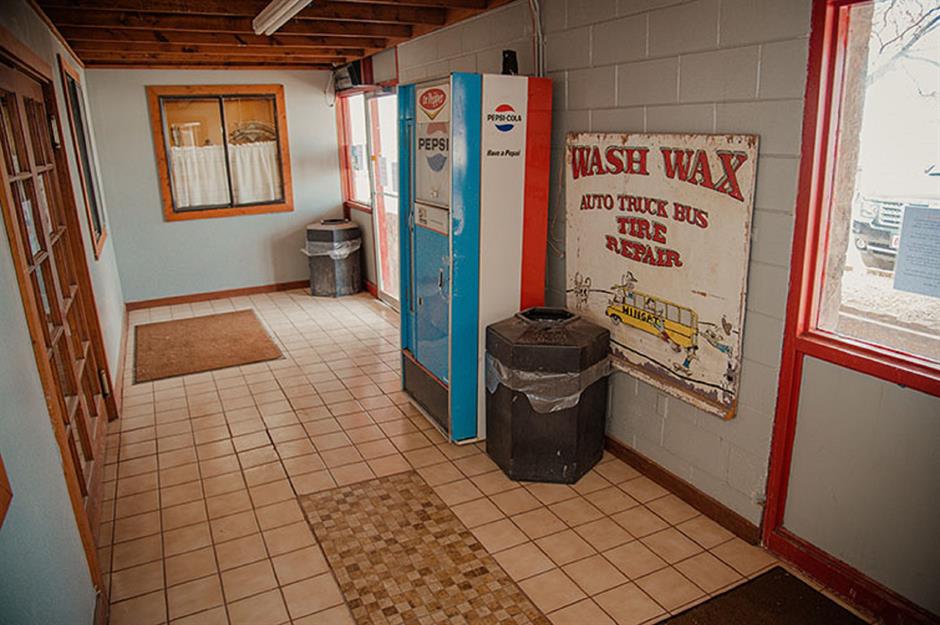 Formerly known as Fort Fauntleroy, the estate also served briefly as a mail station. However, the post office, which is located inside the village's cafe, is still in use. A school is also situated just outside the settlement too, so there are plenty of amenities nearby to draw families to the town.

Space for work and play 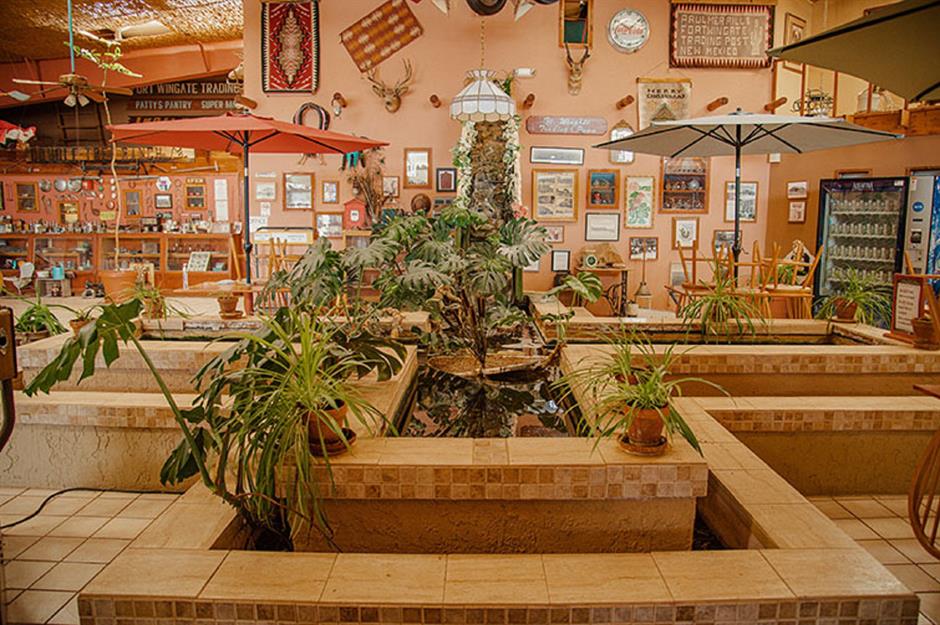 This huge building is one of the largest on the 18-acre site. Known as Bear Springs Plaza, the building is home to a once-thriving café and store, which could easily be revived by the new owner of the town. So, if you want a home with a job thrown in, this could be the listing for you... 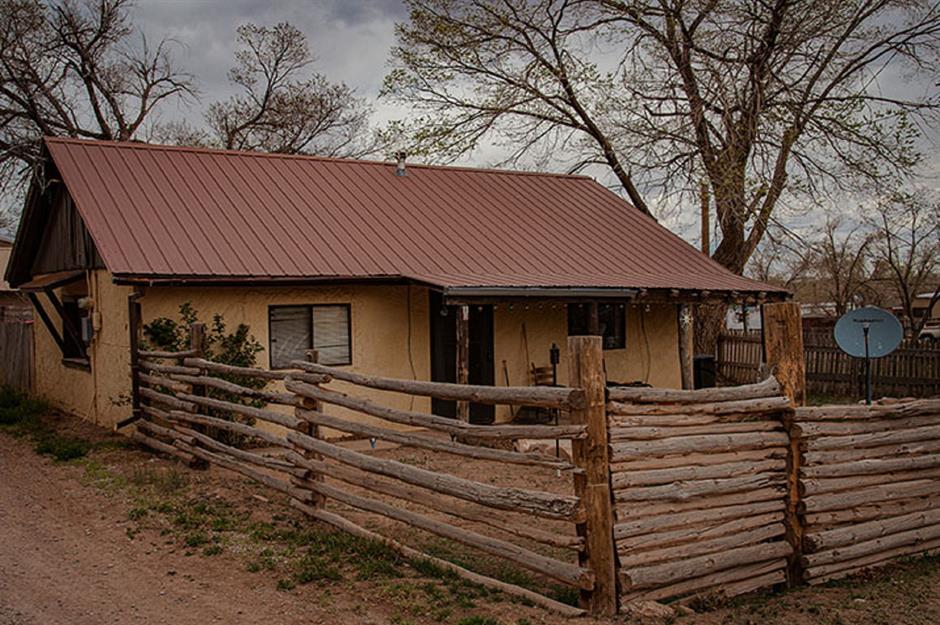 In addition to the commercial opportunities, the listing boasts 27 residential homes, all very unique in their design. All of the properties are currently occupied and the current owner is ideally looking for someone to take over the business and maintain the rental units. 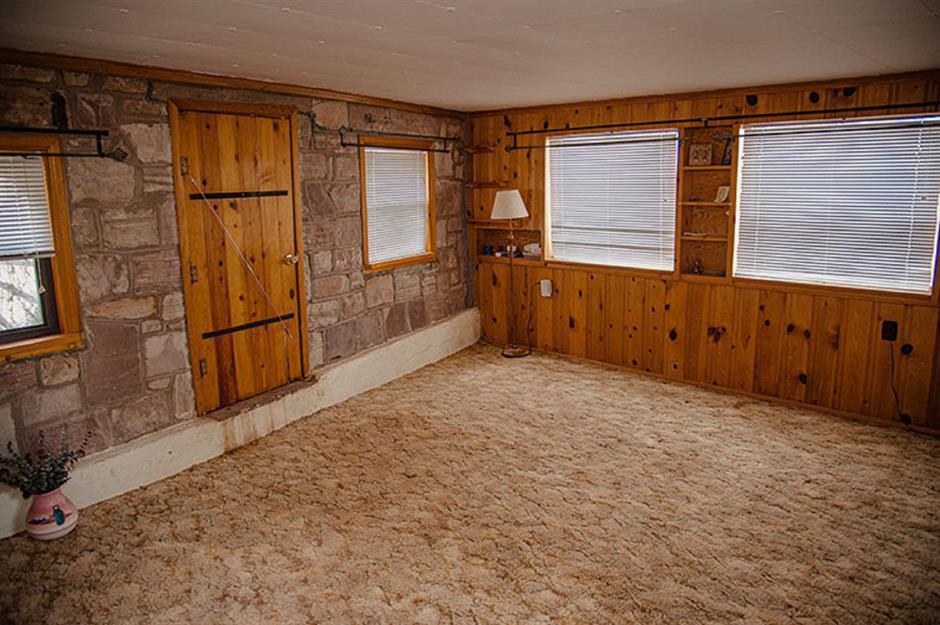 Stepping inside one of the homes, you can really get a sense of life in this small town. Cosy and compact, this property offers a rustic and homely aesthetic, thanks to its natural stone and timber walls. 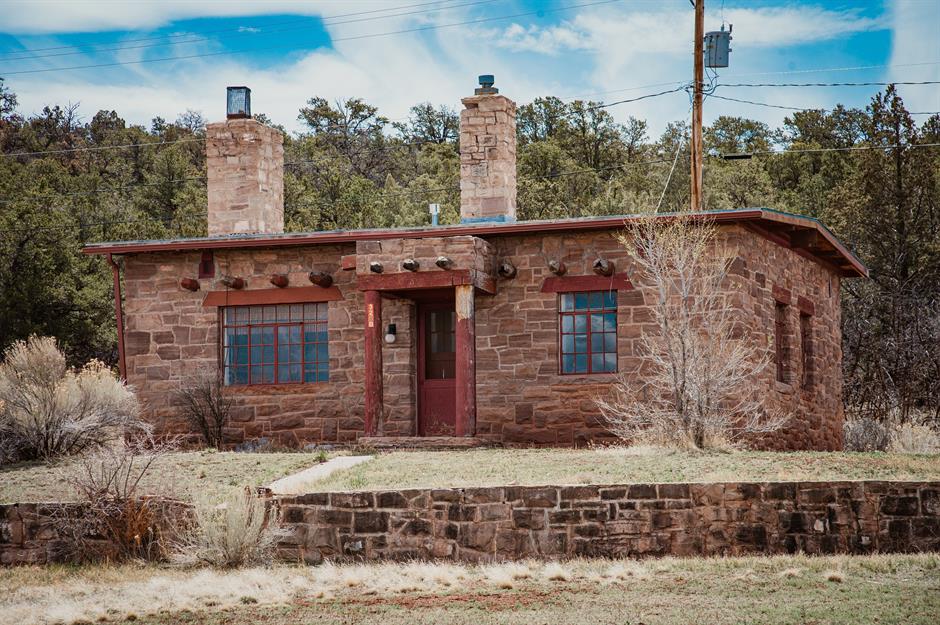 In 1896, a fire destroyed many of the fort’s original buildings and these were replaced with structures formed from local red sandstone in around 1900. Some of these characterful properties can still be found at Fort Wingate and are included as part of the sales listing. In 1978, the National Park Service added Fort Wingate to the National Register of Historic Places. 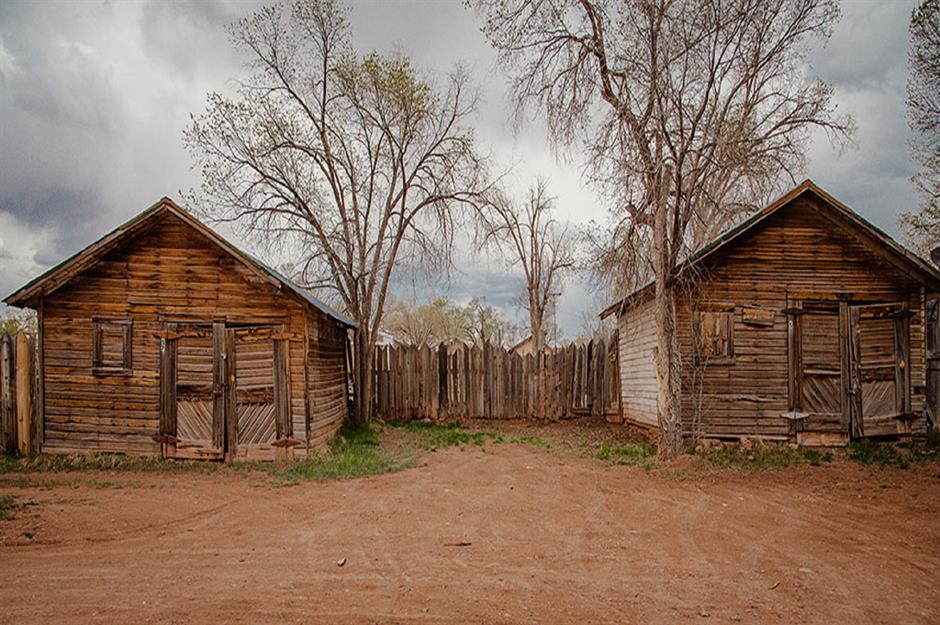 Some of the buildings on the site could easily be transformed into something really special – from studio spaces to workshops or even rental ventures. This timber shack is just crying out to be given the Fixer-Upper treatment! 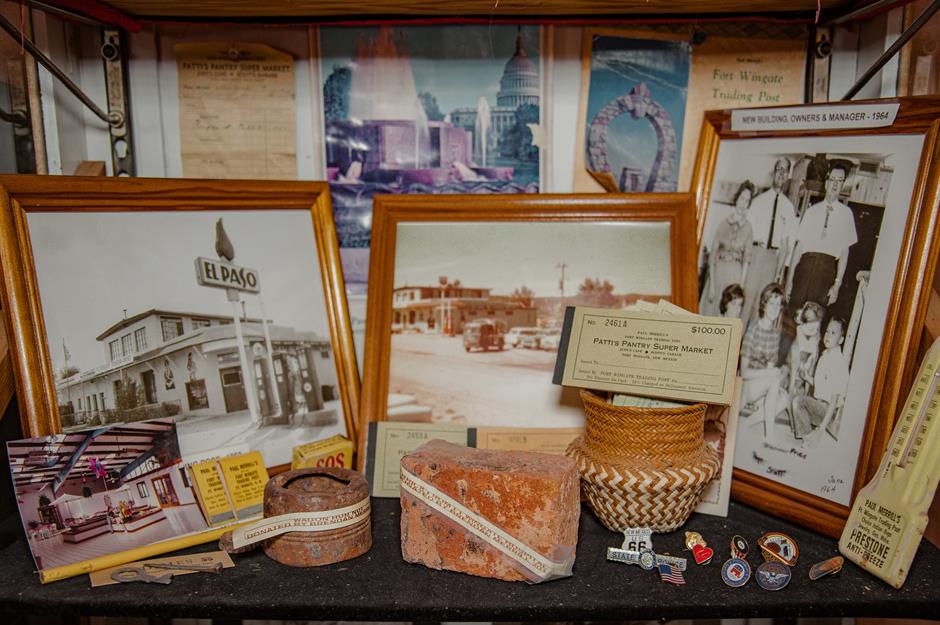 There are plenty of unique treasures dotted across the former military base, too. From old photographs to trinkets, these historically important objects all come included as part of the sale. Perhaps the new owner could establish a museum to document the town's storied past.

Reminders of the past 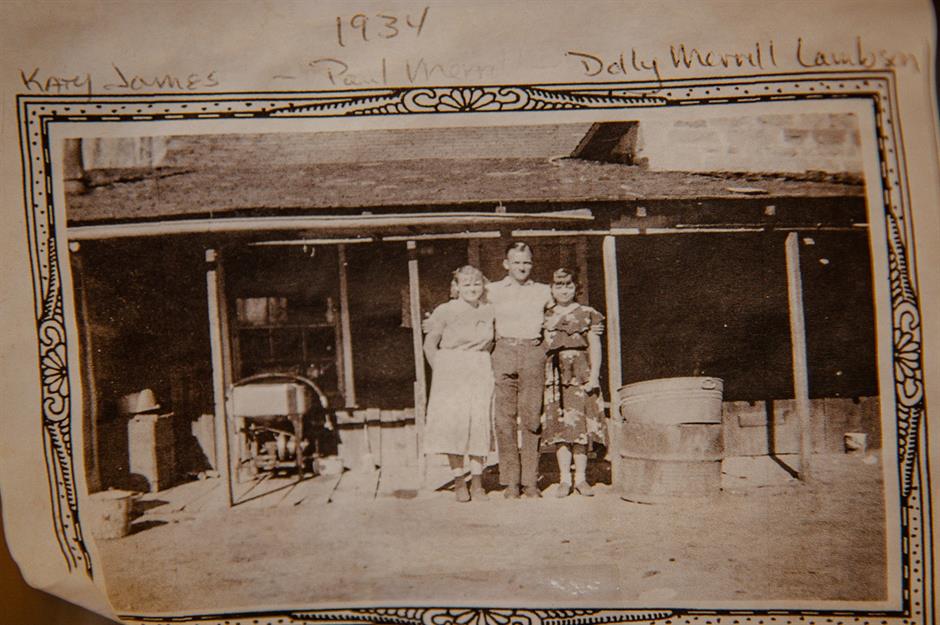 This photograph, dated 1934, shows a family outside the main store of the town. This business would have served the community of Fort Wingate and been a popular stop along Route 66 during the Second World War. 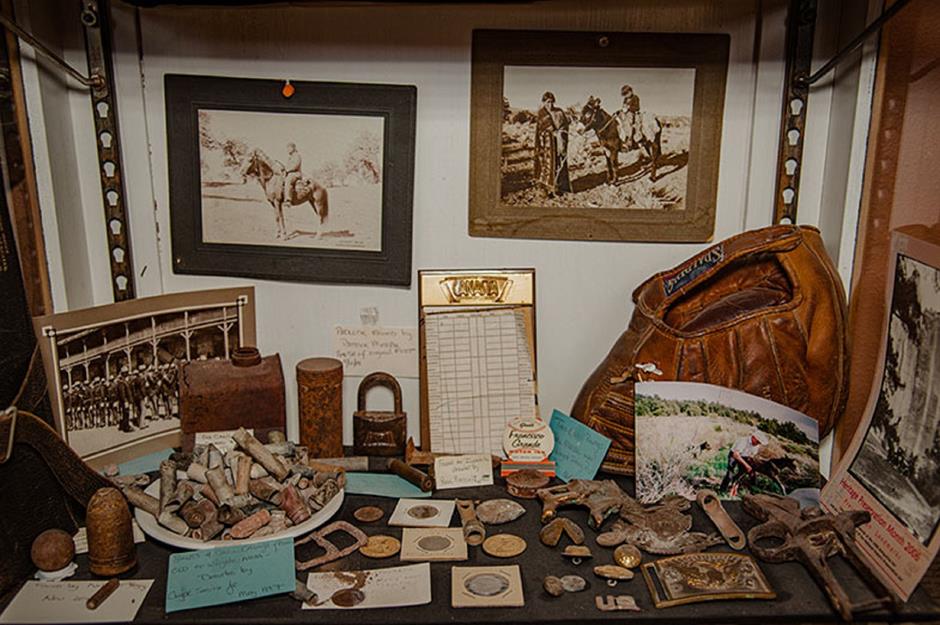 Here, you can see military artifacts and personal effects left behind when the military base was abandoned. From bullets to coins and an old baseball mitt, these items would be well worth preserving. In fact, since the town is now on the National Register of Historic Places, the new owner may have a responsibility to ensure these objects are protected. 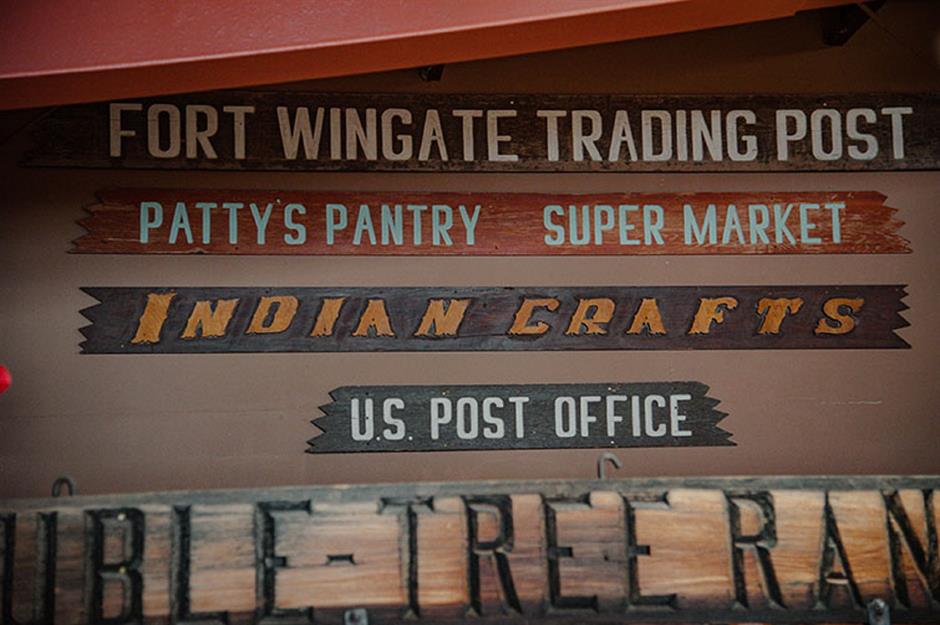 Whoever takes up ownership of this unique tiny town, we hope they'll preserve some of the site's more unusual historical elements, such as its old signage, furniture and vehicles, which can be found dotted across the acreage. 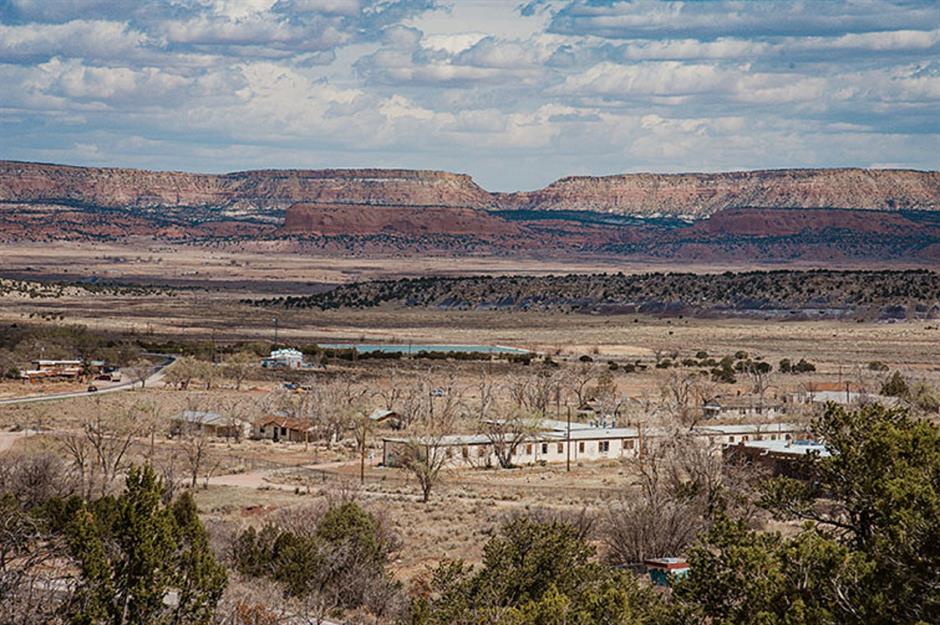 As well as all this land and history, the American town also comes complete with jaw-dropping scenery. If you've fallen in love with the history and beauty of this settlement, then it could soon be yours. All you need is some imagination and $11 million (£8.2m) in the bank. Sound achievable? Realty ONE Group has all the information you need.