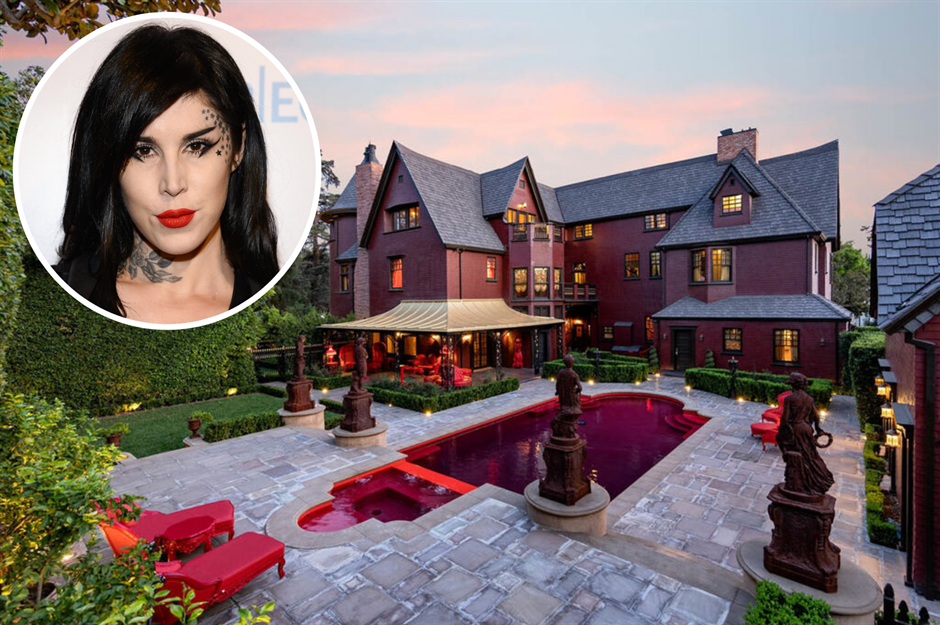 Famous tattoo artist, model and entrepreneur, Kat Von D is known for her unique sense of style, but her home truly captures her flair for the dramatic. In January 2022, she listed her historic Gothic mansion for a cool $15 million (£12.2m) but it's since received a dramatic price drop to $12.5 million (£10.1m). It also comes with one seriously cool feature – a blood-red swimming pool. Click or scroll on and let's take the full tour of this gorgeous, ghoulish mansion... 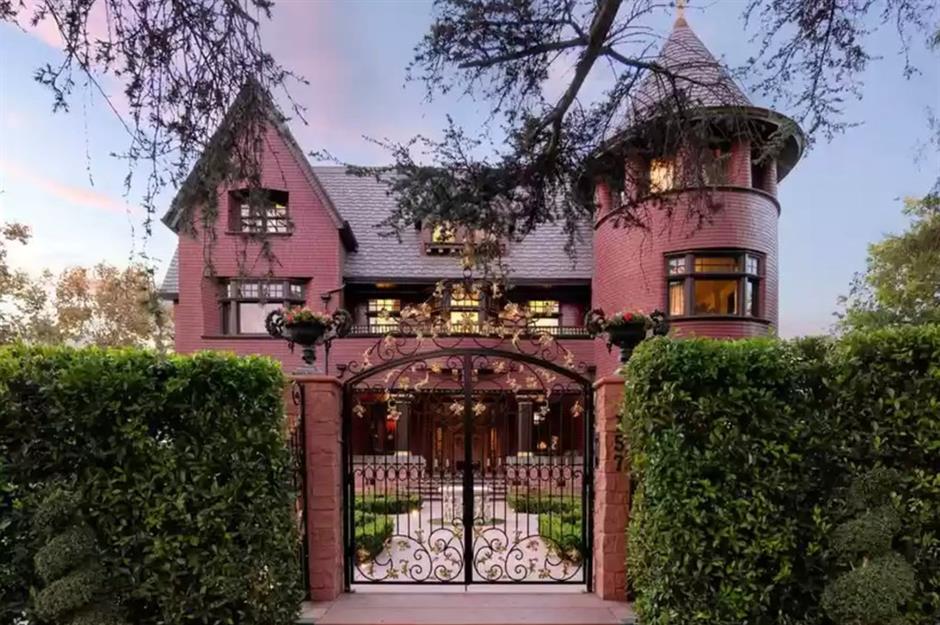 Katherine Von Drachenberg rose to fame in 2005, after starring on reality TV show, Miami Ink. Later, she was given her own spinoff, LA Ink, which followed her work at her personal studio, High Voltage Tattoo, in Hollywood. The artist then launched her own cosmetics company and even started a career in music, accumulating a reported fortune of $30 million (£22.2m). With her money, Von D bought this magnificent mansion in the Hancock Park neighbourhood of Los Angeles. 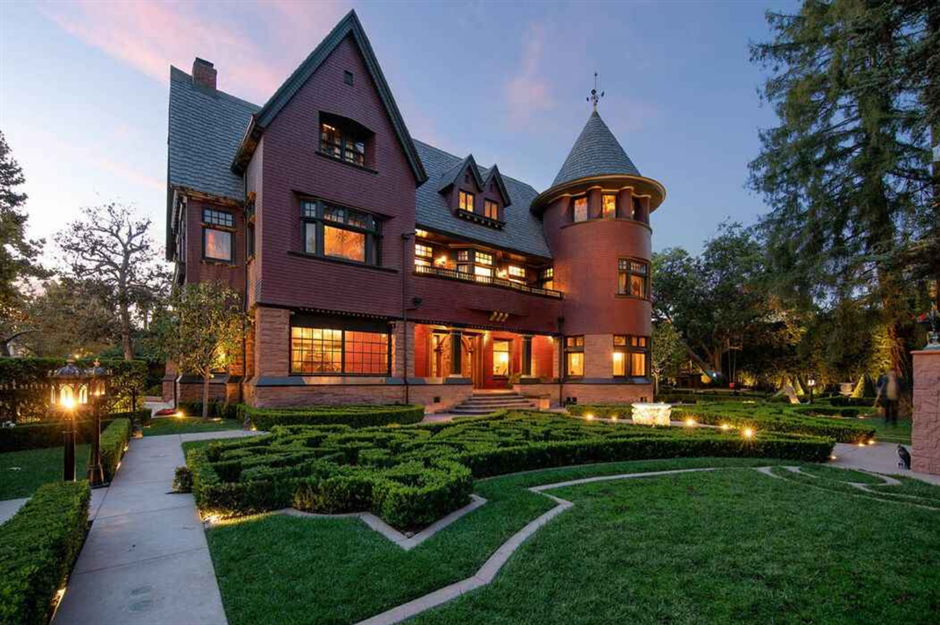 Von D bought the sprawling three-storey Victorian, complete with a towering turret, back in November 2016 for $6.5 million (£4.8m). Dating back to 1896, the grand Queen Anne property was commissioned by the American businessman Isaac Newton Van Nuys, but it hasn't always been located on its Windsor Square site. The beautiful home has a fascinating history and was actually moved to its current location in 1915, by Isaac's son, J. Benton Van Nuys. 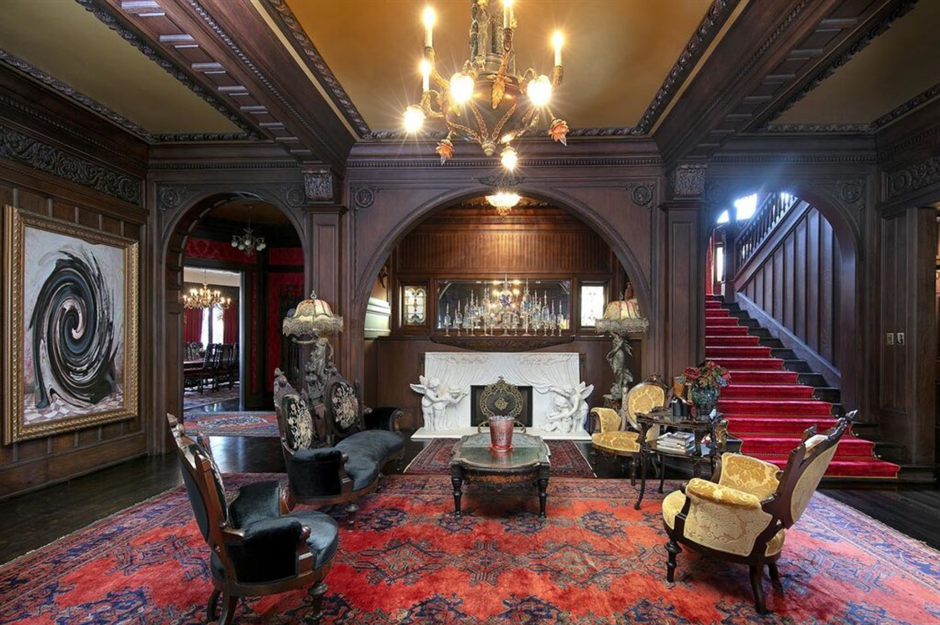 Once you head through the estate's black and gold gates, past the landscaped garden and through the home's decorative front doors, you'll find yourself inside a dark and dreamy interior that is truly befitting of the iconic tattoo artist. Spanning 12,565 square feet, it's overflowing with Gothic design elements and spooky décor. The Gothic Victoriana entrance salon offers guests the perfect welcome, preparing them for the treasures that lie further inside... 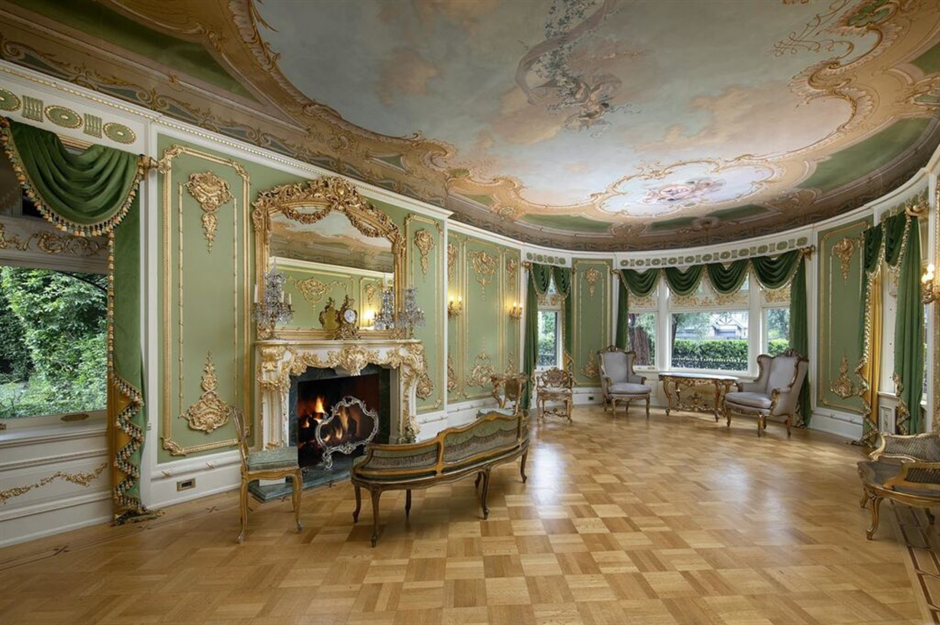 When Von D bought the property, it was pretty special – kitted out with hand-carved walls, stained-glass windows, mirrored fireplaces and chic hardwood floors. Yet design-wise, the house wasn't quite to the TV star's tastes, so she undertook a dramatic home transformation, which took a team six years to complete. Clearly no expense was spared, because every room is now elaborate and flawlessly finished, especially the ballroom. 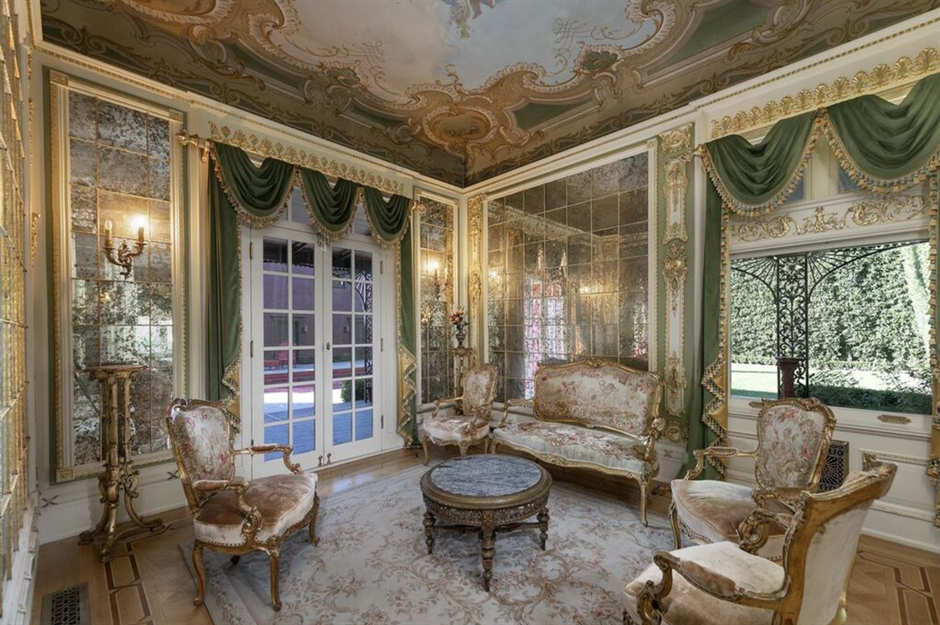 The breathtaking room boasts antique furnishings, a hand-painted statement ceiling, velvet drapery, gilded details and parquet flooring. As if plucked from the set of Bridgerton, the room also has a snug sitting area, complete with mirrored walls and French doors that open up to the garden. We imagine this would be the perfect spot to enjoy a cup of coffee, or perhaps a blood-red cocktail. Yet, remarkably, the space didn't always look like this... 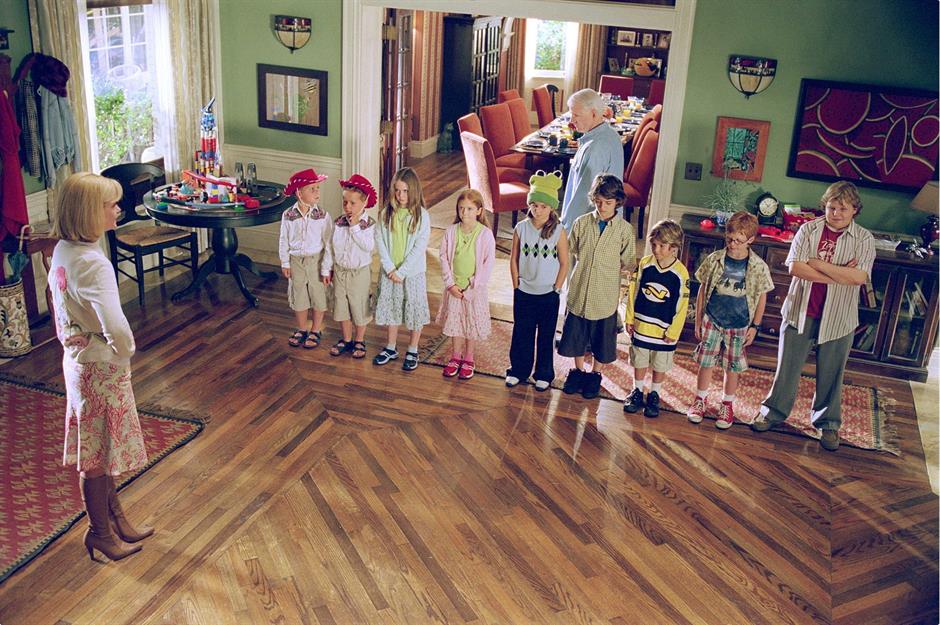 This movie still, from the 2003 family comedy, Cheaper by the Dozen, highlights just how much the mansion has changed since Von D snapped it up. The property was used as the set for the film, which starred Steve Martin and Hilary Duff, and at the time it was grand and light-filled, but nowhere near as quirky as it is today. Despite extensive remodeling works, Von D took inspiration from the home's history and was careful to be sensitive during the renovation works. 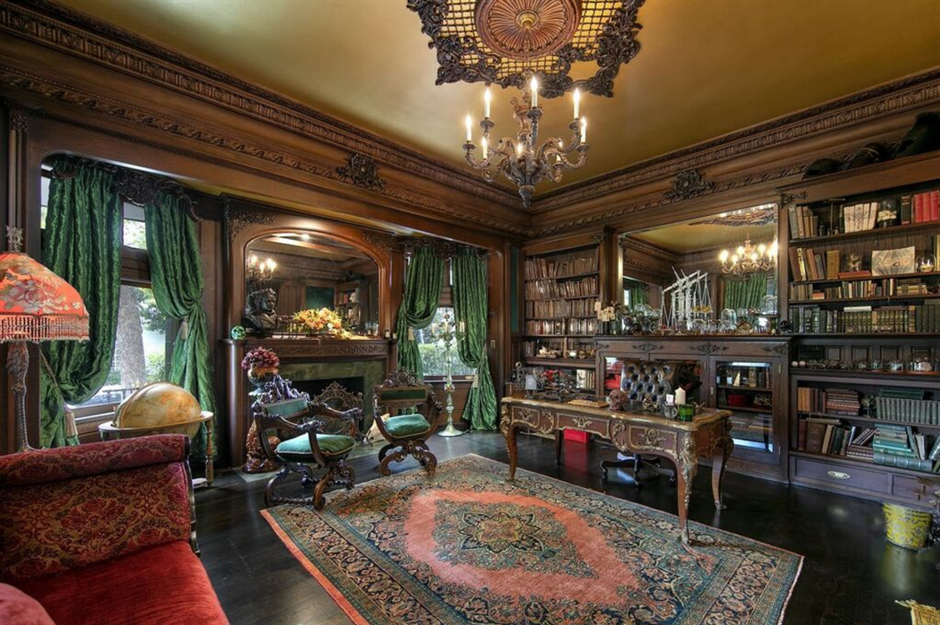 Her hard work is clear to see throughout the historic residence. The TV star retained the home's traditional floorplan, with the grand salon seamlessly flowing into a library and formal sitting room, updating the interior with hand-crafted elements in keeping with the home's heritage. There are endless living spaces for work, rest and play, and the panelled library would've made a great HQ for Von D's cosmetics company, KVD Beauty, which she sold to Kendo in January 2020. 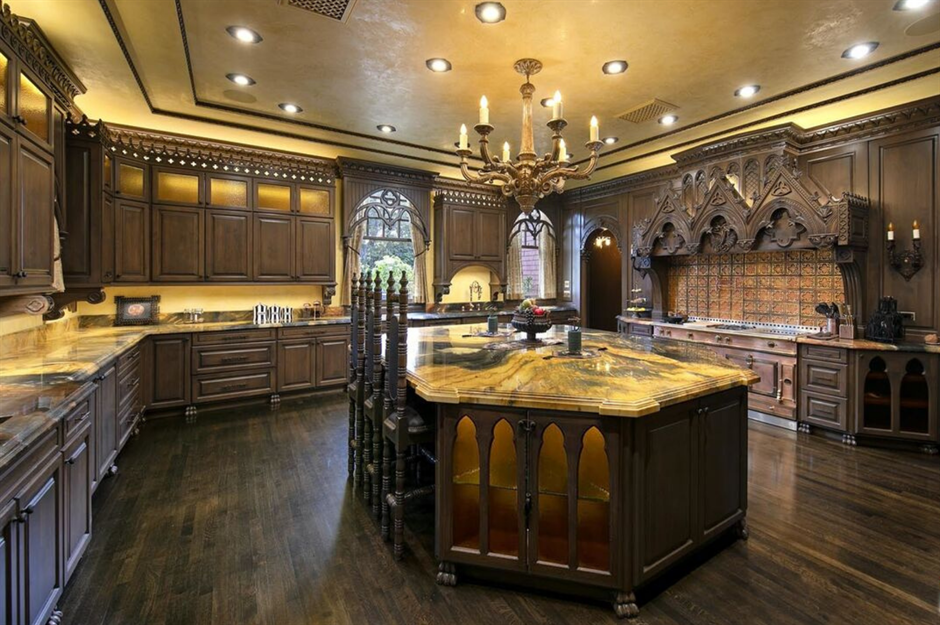 The dark, dramatic kitchen has been updated to fit with the rest of the house. Finished with an ornate stove surround, golden marble countertops, rich mahogany units and a butler's pantry, it's definitely got bags of Gothic appeal. Full of surprises, the space even boasts a hidden bar with hand-carved walls and a secret door that leads out to the garden. 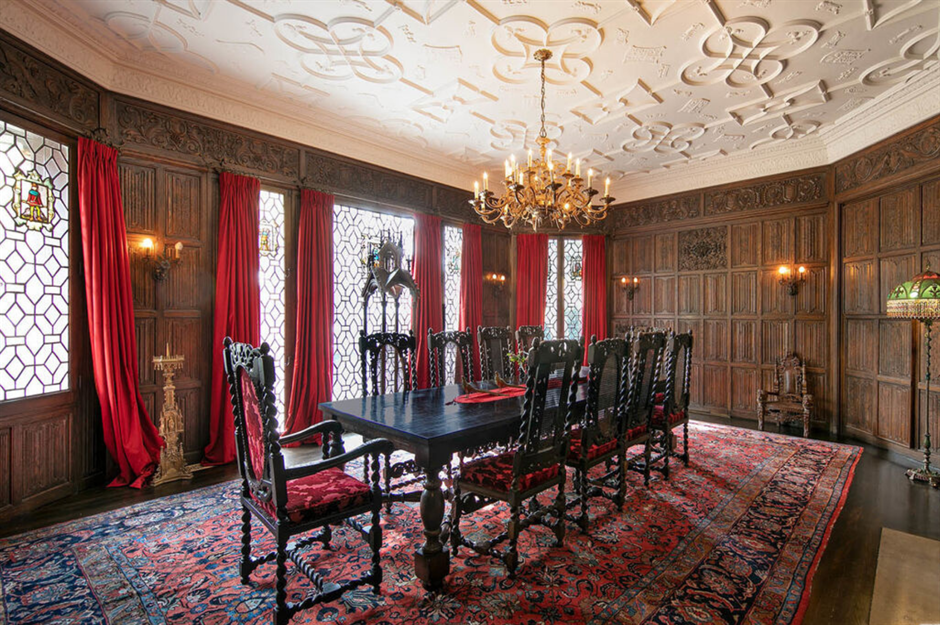 Every room in this real-life movie house is kitted out with original features and hand-crafted elements that artisans meticulously curated for Von D. From fireplaces to flooring, furnishings and light fixtures, no detail has been overlooked. This is really highlighted when you step into the dining room. With its wood-lined walls, decorative ceiling, stained-glass windows and crimson red details, it's the ultimate space for hosting. 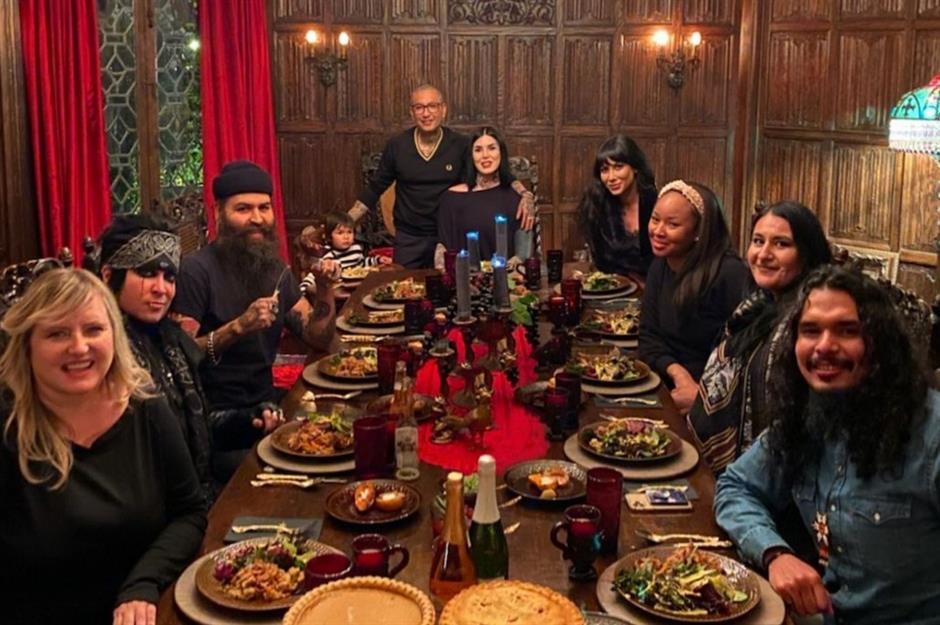 And, of course, that's exactly what Von D and her husband, Rafael Reyes, have been doing during their residency at the house. On Thanksgiving 2020, Von D took to Instagram to share this image of their celebration with family and friends. 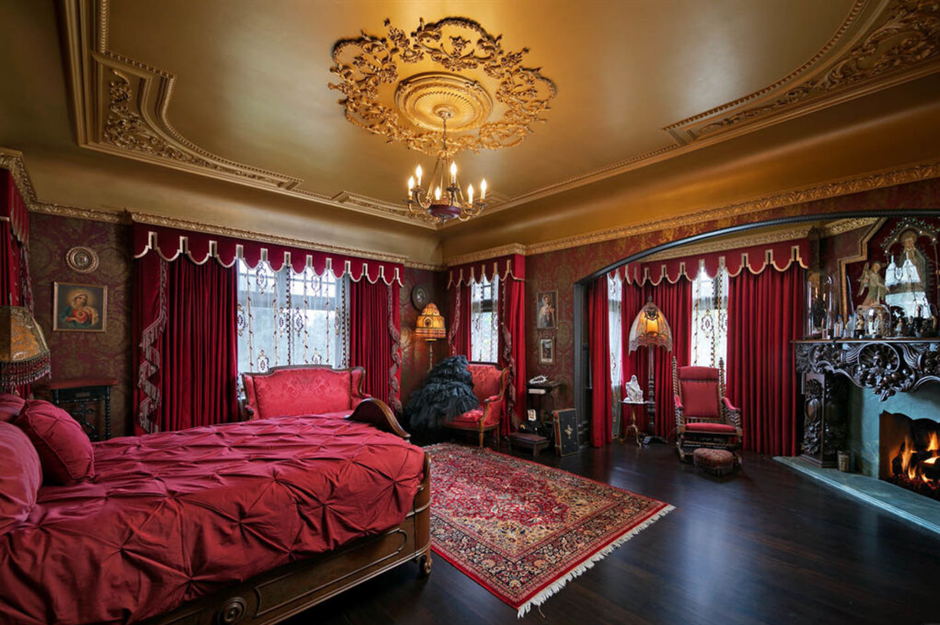 Head up the home's grand wood carved staircase and you'll find 11 impressive bedrooms and eight bathrooms, each with its own unique sense of style. The master suite is, of course, a dark and dreamy space with plenty of Gothic charm. From the blood-red upholstery to the golden ceiling and black fireplace, it's the ultimate Halloween-ready sanctuary. 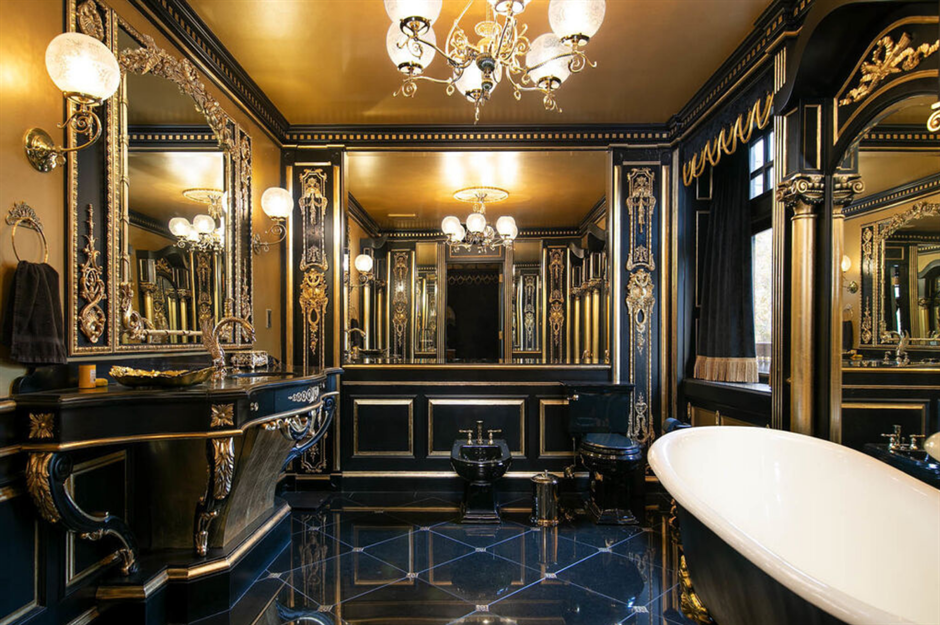 The room also benefits from a walk-in closet and a theatrical ensuite bathroom, finished with black and gold details, mirrored walls and a freestanding tub. We can't think of a cooler space for the queen of Gothic to relax and unwind! 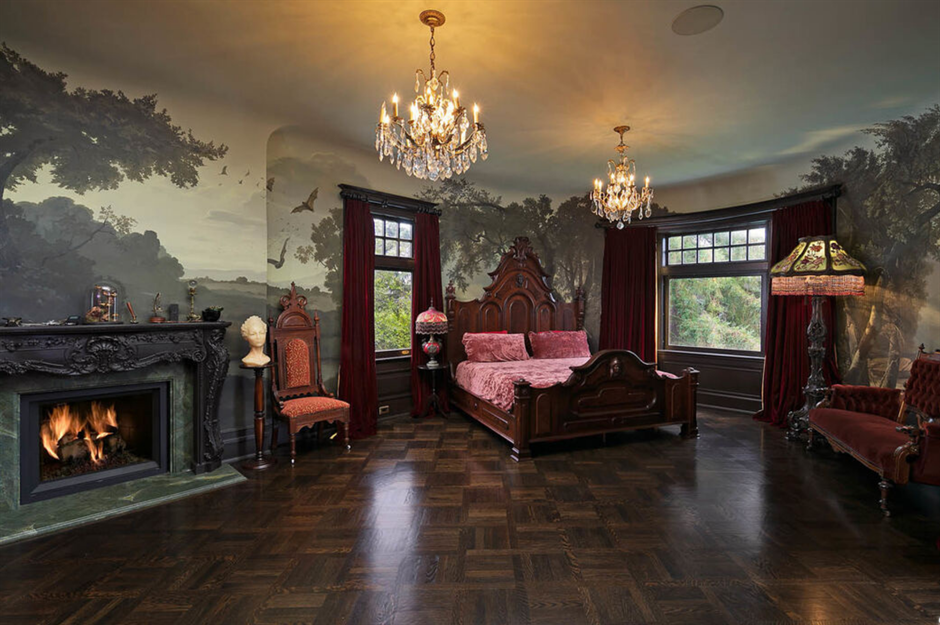 We wouldn't mind spending the night in one of the home's guest rooms, either. This enticing space features a sophisticated timber floor, a black fireplace, Victorian furnishings and a stunning wall mural that stretches up onto the ceiling. 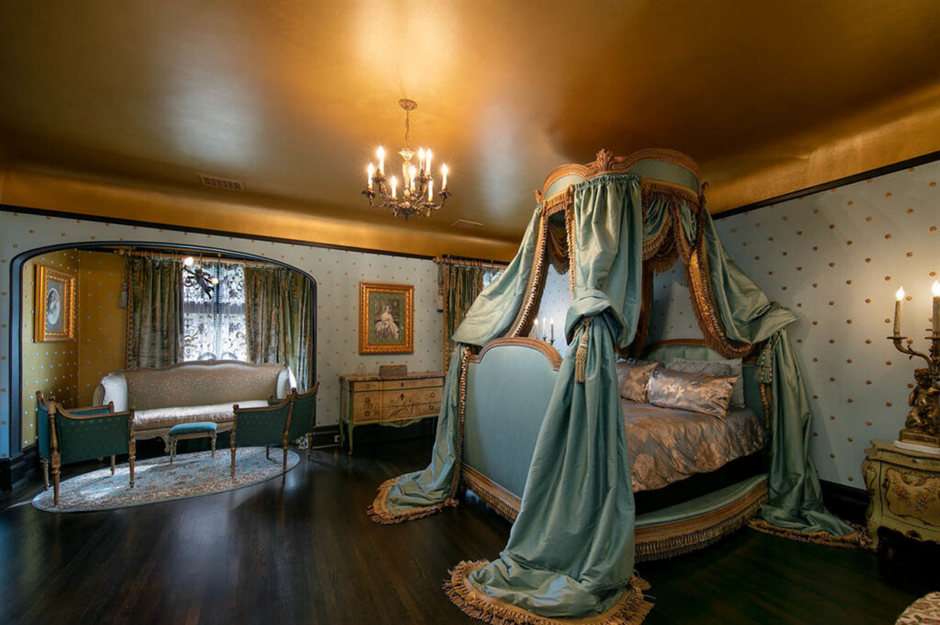 This incredible celebrity bedroom highlights Von D's passion for historical architecture and design. We adore its gilded ceiling, polka-dot wallpaper and elaborate fabric-draped bed, which appears plucked from the interior of an authentic royal palace. 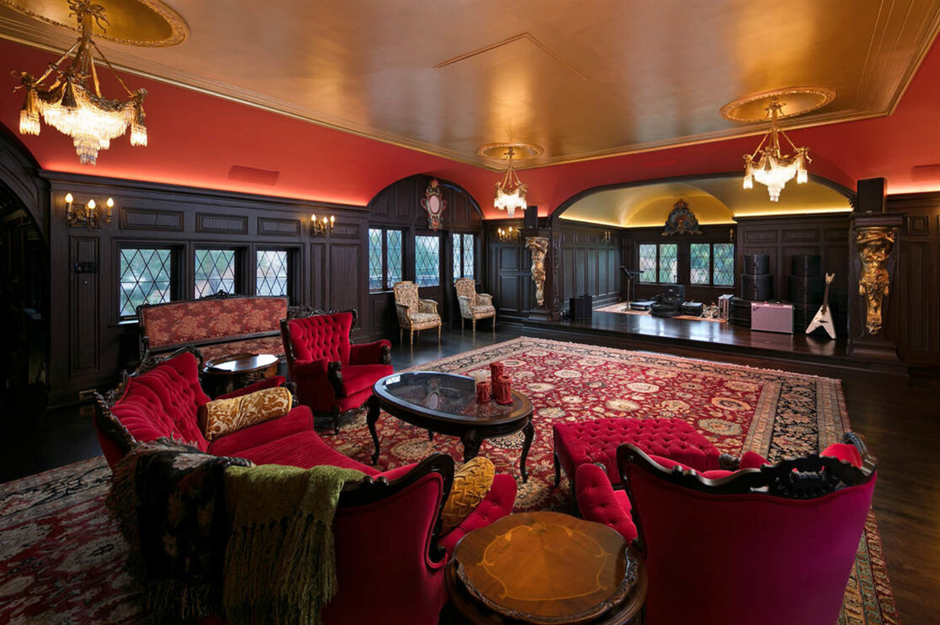 There's even an incredible attic that comes complete with a turreted side room, a bar and a stage – the perfect place for hosting VIP parties and intimate gigs. In recent years, Von D has been recording her own music, so perhaps this space was where she performed her songs in front of friends and family for the first time. In January 2021, Von D shared news via Instagram that she has filmed a documentary about the house, showcasing the renovation from start to finish. 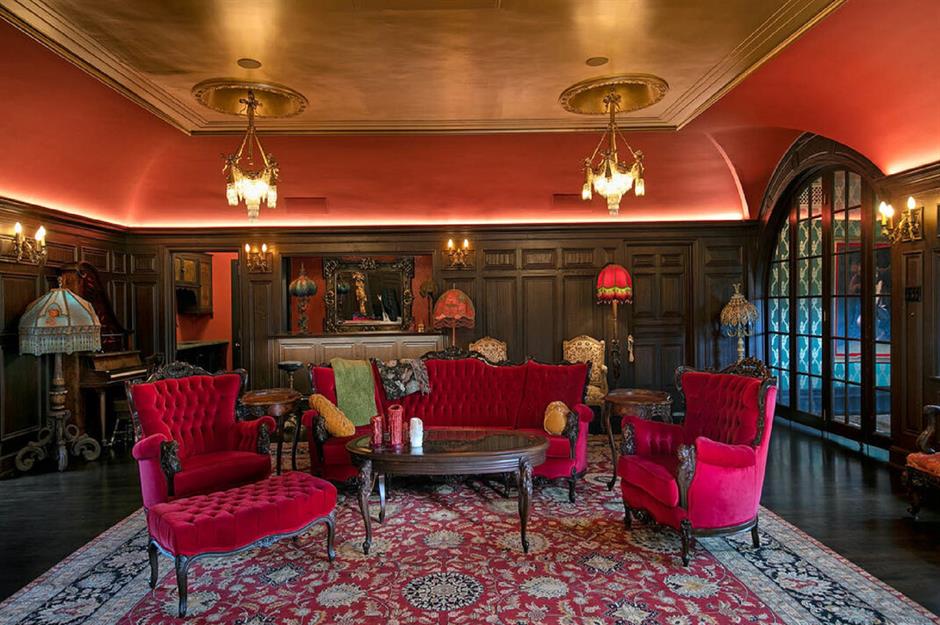 “Casa Von D has brought many amazing people together and I can’t wait to share the documentary with you," she told her 8.3 million followers. As well as “interviews with all the tradesmen and artisans that poured their hearts and souls into this project," the documentary will reveal the inspiration and historical references that influenced her designs. But despite how stunning and unique the property's interior is, it's really all about what's going on outside... 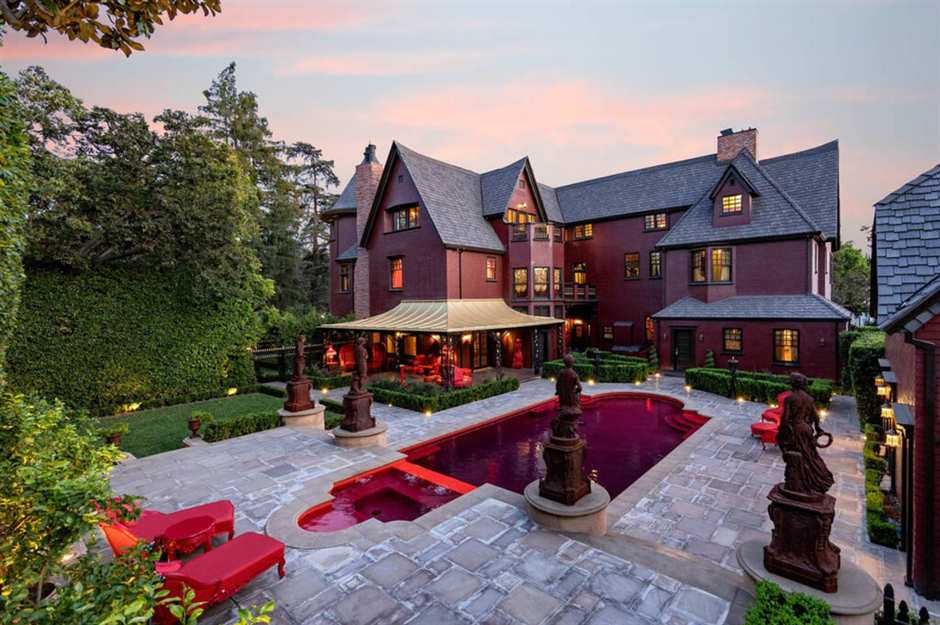 Step into the wow-factor backyard and you'll find one seriously cool feature – a dramatic, blood-red swimming pool and spa that perfectly match the deep crimson hue of the mansion's painted façade. When Von D bought the pad, the exterior was all-cream, but we think that this look is much more befitting. 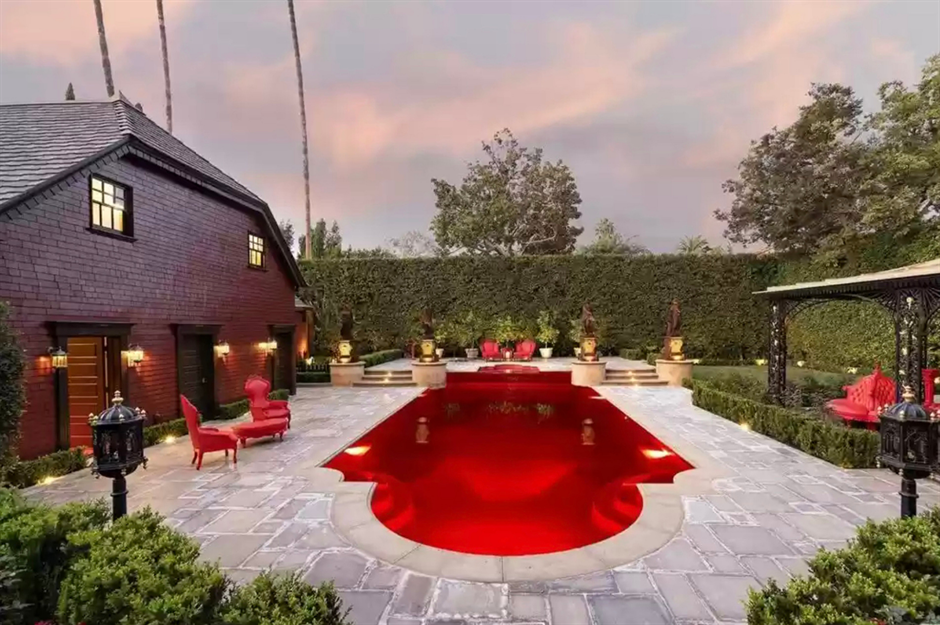 Far from being a real estate gimmick used to attract attention and market the property, it's clear from Von D's Instagram that the blood-red pool is a permanent fixture of the spooky house. As well as the statement pool, the garden is also home to a two-bedroom carriage house, which sits atop a large garage with its own car turntable. 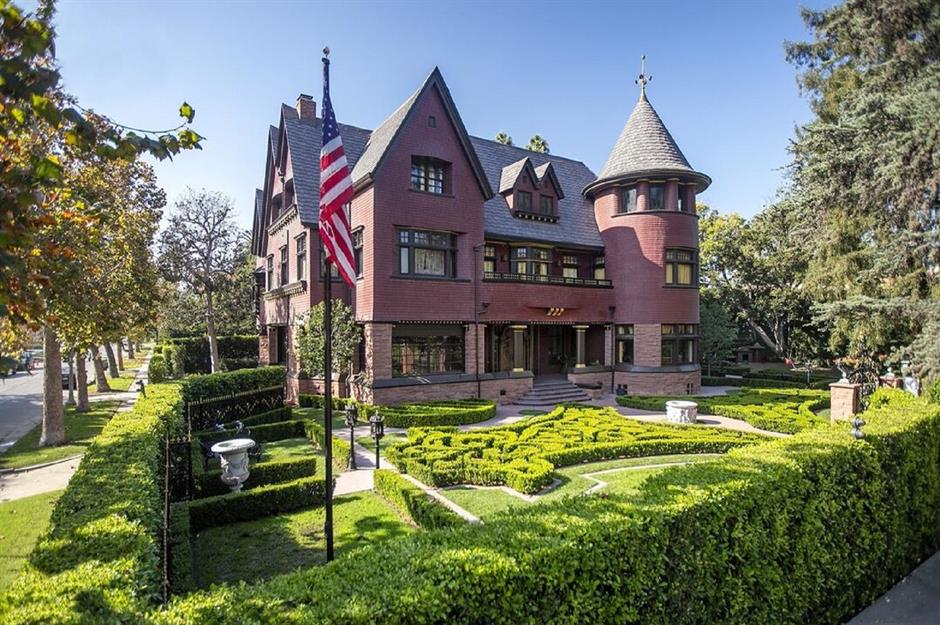 The 26,966-square-foot grounds also boast perfectly manicured hedgerows, ornate statues and mood lighting for all occasions. There are plenty of places for sunbathing, dining and entertaining, too. Currently on the market with The Sher Group for $12.5 million (£10.1m), this jaw-dropping mansion could soon be yours. But what made Von D decide to part ways with such a stunning home, especially after putting so much work into restoring it? 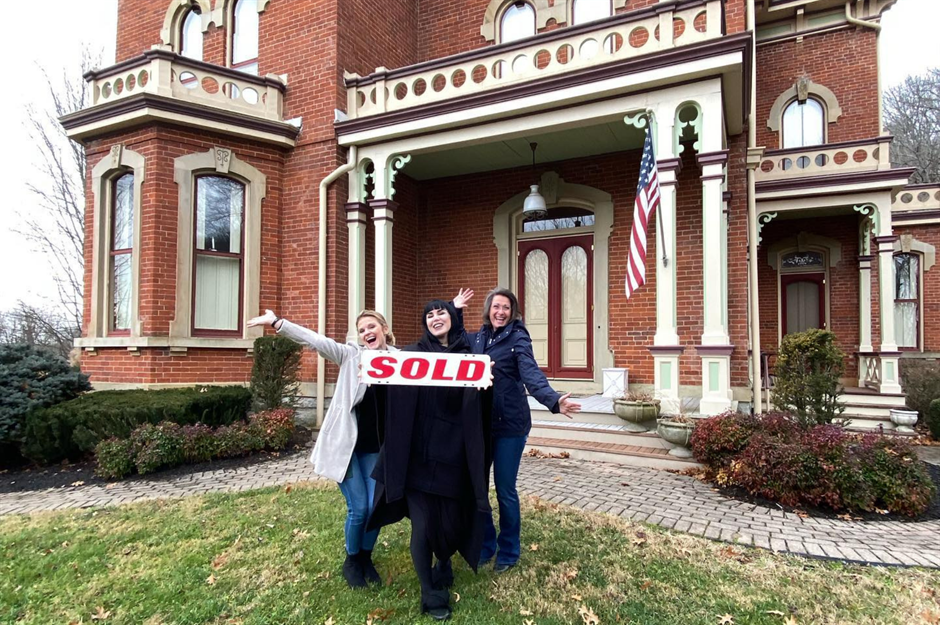 Well, the tattoo artist, her husband, and their child, Leafar, have relocated from LA to the town of Vevay in Indiana. Von D announced the move on her Instagram. The couple purchased a Victorian mansion there that they are currently restoring. Around the time she picked up the Indiana pad, Von D also placed her 1920s Spanish-style home in the Hollywood Hills on the market for $3.4 million. The updated 1920s hacienda reportedly sold for $2.5 million. We don't know about you, but we can't wait to see what they do with the new place – watch this space!