The spooky stories behind 25 abandoned cabins 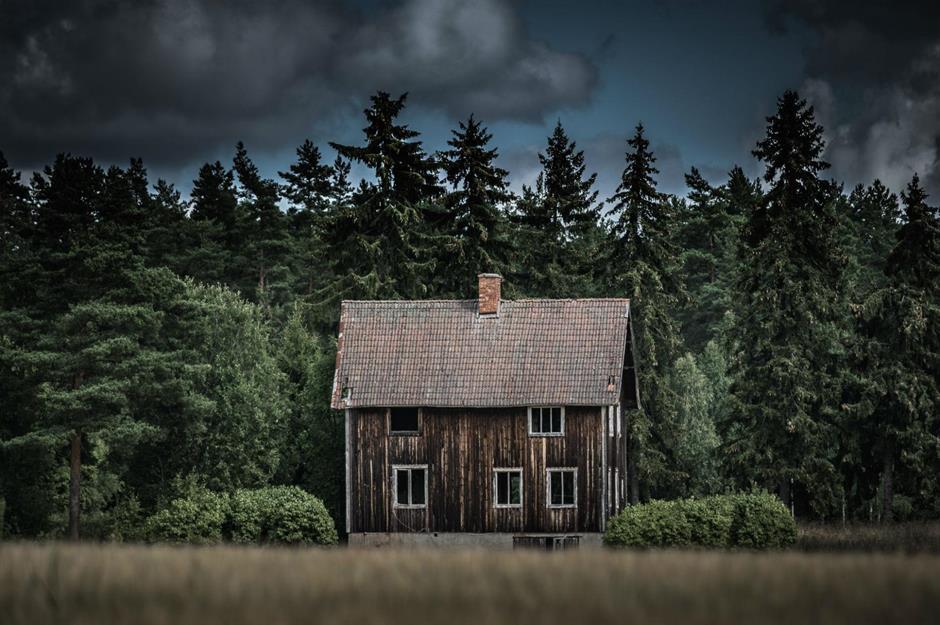 Magnus Binnerstam / Shutterstock
They might be pocket-sized but there's nothing cute about these derelict tiny houses. The perfect setting for ghostly happenings, these cabins are filled with spine-tingling secrets and tales of yesteryear. From deserted mining ghost towns to crumbling cottages void of life, discover the tales of hardship and woe behind this spooky shacks... 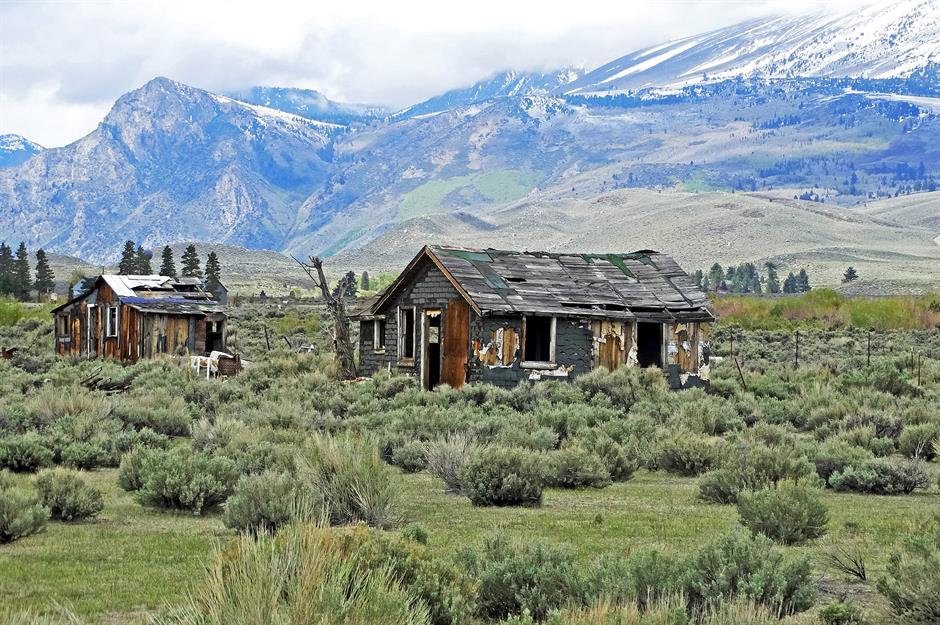 Abandoned and long forgotten, this deserted homestead in Eastern Sierra, California has an eerie feel about it. What once would have been the perfect rural cabin for getting away from it all is now dilapidated, with forlorn buildings that have been taken over by nature. 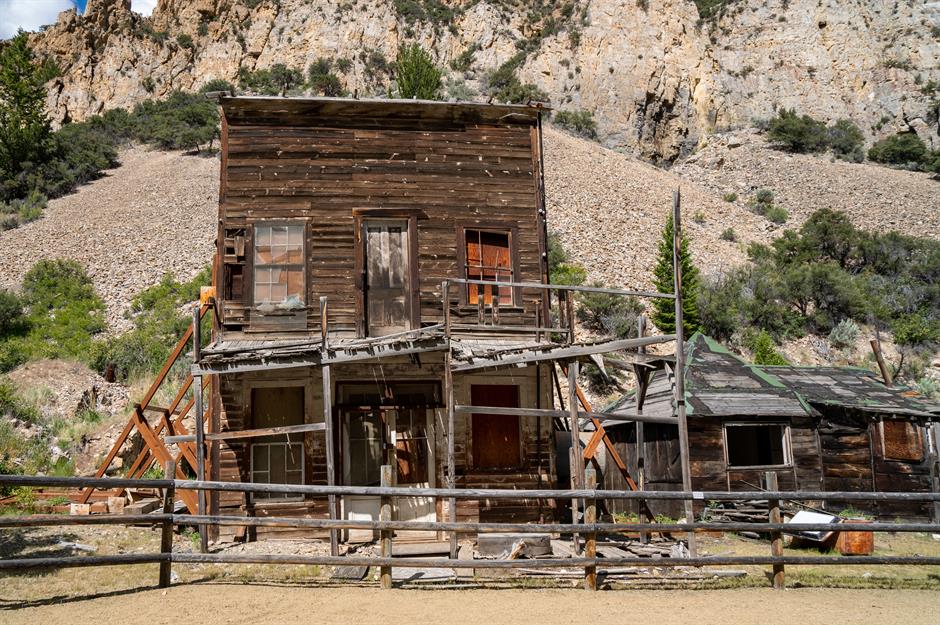 When a rich silver vein was discovered there in the early 1870s, the town of Bayhorse in Idaho became a booming hotspot. However, when the silver started to run out in 1915, the mine was shut down. With its prime source of work stripped away, the town was completely abandoned. The buildings, including this rickety wooden home, became derelict and rundown. 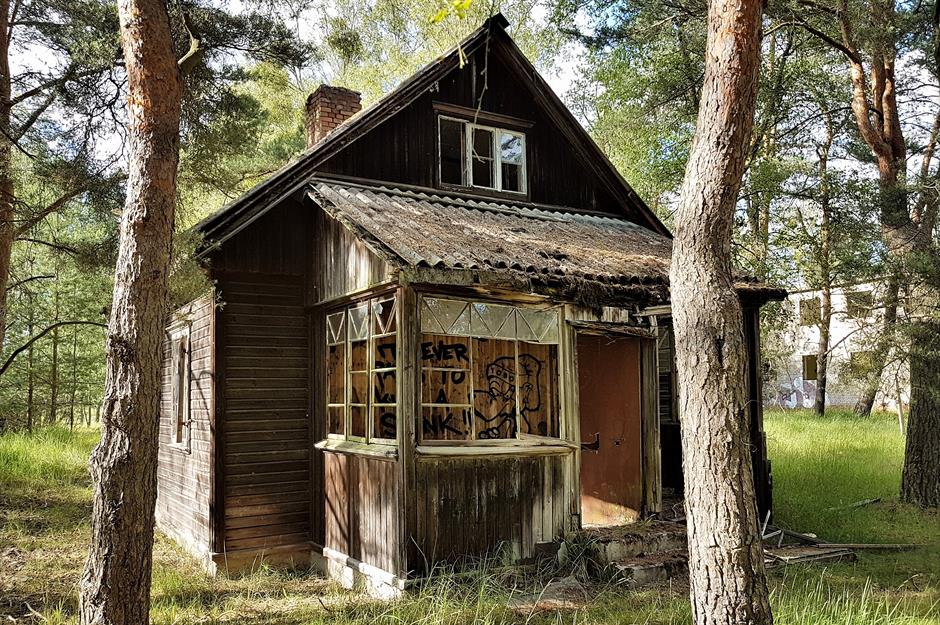 Rolf Dietrich Brecher / Flickr (CC BY 2.0)
Hidden away in the town of Vogelsang in Germany, this haunting cabin has a spooky history. After the Second World War, the district was used as a military base for the Soviet armed forces until 1994, when it was left deserted. This cabin, with graffiti in the window and a broken door, is a distant memory of what once was. 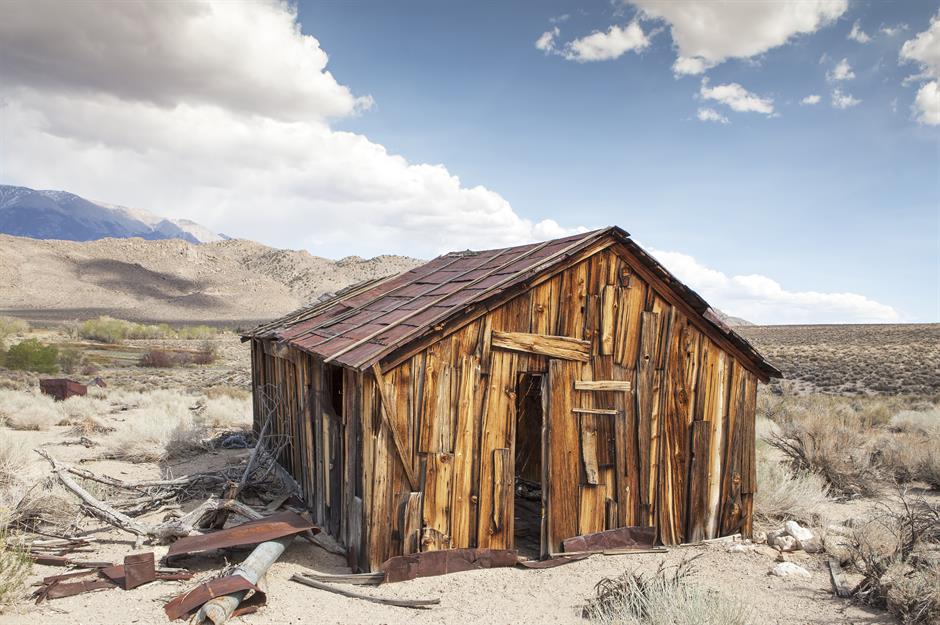 This abandoned miner's cabin sits in the eerie ghost town of Benton Hot Springs in California. The town produced gold from 1862 to 1889, at which point it was deserted. The locale has a creepy history; there is a rumour that the famous gold prospector William Bodey's partner, E.S Taylor, was killed in the village by a band of looters. 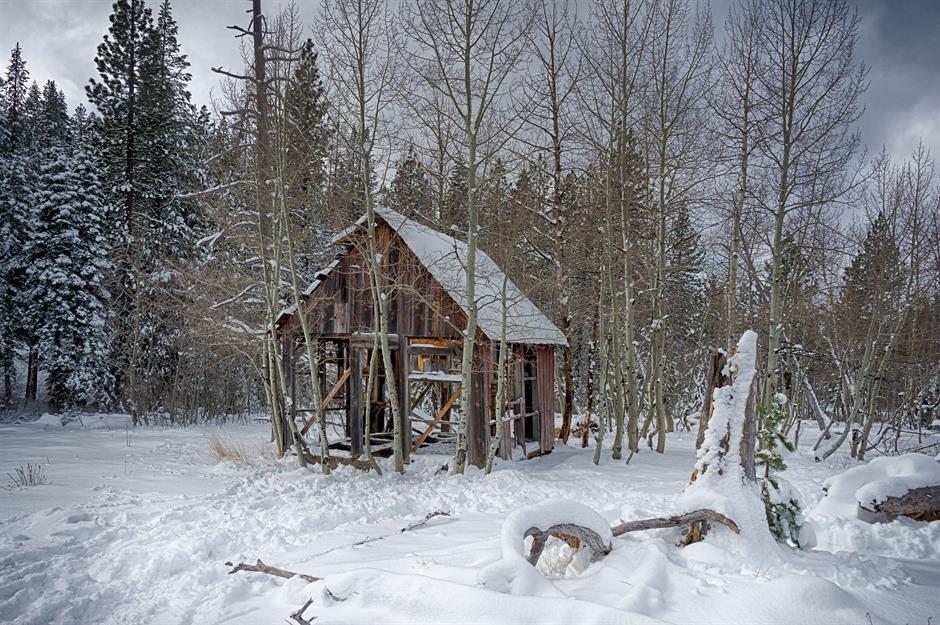 AMaleki / Flickr (CC BY-NC 2.0)
Surrounded by snow and taken over by the elements, this empty and decaying shack is located in Lake Tahoe, on the Nevada side of the Sierra Nevada Mountains. What would have once been the perfect holiday home is now a rotting frame that has become uninhabitable. We wonder who stayed here when it was in its heyday? 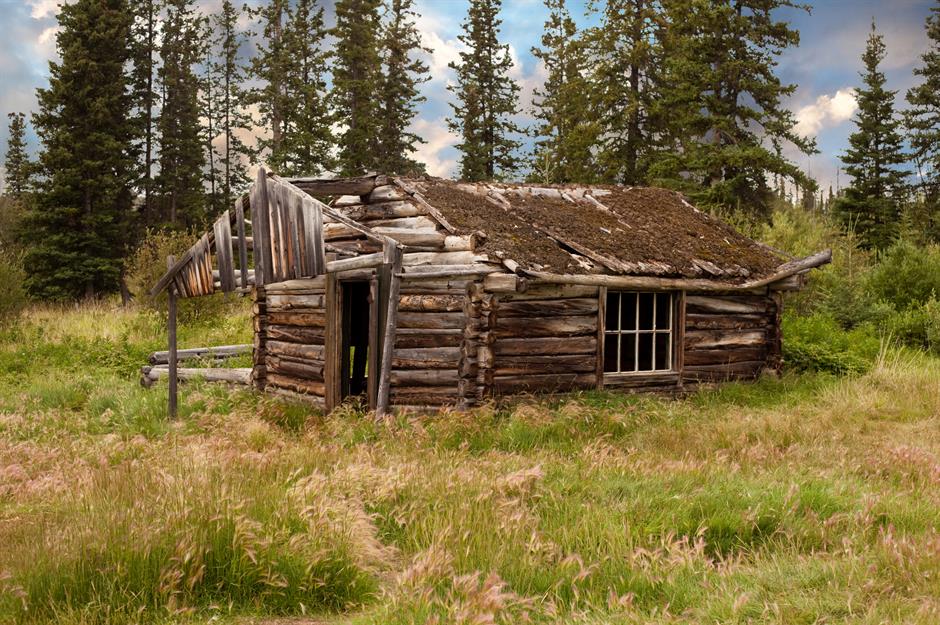 Pi-Lens / Shutterstock
This dilapidated cabin is all that's left of an abandoned gold rush village at the mouth of the Yukon River in Canada. The once-homely log cabin was constructed in 1899 but by 1919, it's thought that the entirety of Little Salmon Village was tragically wiped out by an influenza epidemic. 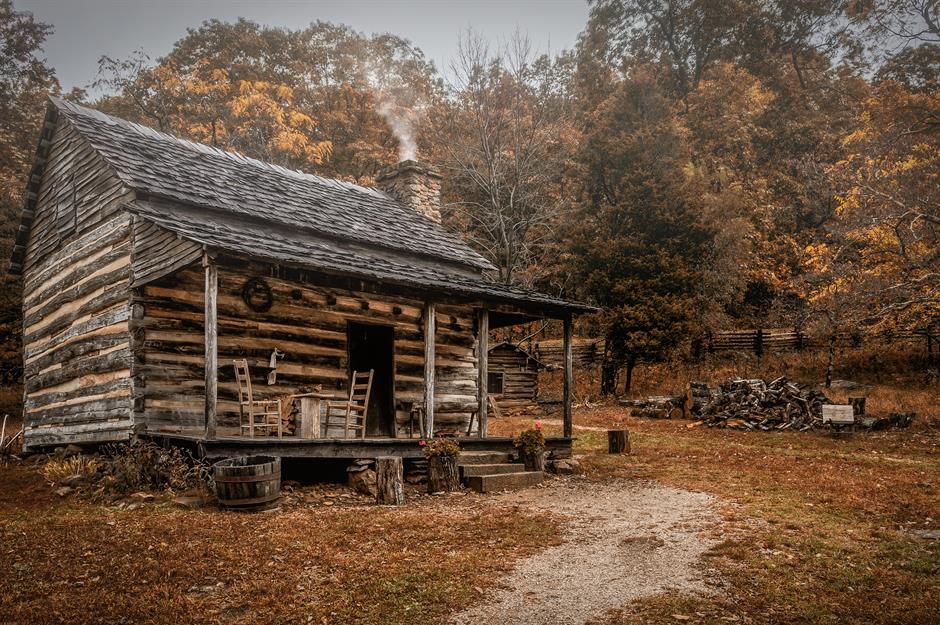 Hidden away high up in the Appalachian Mountains, this rustic hut with two chairs stationed outside gives the eerie feeling it has not long been left by its previous occupants. With a crumbling porch, the shack has seen better days but the pile of firewood suggests it was once well-cared for and a cosy place to spend a night. 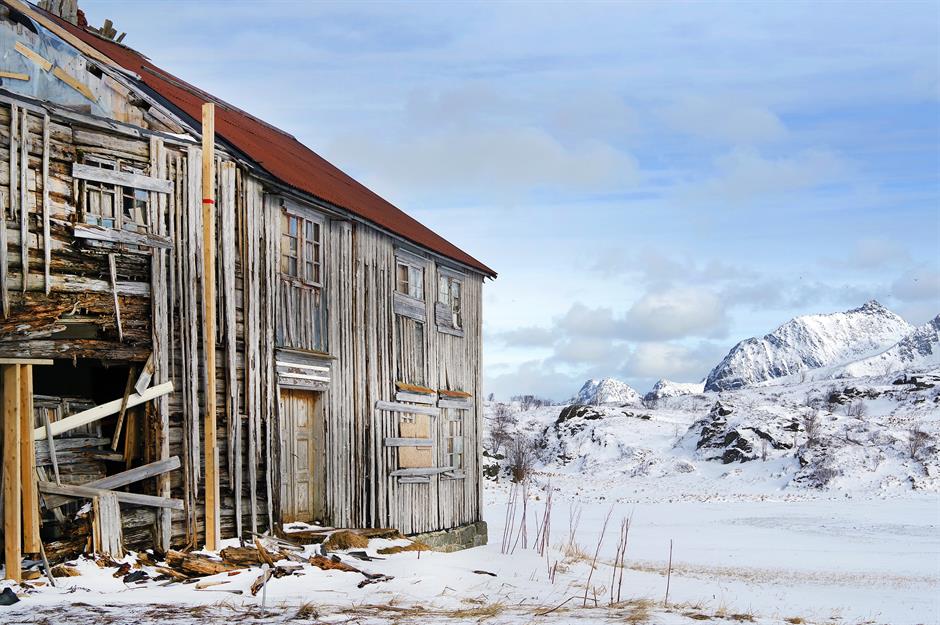 Sitting on a remote island in the Lofoten archipelago in Norway is this empty fisherman's hut. Between 1800 and 1950, fishing was an especially dangerous business here, and the names of 147 men who perished at sea in this period are still recorded in the local church. While some of the local villages were left abandoned in the 1970s, many have recently been repopulated and are thriving hotspots once more. 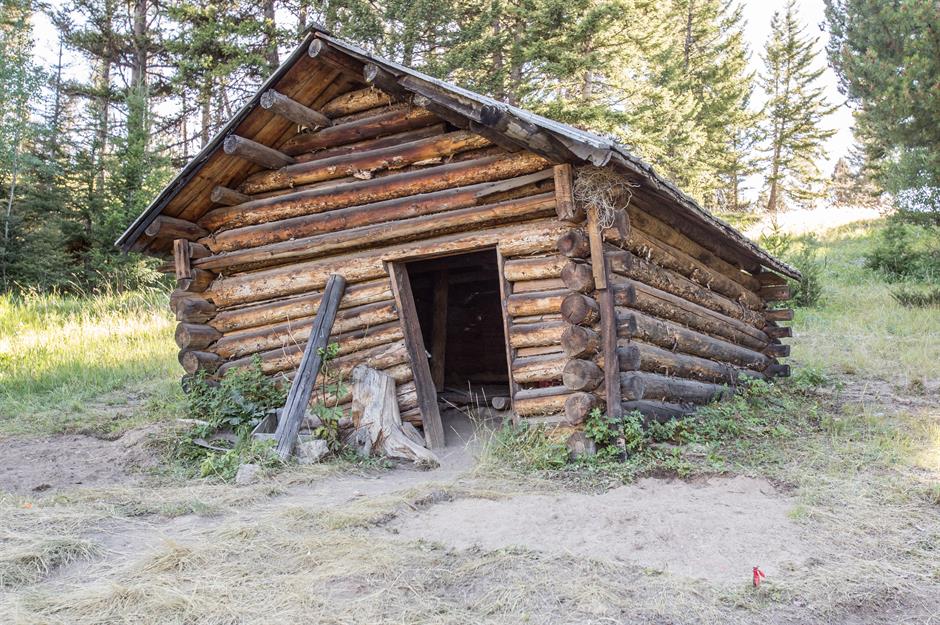 MISHELLA / Shutterstock
Another mining cabin that has seen better days is this unstable structure in the abandoned village of Garnet in Montana, USA. The spooky leaning hut is all that remains of the early 19th-century town that was once home to 1,000 people. 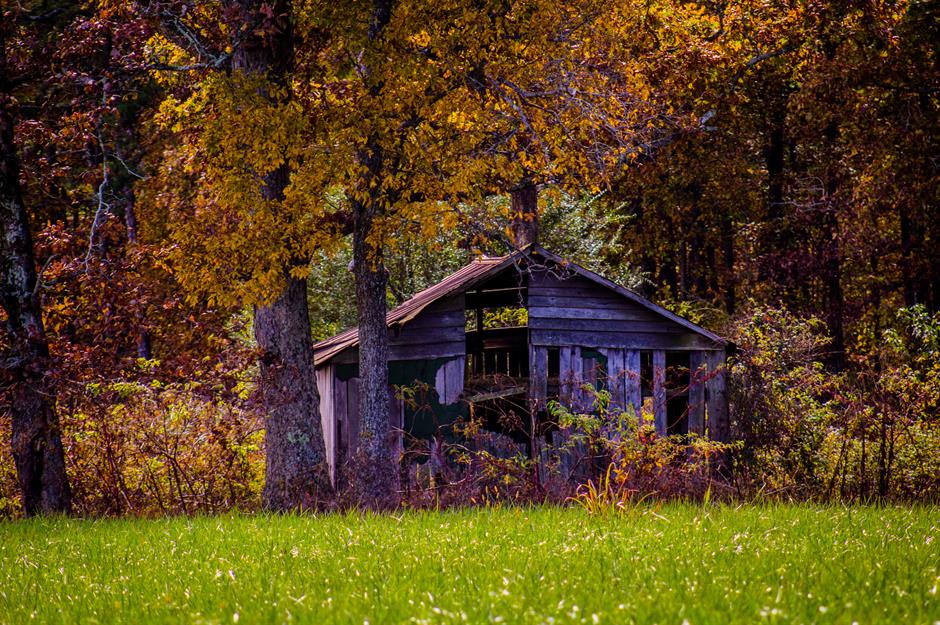 Hidden away in beautiful woodland, this rundown shack has seen better days. Located in the mountainous area of Cloudland, Georgia, the wooden hut is missing most of its facade and is open to the elements, giving it a creepy atmosphere. 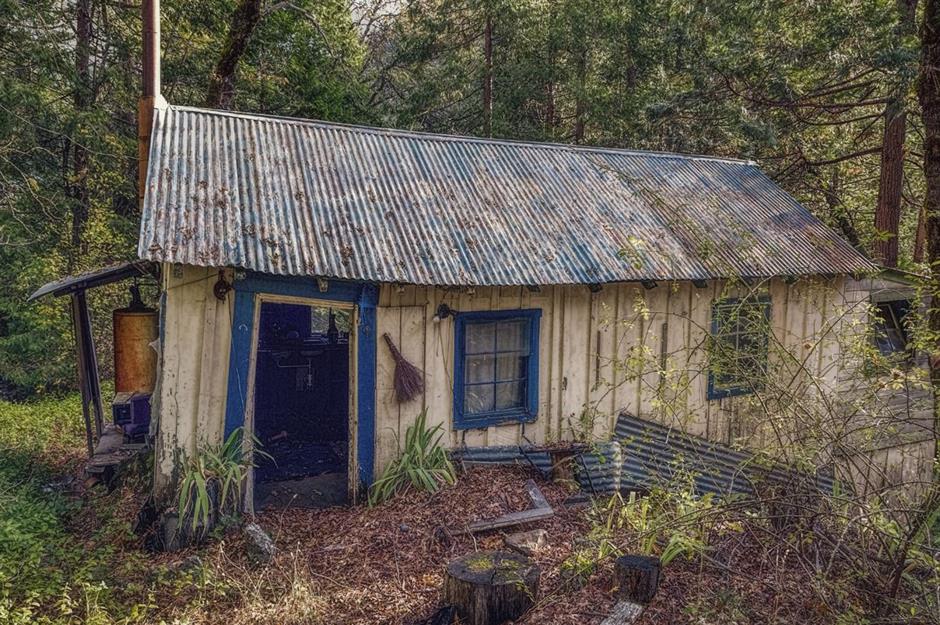 What was once a quaint, chocolate-box cottage is now a crumbling relic, left with a missing door and broken windows. The interior is just as eerie, with cups still hanging on their hooks and even a half-empty bottle of wine on the side. Outside, there's a sign identifying the house as James's Place. But what happened to James? 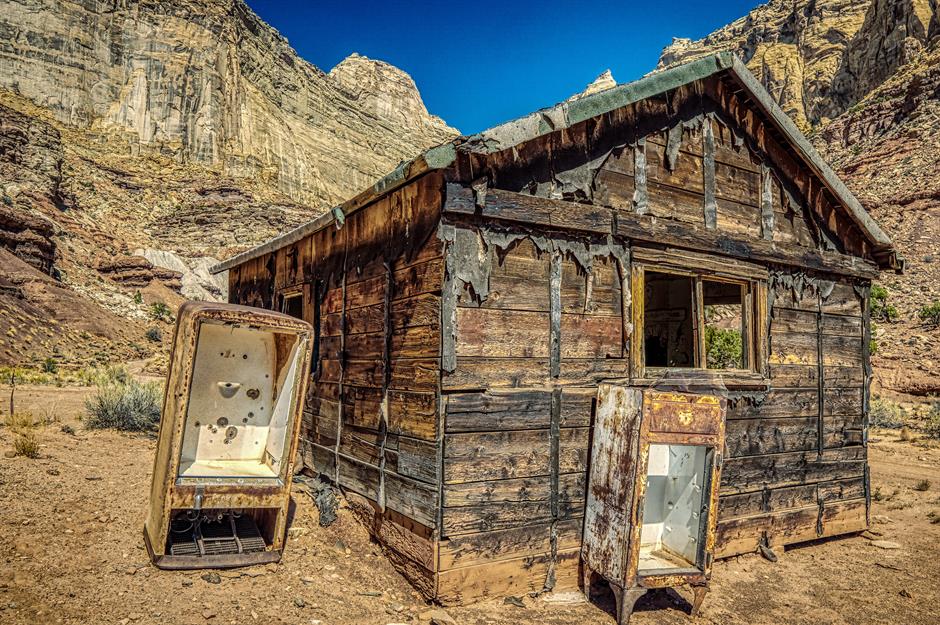 David S Baraloto / Shutterstock
Part of a small temporary community of shacks and trailers that used to house miners, this cabin has been left open to the elements. Located in Utah and surrounded by rugged shrublands and mountains, rusted, bullet-riddled furniture has been discarded outside the cabin, including a fridge. Could this have been the scene of a shoot-out? 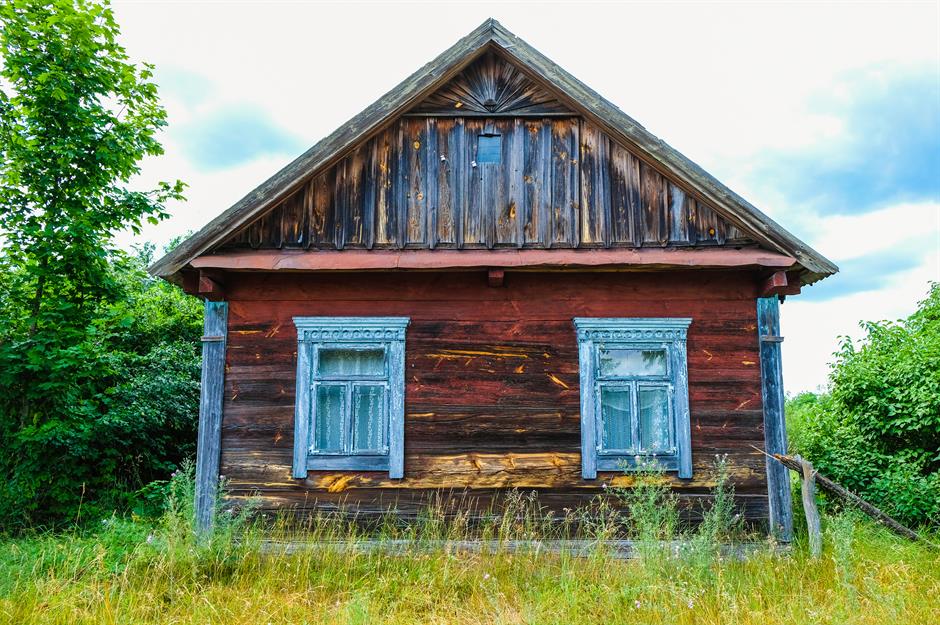 This old wooden house sits in the small settlement of Svalovychi in Ukraine. A place where time has stood still, there are just 16 elderly residents left, with much of the village having been taken over by nature, including this abandoned dwelling. 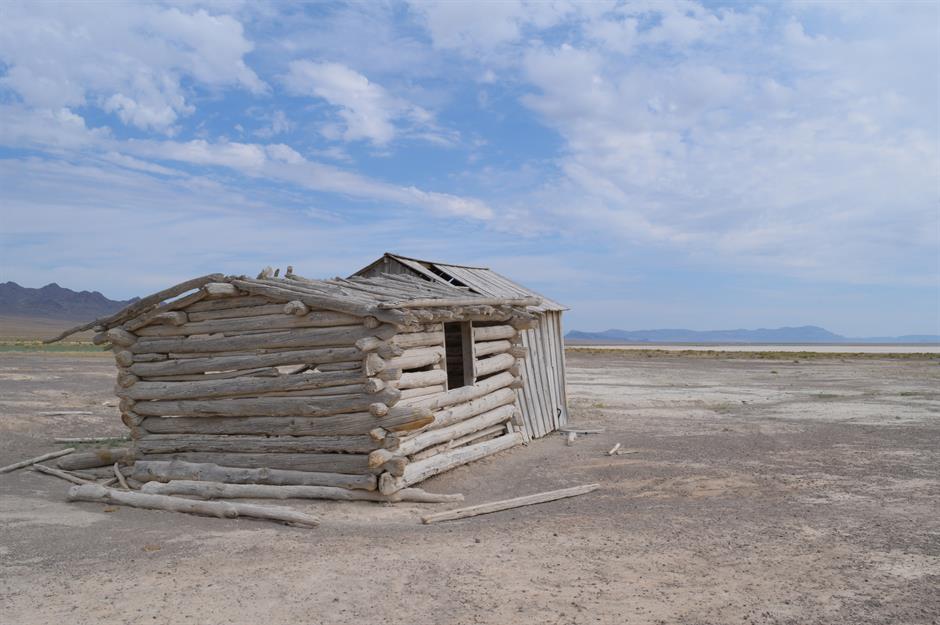 The Bonneville Salt Flats in Utah have a history steeped in spooky stories and ghost tales. A hub for speed fanatics, numerous racers have died trying to break the land speed record on the salt plains since the 1910s, while the local police have also reported finding many murder victims dumped there over the years. It's no wonder that this cabin was left to the elements... 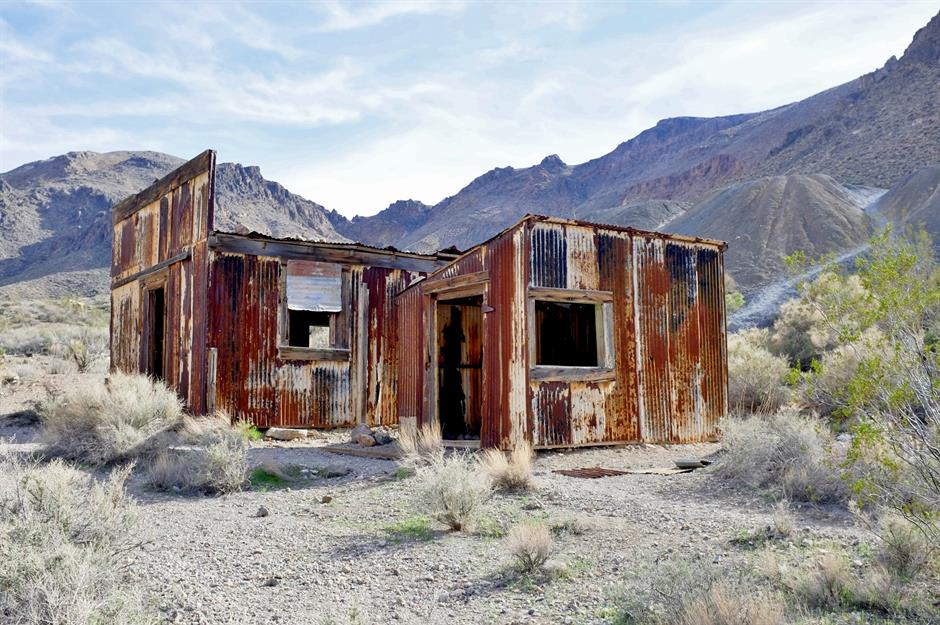 Once a thriving mining town in Inyo County, California, Leadfield is a scary ghost town. The area boomed in 1926 after a lead find, luring hundreds of people into the area. By 1927, the supply had dried up and the town quickly dwindled. Today, just a few buildings are left standing among the ruins. 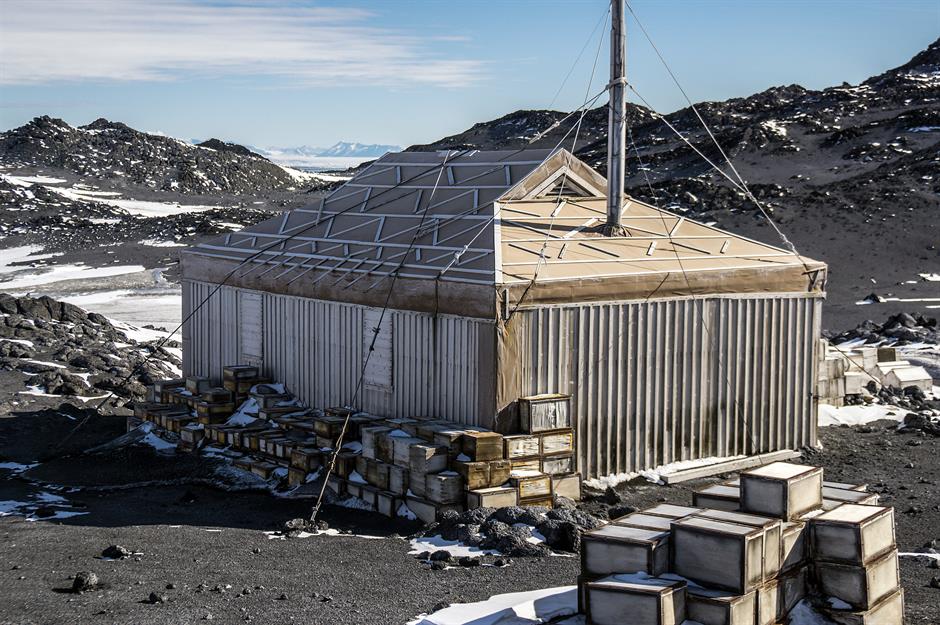 Once belonging to explorer Ernest Shackleton, who used it as a base for his unsuccessful attempt to reach the South Pole, this hut in Cape Royds, Antarctica, was left abandoned until its restoration in 2004. Now a museum, it's fully equipped with authentic food and even has the jackets of Shackleton and his men still hanging on hooks. In 2010, workers found two crates of whiskey which Shackleton had preserved under the ice. 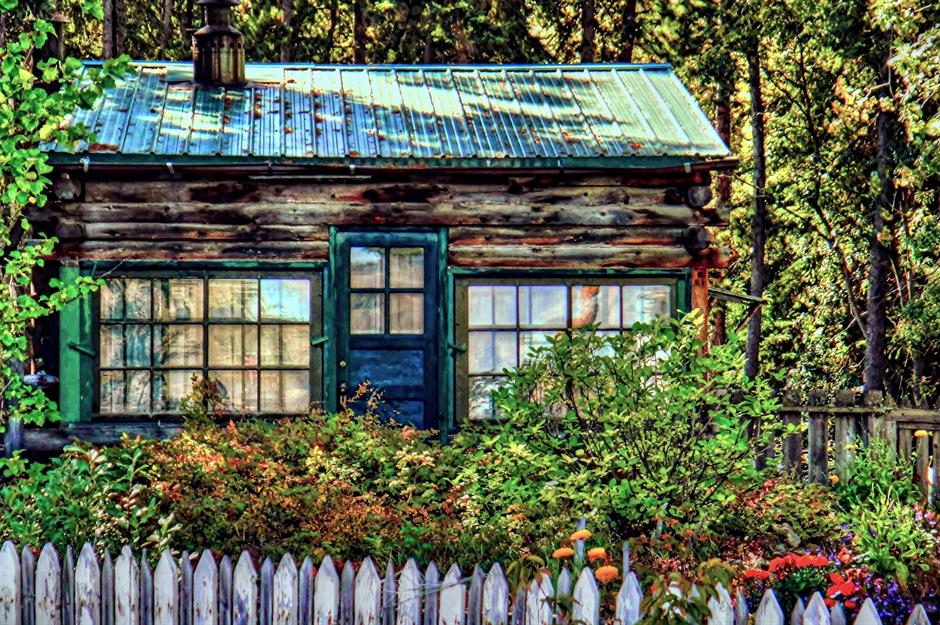 Nestled in a remote corner of a forest in the wild area of Yukon in Canada, this tiny cottage has seen better days. With nature taking over the building and what once would have been a quaint front garden, we can only imagine what it could have been like in its heyday with its curious blue front door. 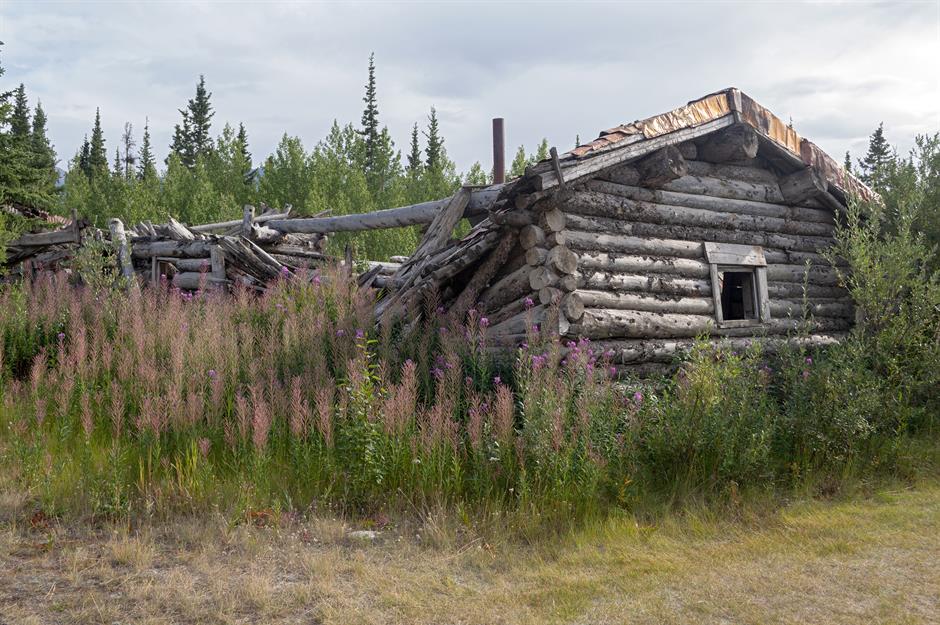 This hut in the ghost town of Silver City in Yukon, Canada, looks like it could tumble down at any moment! The settlement was thriving during the early 20th-century gold rush but has since been left deserted, with many of the buildings barely standing. Packed with abandoned cars and collapsed houses dating back over 100 years, the eerie town has been taken back by Mother Nature. 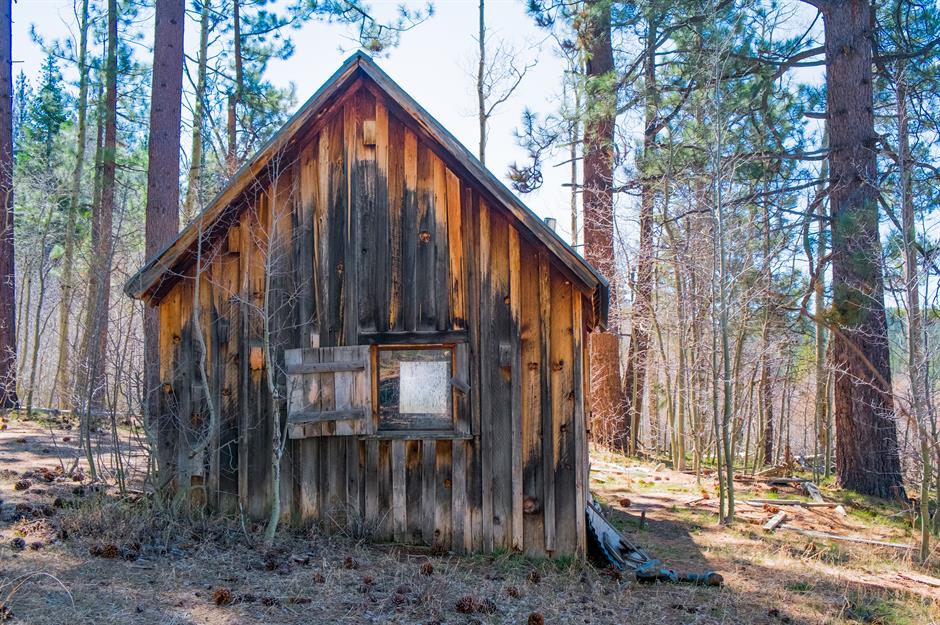 Dominic Gentilcore / Shutterstock
Once the home of local caretaker Charlie Fulstone, whose job was to watch over the local heard of cattle, this cabin was built in the 1920s but has long since lain empty, leaving the structure to crumble. Located along the Marlette Lake trail in Nevada, the old cattle fences still remain to this day. 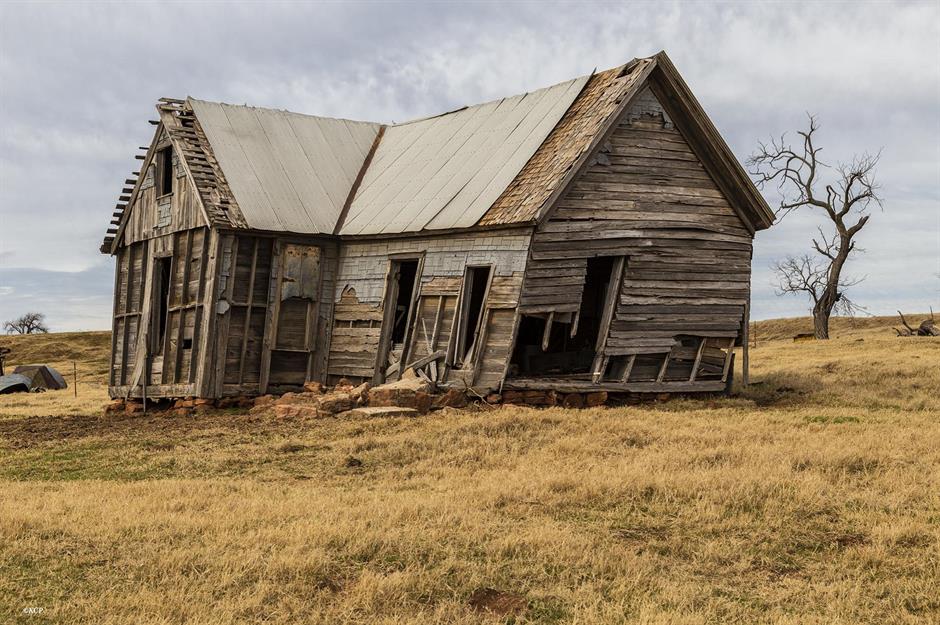 Left barely standing, this cabin has long been forgotten and is a home fit for a horror movie. Located in the wilds of Western Oklahoma, the foundation is supported by bricks that have gradually wasted away over the years of neglect, causing the home to become unstable.

Though it's hard to imagine today, this run-down villa in Vietnam would once have been a luxury resort home. Built in the early 1900s, the windows and doors of this once-idyllic lakeside home have been bricked up and the structure is slowly falling to pieces. 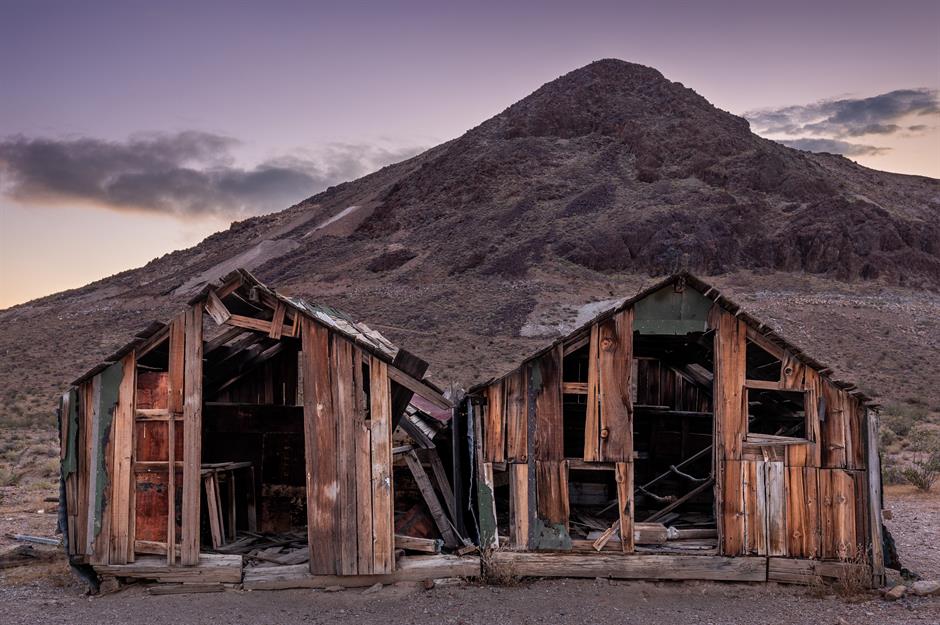 Roberto D’Antoni / Shutterstock
This pair of run-down tiny houses used to be part of the thriving mining town of Rhyolite in Nevada. Once home to a population of 5,000, the settlement was nearly abandoned in 1920, when just 14 residents were left. Today, the last few standing houses are completely empty and in a sorry state of disrepair.

Surrounded by picturesque mountain ranges in rugged Alaska, this tiny cabin sits lonely and abandoned by its previous owners. With mysterious debris littering the landscape around the property, we get the sense that something happened here. We wonder what made the former residents up sticks... 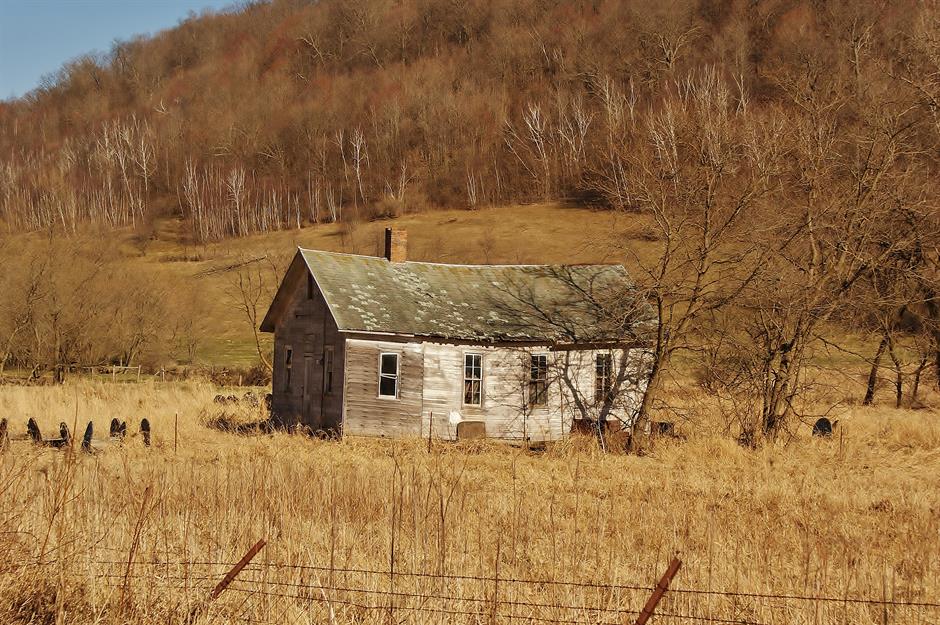 chumlee10 / Flickr (CC BY-SA 2.0)
Left to decay and fall apart, this rural hut sits in Wisconsin, USA. Surrounded by rolling hills and forests the wooden-clad tiny home is starting to sink in the centre after years of harsh weather and neglect. 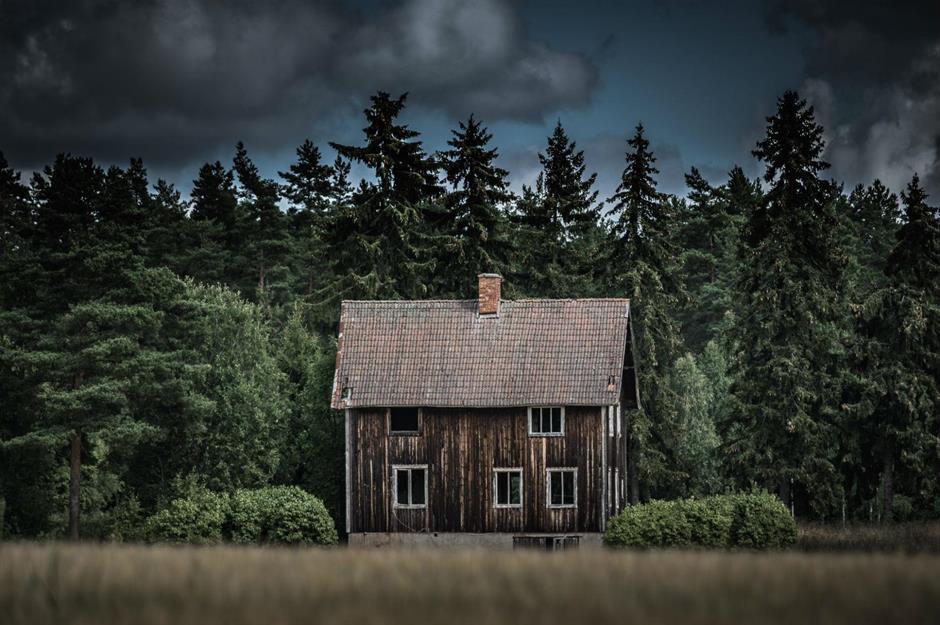 Standing empty and deserted, this spooky house looks like it's seen better days. Located in the middle of the Swedish countryside, it was abandoned by its previous owner for reasons unknown. With a little work, it could be the perfect spot for a weekend retreat, but in its current eerie and run-down state, it resembles an archetypal haunted house.