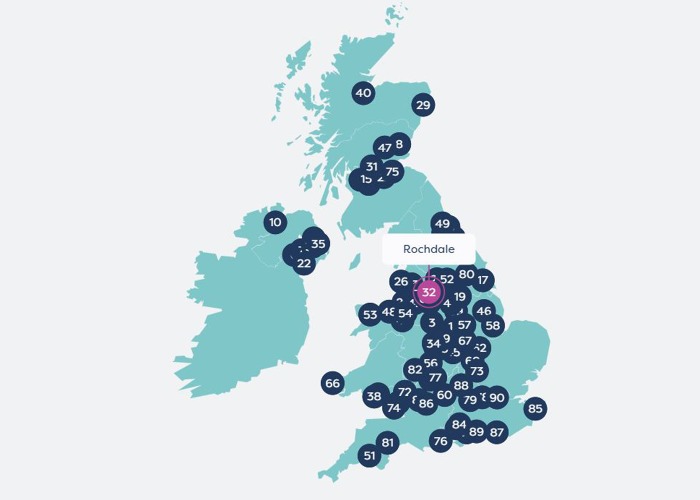 The ideal conditions – places where houses are affordable and rents low but wages are high – are mostly to be found in Scotland, Northern Ireland and Wales, according to new data by MoneySupermarket.

Their new Rent and Save hotspots tool, which looks at take-home salaries after the cost of living has been taken into account and compares them with average deposits, is broken down into three main search areas: the length of time it will take to raise a deposit, the minimum deposit required and the average local rent.

Ready to buy in three months

Paisley in Scotland is the place where residents can save for a deposit the quickest, with renters able to stump up the £6,037 deposit required in as little as three months, thanks to low monthly rents of just £351.

Close on its tail is East Kilbride, also in Scotland, where you could also get the £6,467 deposit in just three months, even with the slightly higher local rents of £385 per month.

READ MORE: This is what you can rent for £1000 in cities across the UK

In total there are eight towns and cities where you could raise a deposit in as little as three months, including Stoke on Trent in the East Midlands, Neath in Wales, Armagh and Craigavon in Northern Ireland, Hartlepool in the North East and Dundee in Scotland.

Where will it take the longest?

Conversely, the three places where it takes tenants the longest to raise a deposit to buy are Oxford and Chichester in the South East (12 years seven months and 17 years two months respectively) and London, where it will take an incredible 22 years and two months to raise a minimum deposit of £221,105 due to average monthly rents of £1595.

It’s not all bad news for those based in the capital though: the same research also found huge discrepancies in terms of how long it will take you to raise a deposit, depending on where you live in the capital.

Croydon was named the best place to rent if you want to save to buy your own property – if you're smart you could raise a deposit here in six years and eight months, way below the average timespan for the city.

Rachel Wait, consumer affairs spokesperson at MoneySuperMarket, said: “While Paisley has proven to be the fastest place to raise a deposit, there are options across the country that won’t take a lifetime to save up for – even in London, where Croydon couples can buy a house within seven years of saving.”

The 20 places you can raise a deposit the fastest